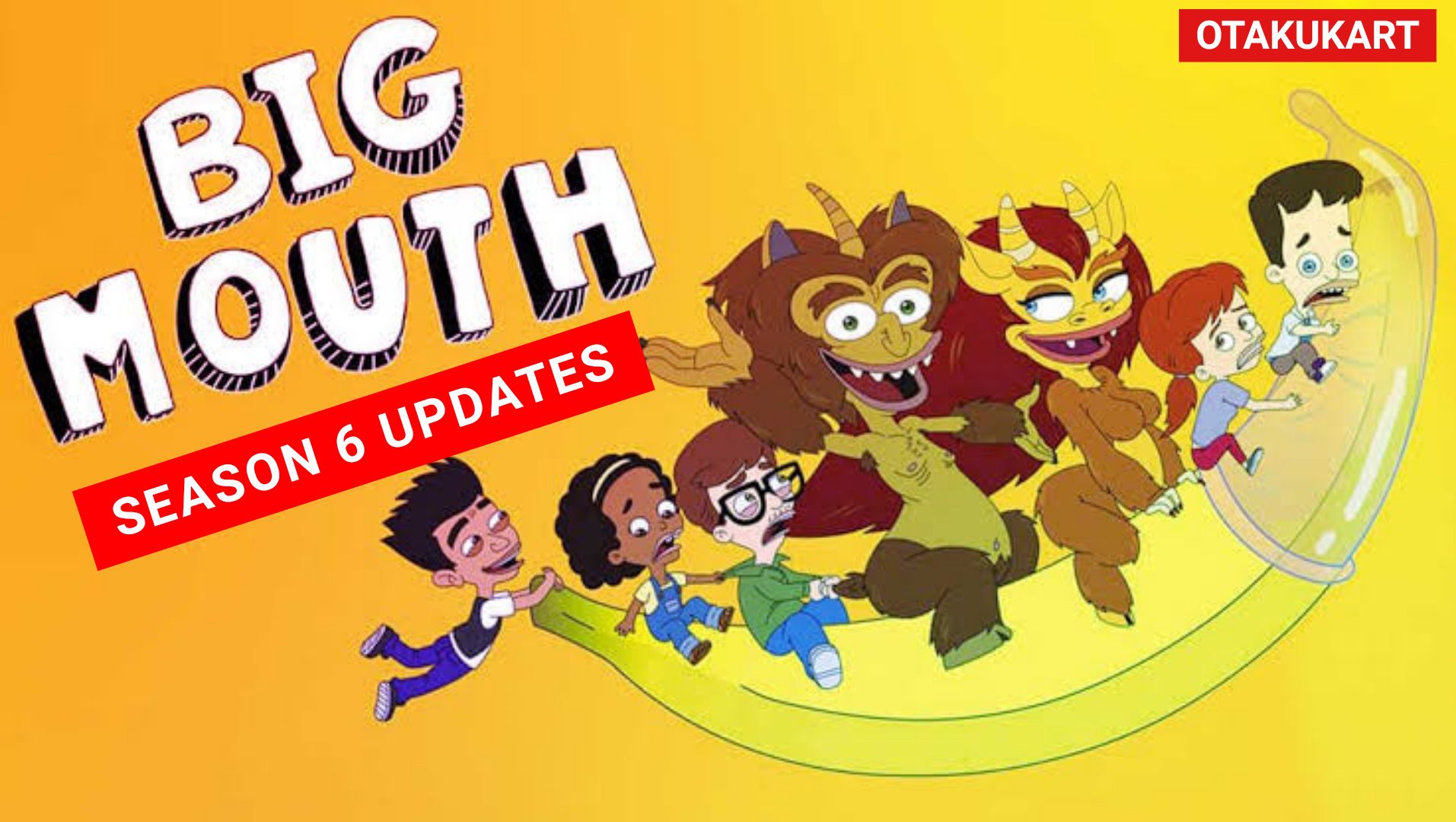 Even though Its latest season has been released recently, Fans of Big Mouth has already begun to start asking will there be a big mouth season 6. In this article, we will be answering the question will big Mouth have a season 6 as well as looking at if there is any big mouth season 6 trailer as well as big mouth season 6 cast and everything you need to know about the latest season of this American adult animated sitcom. Before we look at anything related to Big Mouth Season 6, let us take a quick look at what is this show is about. For those who don’t know, Big Mouth is an American adult animated sitcom created by Nick Kroll, Mark Levin, Andrew Goldberg, and Jennifer Flackett for Netflix.

The sitcom centers around teens based on Kroll and Goldberg’s upbringing while living in suburban New York. In this series, Kroll voices his fictional younger self. Big Mouth explores puberty while also embracing frankness about the human body as well as sex. The first season with a total of ten episodes was premiered on Netflix on September 29, 2017, and was followed by a second season on October 5, 2018. The third season was released on February 8, 2019, as a Valentine’s Day special episode. The fourth season was released on December 4, 2020, followed by the fifth season on November 5, 2021. 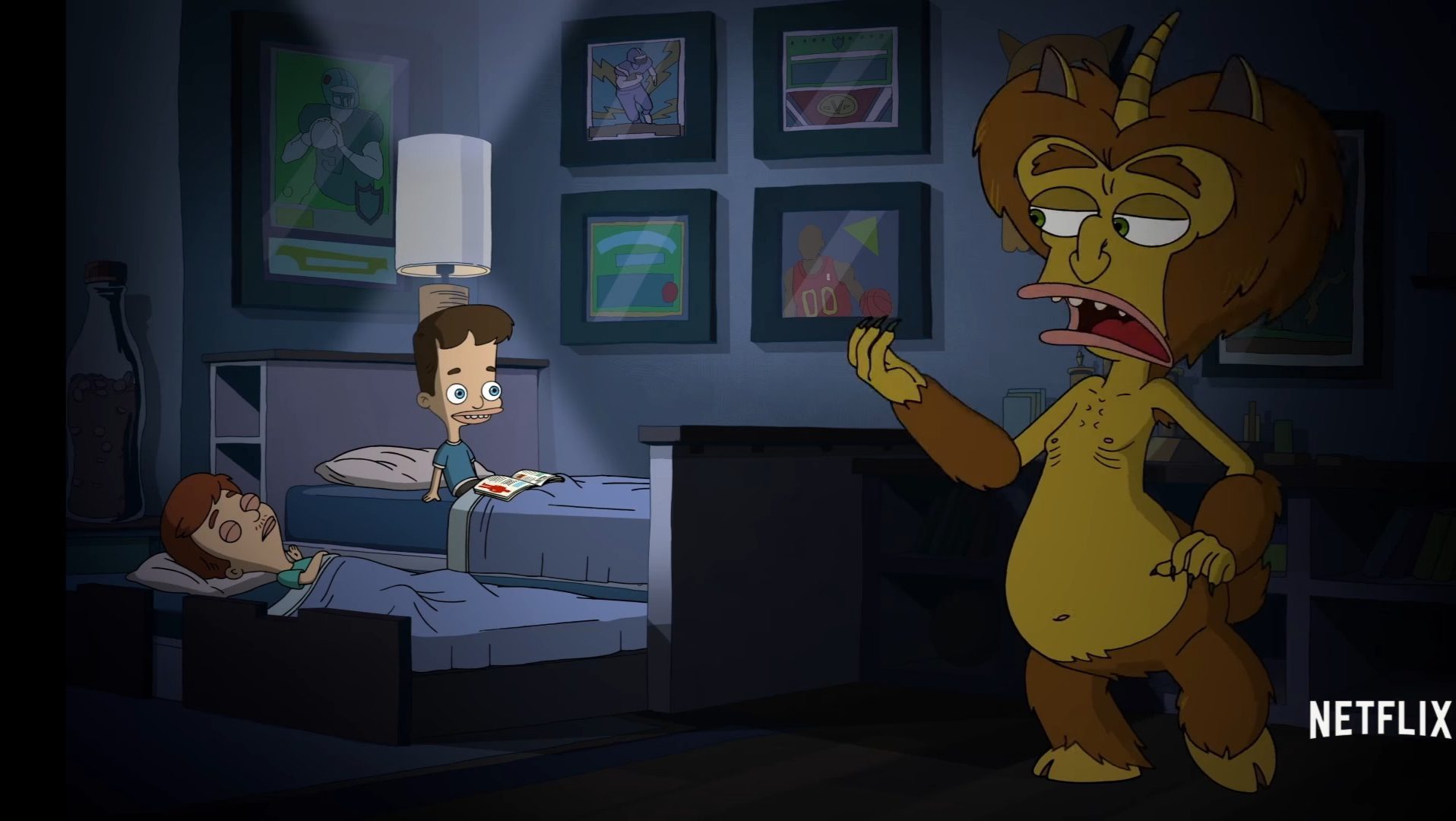 The sitcom centers around teens based on Kroll and Goldberg’s upbringing while living in suburban New York.

The plot of Big Mouth 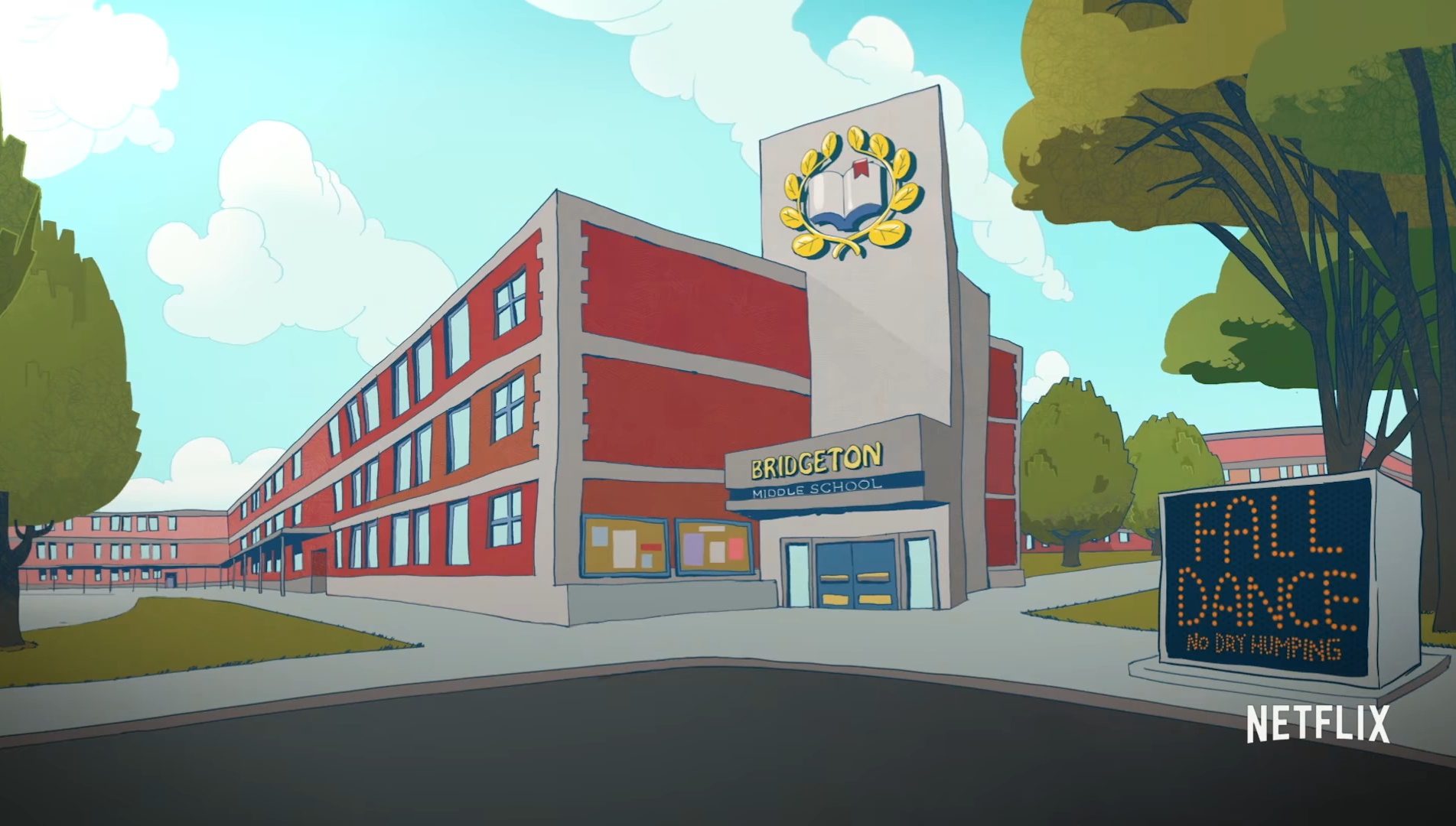 Big Mouth explores puberty while also embracing frankness about the human body as well as sex.

Sometimes even these objects can be seen offering helpful, even though confusing, advice for their puberty-filled lives. There even a ghost of Duke Ellington, a French-accented Statue of Liberty, a pillow that can get pregnant, a bar of Adderall, and even Jessi’s own vulva. All of these characters discuss how puberty has affected them both mentally and physically.

Is big Mouth getting a season 6?

Even though Big Mouth Season5 has just been released on the platform, fans of the show have already begun to ask about when is big mouth season 6 coming out. well, fans are in for good news as Netflix had renewed for Big Mouth until season 6 back in July 2019, even before the release of Season 3. 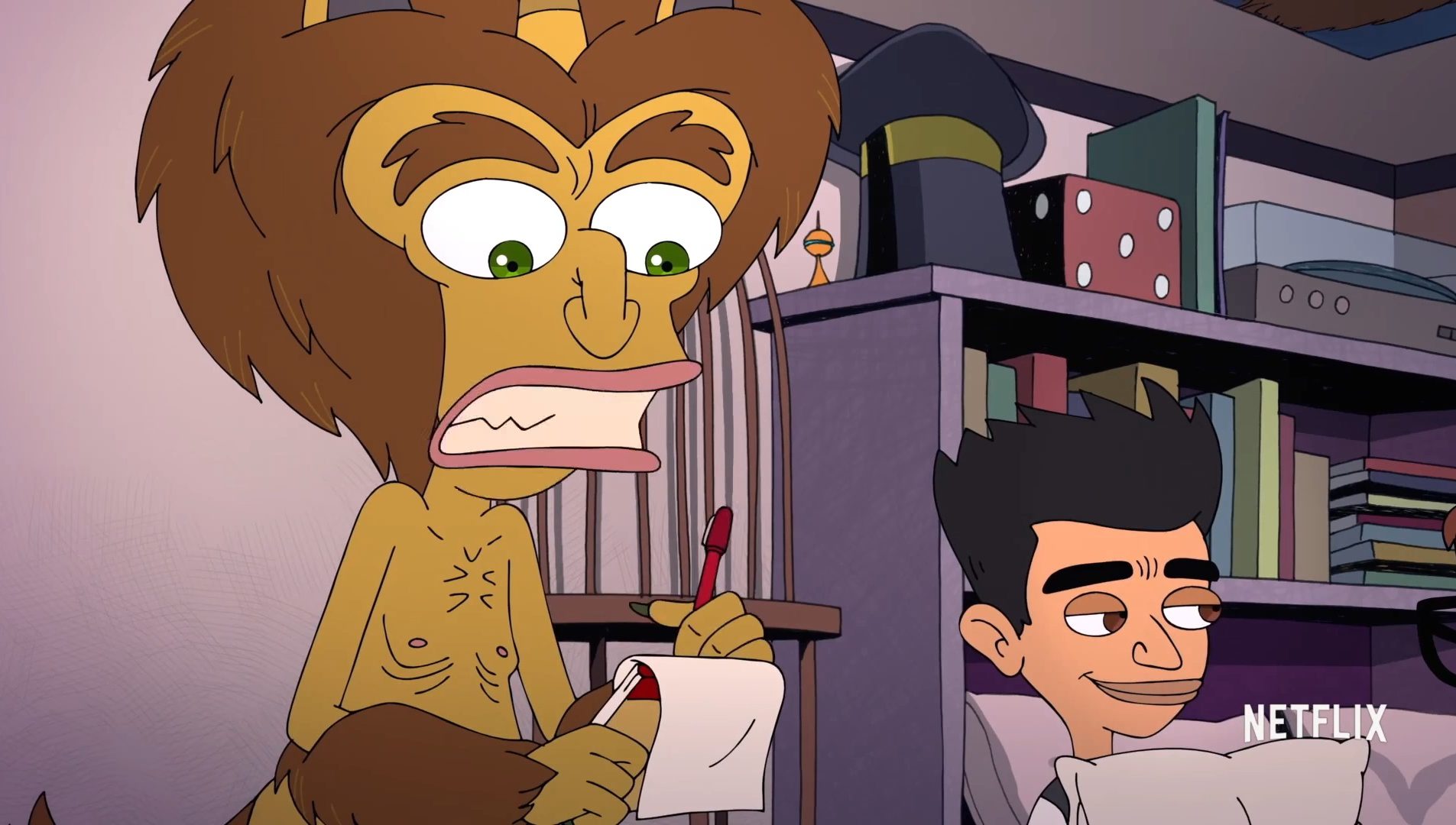 Throughout the show, we see over-sexualized shoulder angels, which are known as the hormone monsters.

As for the big mouth season 6 release date on Netflix, we still don’t know when it will be officially released. Since the show has been renewed till Season 6, we can expect that the show’s production may have already begun, and we may soon hear about the release date of Big Mouth Season 6 when the production ends.

Will Big Mouth End After Season 6?

While it’s great news to hear about Big Mouth coming for another season, some fans are afraid this will be the show’s final season. Not only that, but Netflix has also decided to greenlit a spinoff series titled Human Resources. It is expected that this show will follow the story of the hormone monsters and as well as various stories centered around their workplace. 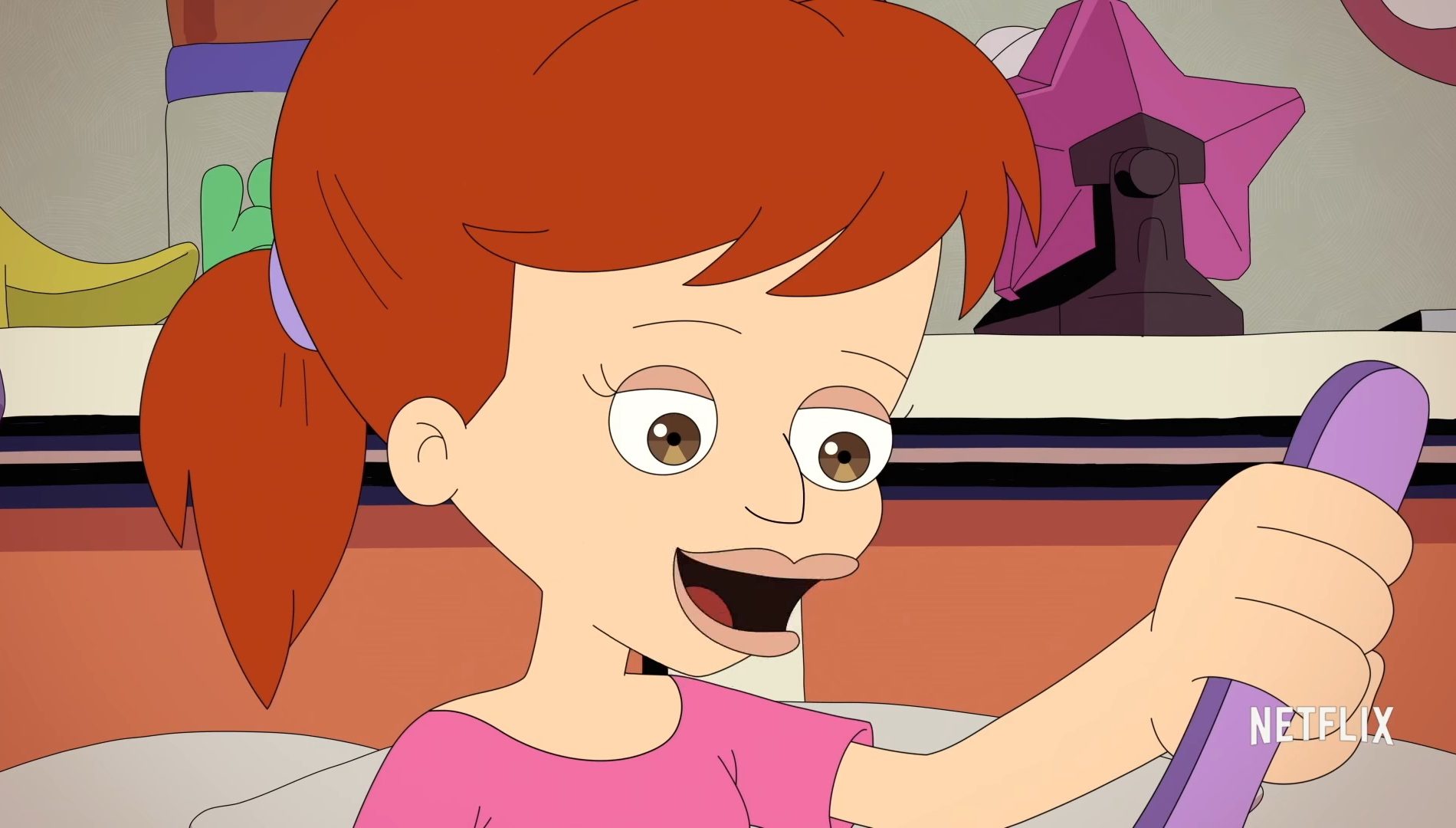 Throughout the series, we could see the kids interacting with people and objects who are often personified.

Since there is already approval for a spinoff, there might be a chance that Big Mouth may end with season 6 or may not last more than another season or two. Regarding the Human Resource release date, we think it will be only announced after the end of Big Mouth, or who knows, and it could run together with big Mouth.

What to expect in Big Mouth Season 6?

One can easily guess that the story of Big Mouth Season 6 will carry forward from the events of the previous seasons, especially from the last season. So let us look at what happened at the end of Big Mouth Season 5. By the end of the latest season of Big Mouth, we see Nick understand that all of the monsters and bugs were a part of him, and Missy can escape from her hate worm and then make amends with Jessi.

Meanwhile, Jay chose Matt over Lola, and by that, we see the season coming to an end. From big mouth episode 6, season 1 itself, we could see the continuation of Jay and Matt’s relationship, as well as Lola’s possible revenge since she didn’t let go of Jay, and as expected, we could see many struggles between Nick and Andrew with their respective bodies.

How many episodes will there be on Big Mouth Season 6?

Other than renewing the show and releasing the fifth season, Netflix hasn’t revealed much about Big Mouth regarding the number of episodes in Season 6. But when looking at the previous seasons, we could see that each season of Big Mouth only had a total of 10 episodes, apart from Season 3’s Special valentine episodes, which makes it a total of 11 episodes only for that season.

This means we can expect a total of 10 episodes in Big Mouth Season 6. Bit if it is a final season for the show, we could expect a bit more episodes our even releasing in two parts because that’s the trend followed currently. Until we can get any kinds of official confirmations, these assumptions can not be taken fully trusted.

Like Big Mouth Season 6 release date, we are still not sure who will come to the next season of Big Mouth. Even so, let us look at the cast of Big Mouth. Nick Kroll voices himself in the series as Nicholas Arsenio “Nick” Birch, an adolescent boy living with his overprotective parents, older brother Judd and an older sister named Leah. 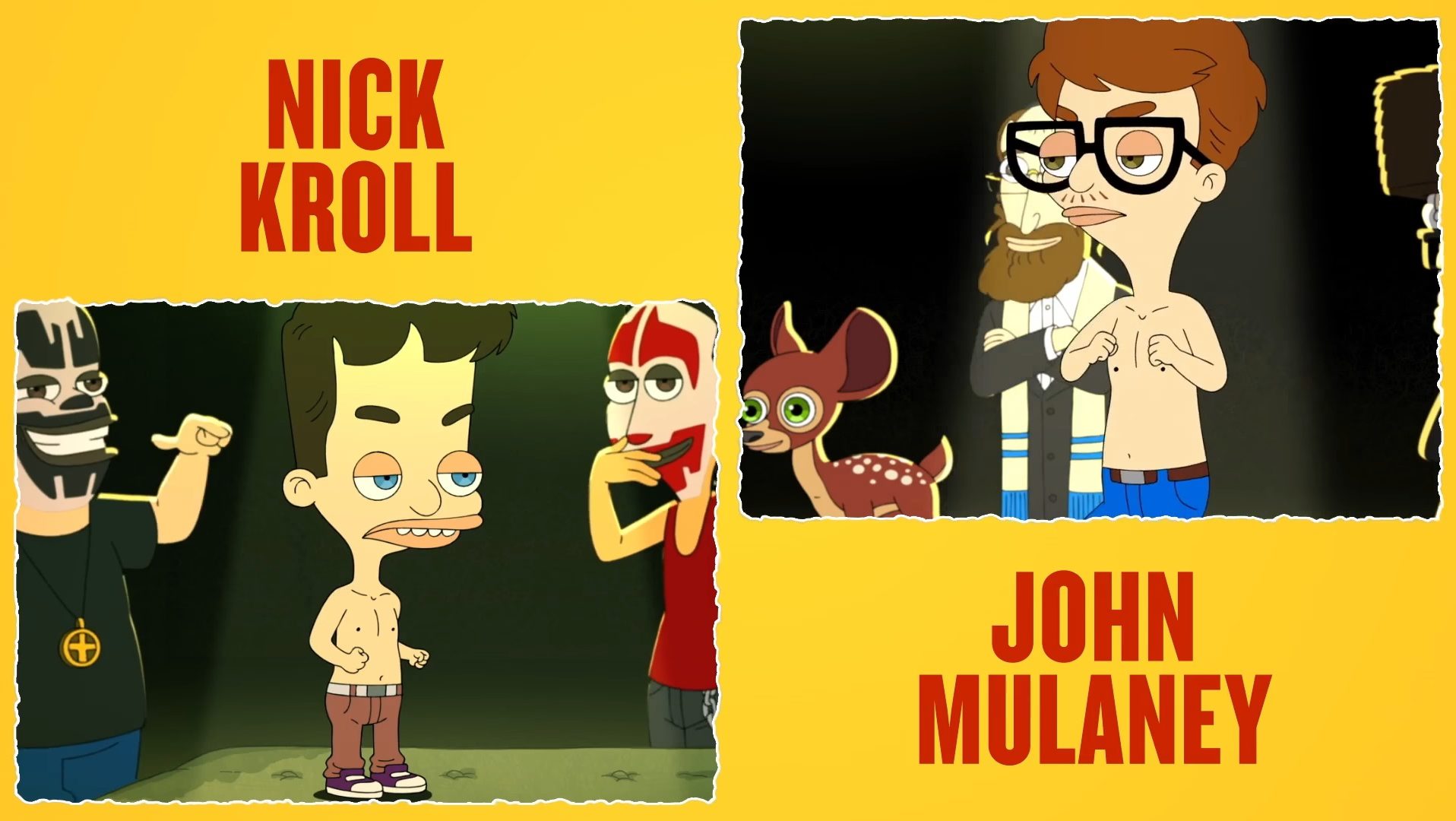 Nick Kroll voices himself in the series as Nicholas Arsenio “Nick” Birch, an adolescent boy living with his overprotective parents, older brother Judd and an older sister named Leah.

Throughout the series, we can see Nick’s insecurity about his masculinity as well as his overall development. Later in the series, it becomes clear that he was a late bloomer when compared to his friends. Eventually, Nick learns to appreciate his body and emotions, thanks to the help and support from his loved ones and a few others.

Nick Kroll also voices for Maurice the Hormone Monster, which is also known as “Maury”. Maury is a raspy-voiced monster who is always around Andrew and is responsible for grooming his sexual desires. Other than Andrew, he also interacted with other boys, including Nick, Jay and is also Matthew’s hormone monster. 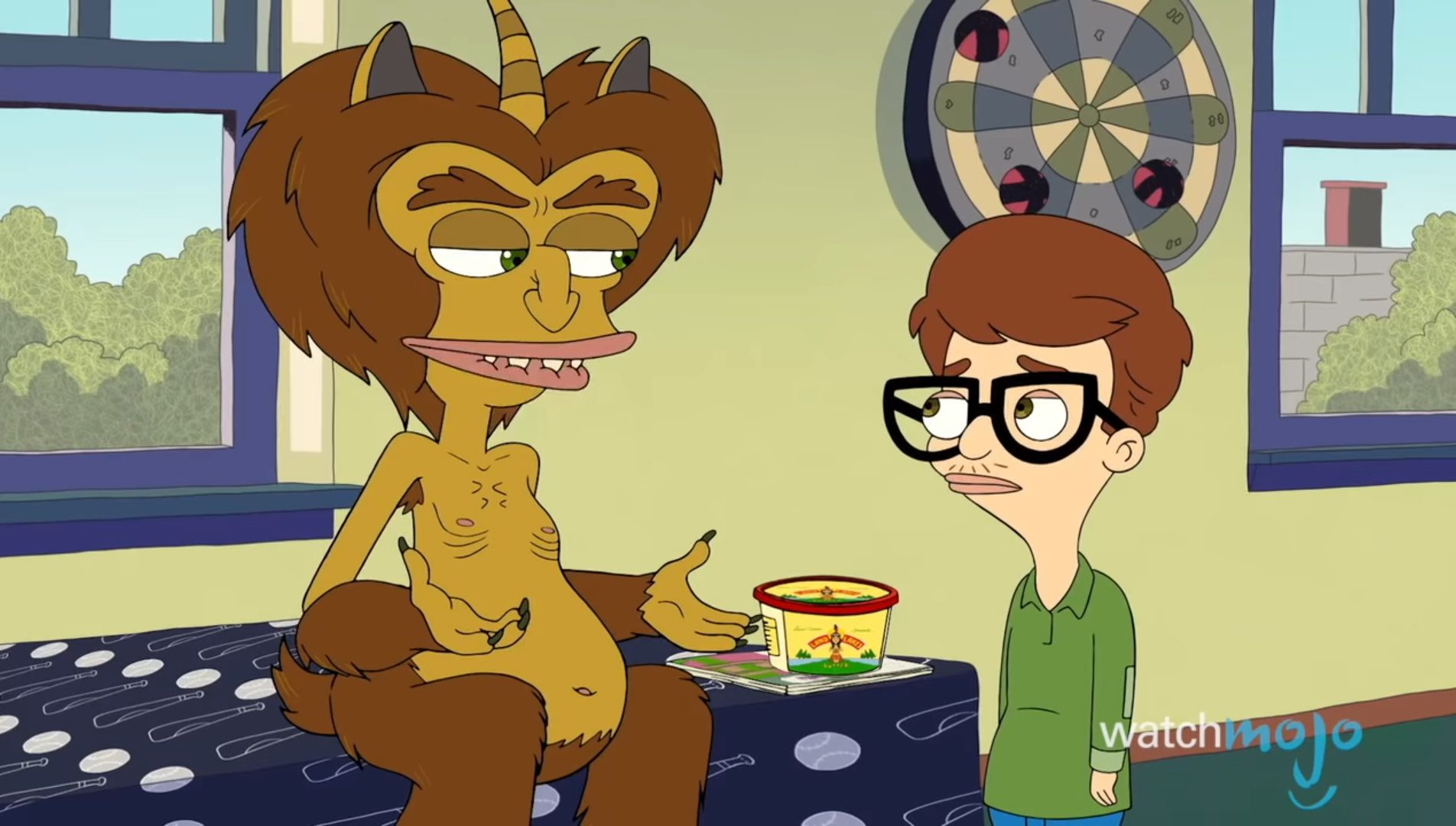 Nick Kroll also voices for Maurice the Hormone Monster, which is also known as “Maury”.

Nick Kroll was also the voice behind Coach Steve Steve, an overly talkative incompetent shrill-voiced middle school gym class teacher who often tries to get his colleagues and students to hang out. He was the only character that was not affected by the Shame Wizard because he was incapable of experiencing shame. In Season 3, we could see him with various jobs, but eventually, he gets his job back as a gym coach.

Rick, the Hormone Monster, voiced by Nick himself, Rick is an old, dysfunctional yet enthusiastic hormone monster who has been with Coach Steve and then gets with Nick. Lola Ugfuglio Skumpy is an ill-tempered popular girl who fears losing her social status and the approval of her best friend, Devin. She was in a relationship with Jay, but things didn’t go well. 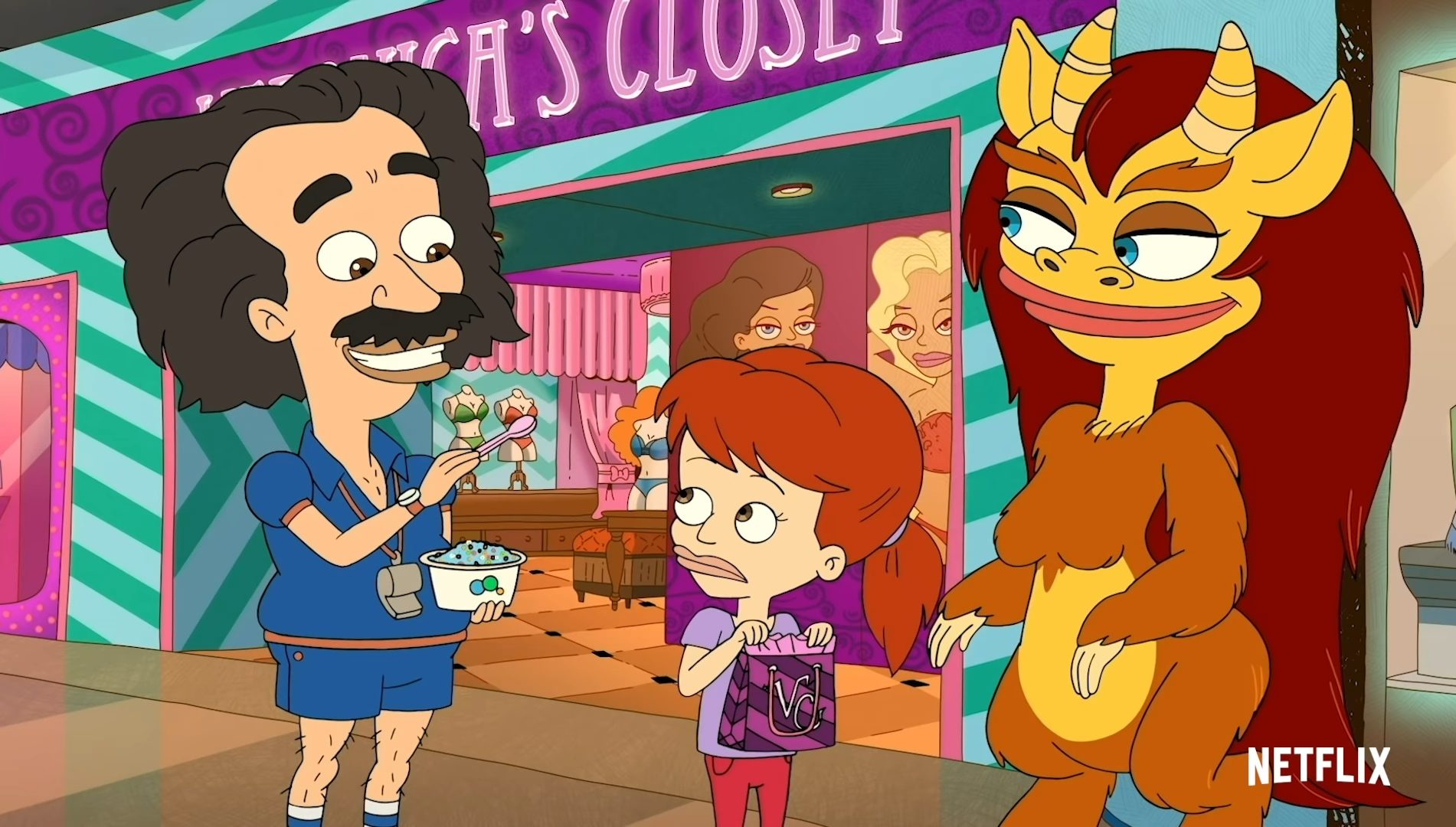 Nick Kroll was also the voice behind Coach Steve Steve, an overly talkative incompetent shrill-voiced middle school gym class teacher who often tries to get his colleagues and students to hang out.

Nick Starr, a future version of Nick who hosts a game show. He lives with a robot version of Andrew. Besides these characters, Kroll is also the voice of Mila Janssen, Lotte Janssen, Statue of Liberty, the profane ladybug, Joe Walsh, the ghosts of Picasso, Richard Burton, Sylvester Stallone, the webcam girl, Gina’s Abuela, Rabbi Poblart, and Bad. In the Season 5 finale, Kroll also appears as a live-action version of himself as the person in charge of Human Resources.

Other than a lot of characters voiced by Nick Kroll, there is also John Mulaney who voices for Andrew Glouberman, a young boy and Nick’s best friend. Andrew has always been annoyed by his dysfunctional family. John also voices for Mint, Detective Florez, Grandpa Andrew, and Babe the Blue Ox.

Jessi Klein “Jessi” Glaser is a sarcastic and smart girl who lives with her unemployed and stoner father and a mother who has a relationship with another woman. Besides voicing her character, Jessi Klein has also voiced for Jessi’s possible ancestor, Margaret Daniels. 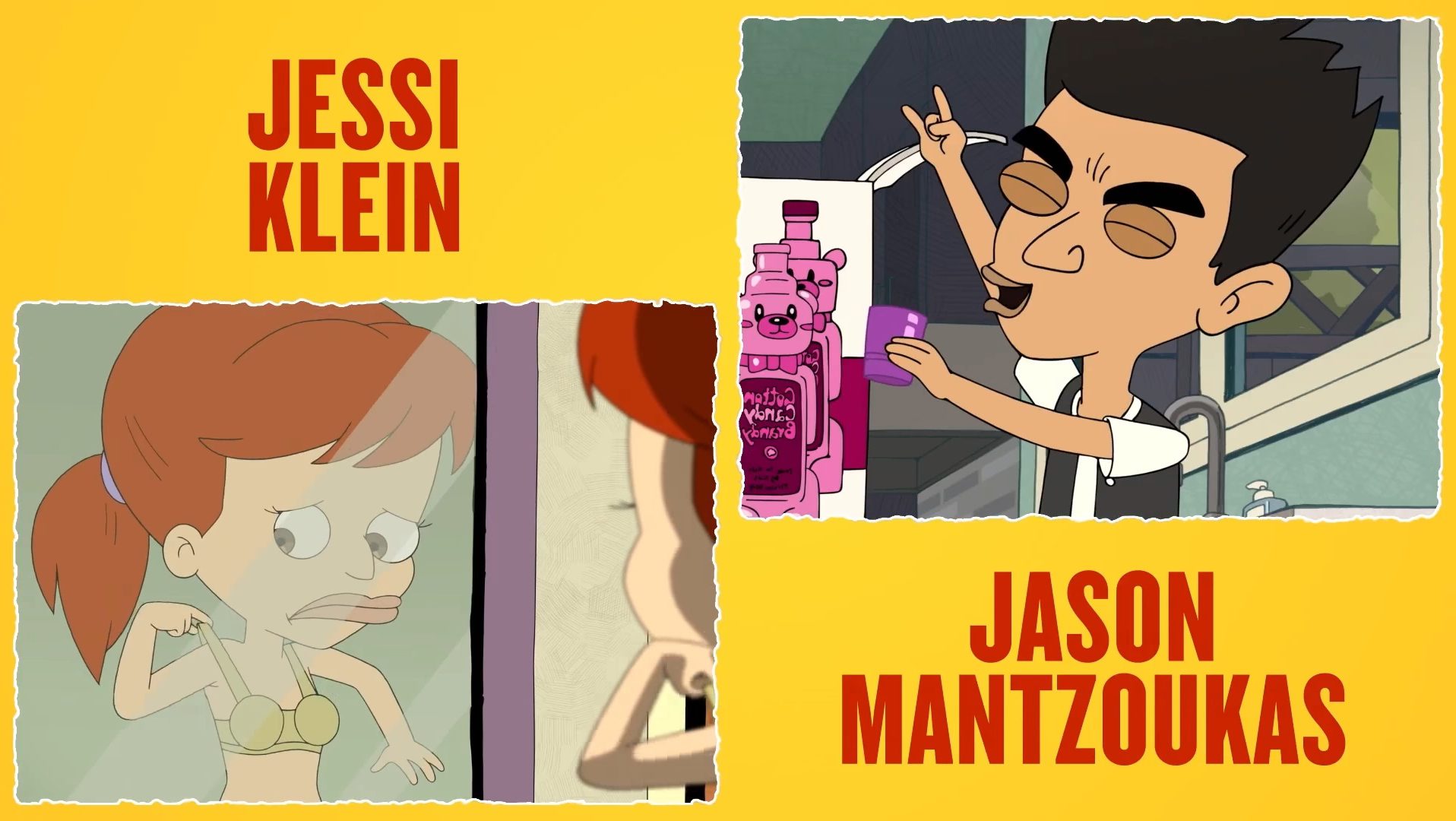 Jessi Klein “Jessi” Glaser is a sarcastic and smart girl who lives with her unemployed and stoner father and a mother who has a relationship with another woman.

Jason Mantzoukas as Jayzerian Ricflairian “Jay” Bilzerian, Jay, is a teenage boy obsessed with magic which gets under the coaching of Coach Steve. He lives with his mother and two older brothers, Kurt and Val, who always bullies Jay, and his dad, a divorce lawyer.

Jay often has the habit of quoting his father’s law commercials, thus making his friends annoyed and making them stop him from doing that. Looking at N, Jay is obsessed with nick’s family, and Jay always wanted some like Nicks mother and father as his parents when Jay happens to kiss an openly gay boy in school, in season 2 during a game of Smooch or Share.

After this incident, it made him question his sexual orientation, and throughout season two and at some point in Season 3, he was confused about his sexual orientation. By the end of Season 3, he realizes that he is bisexual. Later, Matthew break’s up with Aiden because of his feelings towards Jay, and eventually, they both decide to go to Devin and Devon’s New year’s party together.

Jason also voices for Guy Bilzerian, Jay’s dad, as well as the ghost of Socrates. As for Melissa “Missy” Foreman-Greenwald, Jenny Slate was giving voice to her until season 4. From Season 4 onwards, it was Ayo Edebiri who has been giving voice to the character.

Missy is a nerdy and kind girl which Andrew has an affection for. She sometimes has trouble relating to her peers since she lived in an upbringing and general naiveté. From season 3, she began to be mature more, thus gaining her own hormone monster called Mona. 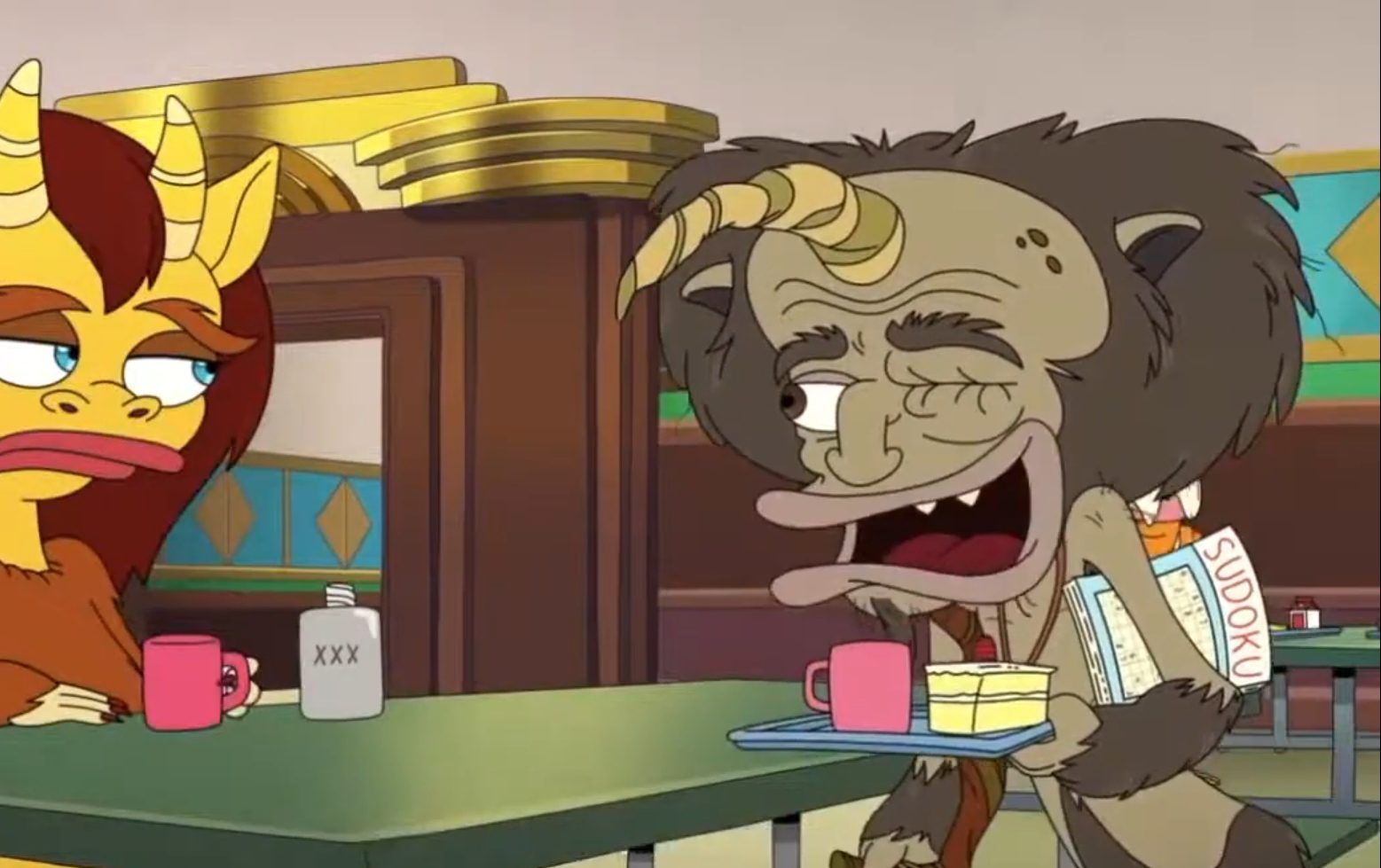 Rick, the Hormone Monster, voiced by Nick himself, Rick is an old, dysfunctional yet enthusiastic hormone monster who has been with Coach Steve and then gets with Nick.

By the 4th season, Missy begins to explore more deeply into her African-American heritage. Jenny also voiced for Mirror Missy, Missy’s abusive reflection, which usually represents the insecurities over her body. Jenny is also the one behind the voice of Vicky, Cherry’s delinquent friend.

Maya Rudolph voices for Connie the Hormone Monstress. Connie initially follows Jessi and sometimes Missy and encourages them to embrace their wildest desires. By the end of the second season, Connie becomes Nick’s hormone monster, which works well with them both despite being a boy. 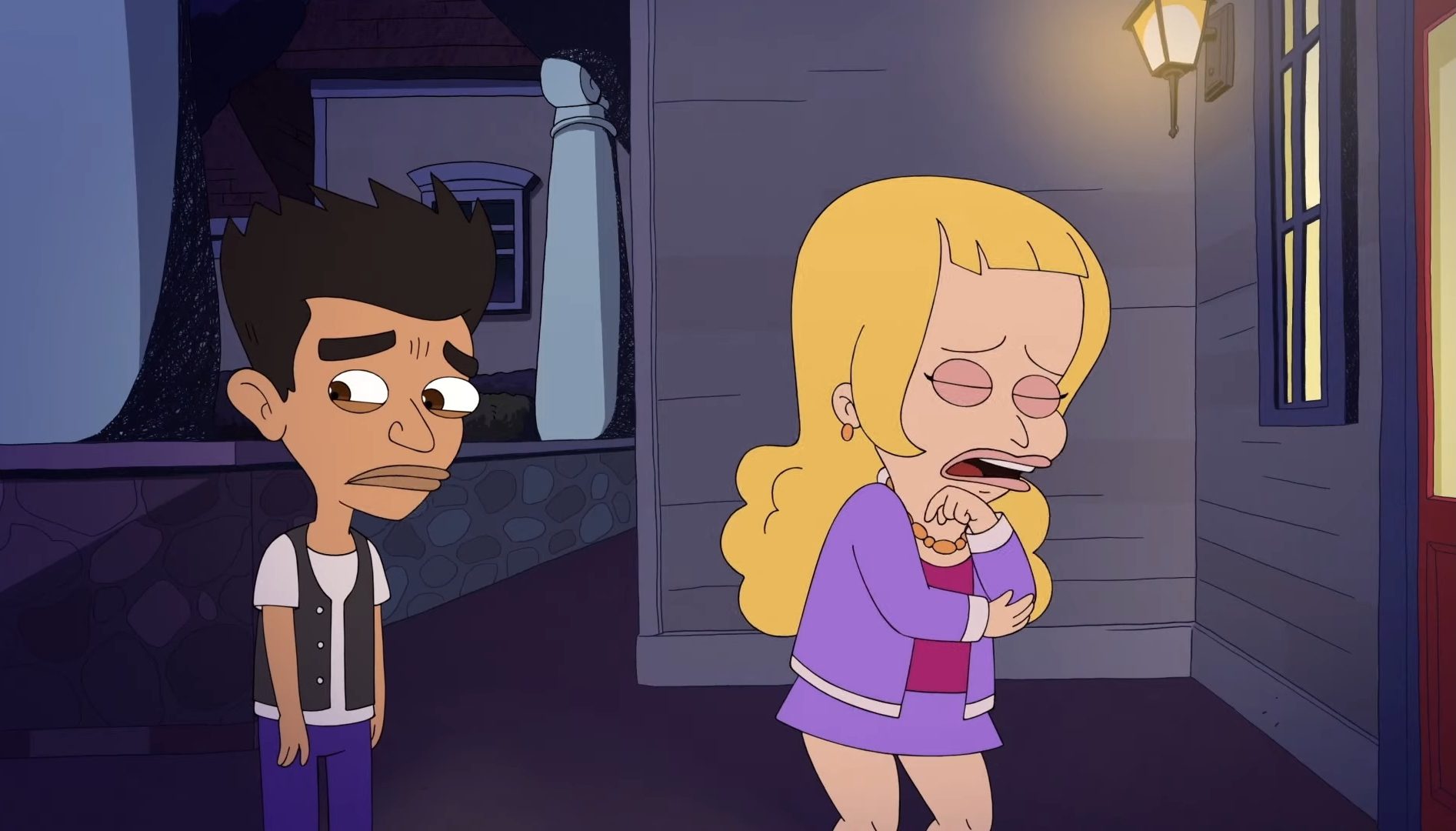 Lola Ugfuglio Skumpy is an ill-tempered popular girl who fears losing her social status and the approval of her best friend, Devin.

Other characters voiced by Jordan include David Bowie, Atlanta Claus, Missy’s father Cyrus, Patrick Ewing, one of the Knights of St. Joseph, and also Santa Claus. Andrew Rannells for Matthew MacDell. Matthew is a flamboyantly gay student and is dating Aiden, but the relationship breaks off by the end of season 4. During season 5, Matthew ends up with Jay. We need to wait until Big Mouth Season 6 to see if this relationship will last or not.