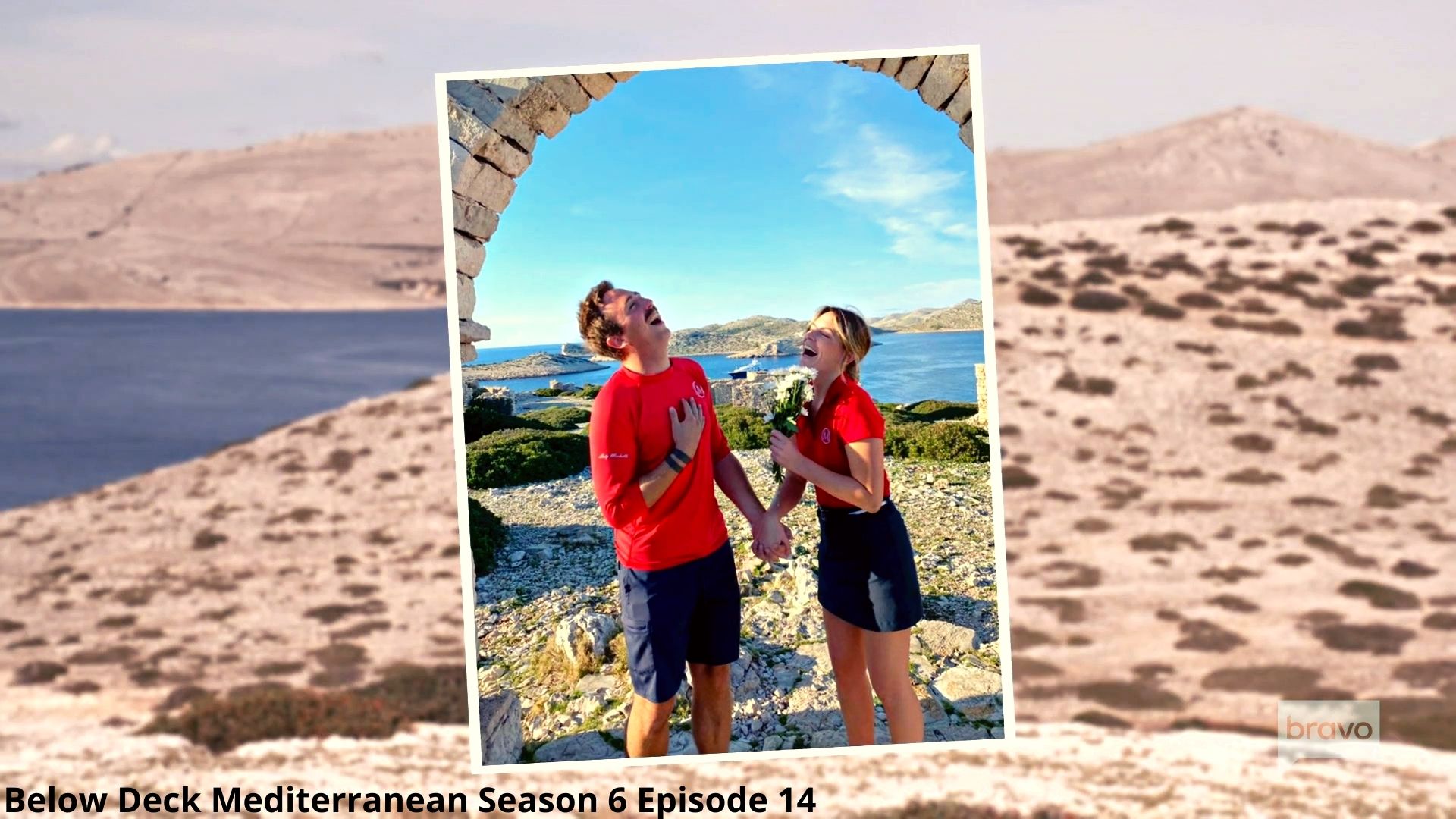 The release of Below Deck Mediterranean Season 6 Episode 14 is only a few days away. The American reality television series has been quite a hit among the list of other reality television shows. It first premiered on 3rd May 2016 and gradually started gaining popularity. The show also attracted a lot of fans due to the fact that it was a spin-off of the original series titled “Below Deck”. The original series first came out in the year 2013 on 1st July. The series garnered a lot of viewers as it progressed further and that intrigued the showrunners and the producers.

The success of “Below Deck” inspired the producers and showrunners to get working on the idea of a spin-off. They finally came out with the series after setting up an idea of how to make the spin-off more interesting to attract new viewers and keep the old ones from the original show. The show features some actors who join each other on a big yacht to work as crew members. They all have to work together in sync to work round the clock to attend to their respective responsibilities. In addition to that, they are joined by some guests members for a couple of days.

The crew members work to maintain the yacht, cook food for the guests, prepare new and interesting activities for the guests. All of this brings in a lot of adventure and drama as well that keeps the viewers intrigued and hooked to the show. The audience is always excited for the next episode in the season, especially when an episode hangs on a certain twist. With all of that success over the years, we have now reached closer to the release of Below Deck Mediterranean Season 6 Episode 14. However, let us find out more about the show. 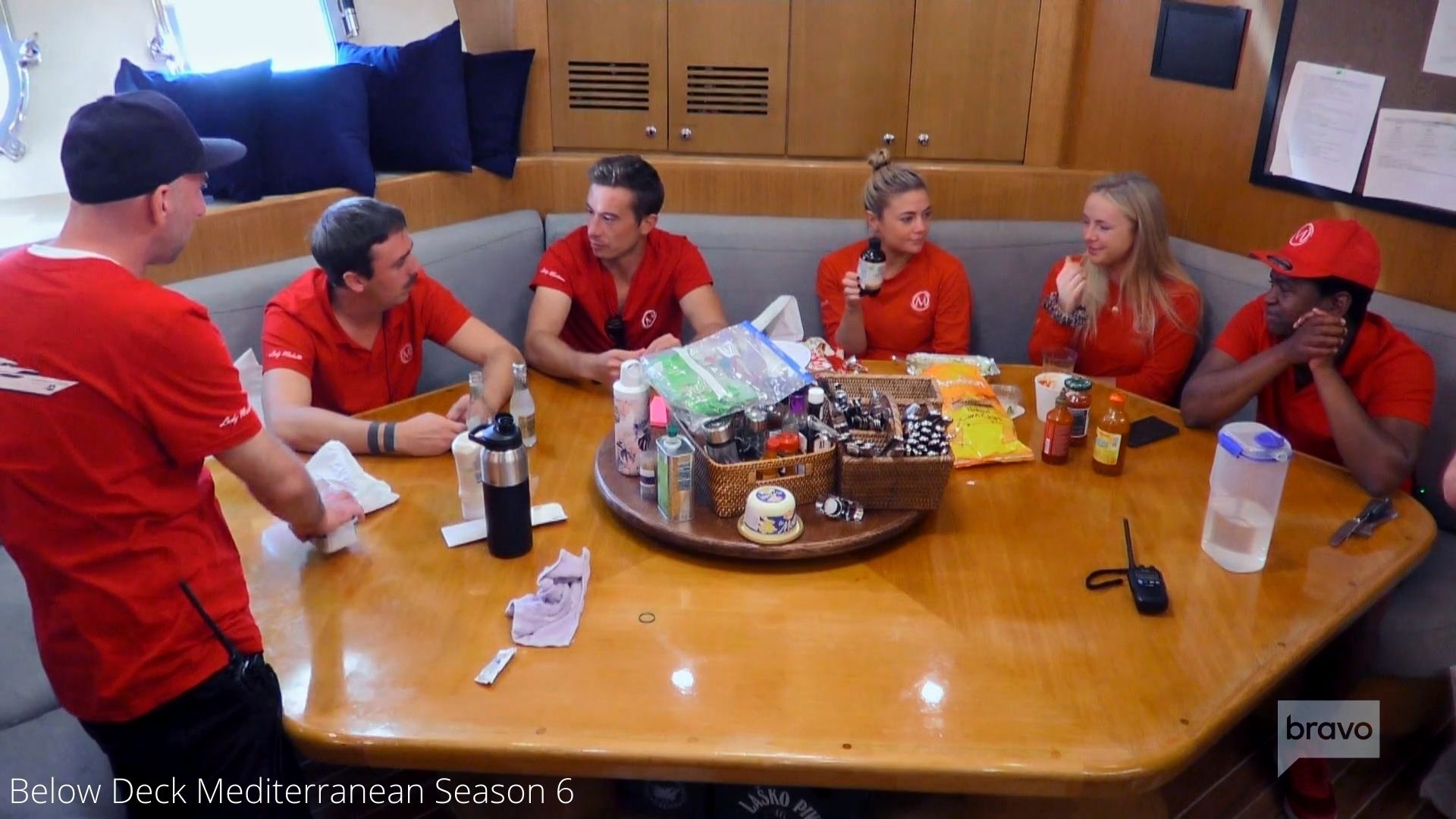 Who Are The Cast Members Of Season 6?

The cast of Below Deck Mediterranean has featured different cast members every season. In addition to that, there have been new faces joining the crew in between the season as well. However, the captain of the ship has been the same since the second season. Sandy Yawn joined the series in Season 2 as the captain of the ship, taking over the role of Mark Howard who was the captain in Season 1. Other than that, most of the cast members have been changing with the beginning of every new season.

However, there have been some cast members that have returned for more than one season in the series. Malia White is one of those cast members who has joined Below Deck Mediterranean Season 6 after being in the fifth season as well. Other than her and Sandy, all of the other cast members are new to the season. Mathew Shea, Katie Flood, Lexi Wilson, Courtney Veale, Delaney Evans, David Pascoe, Lloyd Spencer, and Mzi Dempers are the other cast members on the yacht.

David, Lloyd, and Mzi work as Deckhand, meanwhile Lexi, Courtney, and Delaney work as Stewardess, Katie is the Chief Stewardess, whereas Mathew and Malia are Chef and Bosun respectively. However, Delaney was brought in between the series for extra help. Therefore, she only stayed on the yacht for episodes nine to twelve and left after finishing her duties. On the other hand, Lexi also departed from the season in the thirteenth episode. But what was the reason behind her exit? Let us find out about that in the recap of Season 6 Episode 13.

Also Read: Below Deck Mediterranean: Who Is Malia’s Boyfriend After She Broke Up With Tom?

Episode 13 of Below Deck Mediterranean Season 6 was released on 20th September 2021 at 9 pm PT and ET. In addition to that, the episode was titled “A Hard Day’s Night” and went live on the popular American television network Bravo. The episode instantly began with a lot of drama among the crew members who were out at a dinner party. It all continued from the events of Episode 12 where the crew members got some time off for themselves before the next charter begins.

They were partying and having lots of fun until it all started getting bad for everyone. A big fight broke out between Lexi and Mathew during the dinner outing at the end of Episode 12. That continued further at the beginning of Episode 13. Their fight started to ruin everyone’s night as they were taking it too far. However, Lexi crossed the limit when she said that Mathew’s parents should have aborted him. This statement stuck with everyone and it definitely took away any chance of her getting support from any of the crew members. 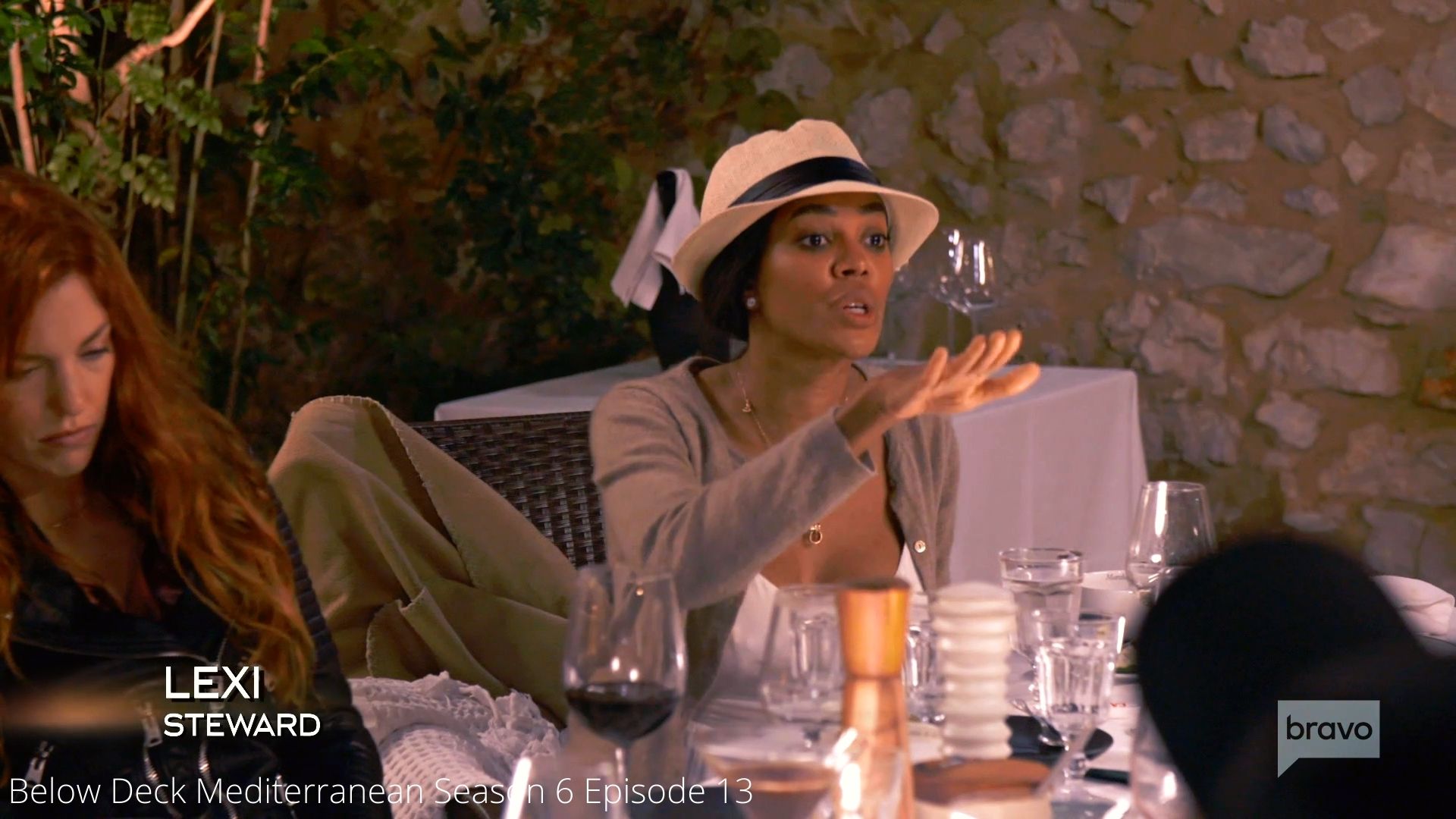 Furthermore, she called Mathew other hurtful things like he is very poor and used curse words against him. Mathew was also not clean by any means, however, Lexi took it too far with her statements. Before the dinner wrapped up, she even fought with Courtney who was trying to make her realize that she has crossed a limit. Although, Lexi was in her own mood and did not listen to anyone no matter what they said. Eventually, everyone sided with Mathew as most of them went along with him in one of the vans. Meanwhile, Delaney and Malia sat with Lexi in the other van, but it seemed like they had no choice as the other van was full.

What Happened With Lexi and Mathew? What Did Captain Sandy Decide?

Everyone arrived back to the ship and started discussing all that went down. On the other hand, Lexi was lying in her bed talking to her mom on phone and telling her everything. Furthermore, she continued bragging about how rich she was, and being with poor people around her is below her standards. The next morning, Katie decides to report the incident to Captain Sandy as this is an important issue. She tells her everything that happened between Lexi and Mathew and how the crew members are not supportive of Lexi.

Sandy calls Mathew and Lexi and sits them down for a talk along with Katie present there. After all the discussion, she further calls Courtney and Malia for their opinions. Sandy then reaches the conclusion that the crew members are not happy with Lexi in general and are not willing to work with her. Therefore, she makes a tough decision and lets her go. However, Sandy talks to Mathew as well and asks her to keep a check on his behavior as well. 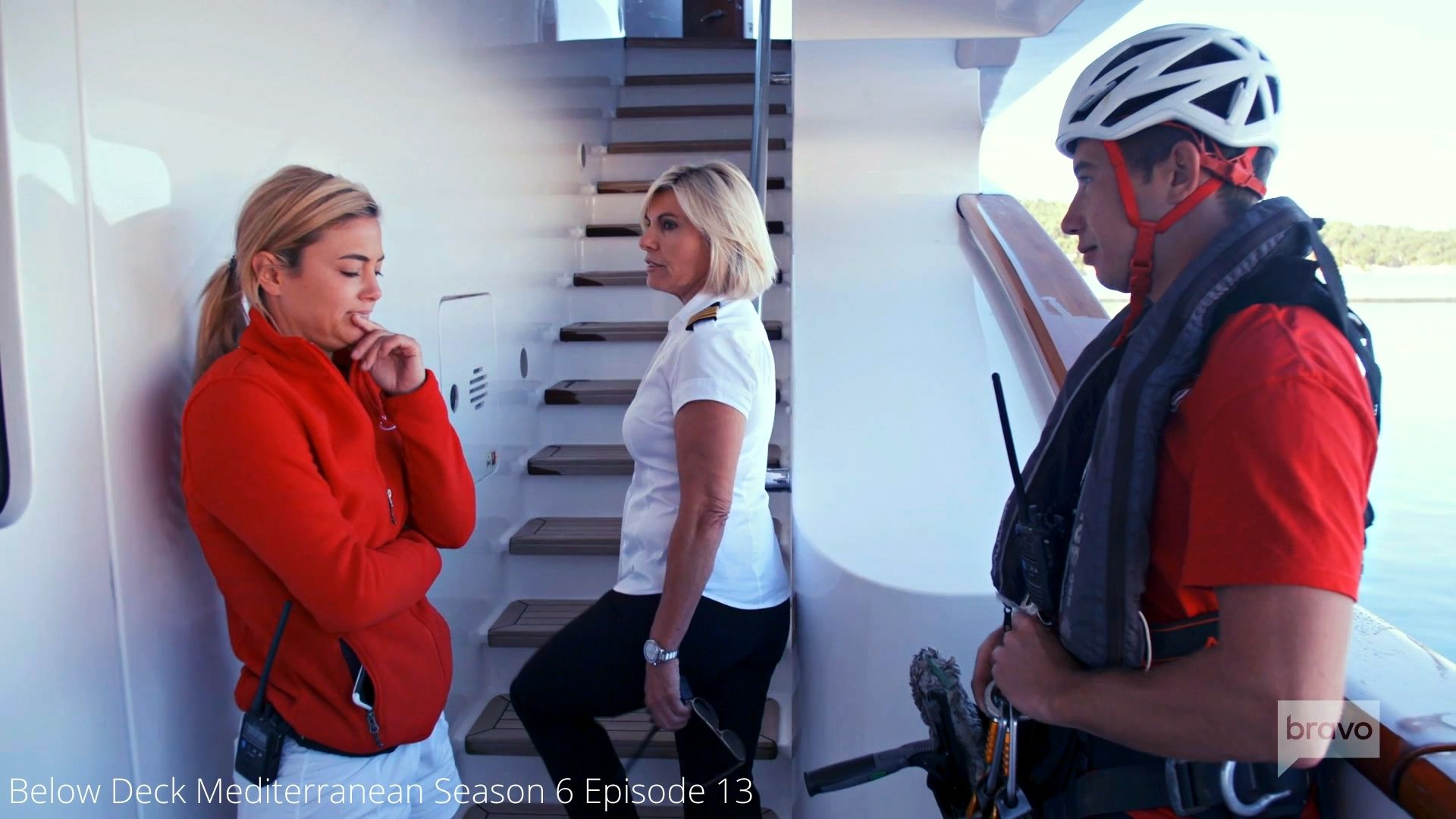 The next charter is getting closer with a few hours left and they receive the schedule for it. Sandy sits with Katie, Malia, and Mathew to discuss the clients, their needs, and everything else along with it. On the other hand, we see Katie decide that she would not bring in a new Stewardess at this stage. The crew is cleaning up the ship and getting everything in order and ready for the guests to arrive. However, Sandy learns about David’s leg injury and gets angry with Malia. She scolds Malia for not reporting his injury to her immediately as he is now a liability for the boat. The episode ends with Sandy asking Malia to stop making excuses about why she did not inform her and get back to her job.

Below Deck Mediterranean Season 6 Episode 14: When Will It Release and What To Expect?

We already saw a lot of drama and tension in the previous two episodes and it is not getting any less in the next one. Below Deck Mediterranean Season 6 Episode 14 is going to release on 27th September 2021 at 9 pm ET and PT. In addition to that, the episode is going to be titled “All I Need Is A Miracle” and will be airing on the Bravo television network on Monday. The upcoming episode is going to be another exciting and intriguing episode with lots of adventure and drama.

We will see Mathew putting in extra effort and work so that he can impress Captain Sandy and get in her good books again. Especially after what happened between him and Lexi and how Sandy learned about him wanting to give an ultimatum to her. On the other hand, we will see Katie and Courtney struggling to cope up with the pressure of handling the Stewardess work all by themselves. Katie might even regret her decision of not getting another Stewardess at some point in time. 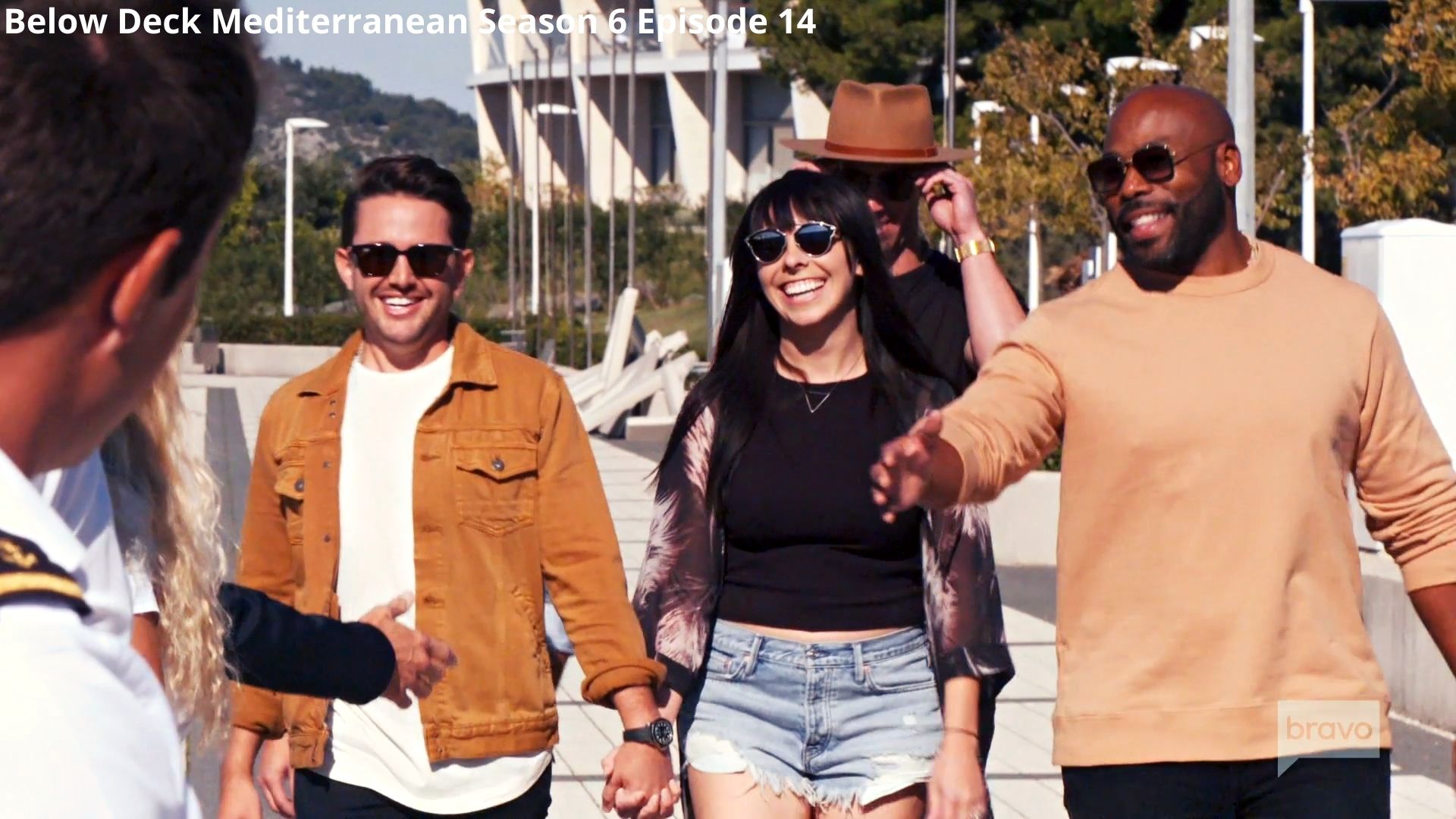 The new guests will also arrive with much excitement for their journey ahead. Meanwhile, Malia will also be under pressure when some amateur mistakes are made on deck. The next episode will definitely be worth the watch just like the other episodes. The viewers who want to stream the previous episodes of this season and other seasons as well can head to Amazon Prime Video. It will be available on the official website of Bravo as well.