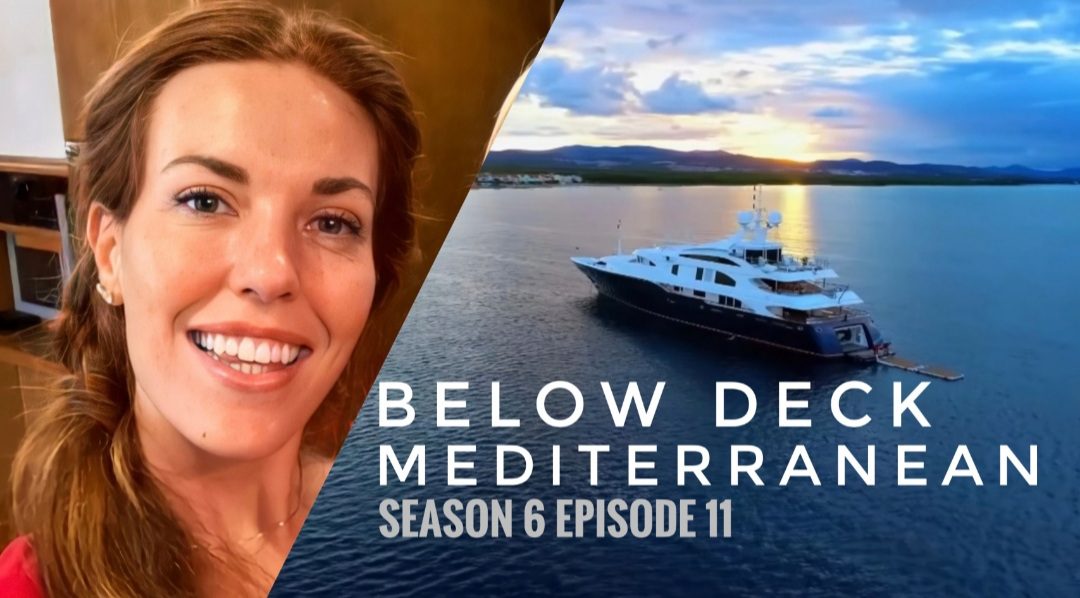 Below Deck Mediterranean season 6 episode 11 will see the crew dealing with natural adversity. The official synopsis for the upcoming episode indicates a whiteout storm challenging the crew of Lady Michelle. While the previous episode focused on the arrival of a new crew member, episode 11 will focus primarily on the needs of the guests. It seems that the storm and bad weather will render the entertainment facilities atop the yacht obsolete.

The crew will have to challenge themselves and find new ways to keep the guests entertained. This will mean that the crew will have to make the best of their improvisational talent and abilities. We hope to see more from the new yachtie, Delaney Evans, as well. The following contains spoilers for episodes 10 and 11 of Below Deck Mediterranean, tread carefully!

Below Deck Mediterranean season 6 episode 11 will release on September 6, 2021. The show airs on the Bravo cable network. You can catch the new episode when it airs on Bravo on Mondays at 9/8c. Season 1 premiered on the network back in May 2016. Season 6 made its premiere on the channel on June 28, 2021. You can also catch early access to each new episode on Peacock. Season 1 and season 2 are also available to stream on Netflix.

Episode 10 of Below Deck Mediterranean saw a new addition to the crew — Delaney Evans. Captain Sandy Yawn permitted Katie Flood to bring in a new yachtie to lend a hand in the interior. The chief stew did just that and the new yachtie finally arrived on the yacht. Right off the bat, Evans gave an admirable impression of herself. She has done her graduation from Berkeley, with a degree in media studies. Evans gained a new appreciation for the water during her time in the college’s sailing team. Evans then talked to Captain Sandy about her working experience as a sailing skipper. However, Evans also stated that she barely had any experience working in the interior. That doesn’t attenuate Delaney’s enthusiasm for the new job or the role, though. “I’m willing to help wherever is needed”, she answered when Captain Sandy asked her about assisting in the interior.

Chief stew Katie then met Delaney and the latter shared her excitement for what the future entails. Katie then gave the new yachtie a tour and introduction to the crew members. Evans kept the level of enthusiasm and energy constant while working as the new stew. Katie took notice of that and told other crew members about it too. However, Delaney’s start on the yacht wasn’t free of turbulence. Despite Delaney having no problem rooming with Mathew Shea, Captain Sandy found out the yacht’s management company doesn’t allow that. This resulted in a temporary reshuffling of roommates. Furthermore, this will also result in a tedious reshuffling of the room assignments. Katie later expressed her qualms regarding the issue to Delaney. However, Evans told her to give her a chance, and deservedly so, since she’s done a great job so far.

Episode 11 of Below Deck Mediterranean season 6 will see the crew contending with bad weather. Titled, “Should I Stay or Should I Go”, the episode will see Lady Michelle meeting a whiteout storm. The continual bad weather will force the crew to find creative ways to entertain the guests. We’re also going to be seeing how the new stew, Delaney Evans, keeps up with the new challenges. From the official synopsis, it seems the storm will put the crew’s creativity and improvisation skills to test.

What is Below Deck Mediterranean About?

An American reality series, Below Deck Mediterranean, premiered on Bravo on May 3, 2016. The show is a spin-off of Below Deck that aired on the same network as well. The series follows the lives of the crew members working and residing aboard a 150’+ superyacht. Season 1 was set during a charter season in Greece. Season 3 is set during a charter season in Italy, season 4 in France, and season 5 in Spain. Below Deck Mediterranean season 6 follows the superyacht crew of Lady Michelle in Croatia, which was also the region season 2 was set in. The filming for a season spans around six weeks with the cast replacing the conventional crew temporarily.

Season 6 Cast and Superyachts Throughout the Series

Season 1 followed the Ionian Princess superyacht while season 2 focused on the cast aboard the Sirocco yacht. The third season followed Talisman Maiton, season 4 revisited Sirocco, and season 5 followed The Wellington. Season 6 follows the lives and work of the crew on Lady Michelle. The cast for season 6 of Below Deck Mediterranean includes Captain Sandy Yawn. Mathew Shea is the chef, Katie Flood is the Chief Stewardess. Lexi Wilson, Courtney Veale, and Delaney Evans are stewardesses. Malia White is the Bosun, while David Pascoe, Lloyd Spencer, and Mzi “Zee” Dempers serve as the Deckhands.

The Beginning After The End Chapter 119: Release Date, Spoilers & Recap