Battle on The New Moon Part 1 In Episode 11 of Yashahime: Princess Half Demon – The Second Act 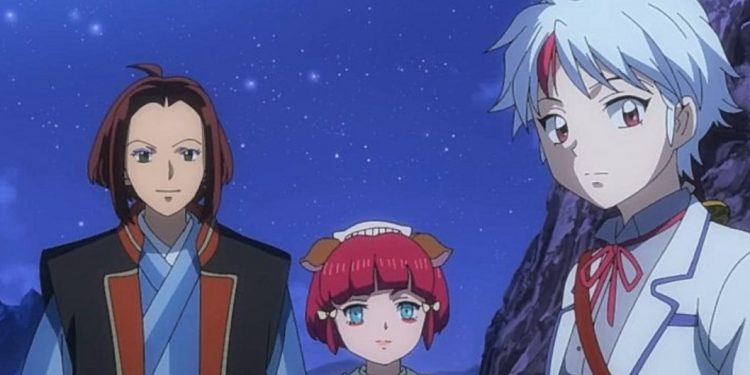 Yashahime: Princess Half Demon – The Second Act Episode 11 reveals Snow Demon’s arrival in the village. Bounty Hunter Moroha wakes up after using her beast form to face Full Moon Raccoon. Takechiyo reminds her about the ceremony and that Shogen will become the clan leader after the ceremony is over. Moroha realizes that she saw Takechiyo’s brother and asks about him. Takechiyo reveals that her brother has become the Head Elder Shogen Mamiana’s puppet. In Yashahime: Princess Half Demon – The Second Act’s latest episode, Hachiemon reminds Moroha and Takechiyo about the local raccoon dog.

No local raccoon dog can defy Shogen. Moroha wonders why Shogen and his Full Moon Raccoon Dog acts bossy. She realizes that she failed to take them down using her Backlash Wave. Takechiyo warns Moroha that going near the castle at night is risky. Hachiemon is glad that the new moon will emerge in the evening, and it means they won’t face troubles since the Dark Moon came out last night. Moroha gets excited that her plans will work. Riku, Towa, and Rion decided to rest in the forest and continue with the journey in the morning.

Rion notices that Towa’s hair has turned black; Riku adds that he has seen that Towa’s demon powers have been weaker since the New Moon. Towa realizes that it is her New Moon and wonders if Setsuna is okay. Rion wonders why Towa is worried about Setsuna. Towa reveals that she and Setsuna had their dreams stolen by the Dream Butterfly. But Setsuna has never lost her demon power during a New Moon. Riku thinks that Setsuna will also lose her powers, and Towa is worried that Setsunba is not around. He realizes that he failed to protect Zero when she had the same feeling as Towa.

Previously on Yashahime: Princess Half Demon – The Second Act Episode 10

Riku recalls the day Beautiful Demon Zero lost her powers and failed to save her. Zero realizes that Shinkon Jewel’s prophecy told her about the Great Dog-Demon’s death, but she failed to protect him. Riku wonders if Towa would do the same as Zero. Rion tries to console her, and Demon Yukiyundo arrives at the forest and smells something delicious. Yukiyondo wonders what that smell is and realizes Sesshomaru’s daughter. He summons Snow Beasts to show him who tress pass around.

On Setsuna’s side, Kohaku, Nanasuke, Husui, and the others find that Yukiyundo has been destroying the villages. Setsuna begins to feel cold, but they give her a Kimono to warm her. She wonders if Towa feels the same since it is the New Moon. Demon Cat Kirara returns and reveals that Snow Demons are coming. Setsuna realizes that the Demons have found out about her. Hisui arrives, and Setsuna asks him a favor. Beautiful Demon Zero and Nanahoshi arrive at another town and realize the New Moon. She tears the paper, turns it into butterflies, and sends it to her target.

Nanahoshi wonders if Zero will become more potent after returning the Rainbow Pearls to her eyes. He is surprised why she is not doing that, and Zero reveals what is stopping her. Riku, Rion, and Setsuna decided to continue traveling. Hachiemon explained the battle that happened during the New Moon. Moroha’s mother and Father faced Full Moon Racoon Dog and Shogen. Kagome and Moroha’s father had an intense battle and defeated Full Moon Racoon, but Shogen escaped. Moroha’s father sends Takechiyo to Mr. Jubeyi, the Corpse Dealer.

Yashahime: Princess Half Demon – The Second Act Episode 11 will be released on 11 December 2021. Shogen learns that Tacheyo is the heir and tries to kill her, but they send her away. Moroha works with Hachiemon and Takechiyo to dethrone Full Moon Racoon Dog, and Shogen Yukiyundo arrives in town looking for Sesshomaru’s daughter. Riku cuts the butterflies that Zero sent, but Towa gets taken away. Let’s look at Yashahime: Princess-Half-Demon – The Second Act Episode 11 official details.

Hyunckel and Crocodine’s Execution In Episode 61 of Dragon Quest: The Adventure of Dai