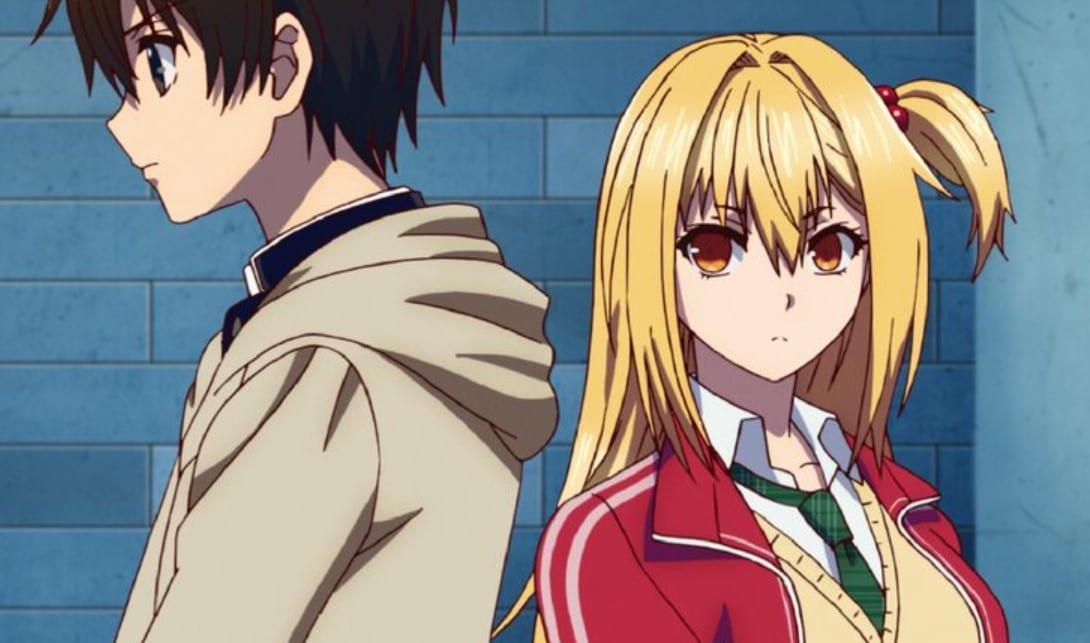 Battle Game in 5 Seconds makes its first episode debuted; let’s find more about this anime here. The episode begins with a brown-haired boy paying alone, and he enjoys winning. The boy realizes that all the time he begins to dominate, the connection always cuts off. He wonders if he should stop playing this game and realizes that he has to go to school. The boy heads to school and plays games since he wants to escape his reality; two girls behind him called him Akira.

The girls notice the Akira loves to play games, and he is even gaming on his way to school. Akira thinks the exams are competition for him even though others think it is a battlefield. A black van arrives and a man wrapped with masking tape on his face steps out of the truck. The truck passing by almost hit that man, and the driver asks if he is crazy. Tha guy kicked the car out of his way and heads towards Akira. Akira dodges barrages and jumps away.

That man’s punches are too powerful; when he attacks, he can crack the ground. Akira grabbed a bike and began to escape. The man chases Akira, who wonders why this beast is after him leaving other humans. Later Akra arrives inside an abandoned building and manages to hide. The beast looked for him, and he set two traps for him, but he survived the first one. The beast got smashed by a huge tank, and Akira wonders if he killed the beast.

The episode title is ”Sophist.” The beast manages to revive buy he is severely injured, and Akira took steel to counter-attack. The beast jumped, and Akira spears him with a steal, and a shower of blood flow over the beast’s body. After killing the enemy, a lady dressed in red and black appears behind Akira, asking if she is talking to Akira Shiroyanagi and says she is here to congratulates him. The lady said no one would believe that Akira would beat her pet.

Akira wonders who this woman is since she has a tail like a cat. The lady slashes Akira’s arm and defeats him instantly. The lady left Akira bleeding unconscious and told him that the fun has begun; Akira believes that he will win again when he faces that lady. The next day Akira wakes up inside a strange building and finds that he is not alone. He finds that he got handcuffed along with others like him.

Akira is surprised that he is not injured and wonders why he got handcuffed. The lady that beat him appears at the lady and begins to talk with everyone. She told everyone that she is their navigator, the beautiful magician Mion. Akira realizes that it is the lady that beat him to death. Mion congratulates everyone who is inside the building, handcuffed. Mion reveals that they are all chosen to serve their project.

She told them that they got removed from the national registry, and in the eyes of society, they are considered dead. They have nothing to do but obey their leaders and lived by their rules and directives. One of the punks thinks that Mion is talking nonsense and steps up to challenge her. Mion unleashed a machine gun on her hand and blast that guy in half. The half body of the guy flies outside, and the half remains on the floor.

Everyone realizes that Mion is terrible news, and she told them that was her bullet-catching trick. The boys begin to panic while the girls start to tremble, wondering if Mion would kill them. Akira can’t believe that Mion killed a human that simple and has no regrets. Some of the boys tried to break the handcuff, but they are just wasting their entry. Mion explains why they are here and why they got chosen, and that they will fight each other in five-second. The students begin with the preparation for their upcoming battles.

Also Read: What To Expect From Battle-Game In 5 Seconds Episode 1?