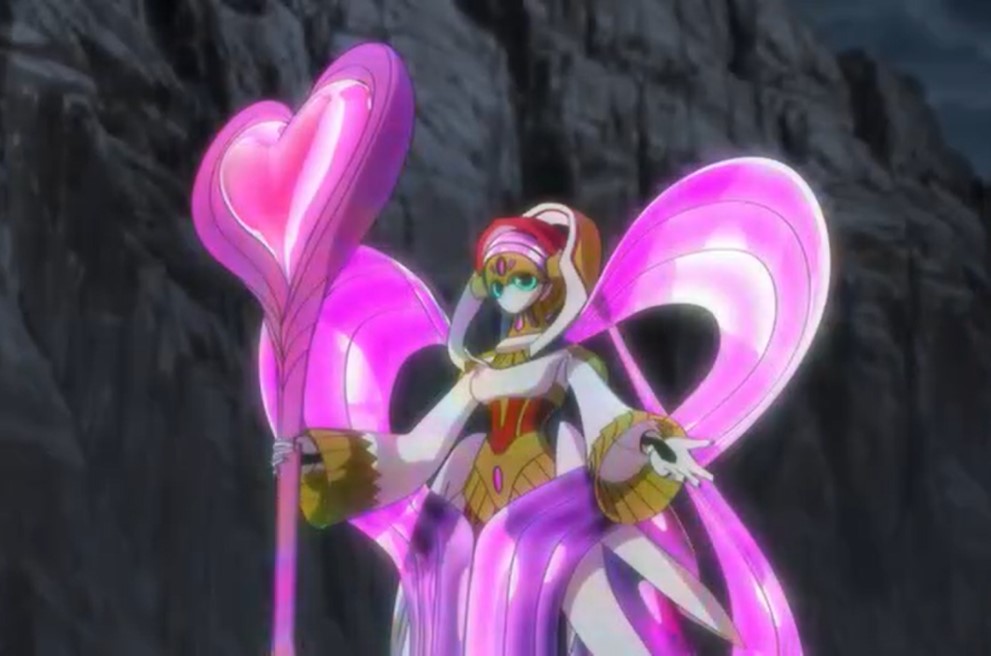 Kai had lost his way, but Ren arrives in time and gives him confidence. When their Briheights combined, Kai obtained mastery of the skies. They both started to dominate Lutoh’s army. Kai decided to face Shu and Arrow with the help of Ren. The Duo arrives in front of Shu. Kai wonders where Arrow is since he wants to get his revenge. He is not worried about Shu since he considers Shu to be weak. Shu asks Kai if he is looking for him and Kai said he wants Arrow.

Kai comments that his anger for Shu is just a grudge. His enemy is Arrow, not the likes of weak Shu. Kai reveals that he will use all of his strength to defeat Arrow. Ren comments that the Kai she knows is back. Kai reveals that Shu has betrayed the nation and broke promises, and led people astray. If Arrow is defeated, Shu’s dream will shatter.

Previously on Back Arrow Episode 13

Kai combines his manifest armor powers with Ren, and they both become one powerful being. Kai comments that he will crush Shu’s dream, and he must think of it as a friendship gift. Shu smiles and comments that Kai looks like he is himself again and more than that. Kai heads towards Arrow, who got smashed with the ground. He told Arrow to step up and fight him. 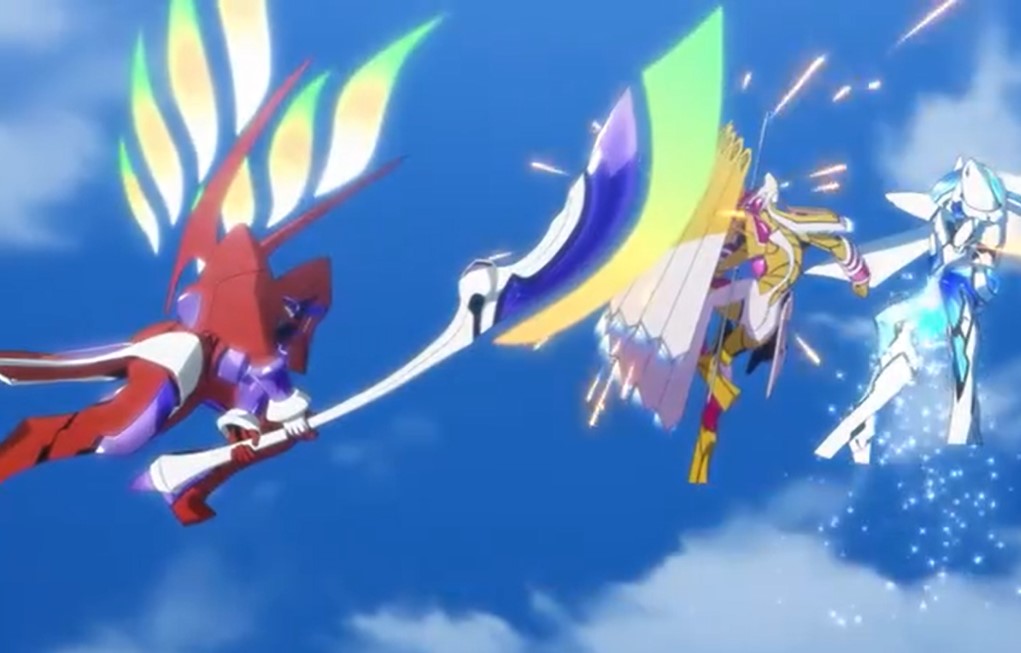 Arrow comments that Kai is something else, and he has come back strong after a humiliating defeat. He also told Kai that he wouldn’t hold back. Arrow tried to unleash a powerful blow, but his injury stops him from doing that. Shuu realizes that Arrow’s broken hand is giving him trouble. He told his allies to back up Arrow, and Kai realizes that Arrow has hurt himself. Ren notices that it is the earlier wound that she gave Arrow. Kai comments that he doesn’t care if Arrow’s hand is broken, and he won’t go easy on him.

Kai talks about respect, and Arrow comments that Kai knows nothing about respect. Ren comments that they will make Arrow pay and cry. She also said that because of Arrow, she became Kai’s wings. Ren said that to show her thanks, she will do everything she can to defeat Arrow. Arrow smiles and comments that he is ready to show them a good fight. The Duo started to punish Arrow and Atlee wanted to help Arrow, but another soldier interferes. The guy reveals that he is the Republic of Rekka’s Weast General, Goh Zanga.

He spins his weapon and gets ready to stop Atlee and Eisha from helping Arrow. Goh attacks Eish, and Atlee blocks the attacks. While Arrow is having a tough time exchanging blows with Kai and Ren. Atlee tries to attack with a lighting whip, but she got pulled back. The guy comments that Whip Brigheight come and face me, Rekka’s North General, Bai Toatsu. Arow manages to block a powerful slash from Kai even though his hand is broken. Kai told Arrow that his luck is running about and fire lighting that struck Arrow. 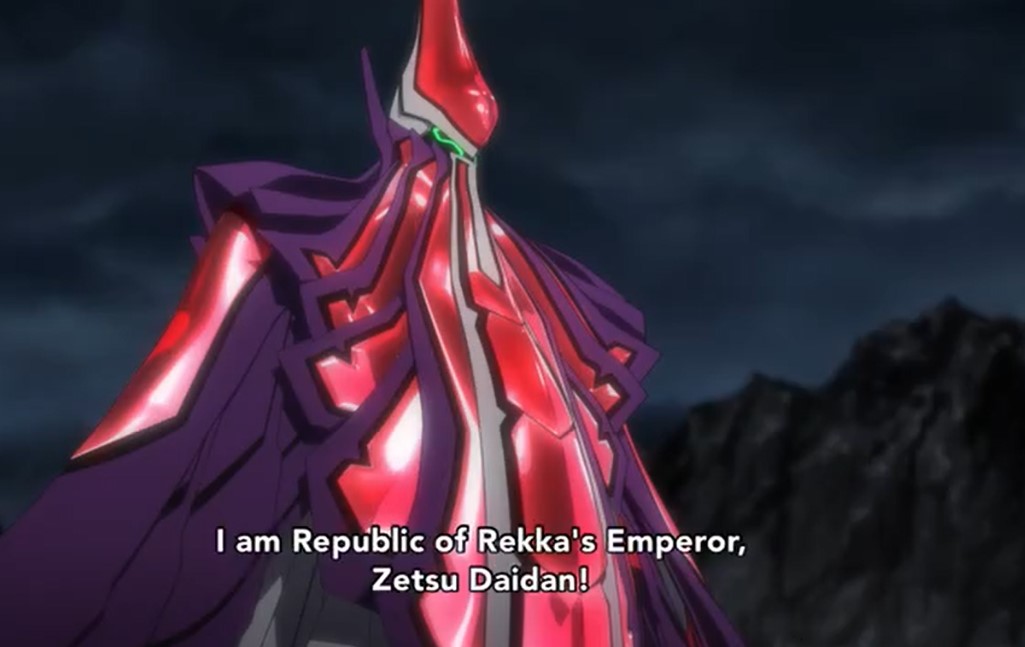 Kai comments that this is what Arrow will get for injustice.  He attacks again with a finishing blow and comments that Arrow is too slow. Before the blow landed, Prax uses her shield to block and protect Arrow from being taken out. Prax comments that she is the first one to learn how to fly. Kai must not try to act tough in front of her.

She reveals that she is the commander of Lutoh’s Armored Division, Prax Conrad. Prax told Kai that there is no need to say his name; they have already heard it. She started to exchange blows with Kai. Arrow is healing his hand to join the ballet and make it a 2v2 battle. After a long battle, Arrow took Kai to the top of the wall and told him the truth about the wall.

Kai refuses to believe him, and he defeated Arrow with Prax. Fines decide to join the battle and reveals that her conviction is love. Love is everything, and he reveals her new Lovsolute armor. No attack can price through the armor, and she challenges Kai. Zetsu notices that Kai has no match for Fine, and he joins the battle. He reveals that it is the showdown between the rulers, and his conviction is that he follows the path he makes. Zetsu is glad that he is facing a worthy opponent.

Back Arrow Episode 14 will release on Saturday, 9 April 2021, at 12:00 AM. You can Back Arrow online on AnimeLab, and Funimation. We will update more updates after episode 14 is released.

Find more about the latest battle in Luttoh here on Spoilers & Preview: Back Arrow Episode 13.