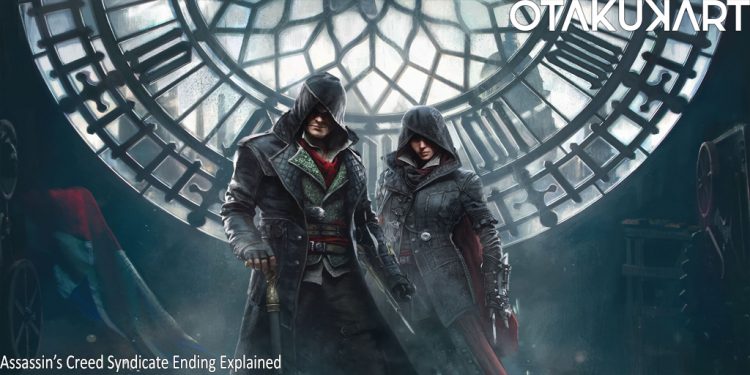 Like its predecessor, Syndicate follows the historical events in a fictionalized setting. The franchise follows the strife between the Assassins Order, who works in the shadow to bring peace with free will, and Templar Order, who wants to bring peace through control. In Syndicate, the game follows the Frye Twins, who come to London to liberate it from the Templar, Crawford Starrick, and prevent him from getting his hands on Pieces of Eden, which are an ancient artifact with different abilities. Assassin’s Creed Syndicate was received positively and has sold above 5 million units.

Assassin’s Creed Syndicate is a sequel to Assassin’s Creed Unity. In the present timeline, we again play as the Helix Player, now known as assassin initiate. Bishop returns from Assassin’s Creed Unity and asks him to help retrieve a Piece of Eden for Assassin Order. Bishop informs the initiate that two other members have infiltrated the Abstergo facility, Templars order.

The initiate relives the memory of the Assassin’s order member Frye Twins, Evie Frye, and Jacob Frye. The Story starts with Jacob and Evie infiltrating two different places. Jacob infiltrates a factory run by a corrupt boss, Rupert Ferris, and kills him, while Evie infiltrates a lab run by David Brewster and Lucy Thorne, a Templar. Evie kills Brewster and learns that the London Templar order is searching for a powerful Piece of Eden. This revelation prompts the twins to go to London and prevent the Templar Orders from getting Piece of Eden. There they meet the London Assassin Order member Henry Green where he informs that the London Assassin Order has fallen, and London is under the control of Crawford Starrick. Crawford is an influential industrialist in London, a Templar and underworld criminal.

Jacob and Evie work to liberate London from Starrick and stop him from getting the Piece of Eden. They build their gang and meet some historical figures like Charles Dickens, Frederick Abberline, Alexander Graham Bell, etc. They then become allies. The twin takes a different approach to deal with the matter. Jacob takes a brute approach, and Evie takes the stealthy approach. Jacob assassinates John Elliotson, the factory owner and producer of soothing syrup. He then assassinates Malcolm Milner, an omnibus company owner, Pearl Attaway, another omnibus company owner and secretly a templar.

He then assassinates Maxwell Roth, who used Jacob to burn a factory under Starrick with children working inside it. Jacob foils other Templar plans like preventing the murder of Prime Minister Benjamin Disraeli. Evie works stealthily to find the Piece of Eden, which she learns is Shroud of Eden, which makes the wearer immortal. Evie finds out the location of the Piece of Eden. She goes to the location to obtain the Shroud only to find Lucy Thorne. Evie fights and kills her. Before dying, Thorne reveals that the place she is going is not where Shroud is.

Henry deduces that Shroud is in a vault under the Buckingham Palace. Henry uses the aid of Maharaja Duleep Singh to find the map which contains schematics of Buckingham Palace. Templar reacts fast and steals the map. Evie does all this while cleaning the mess of his twin Jacob who has brought inflation in London and shortages of medicine.

Starrick moves to get the Shroud. Evie and Jacob argue about their doings, with Evie blaming Jacob for his reckless behavior and Jacob blaming Evie for her inaction. They infiltrate a ball in Buckingham Palace and meet Queen Victoria and Starrick. As soon as they learn the location of the hidden vault, they head there, but Starrick again beats them and wears the Shroud. But Frye Twins together fight Starrick and take the Shroud off of him. Then they together kill him with their hidden blade. After the events, the twins patch up, and the Queen awards the Frye twins for their deeds. They then return the Shroud back to the vault.

After defeating Starrick and putting the Shroud back into the vault, the modern-day Assassin Order moves to retrieve the Shroud before the Templars get to them, but Modern-day Templars again react fast and reach the location first. The Assassin members Shaun Hastings, Rebecca Crane, and Galina Voronina fight with Templar members Isabelle Ardant, Otso Berg, and Violet da Costa. In the fight, Isabelle Ardant dies, and Violet da Costa retrieves the Shroud and escapes.

Initiate then hacks Ardant’s computer to learn that the Templars are going to use the Shroud’s healing ability to build a living precursor of the Isu Civilization from scratch. The footage later shows Da Costa talking with another woman who tells Da Costa that she has done her part well and will now do her part to save the world. Da Costa reveals during the talk that Juno has been sabotaging Abstergo employees for her own reasons. The game ends with revealing the woman to be the Isu Civilization’s Juno. She has plans with the Shroud, which she does not tell, and the screen goes black, and credits roll.

The Beginning After The End Chapter 128: Will The DC Committee Expose The Culprit?