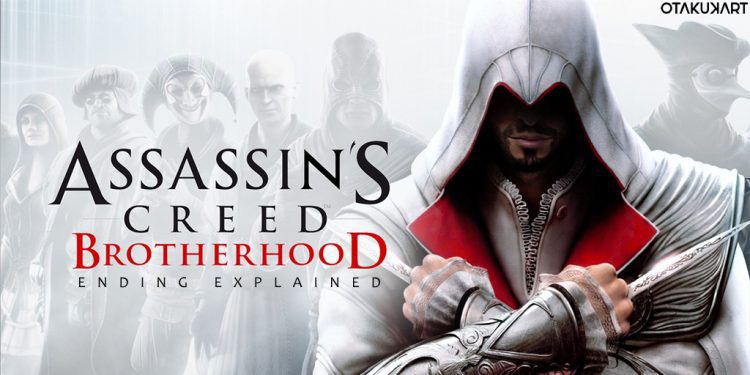 The Ezio trilogy is undoubtedly one of the most beloved storylines in Assassin’s Creed. However, fans acknowledge the second game in the trilogy, Assassin’s Creed Brotherhood, as the best game in the AC series. The game received a lot of praises from the fans and critics for the visuals and mechanics. But the main selling point for the Ezio Trilogy has been the narrative and the storyline. But like other AC games, Brotherhood’s conclusion also got many fans wondering with a bucket full of questions. Let’s dive into the Animus once more to get the Assassin’s Creed 2 Brotherhood ending explained.

What Happens In Assassin’s Creed Brotherhood?

The story of Assassin’s Creed Brotherhood picks up from the end of Assassin’s Creed 2. Desmond and his friends had to escape from their hideout because the Abstergo Industries ambushed them. The present-day assassins then escape to Monteriggioni. There the assassins restore electricity and set their new base in the Auditore Villa. Then Desmond again gets into Animus 2.0 for seeking answers to his doubts and also the solution to prevent the global catastrophe, Minerva.

Desmond relives Ezio’s memories and continues from where we were in the last AC title. Ezio was still trying to figure out what Minerva told him in the Vault. Soon his Uncle Mario arrives their and both escape Rome as the Templars are on high alert. After escaping from Rome, Ezio reunites with his family and friends at Auditore Villa. However, Ezio’s friend Niccolò Machiavelli was against him for leaving Rodrigo Borgia alive. The next Day, Rodrigo’s son Cesare Borgia attacks Monteriggioni and kills Uncle Maria while reclaiming the Apple of Eden. Whereas Ezio gets injured but escapes with his family to Rome.

What Was Ezio’s Journey This Time?

After escaping to Rome, Ezio seeks Machiavelli as he wants to avenge his uncle’s death and take don the Borgia Family from power. Further, Ezio discovers that the Assassin Brotherhood has gotten weak in Rome. Therefore, he not only wants to defeat the Borgia family but also rebuild the Brotherhood again to help him take down his target. Also, Ezio’s sister Claudia Auditore joins the Brotherhood, and Ezio becomes the Mentor of the Roman Brotherhood.

Ezio eventually rebuilds the Assassin Brotherhood and kills people in high authorities who were helping the Borgia family. Meanwhile, Cesare asks his father to hand over the Apple after seeing his doom coming close. But Rodrigo tries to poison his son as he realizes that his son’s greed to become more powerful can lead to their downfall. However, Cesare sees through his father’s plan and kills him instead and takes the apple.

Ezio witnesses Cesare killing Rodrigo and also knows the location where Rodrigo hid the Apple of Eden. Thus, the Italian assassin retrieves the Apple and uses it to defeat Rodrigo. Further, Ezio with the help of the new Pope gets Cesare arrested. But Cesare soon gets out of the prison and with the help of John the Third attacks on the city of Viana. But Ezio reaches there and fights Cesare once again. However, Cesare claims that no mortal man can kill him thus, Ezio lets him fall from the battlements of a falling castle. Finally, Ezio Auditore hides the Apple of Eden in a secret temple under the Roman Colosseum.

What happens In The Assassin’s Creed Brotherhood Ending?

With Ezio hiding the apple under the Colosseum, the past story comes to an end, and we get closer to the Assassin’s Creed Brotherhood ending. After knowing about the location of the Apple, Desmond, along with Lucy, Shaun, and Rebecca, visit the Colosseum. When Desmond goes to retrieve the Apple of Eden, he encounters another holographic message of another Isu woman, Juno, whom only Desmond can see and hear.

Juno’s biggest reveal to Desmond was that their race enslaved humanity. But some revolted against the Isu and evolved with free will, but she showcases her disgust against the evolution. She further shares that they shared everything with humans except the sixth sense of Isu or the Knowledge. However, some Isus interbreed with humans. Thus, this sixth sense is dormant among humans, but with training, it can be mastered, and many assassins had it, but they called it eagle vision. Juno also reveals that Desmond is one of those Isu descendants.

Later, Juno takes control of Desmond’s body, and one of the biggest cliffhangers of the Assassin’s Creed series takes place. As Juno controlling Desmond stabs Lucy using his hidden blade, then both Desmond and Lucy fall to the ground. In the later games, it was revealed that Lucy was a double agent who was aligned with the Templars. That was the reason behind Juno killing her.

After the Assassin’s Creed Brotherhood ending, the screen goes black, and we hear two male voices discussing that Desmond has slipped into a coma and he should be put back to Animus in order to heal. Those two voices were none other than Desmond’s father, William Miles, a master assassin and a fellow assassin Harlan Cunningham.

Where is Royal Matchmaker filmed? All Locations Revealed