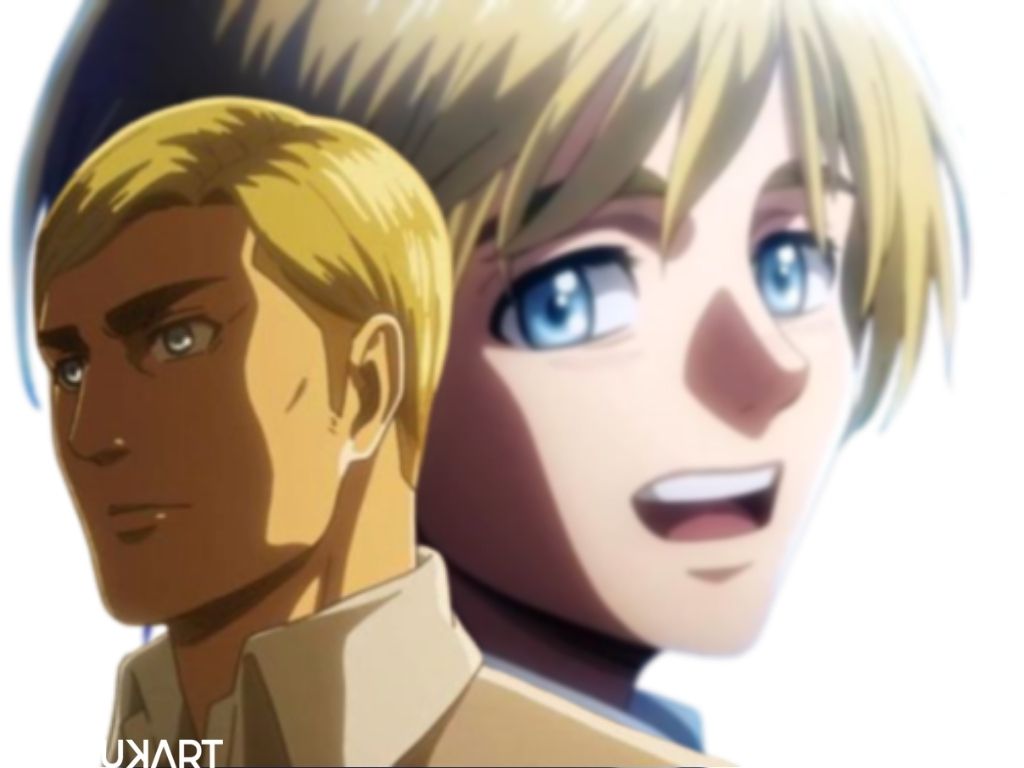 Fans are sad but happy with Levi’s choice. In part in Season 3 Episode 18, “Midnight Sun,” where Levi chose Armin over Erwin, why do you think he did? Many say it was best, even though they would have liked it more if Erwin was granted the power of the colossal Titan. Others have ridiculed Armin, saying he lacked confidence. Despite the uproar during the episode and the overflowing sadness fans had, it is for the best to still analyze who should have been more suited for the power.

Attack On Titan, the anime by studio MAPPA, has been one of the most awaited anime series. The twist and the plots, by Isayama, were always unexpected. Every time something major happened, it happened for a reason. And the reason, it never gets old for fans to not expect and always taken by shock. Similarly, it was never expected when the scene happened, and all fans could think was, “they both are going to be saved. For sure. Hope so?” But, just like life, it never goes as planned!

Also Read: 10 Things Eldians Know Nothing About In Attack On Titan

What Happened in Attack On Titan: Season 3 Episode 18?

The 18th episode of the third season of AOT, titled ‘Midnight Sun’ had fans taken all over. While Armin endured the colossal Titan, Bertolt, he bought some time for Eren to harden himself. In the process, Armin got burned all over, he was almost unrecognizable. On the other hand, the Beast Titan, Zeke Yeager, was defeated by Levi. Levi, who fought in spite of all the soldiers who were injured during the attack by the Beast Titan, had to make a choice. What choice? The choice to bring one of the two back to life. 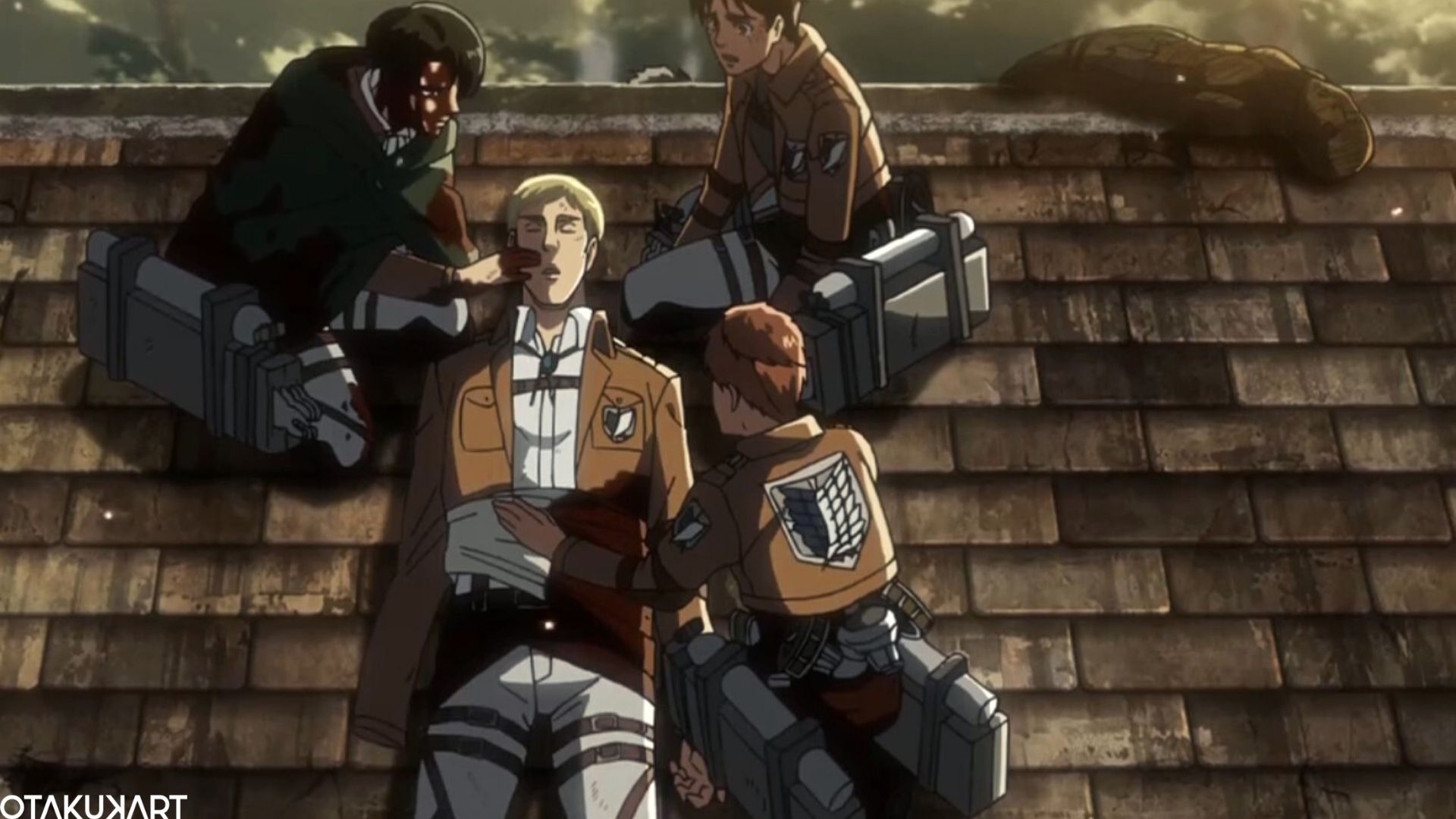 Erwin was brought to the inside of the Walls by Floch

Armin, who had the right knowledge but lacked experience and confidence, and Erwin, who was the 13th Commander of the Survey Corps with enough experience and knowledge, both were critically injured. The Titan Serum that was in the hands of Levi was the only way to save any one of the two: Armin or Erwin. Who will it be? Armin had the support of Eren and Mikasa, whereas Levi stood for Erwin. The decision had to be purely rational based, excluding personal feelings.

Why do you think Levi chose Armin and not Erwin? Was his decision good enough? Did he not become hasty while deciding whom to save? Was Armin really the best choice? 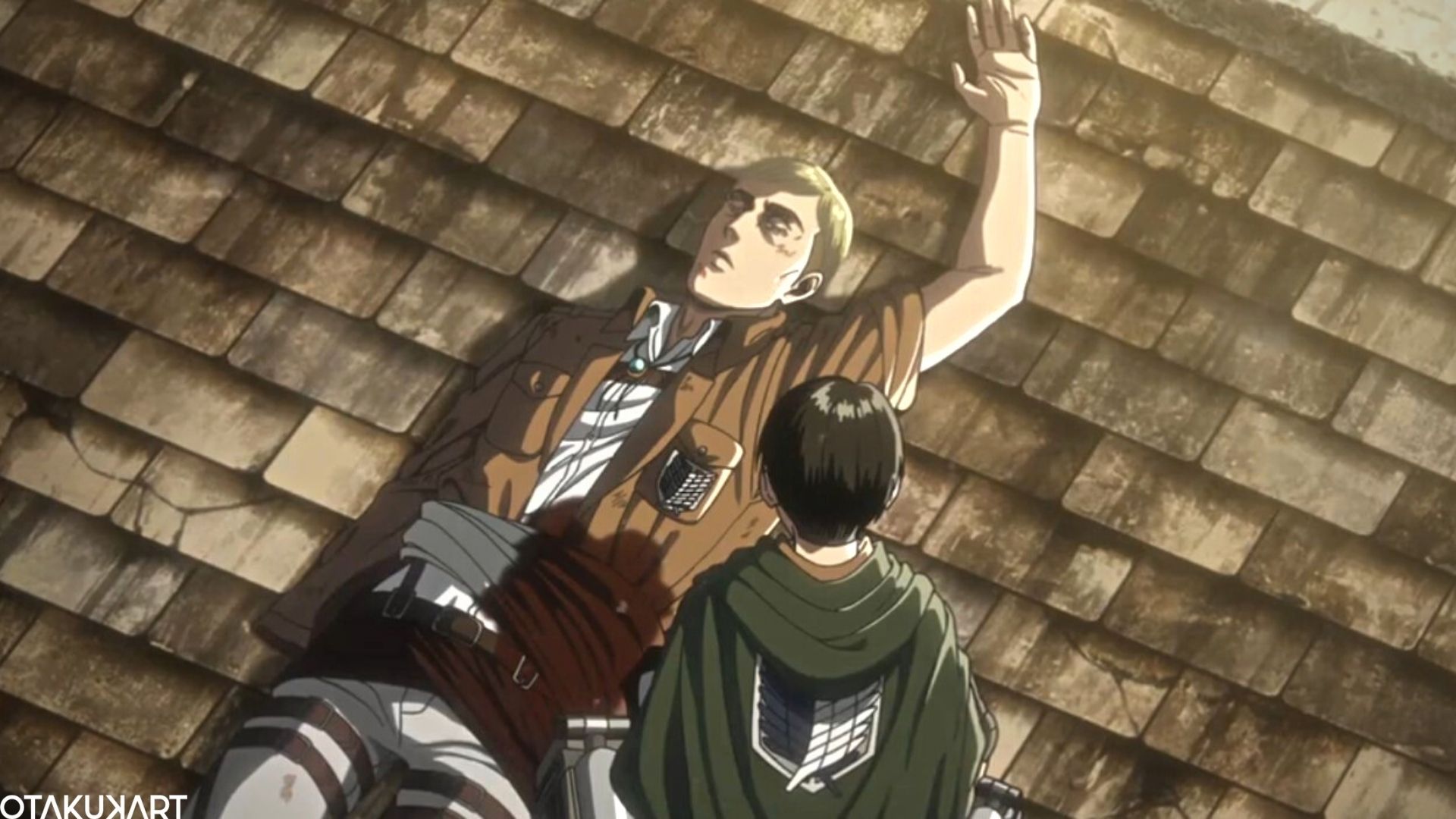 Erwin’s last words were: Sir, how do you know for sure there’s nobody on the other side of the walls?

Armin Or Erwin: Who should have deserved the Titan power?

Let us first analyze Erwin, the Commander of the Survey Corps. Erwin Smith, as a child, was curious and very insightful, which led him to ask questions other children would not have even thought of. Growing up, he had been very purposive with his attitude, character, and even his personality. In order to save humanity from the titans and in order to challenge the dominance of titans, he could go to any length. His strategy and the calculations he made all had a reason of saving everyone, even if someone had to be sacrificed, including himself. 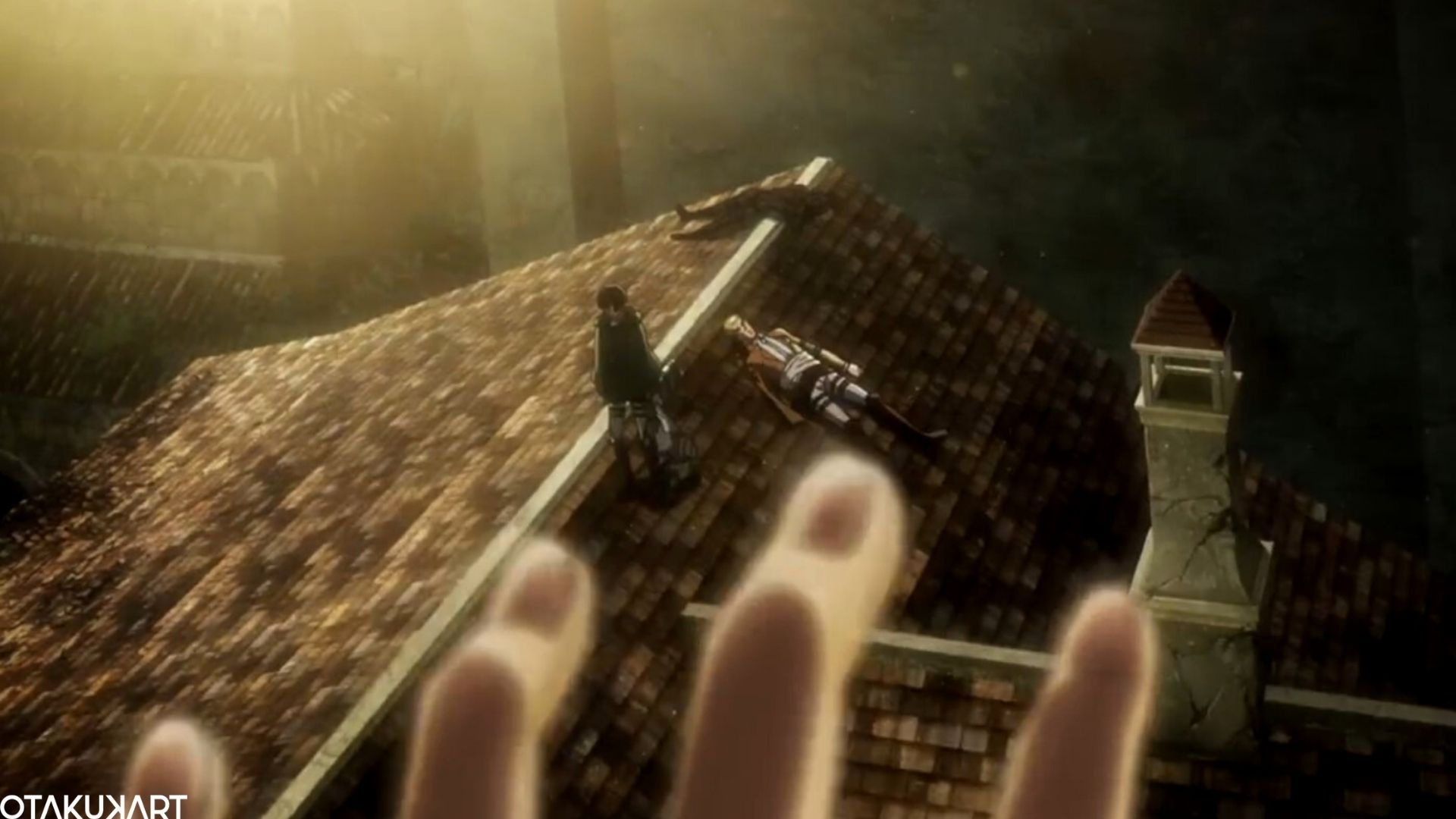 Levi had asked all to leave, so he could inject Titan Serum into Erwin

Armin, on the other hand, is the opposite of Erwin. Armin Alert, a member of the Survey Corps, lacked confidence, if any. He was knowledgeable in the sense that he could plan a strategy in any situation based on the information he had. His ideas were even implemented and acknowledged. Though Armin lacked what a leader needs the most, he had enough knowledge and information to work side by side with Erwin.

Now, based on the above information, if we were to look who deserved the Colossal Titan’s powers, it is obvious. If it had been Erwin, he would have planned and fought so well that the fight may have been over sooner. A meme surfaced where Erwin was seen as a colossal titan who overthrew the titans and the people from the Marley empire. As for Armin, yes, even he was a better choice but not more than Erwin.

However, even after the possibility, why Armin? Armin had everything Erwin had, except for enough experience and a bit of self-confidence. Erwin, on the other hand, had had enough of the cruelty. He had to become a demon not because he wanted to but because he was forced to.

If someone expects too much from you, you too will go to extreme lengths to achieve something. Same with Erwin, he had to sacrifice many humans for humanity! Also, the fact doesn’t change, how Levi realized sooner than later that Erwin was about to be brought for another hellish round. Despite this, Armin isn’t all a bad choice, obviously. That’s because he plays safe, trying to save everyone. 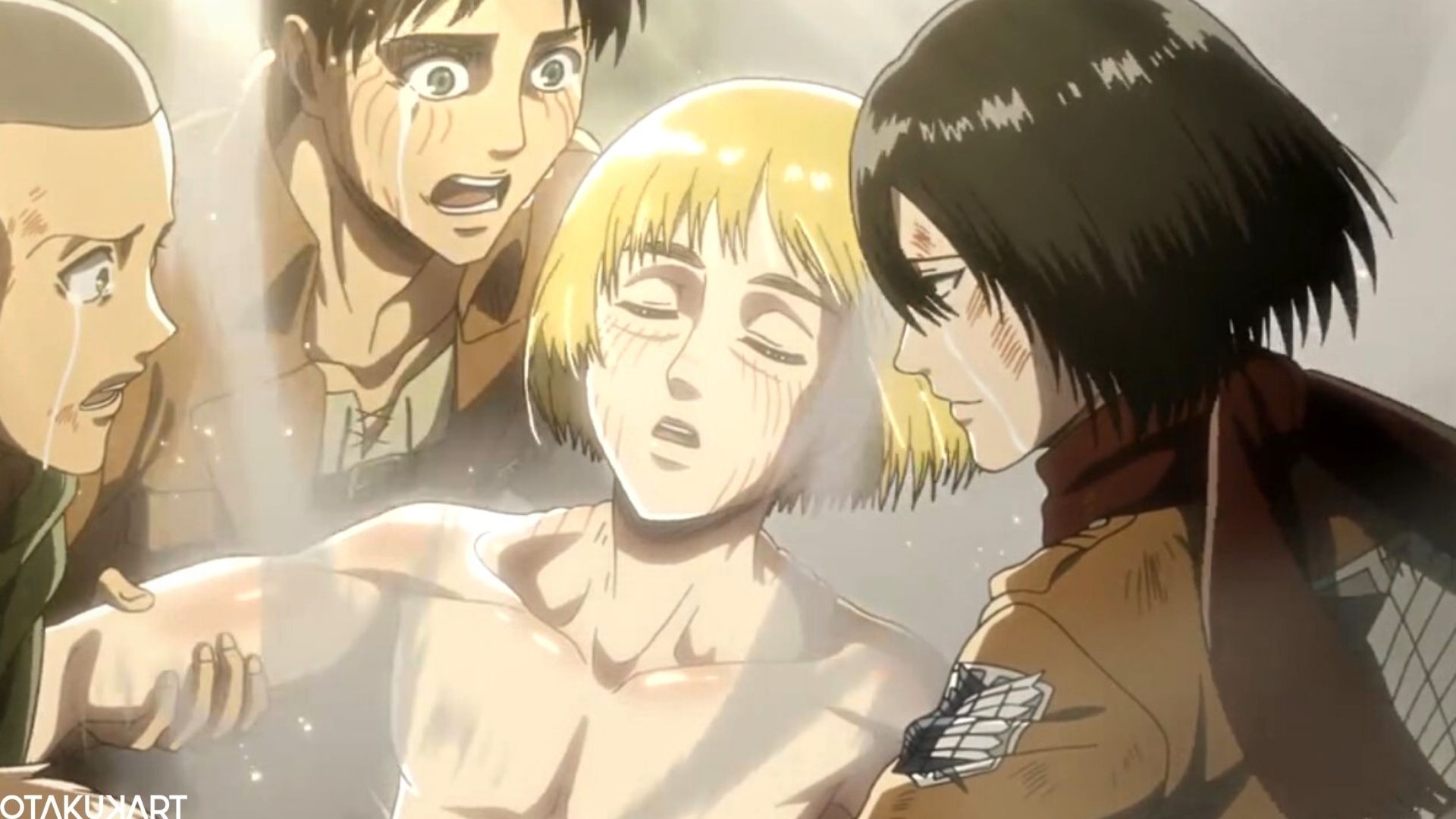 Also Read: Who is Squad Leader Hange Of Attack On Titan? Character Analysis