Are the former pair of the 90s thinking about reconciliation? 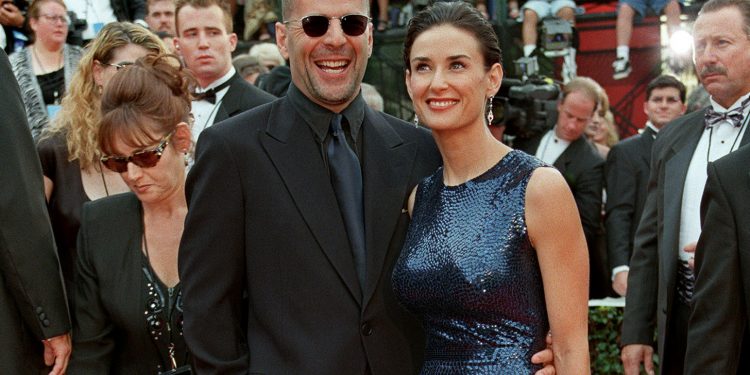 Are Demi Moore and Bruce Willis coming together? Two of the most popular celebs met at the premiere for the hit cop film Stakeout and started a blooming relationship. We are talking about action hero Bruce Willis and Hollywood diva Demi Moore. The two started dating and soon tied the knot in 1987. While they were blissfully married and were blessed with three beautiful daughters, marital bliss came to a shocking end. The power couple took Hollywood by shock as they announced their split back in June 1998.

The former couple later filed for divorce two years later. When they submitted their paperwork in October 2000, their divorce was finalized the same day. Bruce Willis later admitted that he is not unaware of exactly what went wrong in the relationship. The pair recently raised eyebrows and gave way to speculation after quarantining together with their three daughters. Let us take a look at all the details about the ongoing rumors and lesser-known facts about Demi Moore and Bruce Willis.

While Bruce Willis and Demi Moore are not married together, they have impressed fans with the amicable nature of their split. The Sixth Sense actor has admitted that even though they are not together anymore, he still has a lot of love for Demi. He further said that they both have a lifelong commitment towards their children and will always make them their top priority. Contrary to all the ongoing speculations, the two are not reconciling their marriage. Bruce Willis is happily married to Emma Heming.

While both of them moved on and married other people, they have been a close-knit family when it comes to their children. Their daughter Rumer has opened up about it in an exclusive interview with Larry King. She said that her parents made such an effort during the time of crisis. The two even quarantined together with their daughter while playing board games and experimenting with pajamas!

Also Read Demi Moore Dating History: Who The Actress Has Dated All These Years!

The Ex- Couple Continue To Co-Parent Their Children!

Bruce Willis and Demi Moore do not forget to share those big family moments. They both were cheered Rumer as she competed on Dancing With the Stars season 20. Rumer revealed that how the two always made an effort to do all of the family events still together. While the marriage did not last for long, here’s a beautiful black and white picture from their wedding. The Ghost actress took to social media to share the picture. Have a look at it.

Remembering #LittleRichard today… Bruce and I were so lucky and honored to have him officiate our wedding back in 1987 — thankful for the memories. Rest easy ❤️ pic.twitter.com/MFU347Ogij

Not to forget how Demi Moore gave us all some rib-tickling moments as she roasted her Ex-husband at the Comedy Central Roast Of Bruce Willis in 2018. The family is so beautifully blended that Bruce’s wife Emma Heming has thanked Demi to welcome her in their life. The actress was present even when Emma and Bruce celebrated their 10th anniversary. Demi Moore also called Emma absolutely inspiring. Not only that, but Bruce Willis even showed immense support for his ex-wife during her book launch.

Demi Moore Opens Up About The Divorce in Her Memoir

While the Ghost star penned down a candidly honest memoir, Demi Moore admitted that she is very proud of her divorce from Bruce. While she further admitted that it wasn’t easy at first, but they surely felt more connected than they did before the divorce. The Indecent Proposal actress posted a heartfelt note on her ex-husband’s 65th birthday. The two have always been cheering for each other.

She further thanked him for the three greatest gifts of her life. In her memoir, Inside Out, Moore has expressed gratitude towards Emma and Bruce’s family and her two daughters. She is thankful for the big blended family as they sure are setting great examples for many. The memoir also included some never heard before details about her tumultuous marriage with actor and Ashton Kutcher. The actress also revealed that she suffered a painful miscarriage while they were dating. The details have shocked fans as Demi surely did not hold back.

Curb Your Enthusiasm Season 11 Episode 10: How Far Will Larry Go In The Season Finale?