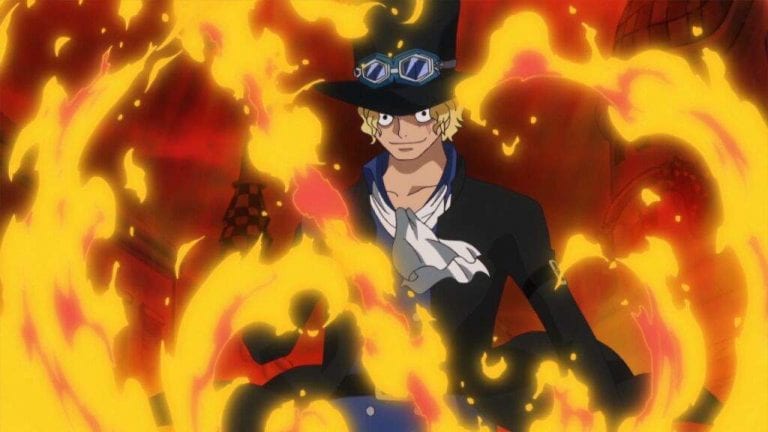 Sabo is a member of the Revolutionary Army, and he’s their second strongest member. Sabo was introduced after the War of Marineford, as one of the sworn brothers of Luffy and Ace. However, he was presumed to have died back when he was a kid.

The Dragon was actually the one who saved him, and because of him, Sabo ultimately joined the Revolutionary Army. Sabo had lost all his memories until he found out about Ace’s death. He was later reintroduced at Dressrosa, where he was of great help to Luffy, and the cause of the Revolutionaries as well. Sabo also saved Luffy from Jesus Burgess, and he single-handedly stopped a Marine Admiral without any problems.

Sabo was later revealed to have been involved in a short war at Baltigo. It was Jesus Burgess who had made it all the way to their hideout, and he informed Blackbeard about their location. We didn’t see the battle, nor do we know it results. But, apparently, it resulted in the complete destruction of Baltigo, Dragon’s Hideout.

Sabo and Dragon were two of the main characters who were caught in this battle and their fates remained unknown. However, it was confirmed by Pedro that they probably survived, because otherwise, we would’ve known about their deaths. I personally think that both Sabo and Dragon are alive.

What really happened was Sabo and Dragon together trashed Baltigo. They destroy it themselves because they had no time to fight the Blackbeard Pirates. Plus, the CP-0 and the Navy might also have arrived immediately, so it was best to burn Baltigo down to the ground. The newspaper did mention something about Sabo and Dragon, but I think they’re both safe.

The Dragon had also recently summoned the major leaders of the Revolutionary Army to Baltigo. So, there is no chance that they would’ve been defeated. It makes more sense if Sabo and Dragon escaped Baltigo. Sabo, being the second strongest member of the Revolutionary Army, is not easy to take down, so there’s no way anyone could make quick work of him. I think he’s safe and sound, and we’ll be seeing more of him very soon.