Andhadhun Ending Explained: What Choice Did Akash Made? 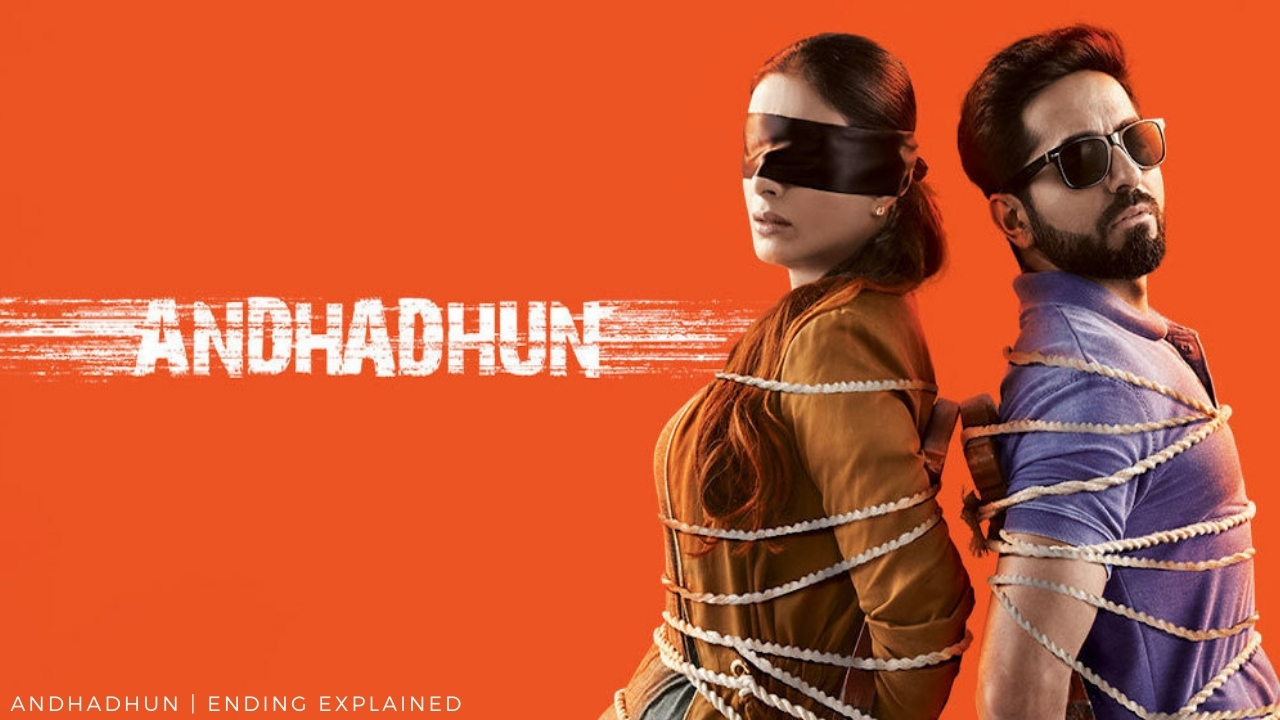 In recent years, Ayushman Khurrana has been giving some massive hits to the Indian Cinema. Taking up the stories that other actors are doubtful about. He’s been giving some great hits. One of them being his 2018 film “Andhadhun”. The movie got people thinking and twisted. The movie focus on a visually impaired artist. As he becomes the witness to a murder, the problems start knocking on his door. While the ending of Andhadhun left a lot of fans thinking about what actually happened. Those who understood the film were left awwed with their eyes glued to the screen.

The movie is directed by Sriram Raghavan. He’s been in the industry for a long time as a screenwriter and has given hits like Badlapur, Maestro, Johnny, etc. The lead cast has some acting gems from the industry. Along with Ayushman Khurrana taking the lead in the movie. Radhika Apte joins him as a supporting cast. She has a lot of Netflix Originals to her name. And Tabu, who has been in the industry for so long and has given absolute gems. The movie is based on a French short film called “L’Accordeur”.

The Story That Goes On…

The story connects people as it moves forward. Primarily the story focuses on Akash and Simi. One living as a fake visually impaired person and the other one being a gold digger. Acting as a blind person, Akash is a pianist and wears lenses that fogs his vision. Calling it a social experiment, he goes on to have the advantages that a disabled person gets. In the chawl he lives at, a kid who has his own doubts that Akash is not actually blind works on collecting proof. When it started, fans might’ve guessed what if this leads to the ending of Andhadhun. But we were wrong!

On the other hand, Simi is a failed actress. She married a successful actor Pramod because he had a lot of money. As Pramod is busy enjoying his retired life, Simi is busy having an affair with Manohar, a police inspector. Akash meets Sophie on the road as she mistakenly hits him with her scooter. Getting to know that he is blind and a musician, she gets him a job at her father’s restaurant for live shows.

The lives of Simi and Akash get entangled, and problems begin for both of them. It all begins with Pramod inviting Akash over to perform for Simi as a surprise. While he tells Simi that he’s going out for the night. Thinking of it as a good chance, Simi calls Manohar over. Coming to surprise her, Pramod catches both Simi and Manohar together and picks up his gun. Trying to take the gun out of his hand, Manohar accidentally shoots Pramod.

As this happens, Akash knocks on the door, not knowing what he is getting himself into. As Simi gets to know that Akash is blind, she welcomes him in. Asking him to perform as directed by Pramod, he does as told with a dead body beside him. Simi and her lover think that Akash can’t see anything, he watches them putting Pramod’s body in a suitcase, taking it to throw away. Afraid of everything he has seen, he goes to the police station to report the murder. But getting to know Manohar is the inspector there, he reports that he has lost his cat and wants them to find it. Suspecting that he might not be blind, Manohar follows him to his house to investigate. But he manages to make him believe that he is blind.

After The Accidental Murder

The news about Pramod being misses goes out to the media. Simi says that Pramod left the house with 1 crore and never came back. Taking Akash’s statement, he confirms that he is alive as he performed for him at his place. Simi spots Akash around her house as she throws her neighbor off the window for entering her business. She began doubting him about his vision. Planning to finish him by actually damaging eyes, she goes to his place. Going over to his place and chatting with him, she makes him eat drugged sweets and poisons his coffee. As Akash faints, Sophie arrives.

The kid from his chawl showed a video to Sophie proving that Akash is not blind. As she goes up to confront him, Simi makes it look like they slept together and lets her in. Disgusted and feeling betrayed by everything, Sophie shows the video to Simi, saying how she made a fool out of her because she showed him empathy. As she leaves, Simi decides to take the matter into her own hands, deleting the video and making him blind for real. After she leaves, Manohar reaches Akash’s house planning to kill him manages to escape by bashing Manohar’s face with an iron. As he successfully escapes, he runs into a post box and ends up fainting. But picked up by someone.

The Ending Of Andhadhun: Explained!

As we thought Andhadhun is almost ending, another twist comes up. Fainted Akash is picked up by Murli and Sakku. Murli sells lottery tickets while Sakku is an auto driver, and they both lives in the same locality as Akash. Looking at the place they are taking Akash to, they also help a doctor in the illegal trafficking of organs. The couple takes him to Dr. Swami and gives him anesthesia so they can take his Kidney out. Going unconscious, Akash tries to save himself by cooking up a lie that he has godly powers. Before losing his senses, he murmurs something about the tattoo of Lord Shiva on Sakku’s hand and says he’ll get her 1 crore. Getting the trio on his side, they make a plan to save him and getting them the money they want.

They plan to kidnap Simi. They make it seems like she committed suicide by leaving her car next to the spot where the police found Pramod’s body. Calling Manohar’s wife, Akash tells her about her husband’s affair with Simi too. As Manohar gets home, his wife starts threatening him with his gun. Just then, the news about Simi’s suicide goes out. Sakku and Murli manage to get Simi’s confession on the recording. Calling Manohar, they start blackmailing the cop and his wife and ask for the 1 Crore cash, leaving Dr. Swami and Akash behind. To save himself, Manohar puts a mix of real notes and blanks in a bag and gives it to them. To destroy the evidence, he follows them, but they lock him in the elevator. Trying to get out, he shoots the gun and ends up injuring himself.

Simi and Akash untie each other. But as soon as that happens, Simi attacks him. Dr. Swami comes in between, but she attacks him too. Teaming up together, Dr. Swami and Akash put Simi to rest by tying her up and put her in the trunk of the car and drive out. As she is still a criminal, Dr. Swami plans to kill her. Giving her liver to the daughter of a rich Arab and moving out of the country. He offers Akash to get Simi’s eyes and move to London. But as they are talking, Simi regains her senses and attacks the doctor. Killing the doctor, she asks Akash to jump out of the trust. And as he does, she speeds the car towards him. She loses control and crashes; the vehicle catches fire and explodes.

By the ending of Andhadhun, Two years pass by with no news from either one. But one day, when Sophie is on a trip to Europe. She runs into Akash at his performance. Telling her that he didn’t have the guts to face her after what happened, he moved here. He tells her the whole story about how he lost her eyes. How Simi tried to kill him but exploded instead. To save himself, he took a bus back to town and asked his friend to help him go to London. Feeling sad for him, she said that he should’ve taken the doctor’s offer. He just smiles and leaves. But as he leaves, he strikes a can with his walking stick. Lying to Sophie about the whole story of Simi’s accident and him being blind. The truth is that he actually took the offer.

The Handmaid’s Tale Season 4 Ending: What Has June Become And What Awaits Her?