In ‘And Just Like That’ Season 1 Episode 7, Carrie Moves On From Mr. Big’s Death 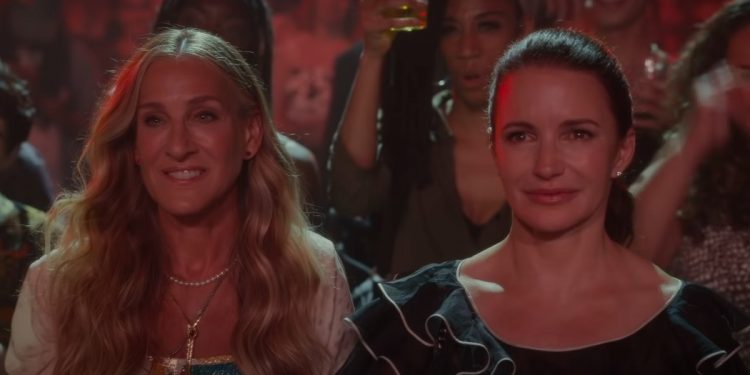 In And Just Like That Season 1 Episode 7 will show us how is Carrie Bradshaw coming to terms with her widow state. Not only is she older in this installment spin-off of “Sex and The City”, but she also has to deal and compete with much younger women in the sexual marketplace of New York City. She’s no longer the young bachelorette she once was. But that won’t stop a gal like Carrie, that’s for sure. After all, there won’t be a show if that were the case.

The last episode, Carrie went to a Diwali function in a very elegant lehenga outfit and has quite a surprise. Be sure to read our recap below to find out more. Additionally, “And Just Like That” is a Sex and The City spin-off that recently premiered on HBO starring Cynthia Nixon, Sarah Jessica Parker, and Kristin Davis out of the Candace Bushnell and Darren Star characters from the original series. Now, without any further ado, let’s begin covering this entertaining series here at Otakukart.

And Just Like That episode 6 premiered on January 6, 2022. It was titled “Diwali” and was directed by Cynthia Nixon. Also, Rachna Furchbom penned the script. First, Carrie purchases an amazingly, downtown apartment in order to start over. When Lily and Rose both want to keep updating their chic bedroom features to reflect their particular tastes and ages, Charlotte is taken aback. Nya, who is still trying to conceive, invites Miranda to participate in a project that converts old apartment complexes into shelters for relocated women.

Carrie is invited to Seema’s family’s Diwali celebration, a Hindu festival in which light triumphs over darkness. Seema has made up a story about seeing a (fictitious) doctor named Dennis to appease her parents’ constant pressure to marry. After that, Carrie joins Anthony for a consultation with a cosmetic surgeon about a facelift, and then considers getting work done herself. Later on, Miranda’s behavior toward Che, whom Miranda fantasizes about, is questioned by Charlotte, who praises her for quitting drinking. Carrie dislikes her new apartment and returns to her old one, where she is most comfortable.

What Happens at The Diwali Function That Impacted Carrie So Deeply?

Carrie arrives at Seema’s house for the Diwali function in a stunning lehenga and is greeted by her parents. However, it quickly becomes clear that Seema has informed her parents that she is dating Dennis, a very busy man who works for Doctors Without Borders. Instead of informing Seema’s parents, Carrie tells them that their daughter is “such a magnificent woman that it’s difficult to find a man who’s good enough.” Later, in the car, while the two of them smoke, Carrie inquires about the nonexistent Dennis. Seema explains that it’s just easier to fool her parents into believing she’s in a relationship because they’re always concerned about her being single and want her to marry.

She also admits that she made Dennis white in order for her parents not to be too upset. Carrie then starts asking Seema if she enjoys being alone; the realtor responds that she does, despite the fact that she often indulges in wishful thinking. Carrie is clearly trying to find a way to live without Mr. Big, and Seema’s words and way of life appear to be giving her hope. Seema then ties a thread around Carrie’s wrist, explaining that it’s a Hindu tradition meant to remind people of their strength. Carrie smiles, and it’s clear that she’s made peace with Mr. Big’s death.

If you want to watch “And Just Like That”, simply tune in at HBO during the airtime. Alternatively, you can connect to any HBO online platform like HBO Go or HBO Max. You won’t find “And Just Like That” on any other platform because the program is a Home Box Office exclusive. Fortunately, HBO is a globally available platform, and for a very accessible price, you can have it as an add-on in streaming platforms like Amazon Prime Video or Hulu or as a standalone package with a wide variety of original series, shows, movies, and a constantly rotating catalog of features from the best of cinema.

And Just Like That Season 1 Episode 7 will release on January 13, 2022, on HBO at 03:00 hrs, Eastern Time, United States. First, the episode will be titled “Sex and the Widow”. Secondly, every episode drops on Thursdays, and each chapter lasts around 45 minutes. Thirdly, this episode was directed by Anu Valia and the script was written by Julie Rottenberg and Elisa Zuritsky. With this, we conclude our coverage of “Just Like That” here at Otakukart. Thanks for reading our article. Please keep coming back to our website for more daily updates on all your favorite movies, series, and shows.

Also Read: Who is Cynthia Nixon’s Wife? Love Life of ‘Sex and the City’ Actress