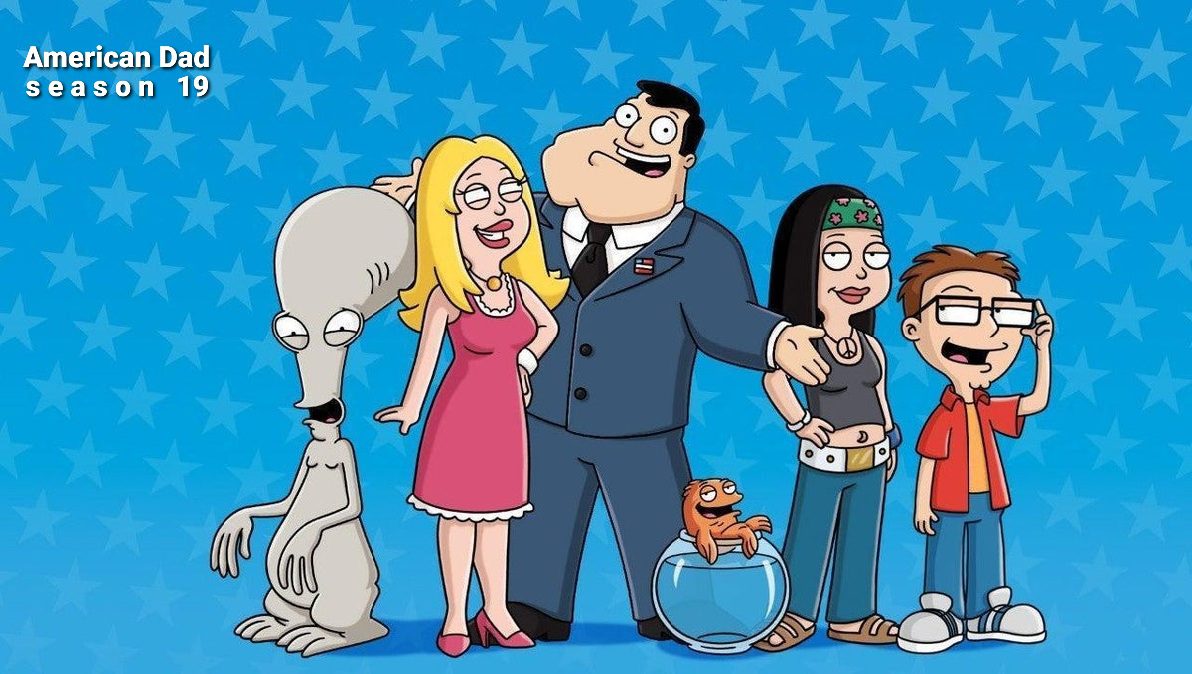 ‘American Dad’ Season 19 Episode 2 will arrive this Monday. Unfortunately, the official synopsis and additional details regarding the upcoming episode are still under wraps. What’s more, is that we don’t have anything else on the next episode other than the official title — “Dressed Down”. The previous episode saw Francine and Roger’s obsession over a reality show turning deadly. Roger put on his killer specs in order to land a place in his favorite reality TV show. He got it too, after pushing Francine off the cliff. However, Francine managed to climb back and retaliate.

Judging by what transpired in the last episode, the next episode may have something similar to offer. The official title doesn’t give away that much, but if we had to venture a guess, it’s something to do with fashion. However, take that with a grain of salt. Let’s now delve into all that episode 2 of ‘American Dad’ season 19 may entail and all that happened in the season 19 premiere. Spoilers ahead! 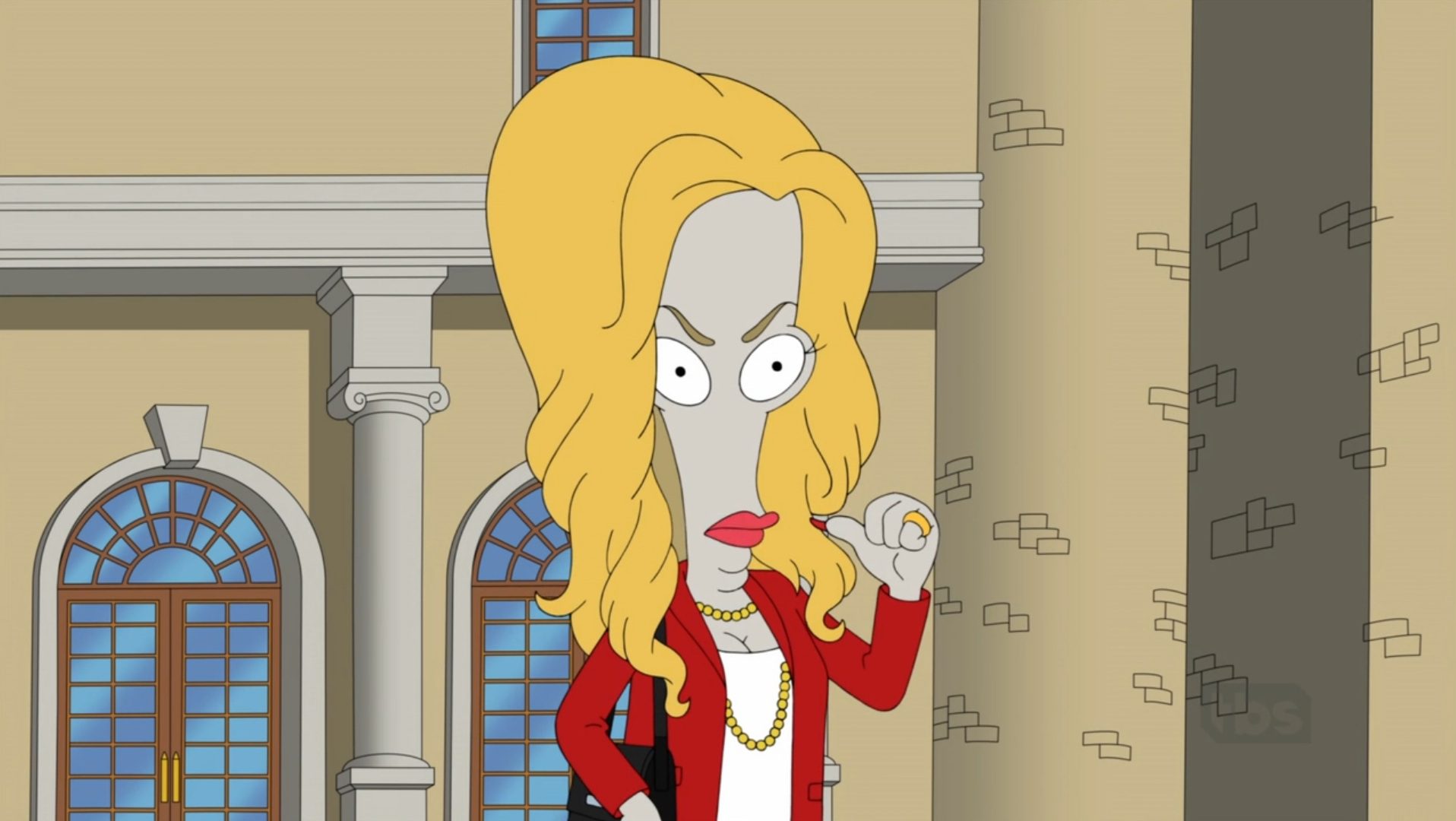 Episode 1 kicks off with Steve watching TV. As he’s about the start watching some explicit content regarding chimpanzees, Francine and Roger arrive. They hijack the sofa and change the channel. The show they’re watching is their favorite reality TV show, ‘Langley Dollar Listings’. Steve wants to go back to his chimpanzee orgasm program, but Francine and Roger don’t budge. They eventually shoo him away and resume their binge. The reality show goes normal, but the episode takes a turn when one of the realtors — Trashelle — goes missing. Everyone on the show presumes her dead and in her absence, turns to the audience to replace her. They hold an audition, which delights Francine and Roger to no end.

Among the thousands of participants, Francine and Roger audition too. Francine tries her best but doesn’t really seem to nail it until the judges start seeming impressed. Meanwhile, Roger’s idea of acing the audition turns out to be sleeping with everyone. He does just that — sleeps with everyone, including the cameraman. At the restaurant, Roger is quite confident that he’s going to get in. However, Francine’s phone rings in, and she gets the news that she’s got the part. This enrages Roger.

As Francine begins her part as the realtor replacement for Trashelle, Roger starts impeding her sales. Masquerading as a business manager and other fake identities, he doesn’t let her close deals. In the first deal, he wouldn’t let the buyers get inside the property. However, his plans to ruin the deals don’t quite work out. It only adds to the drama that spikes the show’s TRP. In the second deal, he spikes the drinks at the party Francine hosted. Everyone gets high, but that plan also backfires on him. One of the high clients buys the house. Impressed by her successful streak, the show offers her the biggest attraction to sell.

The Showdown at the Langley Chateau

Francine heads out for the Chateau Langley. However, Roger is there too. Francine confronts him, and he pushes her off the cliff. Francine survives and meets Trashelle, who also survived after being pushed by Roger. She is now a bit off in her head and working as a realtor for the squirrels. Trashelle offers her high heels to Francine to help her climb up and get back at Roger. She does and arrives at the chateau where Roger has taken over the show. He has also taken Trashelle’s boyfriend hostage and plans to run the show on his own. However, Francine arrives and successfully puts an end to his reign. She also manages to sell the chateau during the whole ordeal. The ‘Langley Dollar Listings’ changes to ‘Langley Squirrel Listings’. 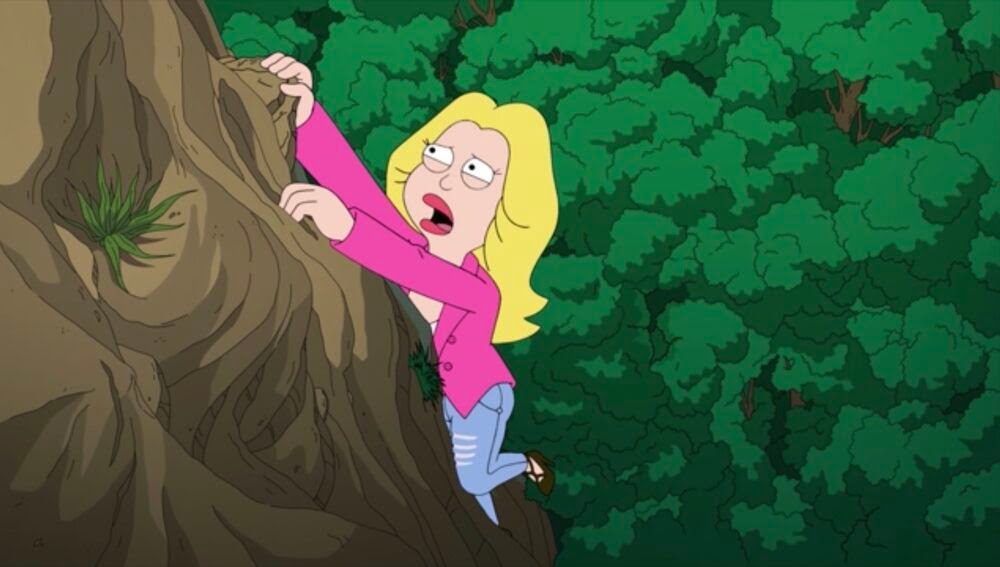 Francine dangling from the cliff in episode 1

Episode 2 of ‘American Dad’ season 19 will release on January 31, 2022. Unfortunately, there is no official synopsis available at the moment. Additionally, the writing and directorial credits and also under the wraps for now. All we have right now regarding the next episode is the official title — “Dressed Down”. No official promo for the upcoming episode is available either. However, we do have the official title for the third episode — “The Book of Fischer” — set to release on February 7.

‘American Dad’ season 19 episode 2 will air on TBS on January 31, at 22:00 hrs ET. If you can’t catch it on the TV, you can turn to online alternatives. The show is available to stream online via TBS’s official website and app. Furthermore, you can stream the first sixteen seasons of ‘American Dad’ on Hulu. Additionally, you can also binge the first 13 seasons of the show via DirecTV. Or you can opt for the VOD platforms like Google Play Store, Amazon Instant Video, iTunes, and Vudu to buy or rent individual episodes of the show.

Also Read: Minions 2: When Will The Most Anticipated Animated Movie Finally Come Out?