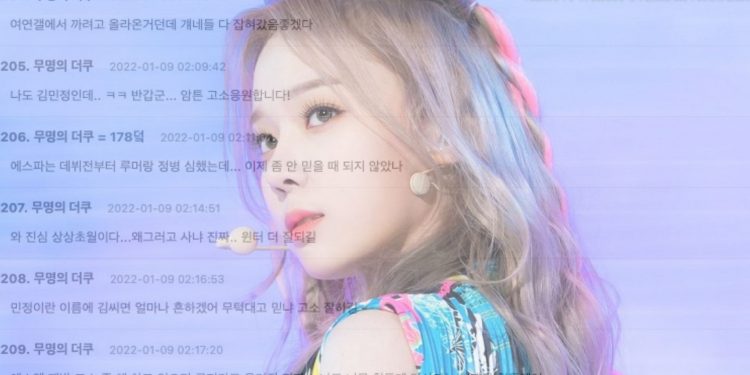 Controversies and rumors have swarmed around AESPA Winter’s “AskFM” Account. With all the stacked-up headlines and social media rumors, the truth has been filtered out. After all the mess, it has been revealed that the “AskFM” account belongs to someone else with the same name, age, and hometown as AESPA’s Winter. The South Korean singer has been a lot in every media channel’s headline for this new tangled-up situation with “not-so” her account. The whole Korean online community was buzzing with the leaked-up news about an “AskFM” account belonging to someone by the name of Kim Min Jung.

Now, the twist was that the account holder has the same name and residential place as Winter. And that’s what began all the controversies about a simple account on a platform. It was quite a mess for both the artist and the real account holder. Because the whole Korean media, especially the online one, was going nuts about this whole misunderstood issue. All in all, it was nothing else but some exactly similar facts that sparked this controversy which has led the artist into several media headlines. Here, we are going to do the dissection of these rumors and find out the truth behind the tangled mess. Therefore, without taking any more of your time, let’s take a look inside.

What Are the Rumors Floating Around AESPA Winter’s “AskFM” Account?

The rumors sparked when some fans out there tried to connect the non-existent dots. The entire turmoil has been constructed on the one and only fact that AESPA Winter’s full legal name is the same and that she and Kim Min Jung were born in 2001 and are from the same place, i.e., Yangsan City, Gyeongsang Province, caused the entire turmoil.

Many out there believed the rumor that Winter was the owner of that account in her pre-debut days. It didn’t take long for some offensive screenshot to be circulating all around the internet from the AskFM account, which was falsely claimed to be operated by Winter.

Of course, the screenshots were not peaceful ones. They were labeled as “inappropriate” as they had some offensive content, like some sexual comments about EXO’s Kai. Seeing all of this, Winter was allegedly labeled as “having been problematic as a middle school student”. Moreover, the label was purely groundless.

As per the screenshot shared by some users out there on the internet, she had an answer to a question that was posted almost seven years ago. The question was related to the boy band EXO and whether the user watches them or not. The answer to this was, “I do, actually. And I’m on the lookout for whenever Kai shows some skin.”

And, the screenshot also showed an attached image with the caption: “Your eyes are looking super perverted right now!”.

The screenshots gathered everyone’s attention in a very short span of time. The comments about the same became really malicious, and Winter was being mocked for the account and the content on the same. Regardless, she remained quiet about the alleged allegations stamped on her through different online communities.

Also Read: Everglow’s Yerin To Take A Break For A Month With Her Family

In the midst of all the chaos going around, a Twitter account with the handle “@gimminj53119610” stepped forward, claiming to be Kim Min Jung, the real owner of the account.

She tweeted on January 9, 2022, that indeed she has the same age, name, and residential town as Winter, but she doesn’t know the artist personally. The tweet also read that she is unaware of who came across her AskFm account and circulated all the screenshots online. Kim pointed out that whoever it might be, she is deeply offended by the groundless rumors and malicious comments.

Furthermore, to prove her point, she also uploaded the picture of her Yangsan Joongang Middle School yearbook and also her residential identification card. Kim also pointed out that the online communities have targeted both her and Winter as victims, and she also pleaded to be left alone.

Kim also talked about taking legal action against all malicious and offensive posts and comments. She warned about pressing charges of defamation and sexual harassment.

Also Read: Jae Apologizes To Jamie For Her Distasteful Comment on Her

‘Tinted With You Episode 8’: The Final Turn of Events!

Who Does Petra End Up With In Jane The Virgin?