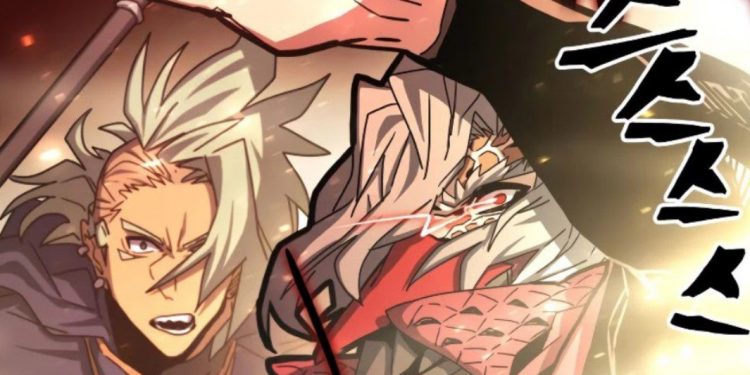 A Returner's Magic Should Be Special Chapter 175

Arzeria reveals his duel with Demon Crow after waking up coma in A Returner’s Magic Should Be Special Chapter 175. A Returner’s Magic Should Be Special has returned after taking a break. Davey and the other warriors recently learned that Arzeria had recovered. Inside Arzeria’s room, he gets final treatment and realizes that Demon Crow won’t accept defeat. He knows that a shark would never let go of anything inside its jaws. During Demon Crow vs. Arzeria, he notices that Crow fled the scene using a magic spell. Arzeria uses a shield to cover everyone since Crow planted the bomb before leaving the scene.

During the explosion, Arzeria notices that his team would get hurt and use his body as a shield. That helped him prevent his team from being blown away and save everyone. But he is the only one who is wounded. Crow escaped and left everyone on the ground. Arzeria was sleeping before Crow left and heard everything Crow told his minions. Crow gets worried about Desir Arman and his men since they have to face them when they recover. He knows that he will die if he fights Desir in his state.

Crow underlings were shocked after learning that Desir Arman defeated the high-level Homunculus. But they know even though Homunculus got defeated, Crow has other trump cards he can summon. They realize that there is other Homunculus potent than the current one. Arzeria heard that and knows that Desir is in danger. Crow seeks to see Desir’s dead body. Arzeria can’t move, and he has to tell Desir about the other monsters and that there is another Homunculus. He falls unconscious, and the doctors take him to the HQ. Later Arzeria woke up and told the doctors what had happened.

A Returner’s Magic Should Be Special Chapter 174 Updates

The doctors warn the higher-ups, and the news reaches Desir’s ears. Desir was surprised since he thought the Homunculus he defeated was the last one. He enters Arzeria’s room and finds him sitting on the bed. Arzeria tells Desir the incidents and what the doctors told him. Desir realizes that he can get advice from his master. He realizes that he might burden Arzeria if they talk about those incidents and reminds Arzeria to focus on recovering. Desir reminds Kelt to treat Arzeria, and he wants to go somewhere.

Kelt accepts that, but Arzearia reminds Desir to be careful. Desir told him not to worry about the war and focus on healing. He realizes that the Homunculus out there might be more robust than he thinks, and he is relieved that he obtained the 4th magic circle. Desir wonders what will happen when he encounters the next Homunculus. He realizes that guy can summon many of them. Desir walks alone in the passage and hears a voice talking with him. He realizes that it is a lady and wonders who that lady is.

The lady told him that she didn’t expect to meet with the mighty hero soon. Desir believes that the lady uses a Southern accent and realizes that is how they spoke from that side when they met with a person for the first time, and they greet a person later. He asks her name and what she wants. The lady says she wanted to see the famous Desir Arman, who didn’t attack when she appeared. She told him that she had seen enough and they would meet soon. The lady fled the scene, and Desir realized that it might be “Her.”

A Returner’s Magic Should Be Special Chapter 175 Release Date

A Returner’s Magic Should Be Special Chapter 175 will be released on 8 January 2022. Desir wonders why she said they would meet soon since she is the royal guard. At the Divine Kingdom, Crow got better and talked with another Masked Demon. He believed that the Masked Demon could die at the hands of Desir Arman since he underestimated Desir. He knows that he is the boss, but the Masked Demon wants to face Desir, who gives him a hard time. Let’s look at A Returner’s Magic Should Be Special Chapter 175 official details.

You will be able to read A Returner’s Magic Should Be Special Chapter 175 online on various websites. The Masked Demon keeps on bragging, and Crow felt like killing him before Desir. The Masked Demon told Crow that he is not good when he talks in that condition, especially about killing. They discuss the secrets of the Divine Kingdom the officials killed since they go against the king.

The Masked Demon reveals that he demoted Aron, the leader of the Divide team; since Aron is helpful, Crow knows that Desir has acquired the 4th magic circle. In the basement, a monstrous guy arrives. A Returner’s Magic-Should-Be Special Chapter 175 spoilers will release soon. Let’s meet when A Returner’s Magic-Should-Be Special Chapter 175 is released.

Tags: A Returner's Magic Should Be Special
ShareTweetShareSharePinSend
Previous Post