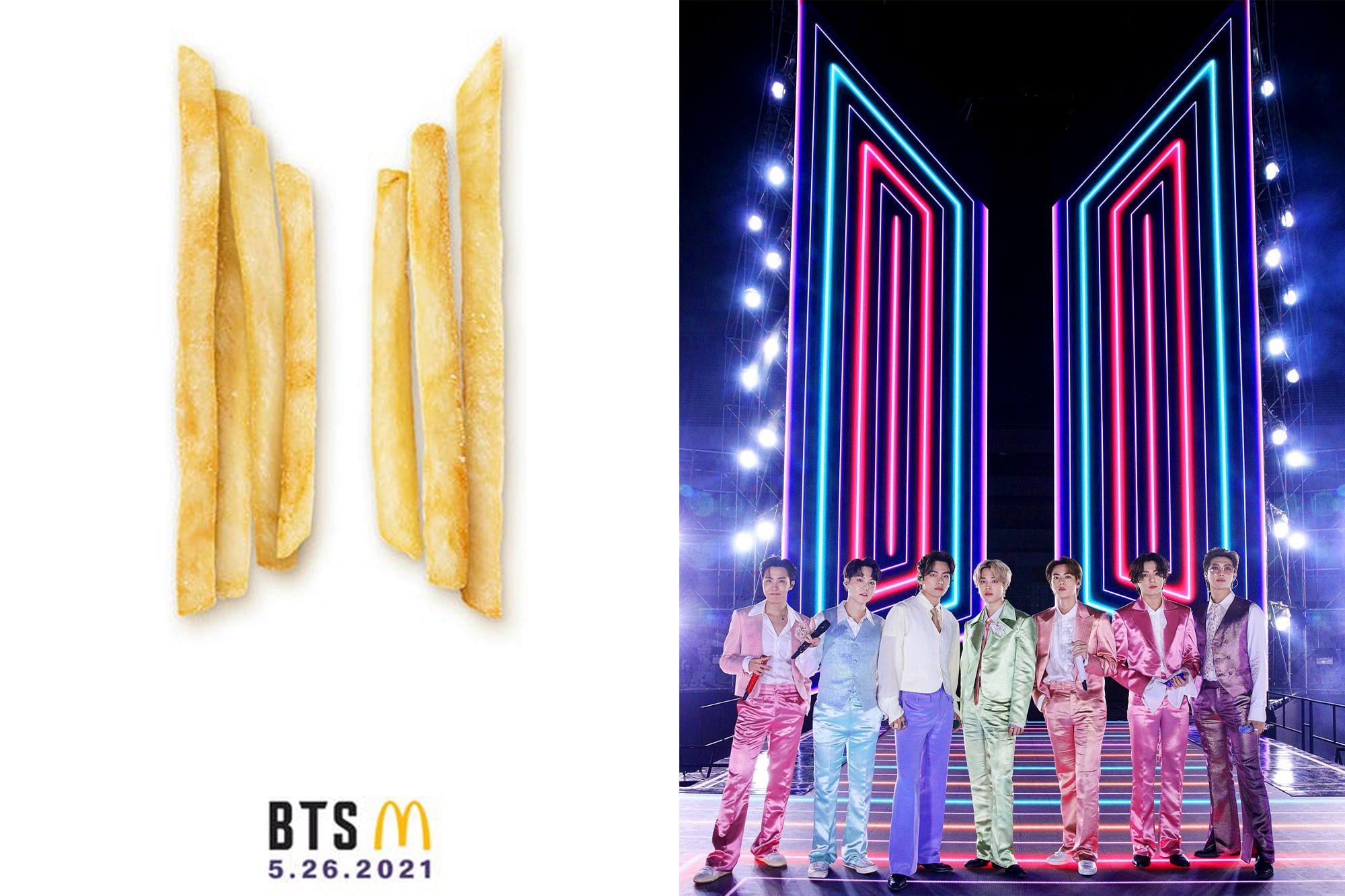 Food and BTS, our favorite things coming together? Yes, it is true. Food chain McDonald’s just announced that they are all set to launch a BTS celebrity meal at all their outlets. The superstars have previously associated with brands like Puma, Fila, Hyundai, Samsung, and many more. Moreover, they have a collab with Baskin Robbins, but sadly, their product was only available in South Korea. However, the McDonalds menu will be available in several countries. So, get ready to devour the taste of South Korea in your nearest Mcdonald’s outlets.

The food chain has previously launched a celebrity menu in collaboration with artists like J. Balvina and Traviss Scott. And it’s high time we get to see the biggest boyband do the same. We can clearly see thousands of armies lining up outside McDonald’s to get the BTS meal. We just hope that they don’t sell out the stock like they usually do.

The partnering between the two has a lot in store. From technical information to menu to the list of countries it will launch in. This is the first time McDonald’s is launching a celebrity Meal that will be available globally. It’s no surprise when we say that BTS likes to do things on a huge scale. Also, both McDonalds and BTS have fans in all corners of the world.

So, go ahead and catch all the details on the new partnering.

By now, all that armies want to know is when the meal will be available to munch on? Also, what all will be on the menu. Will there be an exciting gift? To make it better than the “happy meal.” Calm down. We will tell you everything.

BTS’s celebrity meal in collaboration with McD will launch in May and June. Also, in South Korea, the meal will get live on May 27. In addition to this, it will launch on 26th May in the United States, Canada, Brazil, and 50 other countries. The list will include nations from six continents.

As for the menu, it will contain the “Superstar band’s signature order,” as announced by the company. The company says that the band has several memories of McDonald’s. “We’re excited about this collaboration and can’t wait to share the BTS Meal with the world.” They added. 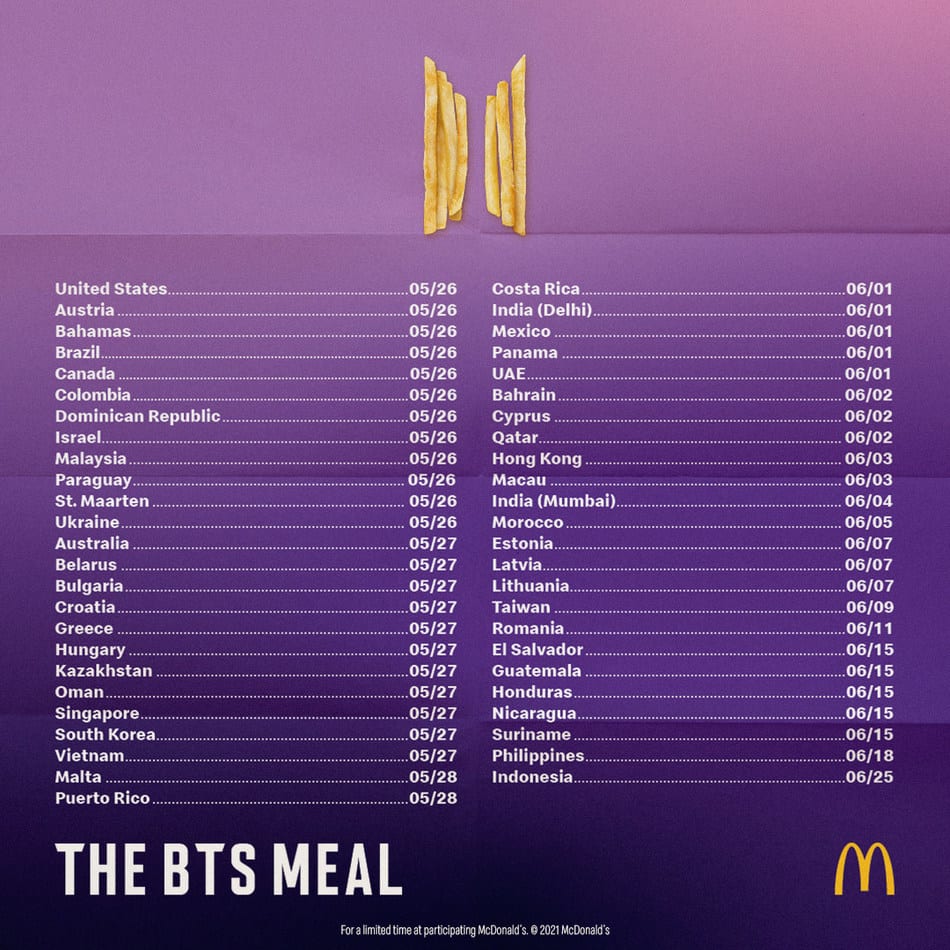 The meal will include 10 piece Chicken McNuggets, medium fries, and Coke. Also, sweet chili and cajun flavors dip sauces will make their debut in other countries. These recipes are inspired by South Korea’s Mcdonald’s restaurants.

Morgan Flatley, chief marketing officer for McDonald’s USA, also expressed her thoughts on the collaboration. She said that they are excited to bring the armies closer to their favorite band. Flately also said that They (McD) wants to introduce BTS’s signature order to the world.

The fans know what they are ordering from McDonald’s next. And it’s on our list too. So, get ready for your Happy Meals. Oops. We meant BTS Meals.

BTS and Thier Success.

It’s no surprise that BTS stands at the peak of the music industry. In 2019, the band had 3 number-one albums on Billboard 200 in less than a year. Only  The Beatles and The Monkees had done this before, but now BTS is on the list too. With their powerful lyrics and attempt to make the world a better place, BTS has successfully earned a BTS Army of more than 40 million from across the globe. 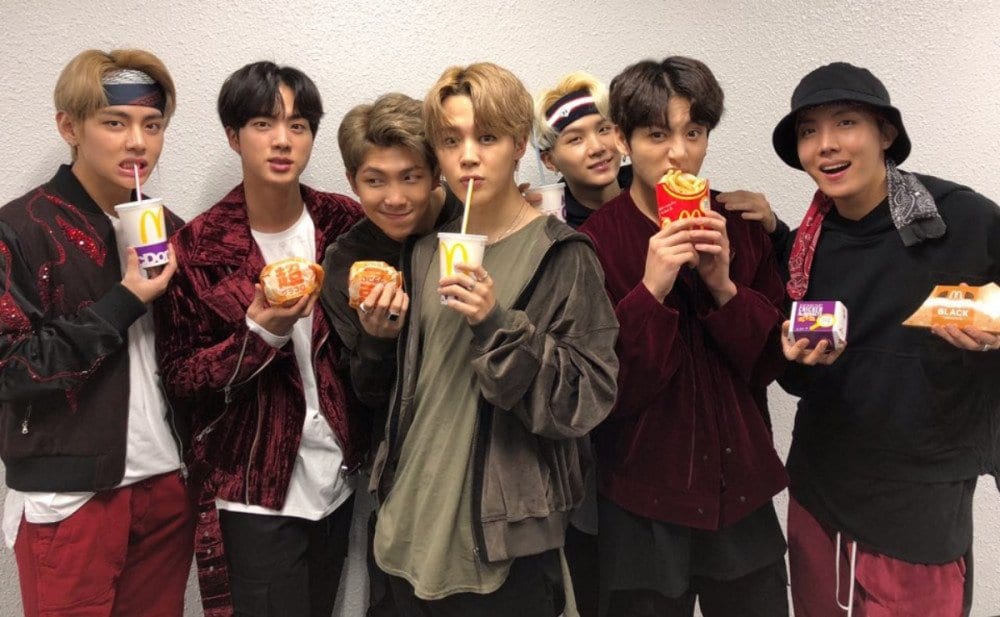 Thier single Dynamite has been breaking several records ever since its release. It’s a song of joy and hope, and you must listen to it. we bet you can’t stop. It also got BTS thier first Grammy, and it recently crossed 1 Billion views on Youtube.

Undoubtedly, there is nothing that can stop BTS from dominating the music industry, and we are nothing but proud of the septet.