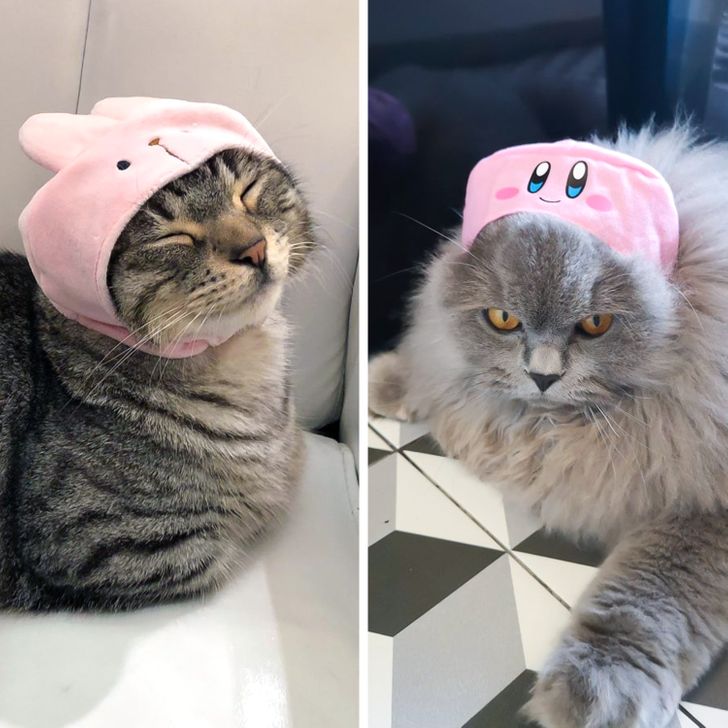 People buy all sorts of presents for their pets thinking they would actually like them. Although, it does not take one second for these very cute creatures to wreck your plans and enjoy the gifts in a very different way. Dogs, especially cats, have their own mind and a sense of understanding. What they perceive is beyond us. I mean, have you ever bought a brand new cushion or bed for your cat but instead liked to stay in the cardboard box that the product came in? The answer is obviously yes. Cats love tiny boxes.

Pets are actually very reasonable creatures. After being with a human, understanding their methods and everything, these creatures start to adapt. They start enacting your habits and portray the same. You might have noticed that the dog likes to sleep on your bed rather than on its own. It’s always like this. They misinterpret our intentions, whether it may be gifts or just some tight cuddles but they do so in the cutest manner possible.

In the end, it is all based on the naivety of these animals that touch our hearts. Well, sometimes this naivety actually turns too hilarious to handle. There are a million pet owners around the world. We decided to combine a few of their pictures from them that show how their pets decided to live on their own terms and chose to ignore the perfect gifts candidly.

1. Cats Like Cardboard Boxes Better Than Homes and Issa FACT! 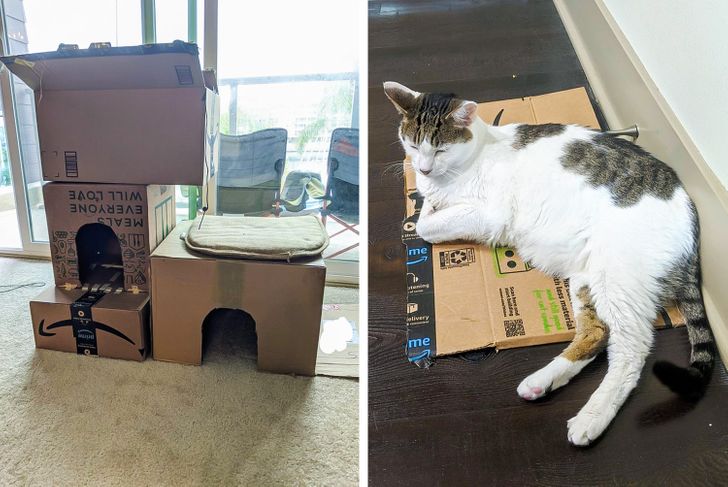 You can’t deny this, you can bring the most comfortable bed in the world, but a cat will choose a cardboard box over it. 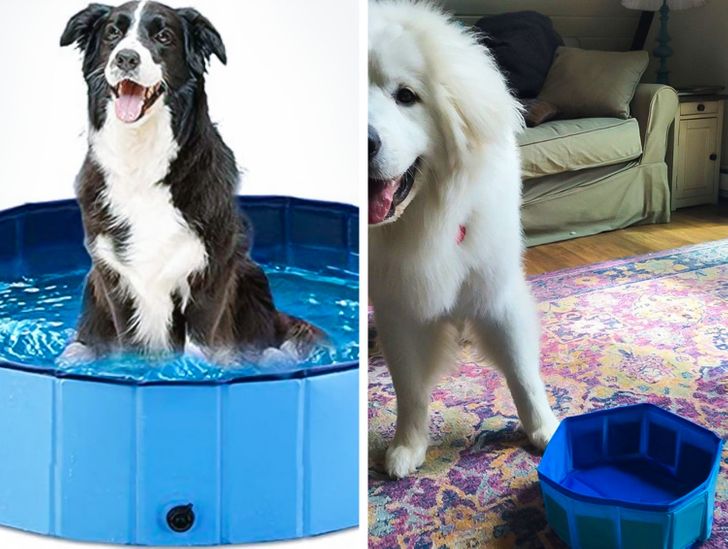 The best part about this purchase is how the dog is perfectly happy with the gift even though it is malfunctioning. I guess it is the thought that counts people! 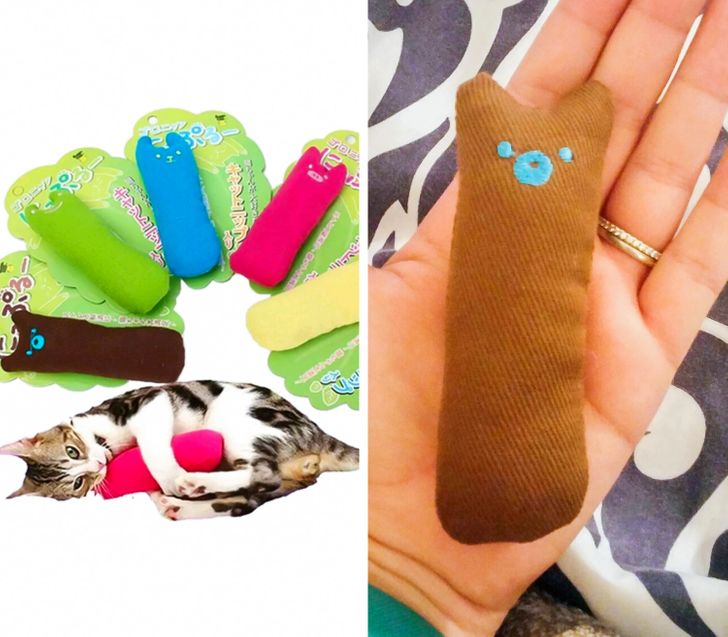 I think there has been some mistake with the sizing or the cat in the picture is just really tiny.

4. When You Order Cat Food and They Get You Cat Food! 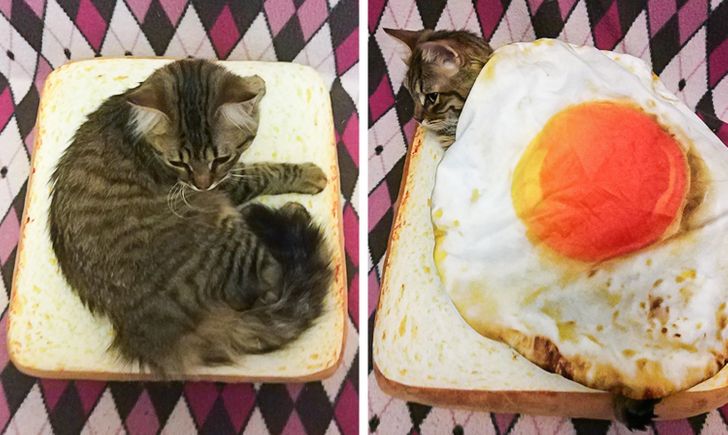 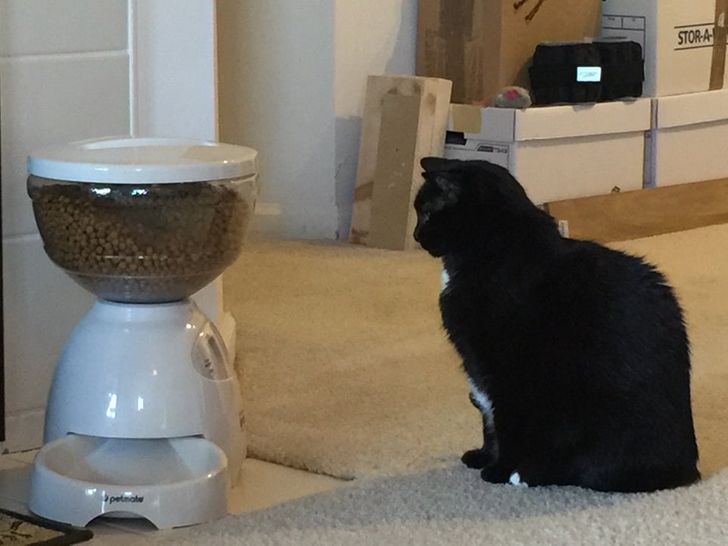 There are literally so many videos of cats demanding food from the automatic cat feeder on Instagram right now. I guess, this image sums it up pretty well. 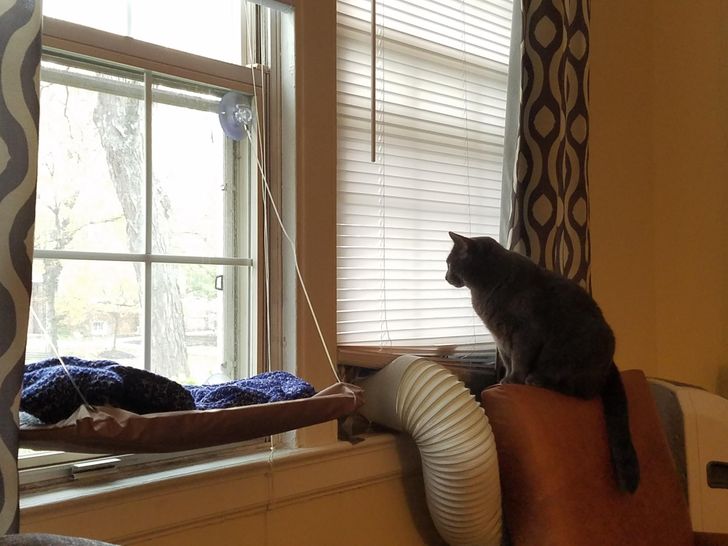 This pet owner bought their cat a perfectly functioning window hammock. But the creature decided to do the activity in its own way. Truly, cats can never be understood. 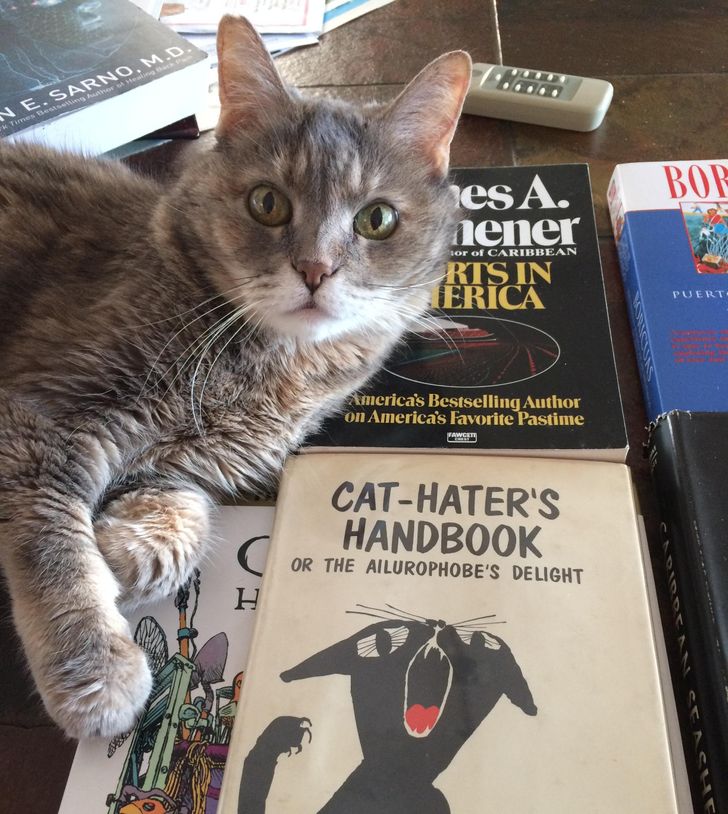 8. When you order a happy cat but they are not just anymore.

This pet owner tried to make their cat look cuter with an accessory but the baby refused.

9. Another example of cats being cats. 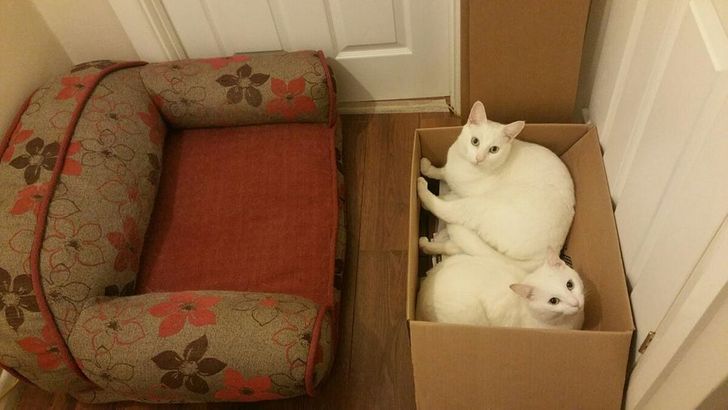 10. Yet another example of cats ignoring comfortable beds for weird places. 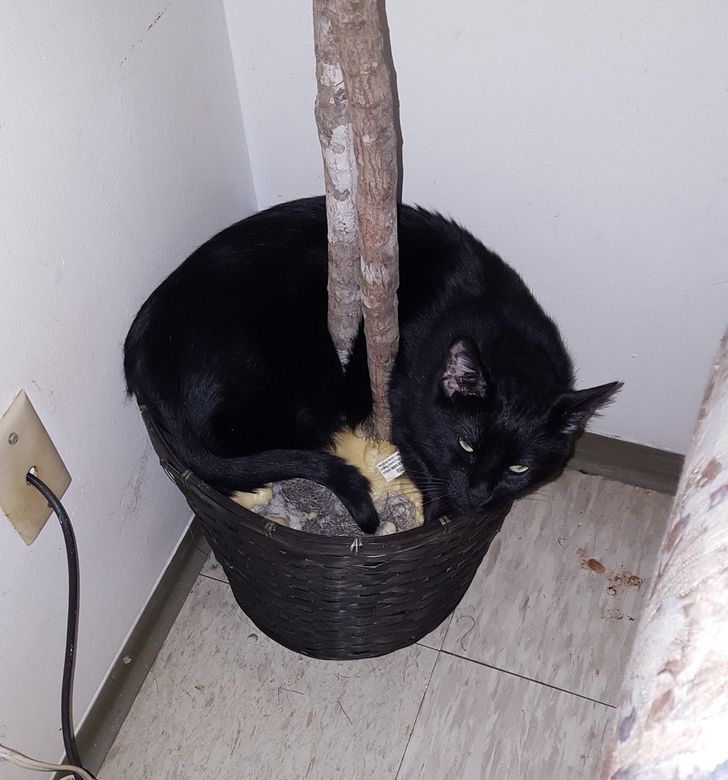 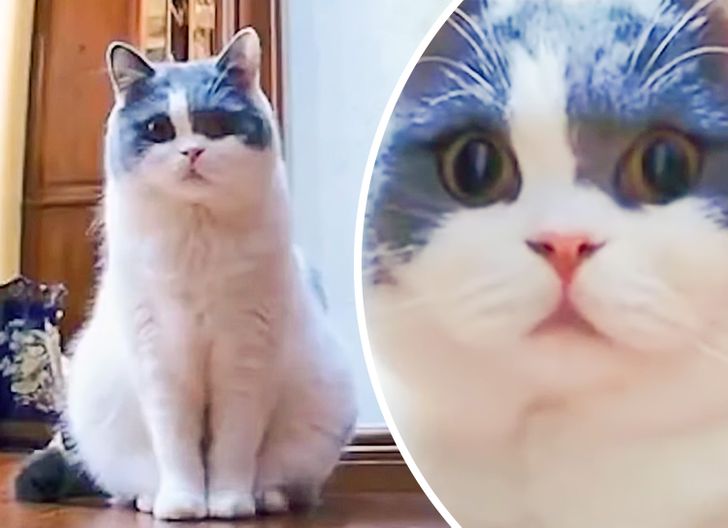 I know it’s very rare to actually see a cat that demands your attention. Knowing cats, are the most self-reliant creatures on Earth. But this picture moved us when we saw the kitty being sad and missing its owner waiting for them. 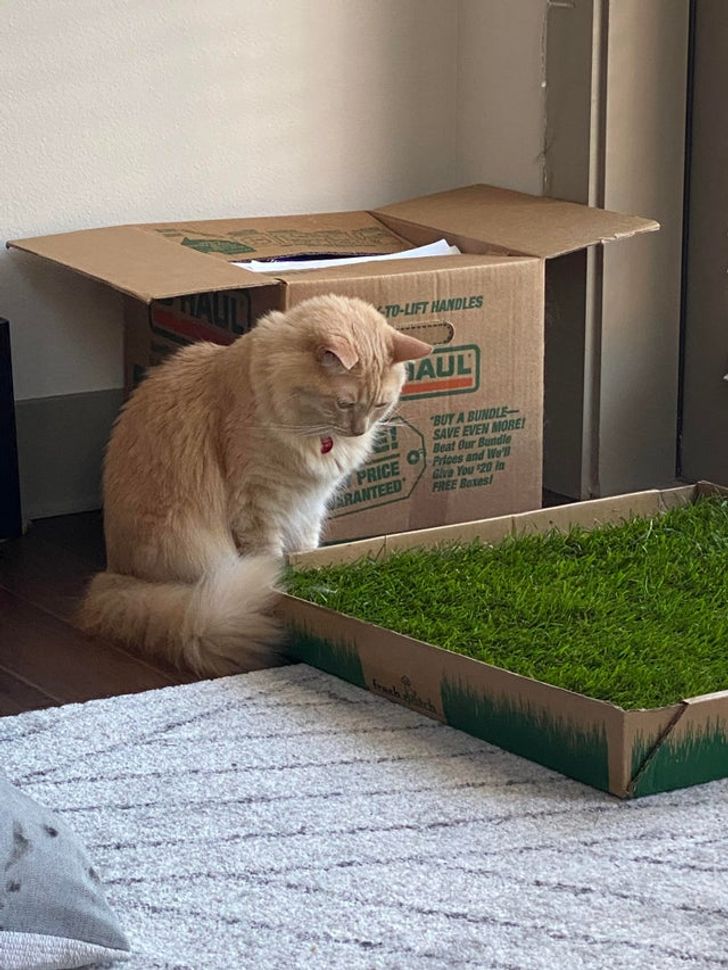 The owner bought some indoor grass and the cat just cannot process its presence.

13. Yet another example of cats not choosing the bed. 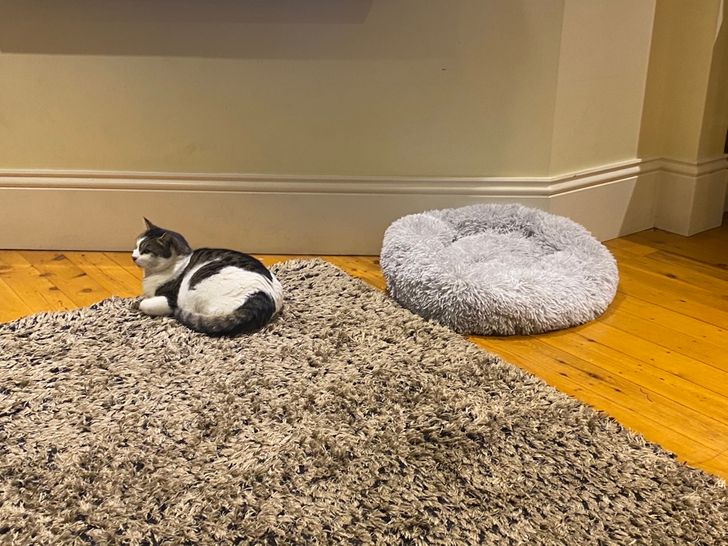 14. I Think This Dog Is Secretly A Cat 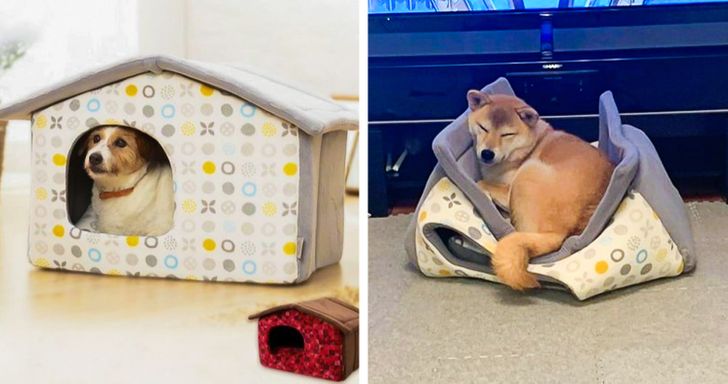 I mean, dogs generally love the concept of bees that are bought for them. Although, this dog decided to reinvent the whole structure and make his own home. I think it’s a decoy dog and really a cat.

Also read: Will There Be a Sequel of DC’s Super Pets?