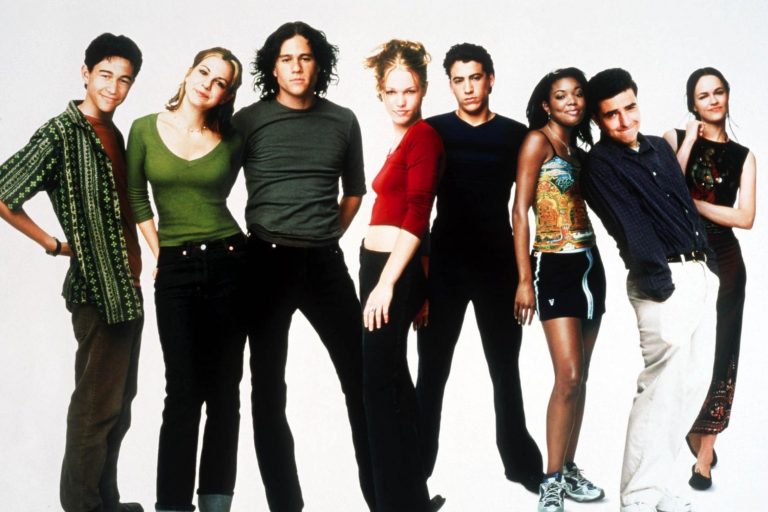 10 Romantic Films to Stream on Disney Plus In 2020

Disney has always been known to make good romance, fantasy and adventure films, some films are even got oscar nominations and considered to be top films of all time. From animation to live-action, some films are that good that they are on the top of our all-time. Favorite films. So here are the ten films that you should watch if you love classy, romantic films.

10 Things I Hate About You is a Romantic comedy film that is a modernized version of Shakespeare’s play Taming of the Shrew. In the story, a new student named Cameron wants to date Bianca in order to date her. She has to also get a date for her elder sister. Heath Ledger plays Patrick, the guy who dates kat.
All cast were praised for their acting, especially Ledger and joseph. A tv series was also developed after the success of this film. You can watch it if you like good old school teen romantic comedies

Freaky Friday is a romantic comedy film that is based on the book of the same name by Mary Rodgers. This film is the third adaptation by Disney of the book. It gets a cult status among fans of the book and the film and also gets commercial success. Anna Coleman, an aspiring musician who lives with her widowed mother, gets in trouble when their bodies got switched by eating a fortune cookie. The movie got several awards like MTV and teen choice awards. You can watch this film if you are a fan of Lindsay Lohan.

Alladin is the live-action remake of the hit Disney series; it is loosely based on the One Thousand and One Nights. The plot follows Aladdin, a street urchin, as he falls in love with Princess Jasmine, befriends a wish-granting Genie, and battles the wicked Jafar. It was a smash hit and grossed over 1 billion USD and becomes the 9th highest-grossing film of 2019. It got praise from critics for its score, costume design and acting performances of Smith, Mena, and scoot but got negative reviews for the direction of the film

4. Beauty And The Beast

Beauty and the Beast is the live-action remake of Disney’s animated film of the same name, which was released in 1991, It stars Emma Watson and dan stevens as Belle and beast. The film also got two Oscar nominations for best production design and costume design for its achievement in both categories. It grossed over 1.2 billion USD and is the 17th highest-grossing film of all time.
It is a classic romantic tale between a girl named Belle and a prince who is cursed called beast, they fall in love and then the story has a happy ending. You can watch it now on Disney+.

5. The Princess and the Frog

The princess and the frog is an animated film which marks a brief return of Disney production style that is classic 2d animation. It was both critically and the commercially successful film grossed around 271 Million USD. It is a modern-day retelling of a classic story the frog prince. The film follows the story of a waitress named Tina who wants to open her own restaurant and a carefree prince named Naveen. Prince Naveen is transformed into a frog by a conniving voodoo magician and Tiana, following suit, upon kissing the amphibian royalty. With the help of an alligator, a firefly, and an old blind lady who lives in a boat in a tree, Naveen and Tiana must race to break the spell and fulfil their dreams

Tanged is a film based on a German fairy tale called Rapunzel; It is one of the best-animated films of all time. After receiving healing powers, baby Rapunzel is kidnapped and taken into a tower by mother Gothel. Now she is locked into the tower one day a thief called Fyne comes to tower and rescue her. Watch it now on Disney+.

7. Lady and the Tramp

Lady and the Tramp is a live-action remake of the film of the same name by Disney. The film follows the tale of a dog named lady who falls in love with a street dog. The film got mixed reviews, got praise for acting but lack a good story and VFX.

The princess diaries is a film that was released in 2001 and was a commercial success. It stars Anna Hathway as a shy teen girl who discovers that she is a princess of a small European state and must prove to her grandmother that she can be a princess, Anna got praised of her performance in the film.

9. Confessions of a Teenage Drama Queen

Confessions of a Teenage Drama Queen is a film that was released in 2004 but was a moderate hit. It stars Lindsay Lohan in a titular role as a teen rock band member who falls for a boy and befriends the most unpopular girl in school and has to face Carla in a competition(n most popular girl in school).

Cinderella is a reimagining of a classic tale of love, it was released in 2015 and starred Lilly James as Ella. It was a moderately successful film. You can watch it if you love classic stories and love stories.