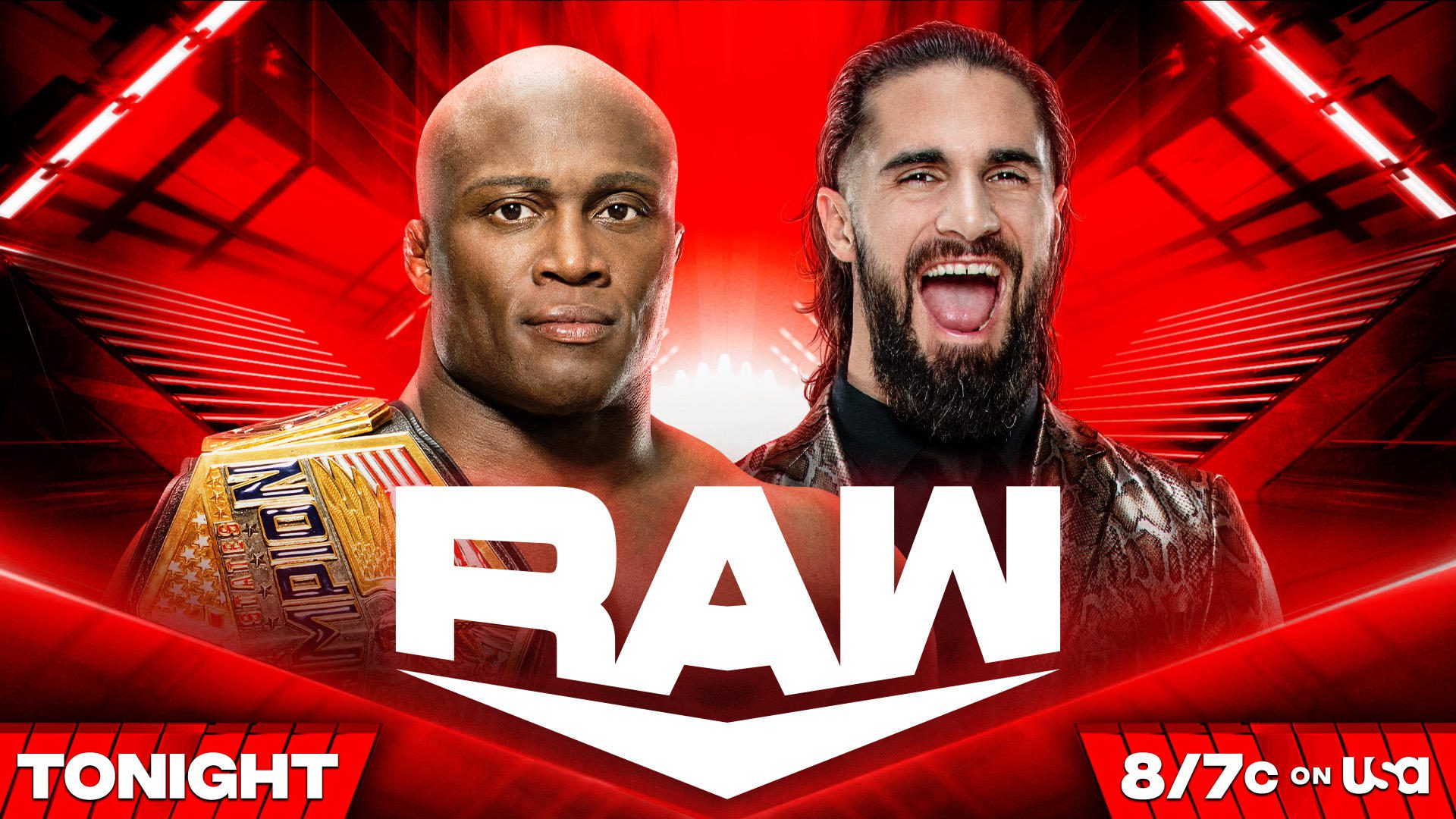 The road to Extreme Rules 2022 will pass through Raw, which features a brand-new match between Seth Rollins and Bobby Lashley for the US Championship. This week’s episode of Raw will focus on the consequences of a strong episode from September 12 that witnessed a significant storyline development and title change.

In another confirmed contest, Mr. Money in the Bank will square off against the hardened Kevin Owens as their rivalry continues to heat up. We might also get some build-up to the Roman Reigns vs. Logan Paul match at Crown Jewels.

When the September 19 edition of Monday Night Raw comes from the SAP Arena in San Jose, California, Judgment Day will continue its reign of terror while the potential next women’s title challenger will celebrate her return.

It appears that Triple H wants to guarantee that viewers on Raw see the US title as a “credible prize.” Of course, this should always be the aim, but Vince McMahon’s creative vision frequently resulted in mid-card titles having little to no worth. The mid-card championship on Raw should be highlighted in particular because it is theoretically the highest-ranking men’s title on the show. In 2022, Raw has hardly ever shown the WWE championship due to the championship runs of part-timers Roman Reigns and Brock Lesnar. 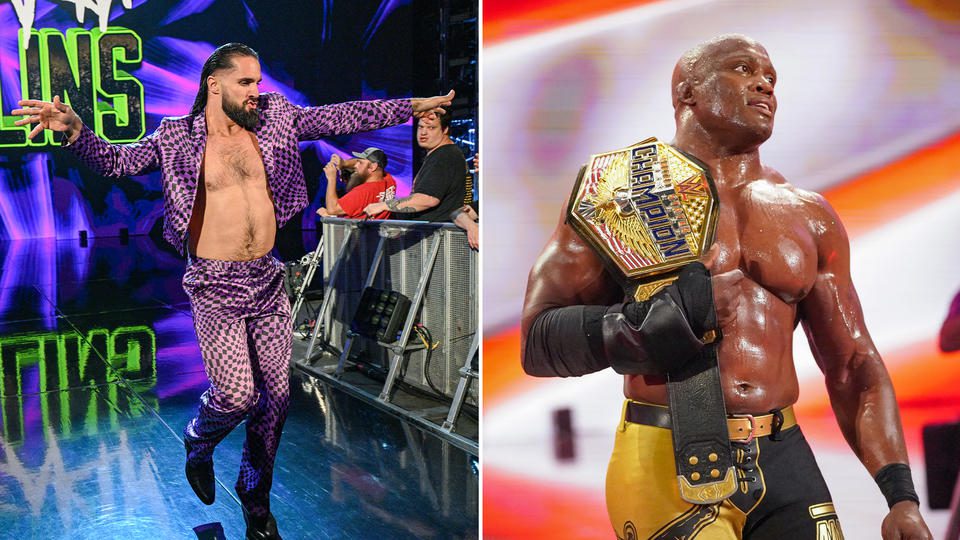 How can the mid-card title become more significant? Have the winner constantly defend it in exciting TV matches! Bobby Lashley, the current US Champion, is the fighter who is giving the title newfound respect. On July 2 at Money in the Bank, Lashley defeated Austin Theory to win the US Championship. Rollins is now the fourth contender for the championship since Lashley successfully defended it against AJ Styles, Ciampa, and The Miz.

The US Champion Bobby Lashley took issue with Rollins’ declaration that he was the face of Monday Night Raw because he is the one “who holds the gold,” and it should be a requirement for designation as the red brand’s face. Rollins wasn’t in the mindset to face Lashley for the championship, but after laying out a challenge, he said he “would happily take [it] off [his] shoulders.” It was immediately agreed, and as a result, Raw will now feature a fascinating match between these two top talents for the prized mid-card title. 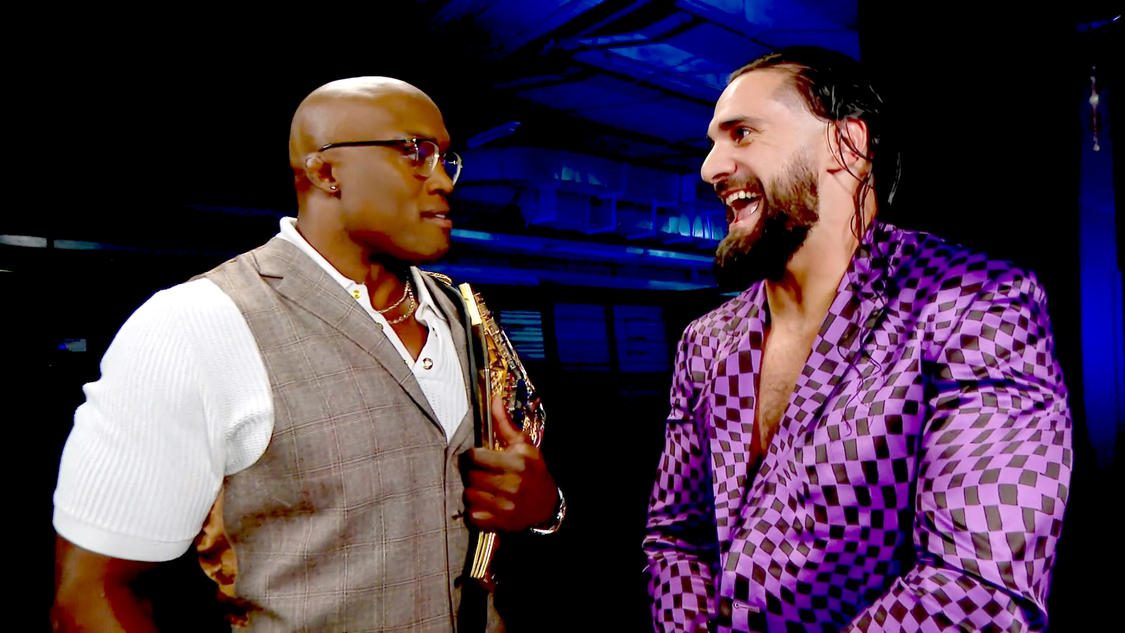 Without a doubt, this is Lashley’s ultimate challenge to date as the US Champion and possibly his greatest test since his battle with Omos earlier this year. The majority of the WWE Universe has been rooting for Lashley during his US Title defenses, which have been a highlight of RAW. Given that these are two of the top guys on Raw right now, it will be interesting to watch who wins in this match. Since Roman Reigns, the undisputed WWE Universal Champion, is currently almost exclusively a Smackdown star, the U.S. championship serves as the de facto top belt on Raw.

Matt Riddle probably will play some sort of part in how this match ends. The Original Bro may have to repay Seth for costing Matt his bout against Finn Balor last week.

According to the greatest piece of weekend news, Roman Reigns will defend his belts against Logan Paul at Crown Jewel in November. This show is being heavily promoted by the company, which even hosted a press conference in Vegas on Saturday. Reigns is primarily a Smackdown star and have been limited to that program, as was previously mentioned. But it wouldn’t surprise me if they did something today to increase publicity for the match.

Austin Theory, 25, and Kevin Owens have been at odds with one another. The former World Champ Owens has put the Money in the Bank winner in his place while he has been bitching around. Despite becoming a babyface superstar, Kevin Owens is back again in the Prizefighter mode. Therefore, he had no trouble humiliating Austin Theory during a remarkable promo session on last week’s episode of Raw. 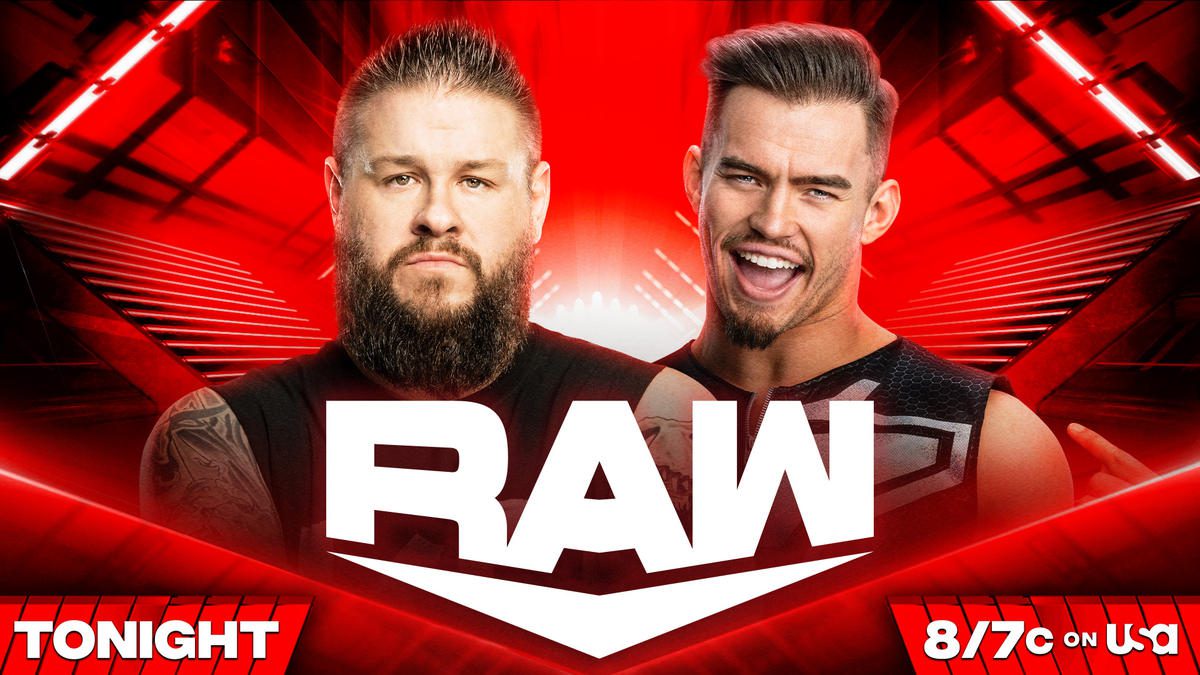 Also, Ownes defeated the emerging star on RAW two weeks ago. Theory publicly criticized Johnny Gargano. He was interrupted by Owens, who said Theory had been given everything and predicted his demise. Theory was slapped by Owens after he said Theory lacked the skills necessary to lead the WWE into the future. This sparked a fight inside the ring. WWE representatives had to intervene and separate the two because the fight was that intense.

The two have been involved in numerous brawls over the recent weeks, and talking is no longer an option. In light of this, KO is scheduled to face Theory in what is anticipated to be a highly physical matchup as the two attempts to work out their issues. This week, the two will engage in a rematch. Given that they will be even at that point (1-1), if Theory triumphs, which seems likely, it will mostly establish a trilogy match at Extreme Rules 2022.

Technically, DAMAGE CTRL’s Dakota Kai and IYO SKY were robbed off during their match against Aliyah and Raquel Rodriguez in the WWE Women’s Tag Team Tournament Final two weeks ago. Kai was even pinned unfairly in the match by Aliyah, who thus won the title.

Many believed they would win the championship, but that didn’t actually happen. However, following months of inaction and backstage commotion, the two might be the ones to eventually reignite the women’s tag division. As a result, the two teams had a rematch, and this time, DAMAGE CTRL’s captain pulled some ringside shenanigans, which gave Kai the opportunity to pin Aliyah with a backbreaker and win the title for their team. 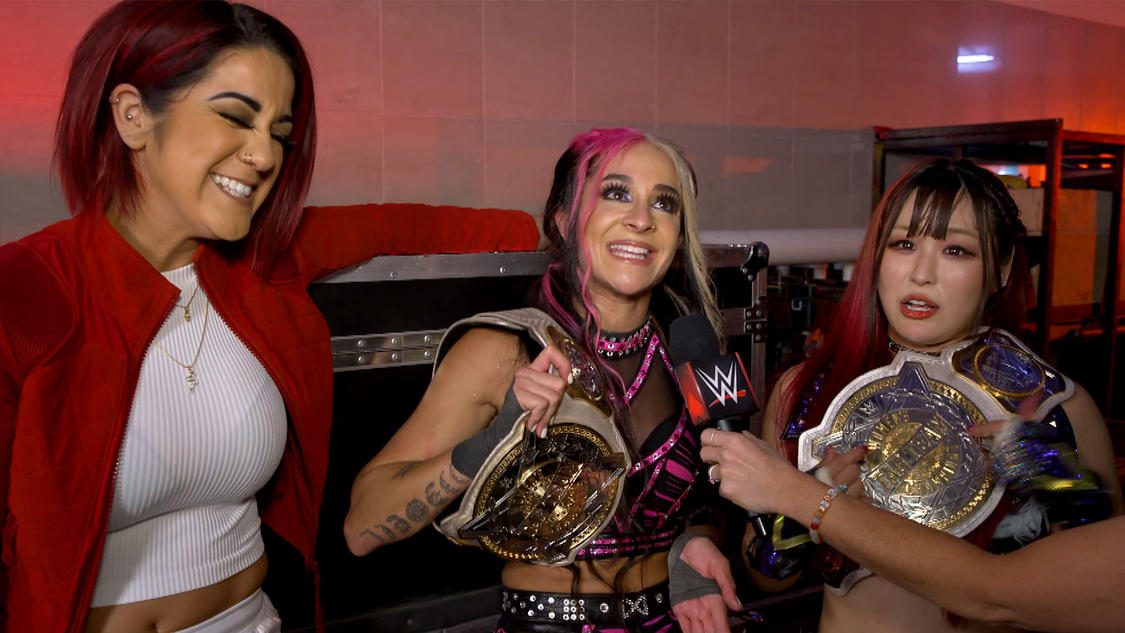 It’s time for Bayley to take a chance at the Raw Women’s Title now that her partners have won the gold. After all, she earned the chance by pin falling Bianca Belair, the champion, in the non-title 6-woman tag team match at Clash at the Castle. Bayley can’t honestly think of a better venue to issue the challenge to Belair than tonight’s WWE Raw, which is broadcast from Bayley’s hometown of San Jose. Thus, the title match will either happen tonight or at the Extreme Rules PLE in October.

Bianca Belair, the RAW Women’s Champion, successfully defended her championship last week against Sonya Deville. But Bayley and Damage Control made it clear that they intended to seize all the gold.

This implies that Bayley will continue her rivalry with Bianca Belair, whom she left last year before suffering an injury. The Women’s championship looks to be heading in the direction of Bayley vs. Belair, so it wouldn’t be shocking to see a match between the two of them announced officially for Extreme Rules. Even if Belair’s reign as champion in 2022 has lasted longer than it did in 2021, it might all come to an abrupt end at the hands of Bayley.

On last week’s Raw main event, Edge was out for vengeance on Dominik Mysterio, but he got tangled up with the latter’s friends. Even though Edge had the advantage at times, Rhea Ripley would give Dominik the hypeman treatment until the fight ultimately ended in a no contest. The WWE Hall of Famer found the number game to be too much for him, and Judgment Day jumped on him, breaking both of his legs. 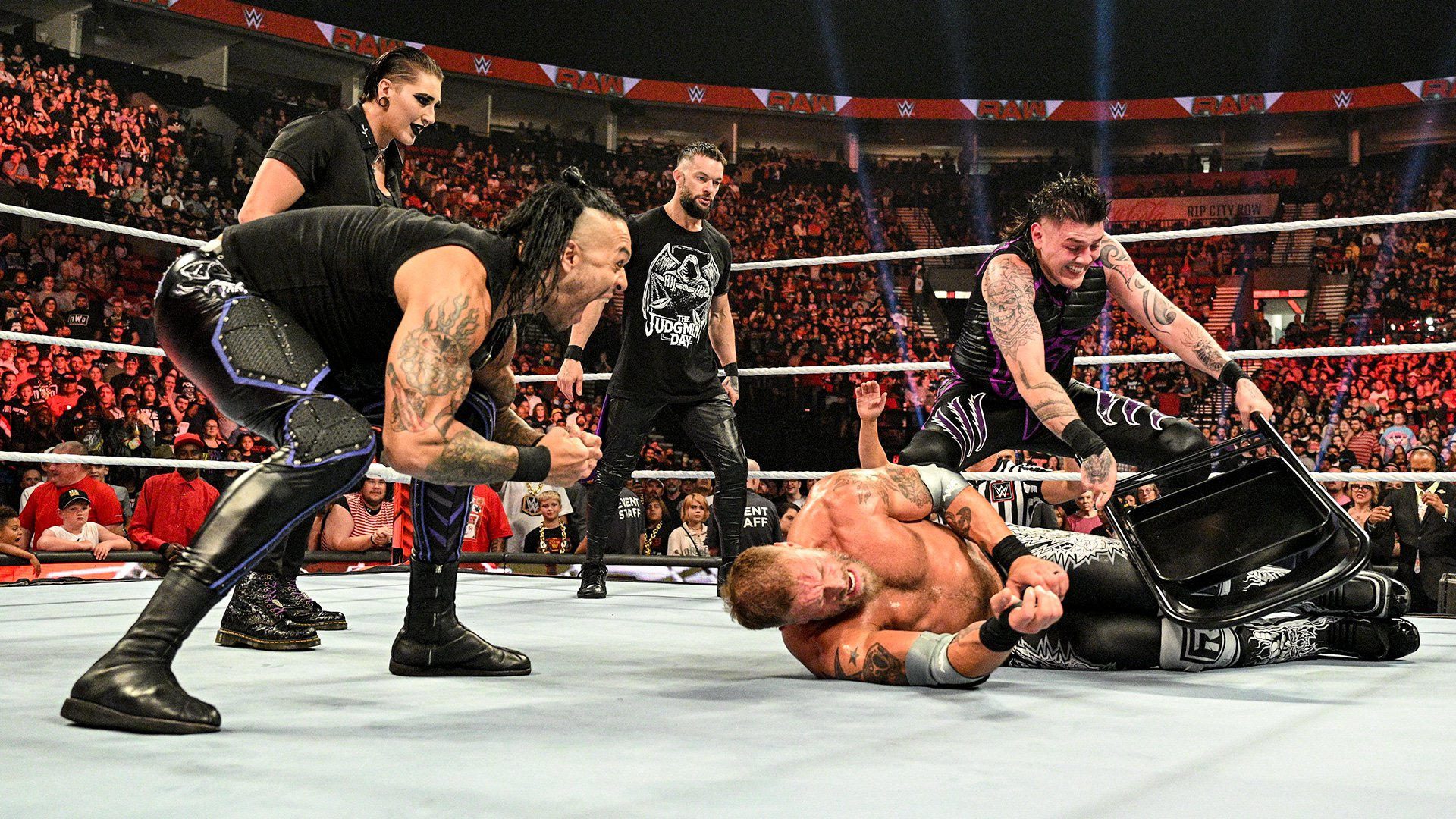 The show closed with Dominik viciously attacking the 11-time Champ and The Judgment Day stood tall to close the show, despite the likely disappointing ending. The legendary superstar will undoubtedly be absent from WWE TV for at least a few weeks after receiving several hits from steel chairs and a Coup de Grace.  Judgment Day might be on the lookout for their next victim as we wait to learn more about his health.

WWE Raw 1530 will air at 8 PM ET on USA Network. New episodes of WWE Raw are released every Monday. If you have USA Network on your TV, then you could just tune in at the above-mentioned time. But, if for some reason you missed the show while it was airing live or you prefer Streaming WWE Raw, then there are several Streaming options available.

USA Network comes under NBCUniversal, so you will find major streaming platforms offering the Bet work in their base plans. Streaming platforms like fuboTV, DIRECTV STREAM, Sling TV, and Hulu Live TV will allow you to watch Raw live from anywhere. YouTube TV is the platform where you should go if you want to watch both WWE Raw and Smackdown.