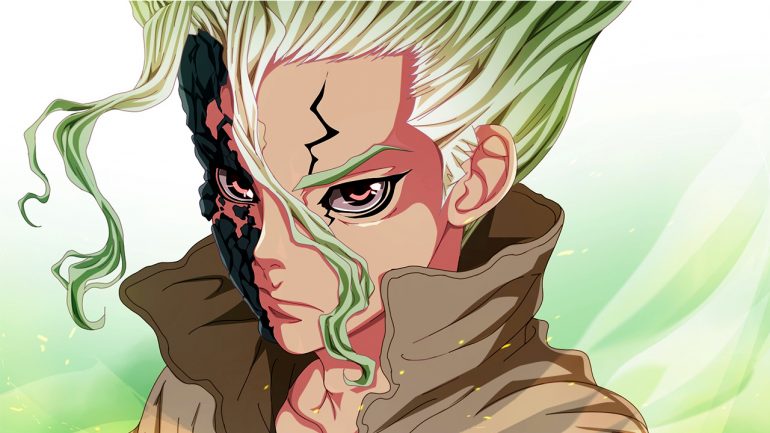 There was a major blowback to Senku’s plan when the expert Sniper of Dr. Xeno almost killed him with a bullet to the chest. Senku was saved by his quick thinking stopping the impending death when he improvised a bulletproof vest out of lab chemicals. Senku avoided life-threatening wounds but he was still gravely injured and the kingdom of science was left without their key scientist.

Chrome and his advance team are digging a hole in the ground to create a tunnel into the main fortress of the enemy. This way, the savage fighters of the Kingdom of Science like Hyoga and Tsukasa can directly invade the headquarters of Dr. Xeno avoiding the deadly sniper. This gives them an element of surprise while the team on the aircraft carrier leads the attack from the front.

Meanwhile, Dr. Xeno boosts a new weapon, something extraordinary that is suitable for the final battle, completed on short notice, to gain an advantage against the Kingdom of Science. Dr. Xeno got defensive after he found out about the petrification device, after the successful deceiving effort by the Kingdom of Science to buy time for themselves. Dr. Xeno also lost another key resource, when Senku convinced Luna to save him from life-threatening bleeding in the Lungs using her nursing skills. Luna was sent as a spy to the Kingdom of Science but she has turned after being impressed by the knowledge of Dr. Senku.

Like all the other popular Shonen manga, Dr. Stone is available to read on the Manga Plus platform. This is the official source of new manga chapters and has a great collection of new and old manga. The next chapter of Dr. Stone, Chapter 164 is scheduled to release on September 6, 2020, at 21:00, Japanese standard time.

The main battle is only a few days away from the perspective of the manga story. Senku was quite better after the healing done by Luna, he was seen in the airplane headed for the lab of Dr. Xeno. The plane is going to be the main defense of the aircraft carrier that is the goal of Dr. Xeno. The advance force is also making progress using their drill to get through to the enemy fortress as soon as possible.

It is not favorable for both sides to lose forces when humanity is already small in size. They would avoid any deadly force and any sign of domination will be enough to get the surrender from the losing side. Dr. Xeno has his new weapon while the advance force of the Kingdom of Science has its element of surprise. In the ultimate showdown, only the strongest will come on top. We are backing the Kingdom of Science to win after all as they are our main protagonists. The forces added from the land of America will pave the way for advances in technology. Xeno and Senku working together for the betterment of humanity are what we would like to see. But before that, its the battle of Science, and only one of them will win.

If Dr. Stone and his team want to win, they have to keep their element of surprise. They have many strong characters that can wreak havoc if they can get inside the enemy fortress. Dr. Xeno has multiple types of Guns but he doesn’t have an arsenal. He also has a small force of people that protects him in the main lab. As the fighters are attacking through the building, there is less space to use heavy artillery. A sudden attack from the inside will almost guarantee the victory for the kingdom of Science even if Dr. Xeno has his secret weapon ready for deployment.