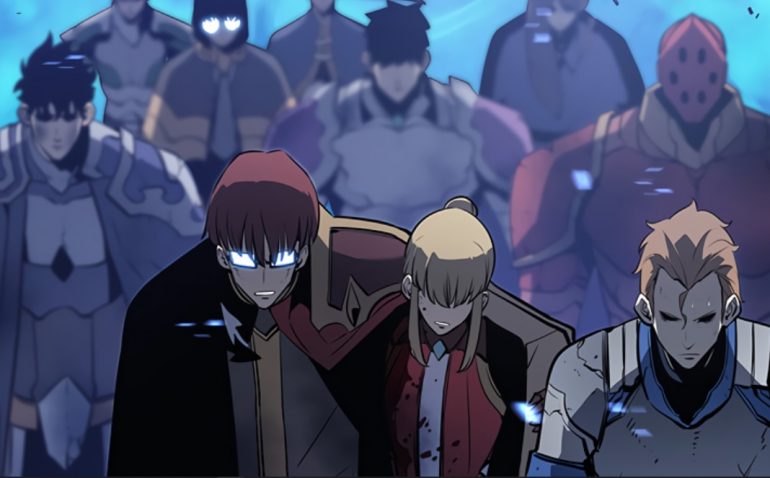 Sung started to hammer King with powerful punches asking him what did he do to his body. Other Hunters are glad that their life savior is back since their time was running out. Sung landed a powerful blow that bangs King with the ground. He stomps his face with his feet, and King said Sung is not the king; how could he stand on that place instead of him. He reveals that Sung has a black heart and how he is managing to control his ego. Sung replies that he has incredible magic because of his heart.

His Black Heart Mana increase to over plus 100000, and the power acknowledge him as its owner. All of his conditions have been met, and he has remembered how to defeat the demon’s King, Baran of white salt. Sung gets angry, asking King to explain what a player is what his intentions are. King thought that the Monarch would stand by him by they point their weapons at him. Sung decided to kill King, and he cuts him into pieces. King thought that he has access to the system by it was blocked.

Solo Leveling Season 2 Chapter 132 will be released on Thursday, 24 December 2020. Keep in mind that every Thursday new chapter of this Manga will be released. The next chapter’s spoilers are not yet available; you can take a look at the following recap and ways to read this Manga below.

At the outside of the C-Rank gate, other Hunters are wondering what is happening inside. It has been an hour since the Hunters Guild members went inside the C-Rank Gate. They think that it will be dangerous if they enter the Gate; while they are still talking, a shadow shows that people are coming out. It is the Hunters with Chief Woo Jin-Chul leading them. Yoo Soo-Hyun is holding injured Myunguchul on her shoulder with other hunters following behind them.

The Hunters are shocked to hear about the casualties since they thought the Hunters has just suffered from severe injuries. Meanwhile, Hunter Sung Jin-Woo is wondering where the body of the real body Architect is. After killing him, he didn’t hear the real answers he was supposed to tell him. It has been revealed that not more than 20 top-ranked Hunters are dead.

Jin-Chul Woo comments that if there had been a Dungeon Break, the casualties would have been more than that. He then asks if it is true that Hunter Sung Jin-Woo singlehandedly blocked the gate on his own. Jin-Chul Woo is not aware that Hunter Sun Jin-Woo is the one who is in front of him. Sun Ji-Woo comments that he doesn’t think the Bravery Guild members will come to help.

He reveals that he asked them to report the Double Dungeon to the Association, and it has caused more casualties. Sung adds that al thanks to the Hunters Guild and the Monitoring Division that made them survive. Jin-Chul Woo reveals that the Division knows all about the movements of S-Rank Hunters. He is the one that asks the Hunters Guild to work with them. The corpses of the dead Hunter are lying down with the rescue team helping the injured hunter.

Jin-Chul Woo said he didn’t know it will end in a disaster like this. He started wondering how Hunter Sung Jin-Woo knows about the existence of a Double Dungeon. While he is still thinking, Hunter Sung Jing-Woo reveals that he was summoned by the Dungeon here. Jin-Chul Woo thinks it is impossible, and Sung said he received a message to come to this location. One of the Hunters taking care of corpses asks if he can show them that message.

Sung replies that the message can be seen in his head. Jin-Chul Woo thinks that Sung is joking, and he doesn’t understand why he is like this with all dead bodies around. Sung Jin-Ah shows up and asks his brother if he is okay. Sung Jin-Woo said he is fine, but he is a little tired, and he falls unconscious. They take care of him while the trucks came and unload about 200000 tons of magic crystals.

It has been revealed that those crystals are more than sufficient to power the Barrier. Yuri Orlove orders them to position the Barrier with the Gate at the center, and the magic will start by drawing upon magic crystals. The magic started drawing, and the Barrier pulls in the magic, and one of the hunters is wondering what is happening. He asks  Yuri Orlove who he is and what he wants, and Yuri looks in the opposite direction.

The guy thinks that a brave person wouldn’t be still nearby when the Dungeon Break is tomorrow. It seems as if Yuri wants to take the credit to himself that he is the one who did the job. Later an unknown Monarch shows up standing on top of the building. The new crew of the Hunter is ready in case if Yuri fails. They think that humans are helpless when they are facing disaster.

Meanwhile, another S-Rank gate has appeared in Maryland; Yuri Orlove wants to be called a man who cleared an S-Rank gate by himself. But he is worried that there is another better Hunter. Yuri started drinking alcohol, bragging that 15 hunters are too small to be his audience. He asks that guy what America is doing and if they send S-Rank Hunters to help. He reveals that drinking will help him not to be nervous and put on a great show.

Read Solo Leveling Season 2 available on Kakao Page Magazine, so you can support the creator by buying the magazine. We highly advise you to support the official release as it supports the creators. Note that there are no official ways to read this Manga.