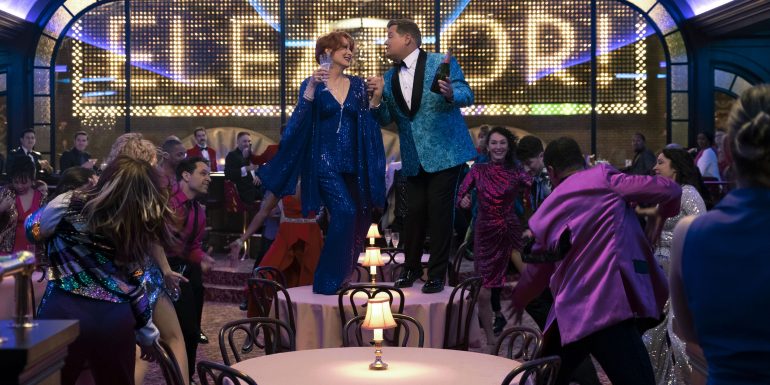 7 Amazing Movies To Watch Like The Prom on Netflix

The Prom is a new film that has been directed by Ryan Murphy. The director is quite known for his work on a variety of successful television shows. All this while, The Prom is a musical comedy film that throws the entire spotlight on four Broadway actors. They all assist a teenage girl in getting in prom with her girlfriend. The film has been adapted from a musical that goes by the same name and has been created by Chad Beguelin along with Matthew Sklar and Bob Martin. We have Beguelin as well as Martin who has written the screenplay of the film. If you have liked this film and are also fond of musicals, then we surely do have a list for you guys.

In this film, we have Bradley Cooper shining just like a star in his directorial debut. This 2018 film serves the task of being a remake of A Star Is Born Musical. The film also has employed Lady Gaga who acts as well as sings beautifully. The film throws the entire spotlight on the story of an alcoholic musician who falls in love with a singer. All this while, the film employs some live performance scenes that come with a beautiful soundtrack. Also, as for its story as well as the emotional gravity, you guys should know that A Star Is Born also works out for those people who are not into musicals too.

This film is entirely adapted from the life story of the British musician, that is, Elton John. Well, you guys should know that the film has all the appropriate ingredients for a delightful musical. The fans are provided with an amazing soundtrack with impressive set pieces along with a variety of dramatic instances that have been performed with brilliance with the actors. The cast list includes Taron Egerton who has graciously portrayed John in the film. Then we have Jamie Bell, Richard Madden as well as Bryce Dallas Howard. This film will prove itself to be a true treat for all the fans who love musicals as well as the music of John.

This is a jukebox musical tale that can be considered as candy for the fans of Swedish pop group ABBA. The film is based on the 1999 musical that goes by the same name. The lead cast of the film includes Meryl Streep along with ChristineVaranski and Prince Brosnan. Then we also have Dominic Cooper among the people who sing this song themselves. The film is about a young bride to be who sets on a journey in order to find a perfect suitor for her mother. She does so by inviting three suitable men to her upcoming wedding. The film features almost all the hits of ABBA such as Dancing Queen as well as Mamma Mia and The Winner Takes It All. There are many reasons to watch this film. It has ABBA’s songs along with a lovely soundtrack with great performances by the actors.

You guys should know that this musical back from 2012 also employs a great deal of comedy. The film has been directed by Jason Mooe while is loosely based on the nonfiction book penned down by Mickey Rapkin that goes by the same name. Pitch Perfect shows us the ups as well as downs in the all-girl acapella group in Barden University to win The International Championship of Collegiate A Cappella. The film is filled with excellent performances by Anna Kendrick along with Rebel Wilson and Skylar Astin among all others. This is a light-hearted musical that has received a positive response from the audience and has proven itself to be a success at the commercial box office rates.

Well, well, well, everyone knows that no set of musical films is complete without watching this one. It has been written as well as directed by Damien Chazelle. The film features a refreshing pair of Ryan Gosling as well as Emma Stone. They fall in love in Los Angeles while also pursuing their dreams. The film has proven to be a success when it comes to financing while it won a whopping amount of seven breaking records at the Golden Globes. It has also received the Best Picture as well as Best Actress at the Academy Awards.

The Greatest Showman― Released in 2017

This film is based on the tale of the creation of the American Museum of Barman by showman P.T. Barnum. This film is such a sweet treat to watch. Hugh Jackman does the part of this estranged performer, that is Barnum. Obviously, this statement can be considered as the major highlight and a catch for the film. Michael Gracey has directed this tale. All this while, the film even has a strong supporting cast that includes Zac Efron along with Michelle Williams with Rebecca Ferguson. The film, at the time of its release, was given the title of the fifth highest-grossing live-action musicals and it has even garnered a variety of awards.

This title can be considered as a musical crime film. It happened to be the first one to win an Academy Award for the Best Picture since the film, Oliver from 1968. The timeline of this tale is set in the 1920s. The entire film is based on an eponymous stage musical and employs actors such as Renee Zellweger as well as Catherine Zeta-Jones. They are the two murderesses who are waiting for their trial in Chicago. For this film, Zeta-Jones has even earned the Best Supporting Actress Award at the Academy Awards and BAFTA. If you are a fan of musicals, you just can not skip the glitz as well as the glitter employed in this film about Chicago.

Also Read: 10 Best Action Films To Watch If You Liked ‘The Old Guard’ – A Must Watch List