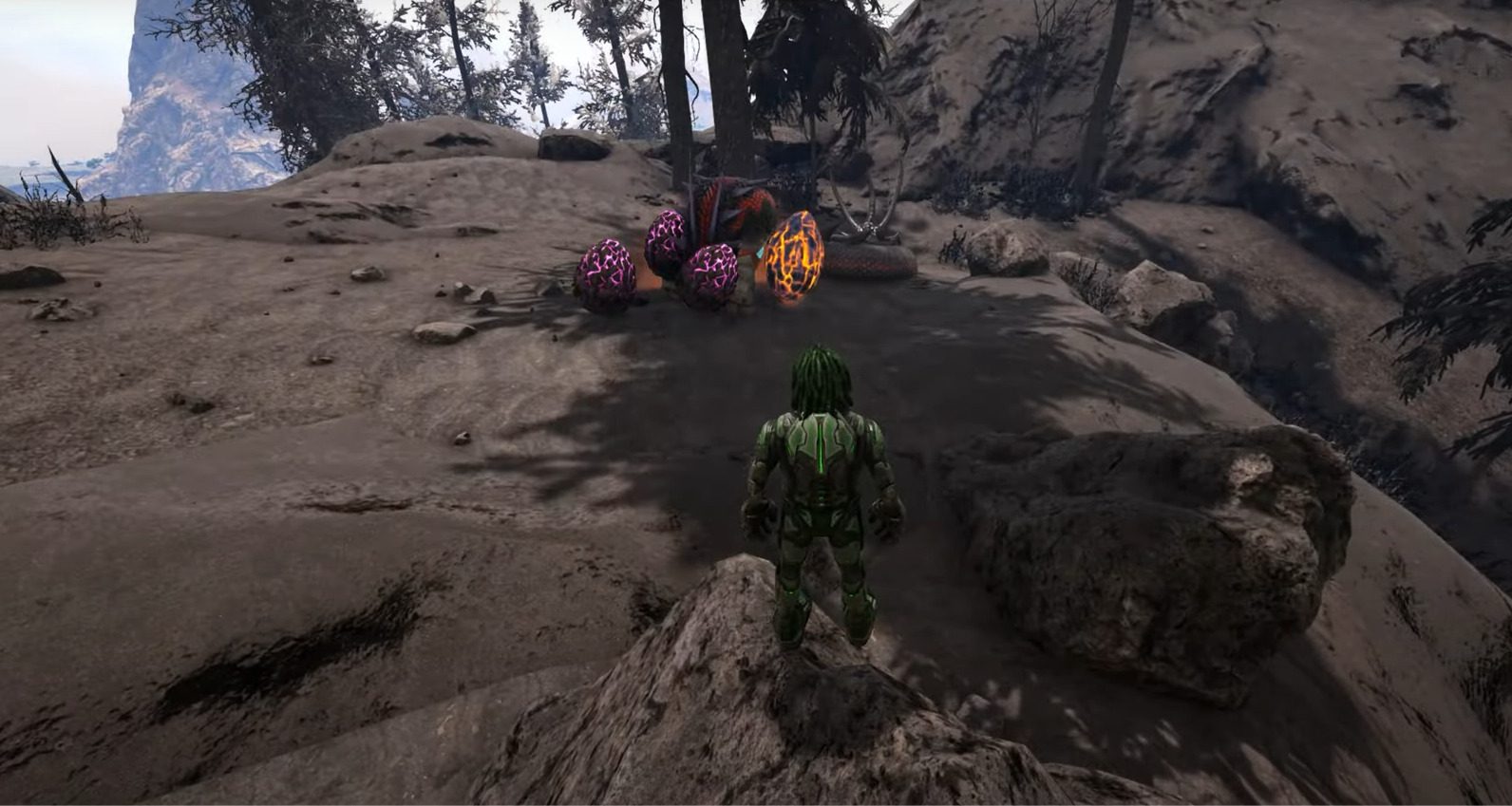 How To Tame A Basilisk

The Basilisk, which was added to ARK: Survival Evolved game with the Aberration DLC, has been around at least since “Harry Potter and the Chamber of Secrets.” Due to his exploits, he now holds the title of the biggest snake in the Ark, which you can tame and ride as well. He is the ideal long-range fighter due to his long-range attacks.

In Ark Aberration, the deadly basilisk is a snake-like reptile that is twice as big as a snake but has many of the same characteristics. This species is the best at combat because its bodies are built for it. They can travel in complete stealth by digging a hole beneath the ground and can release venom that can kill an opponent in seconds.

Once the basilisk has killed its enemies, the bodies of the victims return to the earth where they wait for another creature to be drawn to them and kill them. If you can tame him, you can use all of a basilisk’s fighting abilities in Ark Aberration, so we’ve put up a guide on where to find one and how to tame it.

The basilisk is a huge snake, similar to the titanoboa, but much bigger. It is different from this one from the outside, though. It has a three-pronged tail, spikes that resemble shovels on the back of its body, and a more dragon-like head. The basilisk’s body is covered in scales that resemble diamonds, and it also has a few spikes and two horns on the back of its skull. It has a snake-like tongue and a mouthful of sharp teeth, including two enormous fangs. 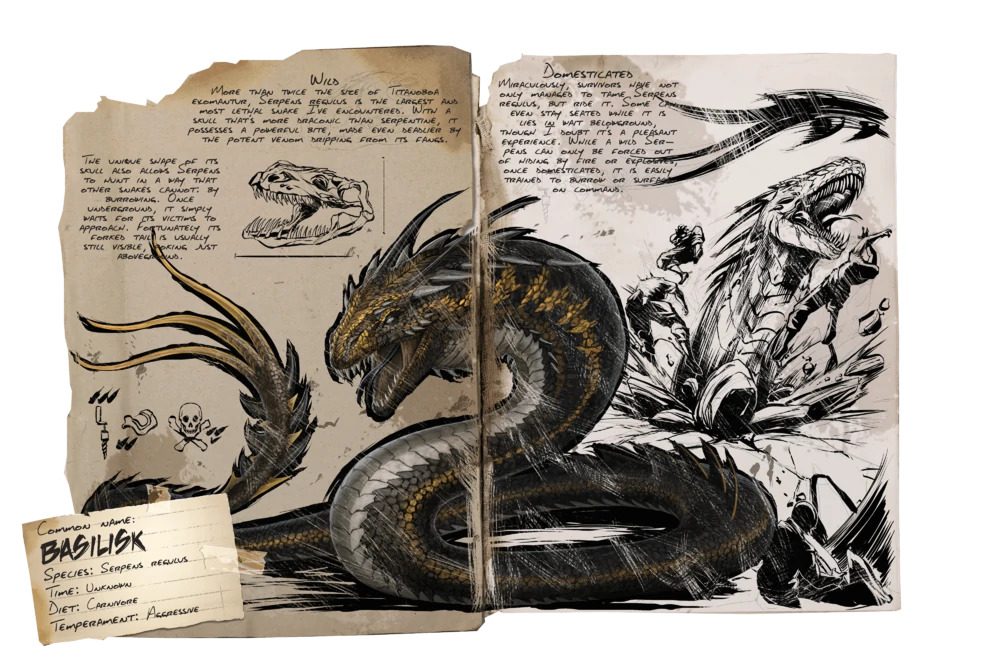 How To Tame A Basilisk – Basilisk In ARK

The basilisk burrow is the only thing you will see. The only thing you will see is the three-pointed tail that sticks from the ground and, if you’re lucky, you might even see it in time. If you’re not lucky, you’ve unwittingly become his prey and fallen into his trap. He bites you while attacking, then he spits a toxic ball at you. After killing his prey, in this case, you, he retreats and waits for the next foolish creature.

You cannot breed the basilisk even if it lays eggs, but you can ride it. It qualifies as a fighting mount because of its capacity to throw the poison ball a long way and enable long-range attacks. Because they inject poison into the victim when they bite, frontal attacks are also effective. The basilisk also has the unique ability to burrow when ordered, even with a rider on top. Simply be aware enough to avoid running out of oxygen.

Since it spawns in the deeper places located all over the map, finding the basilisk in the Aberration is not difficult. The Basilisk appears more frequently in the lower areas of the map, such as The Lost Roads, The Ancient Device, The Spine, and Element Falls. In the below map, the areas where the basilisk is more likely to spawn are all marked with yellow squares, while those areas where it is more difficult to spawn are marked with orange squares. 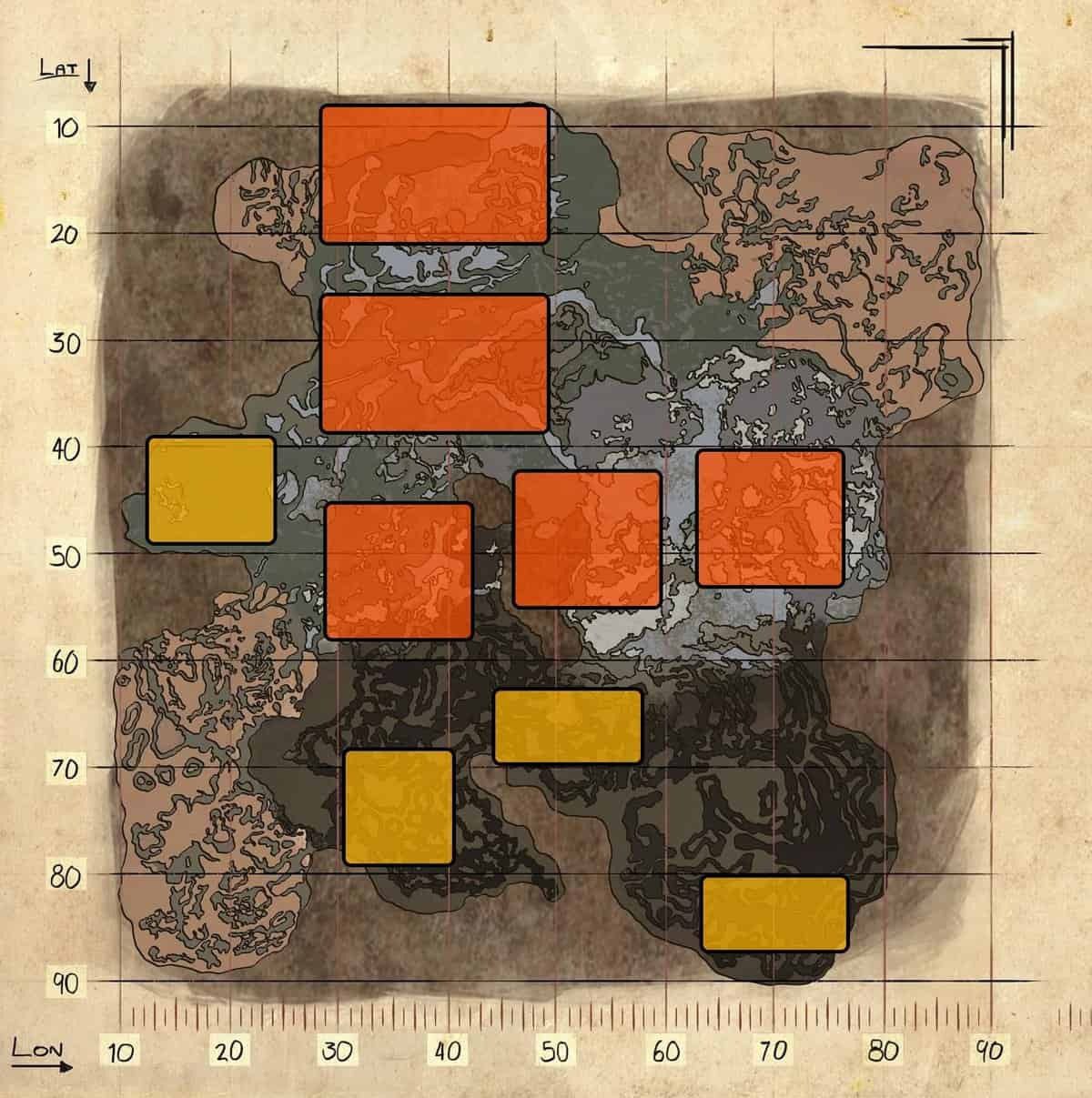 How To Tame A Basilisk – Basilisk Location

How To Fight Basilisk

This section explains how to fight the Basilisk. Through burrowing, basilisks will always remain hidden during their whole existence. When a forked tail sticks through the rubble, you can tell whether one is nearby. Being about one dozen yards away will make them angry, causing them to spring up. It is never advisable to fight a Basilisk on your own, so make sure you have sufficient mounting or weapons. Although most mounts can easily outpace basilisks, don’t ignore their speed. You can fly one over a cliff if it is blocking the road. After they have followed you over, they will move out of your way.

Basilisks can be killed just as easily as a Spinosaurus. Avoid close combat if you don’t have a gas mask because, like with a Poison Wyvern, a gas mask, hazard gear, or a tek helmet can neutralize the poison. If one must engage in a fight without this gear, then other strategic steps must be taken to prevent losing your mount. When attacking while dodging the poison spit, you can run and jump if the mount is little, quick, and swift. To stop a poison shot from hitting you, bigger mounts can have their bodies tilted in that direction. 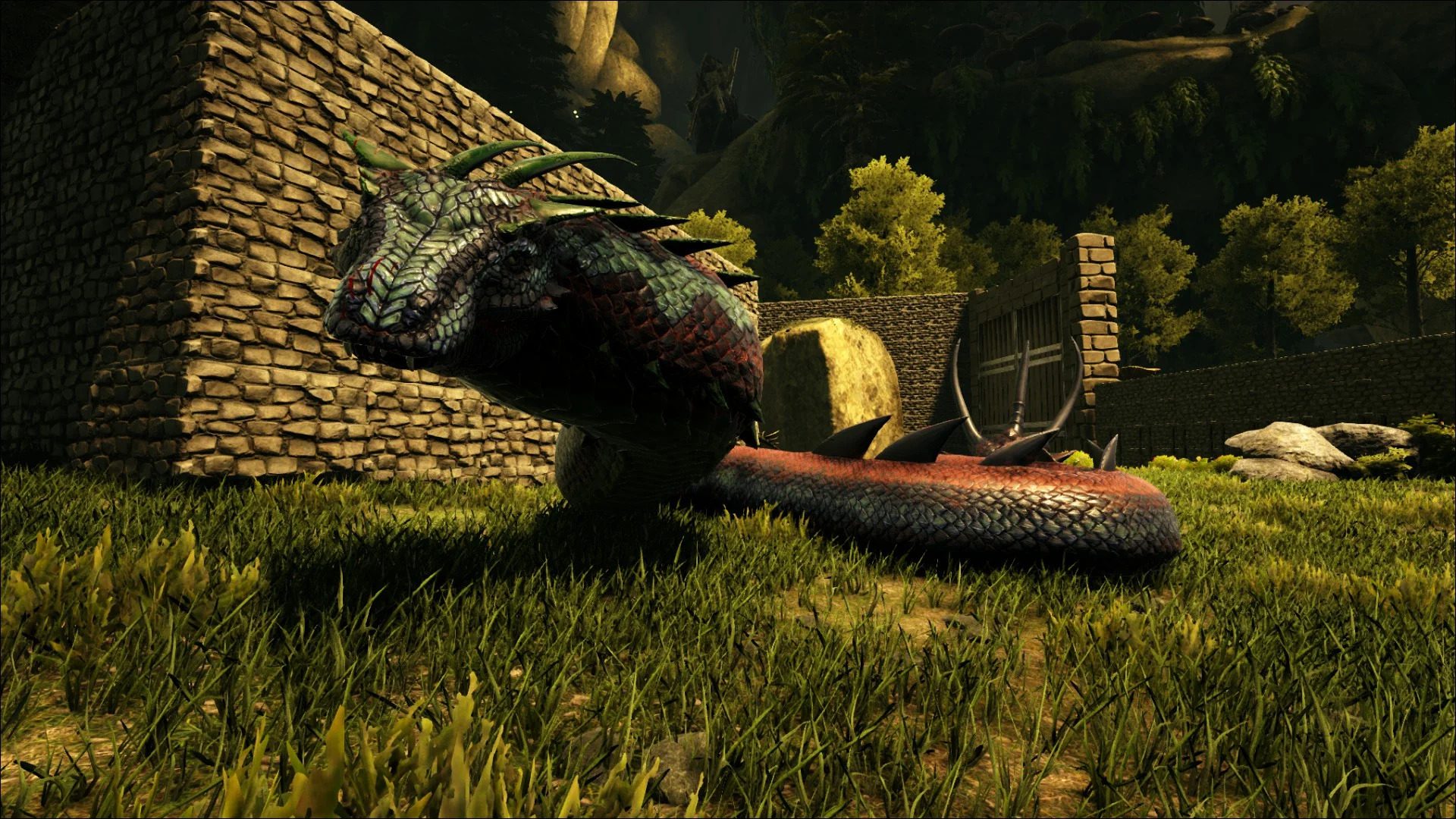 How To Tame A Basilisk – Basilisk Size

To fight basilisks, use ranged weaponry like compound bows or assault rifles. If you can shoot from a safe area, you can kill low-level Basilisks with a crossbow, however, it will take a lot of arrows. It is strongly advised against using Torpor-inducing weapons and ammunition because it cannot be knocked down. Avoid coming too near and using melee weapons because the basilisk’s melee attacks cause torpor and can knock you out before they can do any harm.

Apart from its forked tail, it can bury into the ground and hide, making it vulnerable to an unexpected ambush. Keep your guard up at all times, even if there was no reason to on Aberration, as they can be found practically everywhere on the map. The basilisk attacks with a poison that, when it hits, explodes and does a ton of damage. A gas mask can counter this, much as the poison wyvern. The bite of a basilisk is also poisonous, and if a survivor or tame is not careful, their torpor may rise and they may be knocked unconscious. Additionally, they have good health, melee attack, and movement speed in addition to being strong, swift, and powerful.

How To Tame A Basilisk?

Instead of using tranquilizers, non-violent means are used to tame the basilisk. On Aberration or Genesis: Part 1, the player will have to use fertilized Magmasaur or Rock Drake eggs to tame the creature. When the basilisk is not underground, throw them on the ground at or close to it. Even though it will still eat eggs while aggroed, the likelihood that it will eat them is quite low, therefore it is advisable to kite it close until it loses interest in the player. When the egg gets close to one of them, the basilisk will “attack” it and eat it, progressing in its taming. Each fertilized egg’s ancestry will not have an influence on the speed of taming. 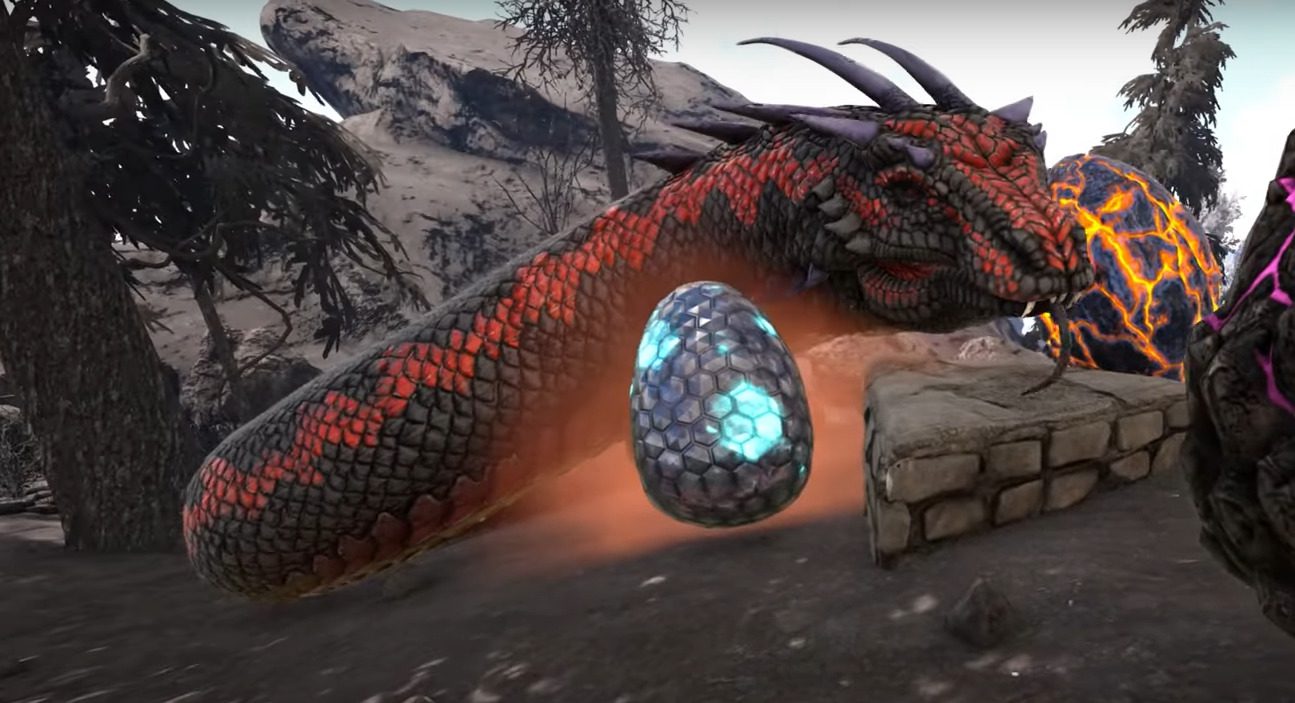 How To Tame A Basilisk – Place Eggs As A Bait

If extra eggs are needed, retreat to a safe area for a considerable amount of time because the Basilisk rarely becomes feedable again. One strategy is to use a rapid mount, like a Raptor with great movement speed, to attract it over to the fertilized egg as it moves quite quickly once annoyed because flying mounts are not available on the maps it exists in. If dropping while moving, make sure the egg is placed from your own supplies; if it is placed from the mount’s supplies, the basilisk will still consume the egg when it is not agitated, but taming will not proceed.

Utilizing mounts like Rock Drake, Rex, or Magmasaur—which the Basilisk is not bothered by—would be an alternative strategy. Once you get its attention, dismount close, mount, and kite it into a circle. Don’t hit it. Keep a constant eye on it, and when you notice that it is turning its head to the side from your tame, dismount to the opposite side and mount again to maintain aggro. You  could also use Karkinos. Hold a weak wild dinosaur, like a parasaurolophus, and annoy the basilisk. Continue rotating in a circle while dropping the eggs from your survivor’s supply to protect the unfortunate creature that is being held.

Remember that every time the basilisk digs, its ability to be tamed will decrease, and while maintaining aggro can work, creating a trap of some form is a simpler approach to stop this from happening. In order to use constructions, you may need to use Dinosaur Gates and/or Walls with Fence Foundations, leaving a corner gap just big enough for the player to get out but not the Basilisk. Moving around to draw its attention to your location and then losing it again are necessary for this strategy to be effective since it will try to attack the structure in an effort to get to the character. But watch out for its poisonous spit. 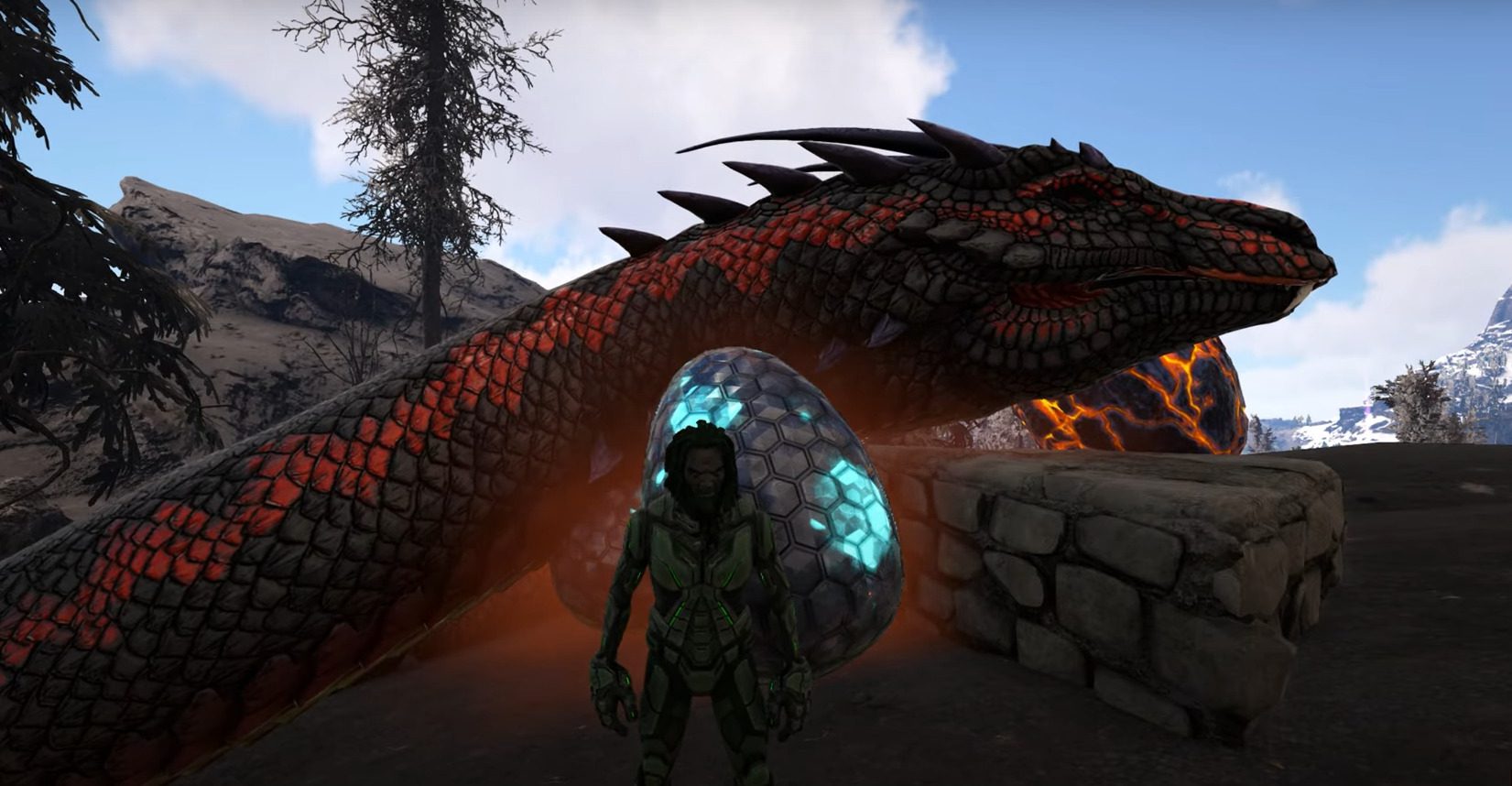 How To Tame A Basilisk – Basilisk Is Tamed

By far the simplest method for taming a basilisk is to build a cage out of pillars and foundations. Since the basilisk cannot penetrate foundations, your taming effectiveness will never decrease. Every time the basilisk burrows, its ability to be tamed decreases by roughly 7-8%. Be careful because it won’t eat if it is severely injured and won’t accept food until it is almost fully recovered. The Basilisk will eventually lose its ability to be tamed, even while it is not burrowed. Maintaining aggro on a creature or on you all the time is one way to stop this.

The remaining steps in the taming process are easy because all you have to do is keep feeding the Basilisk Rock Drake Eggs until it is finished. The best course of action is to return later so that you won’t have to worry well about basilisk escaping. Basilisk will occasionally refuse to eat eggs since he may not be hungry. The level 30 Basilisk takes around one hour and twenty-seven minutes to tame, and the feeding interval is roughly ten minutes. This means that during the taming process, you must give the Basilisk one Rock Drake Egg every ten minutes.