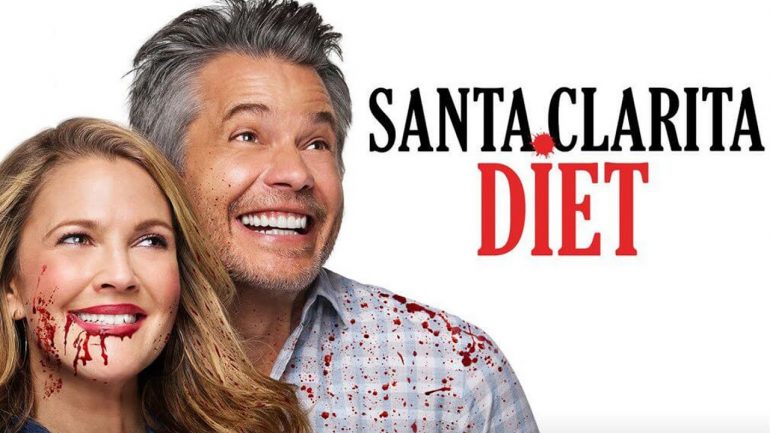 Santa Clarita Diet, which is Drew Barrymore’s passion project barely lasted on Netflix. While it was around for three successful runs, reports came in last year that the show was being canceled. Since then, confusing details have surfaced about the fate of the show. Just recently in July, news came in that season 4 of Santa Clarita Diet was really happening. And this was after we were told the show was going to be off air forever.

Santa Clarita Diet can be best described as a comedy-horror show. All its past seasons have been loved by the audiences. Initially, the viewers might have taken some time to get used to the show, but once that happened, the show was booming on Netflix. The third season of Santa Clarita Diet arrived on Netflix in March 2019.

There’s so much you must be updated with, so keep reading to know the actual details.

Like we mentioned gossips and everything included, fans have been really antsy to know whether Santa Clarita Diet is going to arrive again or not. For a show that hasn’t even confirmed Season 4, things are already hyped up for it. But we are here to confirm what you have read before.

Santa Clarita Diet has been canceled on Netflix. The streaming giant did not renew it for the fourth season in April 2019. There were a host of reasons behind its cancelation. The show got pretty expensive for Netflix to sustain. Drew was charging way too much for a show and it wasn’t even making enough money for the network.

Ever since this news has been confirmed, massive online campaigns were launched online for the fate of the show. Whilst the show won’t come back to Netflix at all, there’s still hope that some major network should pick it up and air it.

Again we would want to reiterate that nothing has happened on this front so far and Drew’s passion project continues to be axed. But in the world of entertainment, there’s renewed hope and optimism at play all the time. Let’s just hope some network jumps in to pick up the show.

And even if that were to happen, Santa Clarita Diet won’t be back on TV for a long time. You may expect it to return to TV in 2021, or maybe later. But even that remains unconfirmed as of today.

Santa Clarita Diet Season 3: Where Did It Leave Off?

Santa Clarita Diet is about an ordinary couple living in Santa Clarita along with their teenage daughter. Just when you think their lives are pretty damn ordinary, something out of the blue happens. The wife, Sheila undergoes a major transformation and is turned into a human-zombie who feasts on other humans. Behind her transformation is a purpose, she is sent to Earth only to cause death, mayhem, and destruction. But soon enough, Sheila starts to embrace her new self and takes things in a stride.

If the fourth season would come back at all,  Drew Barrymore would reprise her role as the protagonist Sheila Hammond. Timothy Olyphant would be back as her husband, Joel Hammond. But that is not going to happen, both Drew and Tim need to find other jobs for now,

That’s all about Santa Clarita Diet. We’ll be sure to keep you updated!