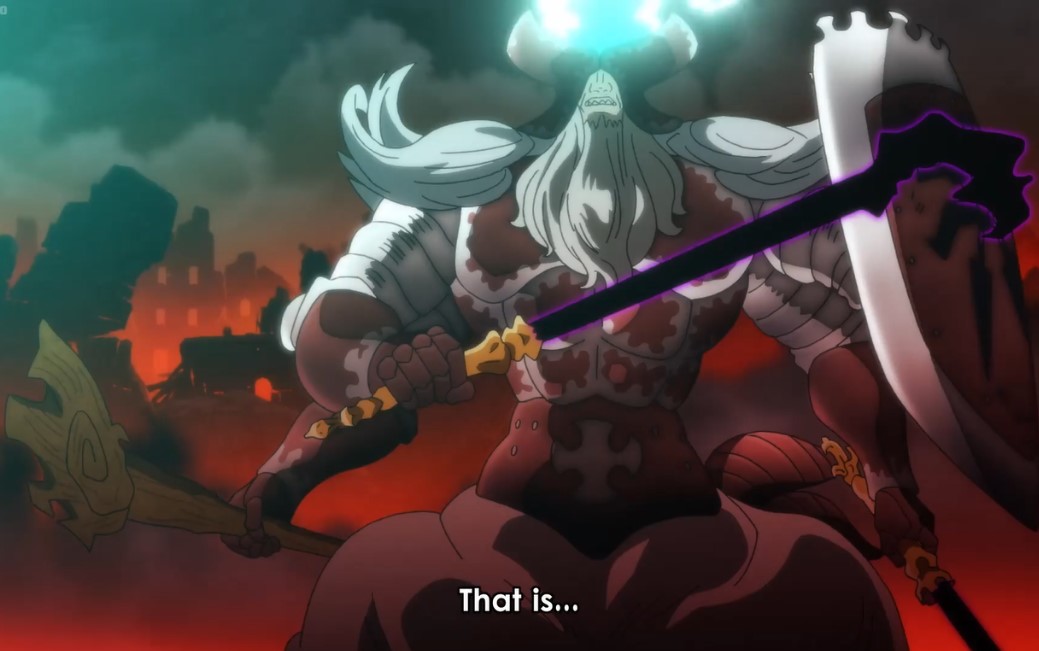 Ban, Meliodas, and Wild challenged the Demon King countless times to escape Purgatory. It took them more than sixty years battling with the Demon King, but they were losing every battle. Ban uses his new ability, and Wild sacrificed himself for the two to escape Purgatory. Ban was the first one to return to the Mortal Plane and revive Elaine. But he has lost his immortality, and Mael has joins the Sins to battle the Demon Race.

Cusack and Chander clashed their swords and transformed into the First Demon. The First Demon comments he is the sinner. Merlin reveals that the dark zone created by Meliodas and the Commandments have been shattered. She is wondering if the First Demon is Chandler and Cusack’s true form. Merlin told the Sins that their chance of victory is lost. Escanor decided to protect everyone and started to block the attacks.

The Seven Deadly Sins Season 5th Episode 10 will be available on its official platforms on Wednesday, 17 March 2021, at 5:55 JST on Netflix. Let’s see how the battle will continue in the following updates below.

Escanor exchange blew with the First Demon and said he would take him down with everything he has. He attacks with a Cruel Sun, but the First Demon blocks it using a shield. Marlin comments that they can stay alive until the other Sins arrives at the scene. Escanor thinks that he and Merlin are more than enough to take him down.

The First Demon told Escabor to stop playing around since his death is near. Nobody will make it in time to save them. Merlin attacks with an Etraminate Ray, but the First Demon blew a laser beam that smashes her with the building. Escanor tries to attack, and he got sent flying. The First Demon felt a tremendous energy approaching and wonders who it is. Merlin wakes up, and she is surprised to see the blows.

She realizes that it is King’s Spirit Spear Chaestefol. Escanor is wondering where King is since she can’t see him. Merlin reveals that the true powers of Spirit have awakened. King is attacking from a distance, and he has gained powers to do so. Zeldris felt the presence of the Seven Deadly Sins from a distance. Zeldris comments that he is sensing several powerful sources of magic energy from the north.  At a distance, the Seven Deadly Sins are making their moves towards the battle. King is glad that he is controlling the Chastiefol from a distance. But it reduces too much magic. First, Demon has managed to cut the Spirit Spear with his blade.

The Fourth Form, Sunflower, and True Spirit Chastiefol emerge and attack with a powerful blow. Zeldris interferes and cuts the attacks using his sword. At a distance, King is surprised that his magic has been canceled. Zeldris told the First Demon to take care of Escanor and Merlin. He will handle King, who is attacking from a distance. The First Demon started to do the orders from Zeldris and fires multiple lasers towards the enemies. Gilthunder refuses to leave Magret ate the state she is in. Magret shed tears that Mael is still alive and he is not taken away by those impure demons. She asks Hendrickson to take her to Mael. Hendrickson uses a Purge to separate Ludoshiel and Magret. They both fall to the ground. Gilthunder is surprised to see Lodoshiel of the Four Archangels. Hendrickson explains how he uses Purge to separate Ludoshiel and Magret.

Birth of a New Demon King

Gilthunder realizes that Hendrikson was faithful to Lushioel so that he will wait for him to get weaker. In a state of his weakness, he gets a chance to separate the two. He told Gilthunder to get away with Princess Margret, and he will stay behind sins; he has many sins. Hendrickson reveals that he didn’t only take Magret away he has also killed Gilthunder’s father. He did that to make Gilthunder suffer, but he is ready to pay for his sins.

Gilthunder left, and Ludosgiel wakes up, and Hendrickson asks him to make him his vessel. Zeldris continues to battle with the Spirit Spear. He reveals that he has a backup plan. The Sins realize that if all Commandments gather, Meliodas will become the Demon King. The evil powers started emerging from the sky. First, Demon comments that it is the birth of a new Demon King.  King comments that they are too late. Merlin unleashes the spell of Chrono Coffin; she wants to stop the birth of the new Demon King. Zeldris and First Demon rush towards her to stop her from completing the spell. Escanor and King stop the two from attacking. Merlin told them to buy her some more time. Lodoshiel thinks Meliodas will awake as the new Demon King. Escanor got defeated by First Demon, and Ludishiel decided to help. He told Merlin to hurry up with her spell.

‘Dear…’ Gets Renewed For A Second Season on Apple TV+