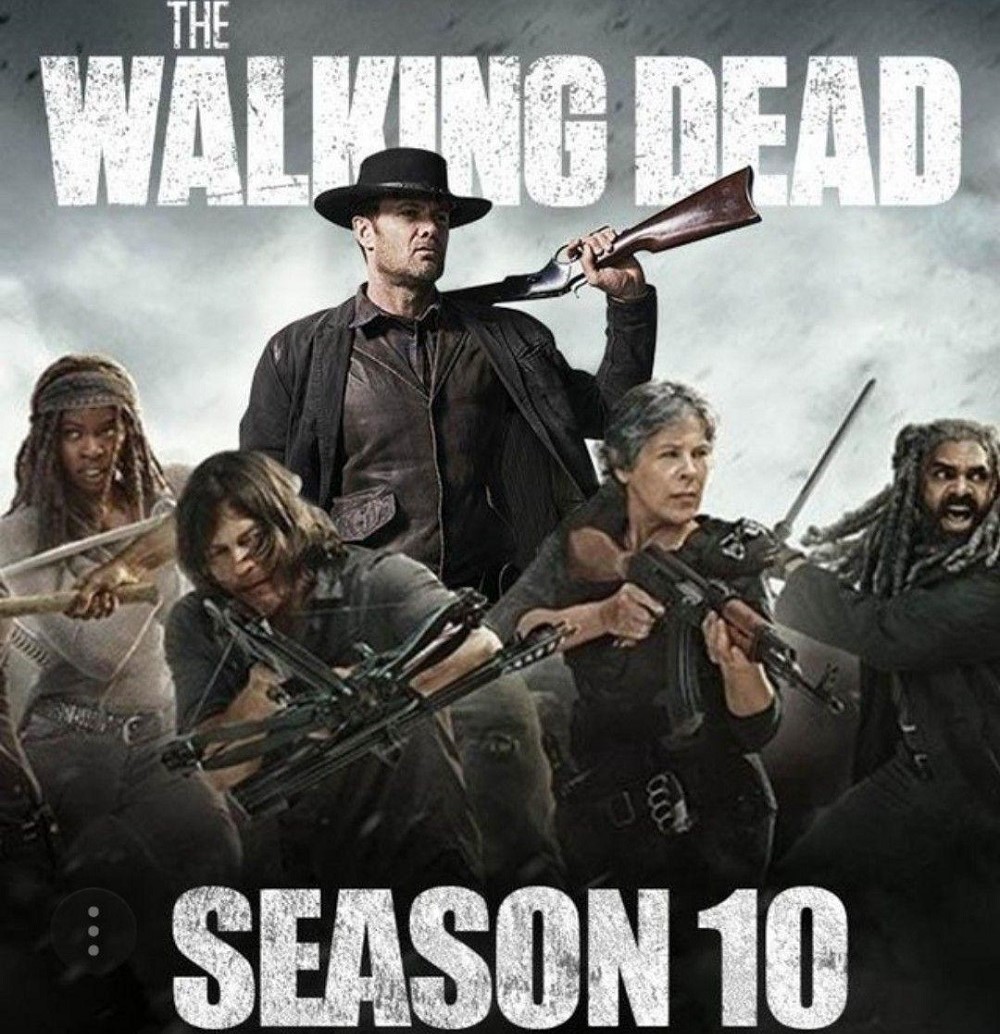 "The Walking Dead" Season 10 Episode schedule for the remaining episodes is out and here's all you need to know.

“The Walking Dead”, the American post-apocalyptic horror TV series is back with its tenth season and is soon going to release its next episode. Developed by Frank Darabont, the series revolves around a comic book series with the same name. Charlie Adlard, Robert Kirkman, and Tony Moore were the creators of this comic book series. The series debuted on 31st October 2010. However, it has been a decade since its premiere now. The series has released 9 seasons till now with the tenth season currently running. It has received great reviews as the fans have loved it. They had been eagerly waiting for this season and once, it was released they were constantly waiting for the new episode every week. Even though the show had to be stopped in between due to the COVID-19 pandemic, once it resumed, the viewers were really happy.

Everything you need to know about The Walking Dead Season 10:

“The Walking Dead” is an American horror and post-apocalyptic TV series based on a comic book series with the same name. Frank Darabont has developed the show with Heather Bellson, Jolly Dale, Paul Gadd, and Caleb Womble as the producers. Around 5 production companies had joined forces to produce the show with AMC Networks and Entertainment One acting as the distributors. The 10th season began on 6th October 2019 and finished its original 16-episode season in March 2020. However, AMC had given an order for additional six episodes. So, the showmakers resumed production in October 2020 for the remaining season.

The story of the show revolves around a group of survivors from a zombie apocalypse. They continue to survive and stay alive under consecutive attacks or threats from the zombies, better known as ‘walkers’ in the series. However, as the story progresses, the survivors start having conflict among themselves. The humans form their own communities and lay down their own sets of morals and laws. This leads to squabbles between them and causes trouble for everyone. Anyhow, let us have a look at the cast of the series for the 10 season.

Ryan Hurst as Beta: Ryan Hurst is an American actor popular for his character of Tom Clarke in “Taken”. Some of his other works include “Bosch”, “Outsiders”, and “Sons of Anarchy”.

Eleanor Matsuura as Yumiko: Eleanor Matsuura is a Japanese-born British actress. She has been a part of many famous movies and series like “Juliet, Naked”, “Wonder Woman”, and “Breaking and Entering”.

Cooper Andrews as Jerry: Cooper Andrews is an American actor popular for his role in “Halt and Catch Fire”. Some of his other works include “Shazam!”, “Den of Thieves”, and “Golgotha”.

Nadia Hilker as Magna: Nadia Hilker is a German actress and model. Some of her best works include “Collide”, “The 100”, and “Spring”.

Cailey Fleming as Judith Grimes: Cailey Fleming is an American actress. She is popular for doing movies and shows like “Hover”, “Peppermint”, and “Better Things”.

Cassady McClincy as Lydia: Cassady McClincy is an American actress who has been a part of some really popular series and movies like “Poor Jane”, “Love, Simon”, and “Castle Rock”.

Lauren Ridloff as Connie: Lauren Ridloff is an American actress who is deaf but a really talented artist. Some of her famous works include “Sound of Metal”, “Wonderstruck”, and “Eternals”.

A few months after the winter storm, the communities were thriving without any signs of the Whisperers. However, Michonne states that they must respect Alpha’s border if they don’t want to create any further conflict. Later on, at the Oceanside, a Whisperer mask washes ashore and they find a skin in the woods nearby. Consequently, the groups get on high alert. They observe an old Soviet Union satellite crash to the earth within the Whisperers’ boundary.

A Whisperer had some resentment towards Alpha as she forced her to abandon her child. Consequently, she attacks Alpha in the middle of a walker herd. However, her sister, Gamma goes on to kills her and this helps her earn Alpha’s respect. Beta discovers a shrine that Alpha dedicated to Lydia. Here, Alpha revealed that she had lied to the Whisperers about killing Lydia. This angers Alpha and she destroys the shrine to prove that Lydia is no more alive for her.

The group in Alexandria defended their community against the consecutive quivers of walkers. This leads the survivors to suspect that Alpha is the one who is sending the walkers. On the other hand, Negan earns Aaron’s trust after he saves him from the walkers. Gamma arrives in Alexandria and tells the group to meet Alpha at the border. Here, Alpha calls for more land as punishment for stepping into her territory.

At the Hilltop, a tree collapses, and the wall is knocked down by it. They believed that the Whisperers had knocked over the tree. Apart from this, a group of Alexandrians attacks Lydia but Negan saves her. However, in the process of saving her, he accidentally kills one of the attackers. The council is divided over what they should do with Negan. However, Negan goes missing and this puts the community on high alert.

Kelly gets confused due to her hearing loss and gets lost in the woods. However, Daryl, Connie, and Magna manage to find her later on. On the other hand, Aaron encountered Gamma and offered her bandages as she cut her hand. The latter then flees and informs Alpha of his interaction. Later on, Brandon finds Negan and goes on to join her. In fact, in order to impress Negan, Brandon murdered a mother and her son. Consequently, Negan also kills Brandon for his deeds.

Carol and Daryl set out on a mission with the motive of destroying Alpha’s walker horde. After Carol captures a Whisperer, Daryl starts doubting Carol’s motives. At Alexandria, several other survivors along with Rosita become ill after Gamma manages to contaminate Alexandria’s water supply with walker blood. Apart from all this, Eugene talked to a stranger from an unknown community over the radio. However, he stated that he will not inform anyone of his communication.

Carol starts interrogating the Whisperer they captured. During this, the Whisperer praised Alpha for her claims of having killed Lydia. However, Dante poisons him to death later. Carol, on the other hand, is plotting on how to turn the Whisperers against Alpha.  The sole reason behind this is that she lied about Lydia’s death.

Dante’s true identity as a Whisperer is exposed after everyone finds out that he attacked Rosita. Consequently, people hold him responsible for many recent incidents within the community. So, they imprison Dante for his actions but Gabriel murders him in his cell. Apart from all this, Oceanside encounters a man named Virgil. He was the one whom they suspected to be a Whisperer. Consequently, Virgil makes a proposal to lead Michonne to a naval base that consists of some valuable weapons.

The group navigates through the cave and fends off walkers while the Whisperers they search for an exit. On the other hand, Kelly finds a crate full of faulty dynamite that Carol carelessly detonates in hopes of destroying the horde. Carol, Daryl, Jerry, Aaron, and Kelly escape in the end but Magna and Connie get trapped inside the cave after the exit collapses from the dynamite blast.

Gamma arrives at Alexandria to tell the group about everything that happened in the cave. Despite her telling the truth, Rosita and Gabriel are doubtful whether she is being honest. So, they lock her up in the prison. While searching for another entrance to the cave, Daryl sees Alpha and attacks her. The two fight and they end up critically wounded.

Over the radio, the stranger finally reveals her name i.e. Stephanie. She also discloses her location to Eugene and they plan to meet in a week. The Whisperers and Alpha, on the other hand, plot to attack Hilltop with the horde. They force the community to start plotting for a battle.

As Hilltop burns to the ground, all the survivors divide into small groups and start searching for safety. On the other hand, Judith becomes shocked after accidentally killing a Whisperer while fighting the walkers. Apart from all this, Magna finally escapes from the cave by blending in with the horde. However, the fate of Connie remains a mystery.

Michonne comes to the naval base with Virgil. However, she finds no weapons there and consequently, realizes that it was all a trap. So, Virgil locks her up and she discovers that there are many other captives on the island. Then, Virgil drugs her and due to this, she starts experiencing hallucinogenic visions of Siddiq and Andrea.

Flashbacks show that Carol manages to free Negan from his cell after he agrees to assassinate Alpha. On the other hand, in the present-day, Carol hallucinates Alpha who taunted her about her ethics as well as her past. Negan continues to struggle to convince Daryl that he has killed Alpha. Besides all this, a group of Whisperers trap the duo and nominate Negan as the new Alpha. However, Negan kills them in an attempt to prove his faithfulness to Daryl.

Princess accidentally frightens away Eugene, Ezekiel, and Yumiko’s horses after introducing herself to them. Consequently, she offers to lead them to transportation. However, she takes them through a roundabout path as she wants to win over them because she had been alone for many years. On the other hand, Beta starts hearing voices in his head and leads the horde of walkers he has gathered to Alexandria to find it empty.

With the hospital surrounded, Daryl along with the other survivors sneaks past the horde. Then, he leads it away using loud music and a wagon. However, on the way, Beatrice is killed. Several Whisperers enter the hospital where Gabriel waits back thereby allowing the others to escape first. Apart from all this, a masked survivor and Maggie rescue Gabriel. They had received Carol’s letters and consequently, they managed to also save Alden and Aaron.

Maggie finds out that Negan was released. Carol goes on to explain that she had released him and that he killed Alpha. Then, Maggie learns that the Whisperers had attacked the Hilltop and burned and destroyed it completely. Daryl, Maggie, and the others seek shelter for a night and later return to Maggie’s group. They returned safely only to discover two of their members dead and Maggie’s son Hershel missing.

Anyhow, brace yourselves as the next episode of Season 10 i.e. the 18th episode will be released on 7th March 2021 at 9 PM ET. The title of the episode is ‘Find Me’. You can tune in to AMC or Entertainment One to watch the episode at the same time. In case, you are unable to watch the episode, you can stream it on the official website of Entertainment One or AMC. Rotten Tomatoes has already released a trailer for the episode on their official YouTube channel. You can watch it above. So, get set for another exciting episode of “The Walking Dead”. Until then, let us know in the comments section how excited you are for the upcoming episode. Also, tell us what do you think will happen in this and whether they will be able to find Hershel.

10 Fantasy Movies To Watch If You Loved Soul