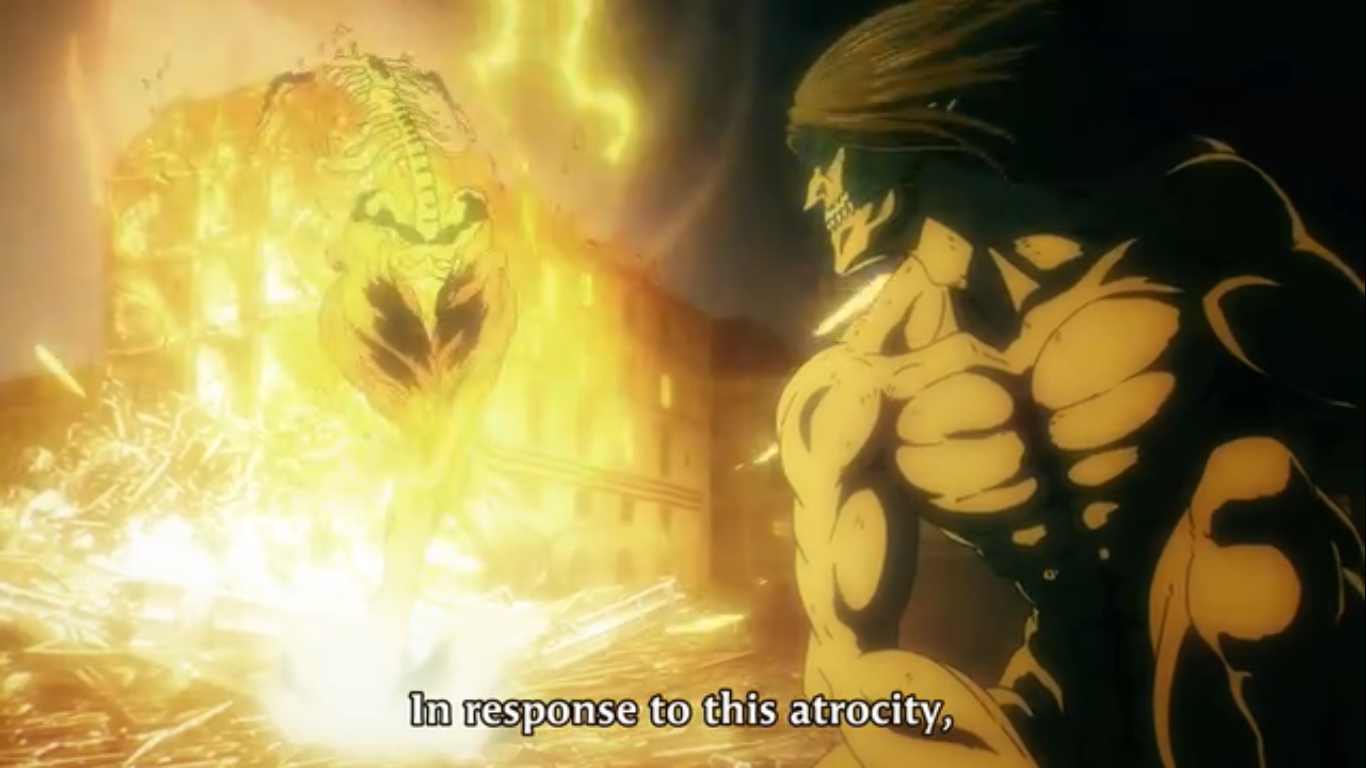 Attack on Titan Season 4 Episode 5 marks the end of the anime break that I saw last week without any releases. Attack on Titan The Final Season has finally picked up the pace and started the long-awaited war. In the anime’s anime’s anime’s anime’s recent episodes, we saw the life outside the walls and how things are like over there. Little did we know that Eren and his allies were also planning things on their side. It was only in the latest episode that we got to figure everything out. Eren finally cornered Reiner and was talking to him.

Willy Tybur visited Marley and planned to make the declaration of war to Paradis Island official. Eren had been keeping tabs on the situation and was updating his allies on how things are going. And based on the way things developed in the last episode. Paradis Island decided to attack right after the Tybur family declared war on them. They appear to have sneaked in, and Eren would signal the beginning of the attack when he raids the event and attacked Willy.

If they are spot on and the Willy is the War hammer titan holder, it will probably mean losing the fight before it even began. That’s unlikely to happen, though, since the story wouldn’t be as interesting afterward. The war hammer’s titan wielder is likely to be someone we can not think of right away. And based on the recent unfolding of events, it is just a matter of time before they show up.

In the recent episode of Attack on Titan The Final Season, we saw Eren trapping Reiner underground. Reiner was shocked to see all of this, and in the last episode, Eren waited for the right moment to attack while he talks to Reiner about all that was happening. Reiner seeing Eren here means that everything is set in motion, and this is the last step. They talked about how good everyone inside both Marley and Paradis is.

The two places are filled with good and bad people. But it’s mostly the innocent civilians that suffer, and the people of Marley are brainwashed. They now believe that the people in Paradis island are pure evil. And Willy used this to persuade them to join forces in the upcoming fight. This moment was used to explain everything else from the founding Titan days.

It is here that the secret behind the walls was also explained. It appears that the walls surrounding Paradis Island have titans inside them. And the King of Paradis threatened to unleash a full force of the colossal titans inside the walls. We also saw movements from Eren’s allies. They were separating Marley’s soldiers and those who wield the titan powers, which is happening right before Eren is about to attack.

The cart titan’s wielder and that of the jaw titan was also trapped inside a deep pit. This means that they will have a hard time transforming into titans in such a confined space. This will only slow them down and give Eren and his allies a head start in all this. And just when Willy officially made the declaration of war, he was met with cheers from the crowd.

Eren Attack at the Declaration of War Announcement 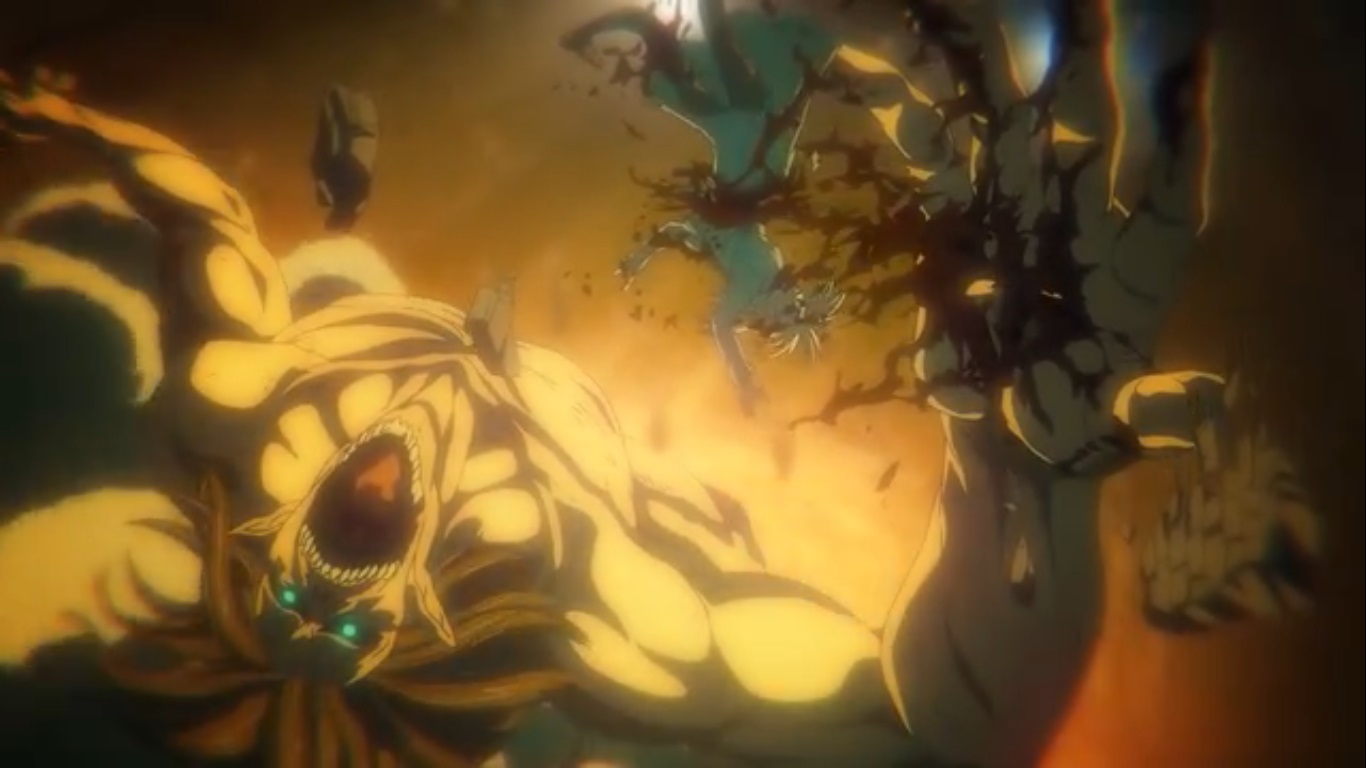 Eren then transformed into his titan form and attacked the stage where the declaration of war was made. He went straight for Willy; he must be thinking that he is the Warhammer titan’s wielder and wanted to take his powers. So far, we haven’t seen how things are going with Reiner. Maybe he will try to move and stop Eren. He also seems to be devastated after the talk he had with Eren.

He accepts that he is responsible for killing Eren’s mother since he is the one who destroyed the walls. But we are yet to see him make a move in this fight that has just started. It will be interesting to see the kingdom of Marley responding to all this. But now, the Paradis soldiers are likely to go full force to take advantage of their sneak attack. All the conditions have been met, and they managed to deal a good blow.

Now all that they need is the right follow-up. Soon, the survey corps will be making a move, and then this will be the beginning of an intense battle. And in the next episode, we will see how Marley will deal with this surprise attack. But now, their main forces are separated and disorientated. The only person closest to Eren, who is leading the attack is Reiner, and we know he can hold his own against Eren.

The next episode will be air on Sunday evening and available for streaming on Crunchyroll, Funimation, and Netflix. The episodes are available in both subbed and dubbed episodes for all of the previous seasons. The dubbed episodes for Attack on Titan, The Final Season, will be released later. Don’t forget to check our Anime News Weekly Updates for more news.

Recap and Preview: Log Horizon: Destruction of the Round Table Season 3 Episode 2