OtakuKart
Home Gaming Xbox Game Pass With Gold For March Will Have Batman: The Enemy...

The month of March is only a few days away and Microsoft has already announced the next lineup of games that will be available on Xbox Game Pass With Gold. In March there are also some amazing games for you to play on it. Many people are extremely happy with this as Microsoft brings very good game each month to their fans. There are two titles for Xbox One and two titles for Xbox 360. The new titles that will be coming to the service were revealed on Twitter.

First is one of the games that are developed by Telltale’s Batman The Enemy Within that is from Xbox One and second one Castlevania: Lords of Shadow 2 for Xbox 360. Batman The Enemy Within will be available from 1 March to 31 March. As for Castlevania: Lords of Shadow 2 will be available from 1 to 15 March 2020. But it doesn’t end there as there are two more games.

Those games will be available from 16 of March. The first one is Shantae: Half-Genie Hero, which will be available until April 15. The second one is Sonic Generations which can be downloaded until March 31. Furthermore, both of March’s free Xbox 360 titles are backward compatible with Xbox One. For now, you can play, TT Isle of Man and the original Star Wars Battlefront for now, because both will be returning to their regular price on 29 February and Call of Cthulu, will be free until 15 March.

Xbox Games with Gold for March 2020 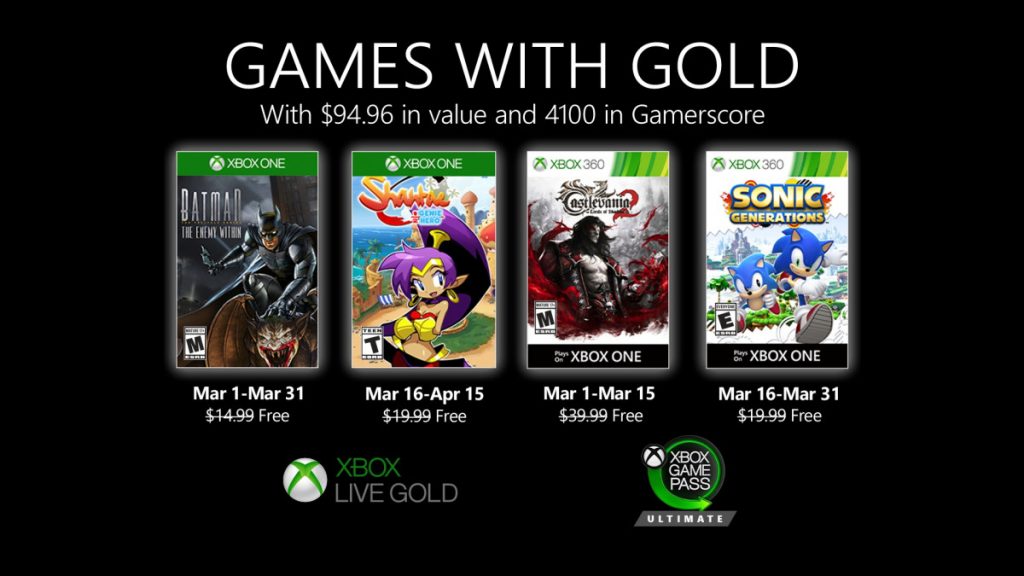 In this, we see both Batman, as well as Bruce Wayne into risky posting and on top of that Riddler, is terrorize Gotham once again. But it doesn’t stop there as a ruthless federal agent and the return of Joke. Batman must control the alliances while Bruce Wayne embarks on a series of deceptions.

This is a 2.5D platformer that has great exploration elements. In this players will have to defeat Baron who is behind each criminal caper in Sequin Land, and players will also fight to fight against Shantae’s arch-nemesis named Risky Boots.

This game starts after the awakening of Dracula who woke from a centuries-long slumber. He then wants to sever his immortal bonds, in order to do so, he must get his powers back to defeat Satan himself so that he can finally rest in peace.

The universe of Sonic is in chaos when a mysterious power comes into force that created ‘time holes.’ This takes Sonic and his friends back in time because of which Sonic meets some familiar faces even the classic version of himself. Now, it up to them to defeat the enemies and save their friends.