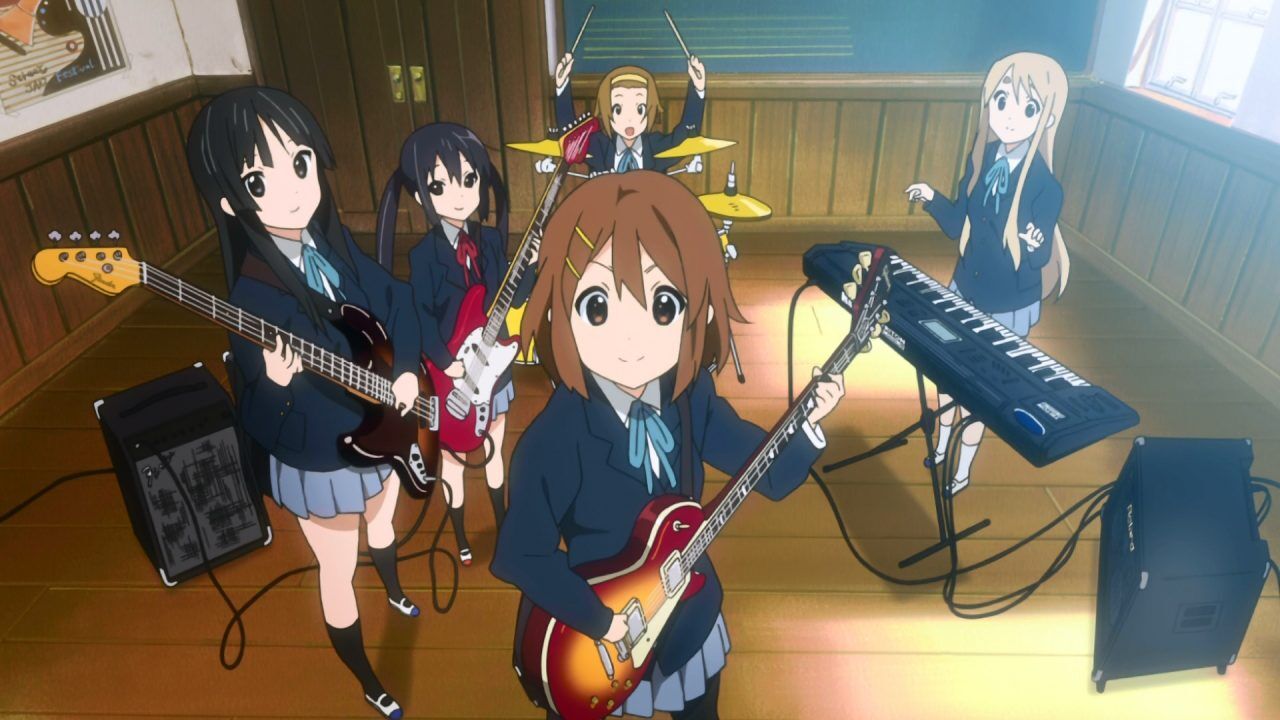 Well, as the people who love watching the anime K-On! are aware that it perfectly blends all the factors by which the audience can feel good. The show has been produced by Kyo Ani and throws light on the story of three students studying in high school. The first one is Ritsu and then Mio, along with Tsumugi. They all are set to reinstall the glory of the Music Club in their school. You guys should know that they are willing to do anything that might help them achieve their goals. This includes the fact that they even hired a rookie to play guitar. As weird as this concept may sound to any person reading it, once Hirasawa Yui is taken in the team, she really does a great job out of it.

We witness how these four girls work day and night trying to get over some battling problems at their school to get their club started. Also, not to forget, each of these girls has a special ability that contributes to making them different. All this while, when they come together and work as a team, no one can help but absolutely root for them. K-On! is surely that musical comedy show that instantly lightens your mood. Well, if you have already watched the whole show and are trying to look for similar ones, then there is a piece of good news. There is plenty of such slice of life anime with a musical genre wrapped up in this list. 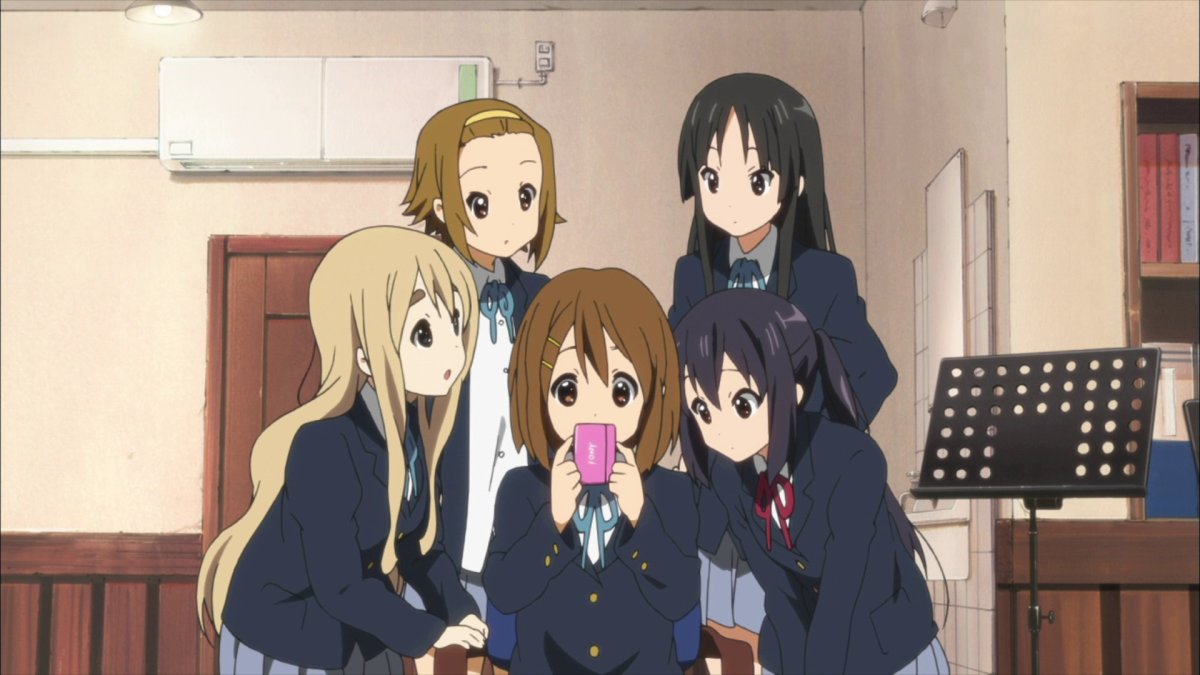 This anime show, A Channel, throws the entire spotlight on Tooru and Run, who have been mates since the show started. Despite the fact that the plot of this series is not famous for employing anything unique but that overused setting of a girl gang, but then again, the slice of life anime, as well as Seinen and comedic elements, does warm your heart just like we have seen in K-On!. Run has features of being ditzy and is pretty overprotective of her best friend, that is, Tooru. Later in the scenes, we witness that two other girls join their small group. They are Yuki as well as Nagi, who have also centered themselves around Tooru. A Channel has been put on this list because it is pretty similar to what K-On! is. The show can be watched pretty easily.

Sound of the Sky

You should not deflect from watching this anime show, that is, Sound of the Sky, just because it has the military visuals because it is more than that. Besides the fact that there are scientific as well as the military genre, the show also has employed elements of music as well as a slice of life. The tale narrates the story of a soldier residing in the Helvetia army camp called Kanata Sorami. He wants to learn the art of the bugle. We see how he gets mentored for this process by Sergeant Major Rio Kazuya.

All this while, we also have other soldiers who are unfettered by the ill effects that the war has. Their names are Noel, as well as Kureha. All three of them are lead by their personal musical mentors called Major Tio, along with Captain Felicia. Before people around them even know it, some of the heavenly sounds start coming out of the base camp too. You guys should know that Sound of the Sky should get all the appreciation because it has portrayed the human side that the army officials have. Also, the sound, as well as the style of art, is something that will take you back to K-On!. 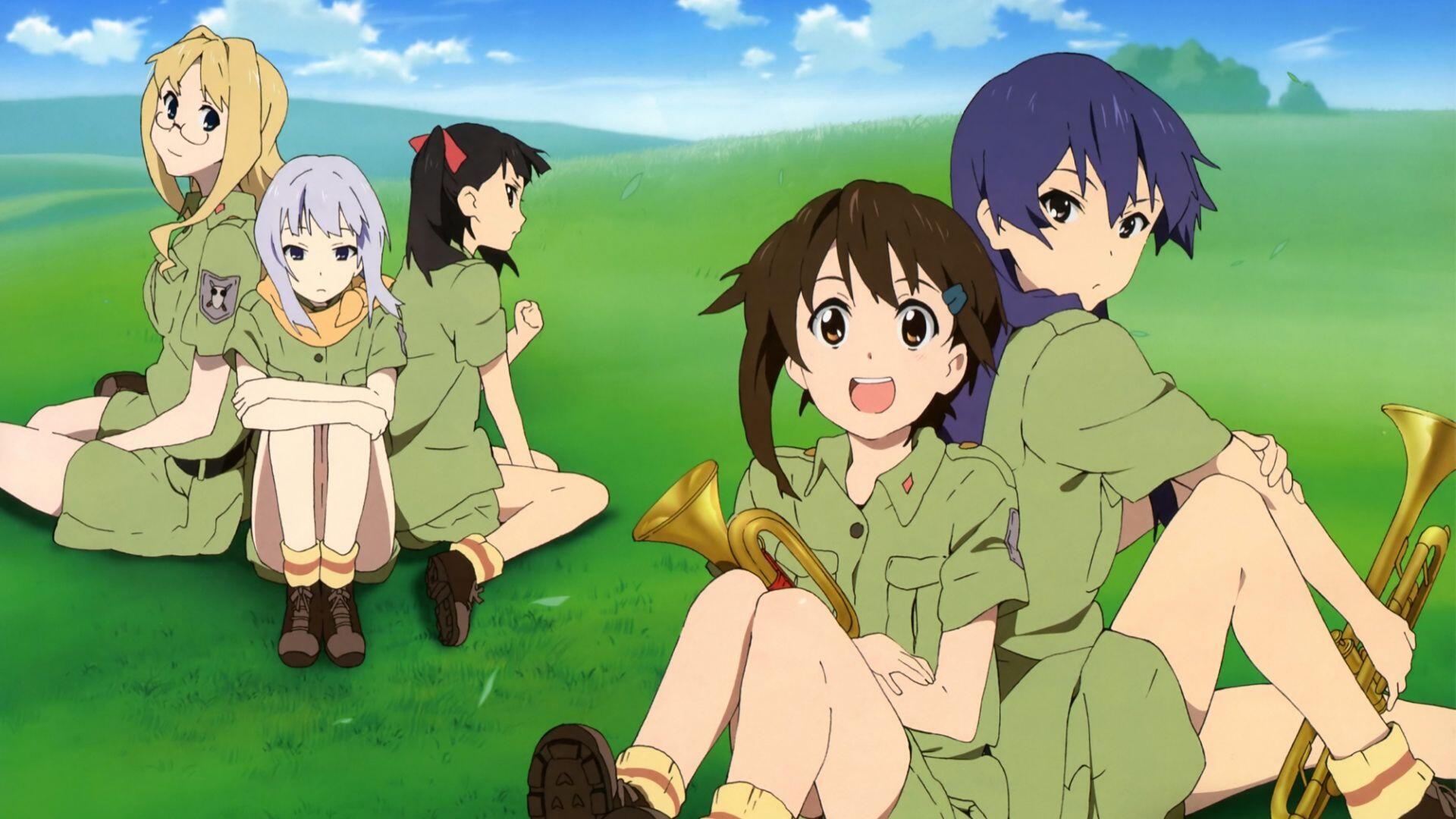 Sound of the Sky

This anime is surely a thoroughly eccentric comedy show and throws light on many kids who are currently studying in school. The show also has employed the prevalent club revival theme. It starts off with Akari Akaza, and when he meets the middle school girls called Yui and Kyouko, who have all signed up for an amusement club. From this point in time, the show is all about a couple of high school girls who all fawn over tea while also having loads of fun. All this while, you guy should keep in mind that you do not look for more than what the plot claims to provide. The show can be watched by the audience because it has some heartwarming moments along with comedy as well as amusement.

Well, this title is another musical as well as a slice of life comedy anime show. It is pretty similar to K-On!. As you should all know, it narrates the story of Konatsu Miyamoto. He is a student studying in high school who wants nothing but to sing next to her high school club. But this fact certainly can not take place as she is stopped by her vice principal because of a mishap that has happened in the previous year.

Just because she wants to do what she wants to do, Konatsu takes a full 180-degree turn and forms her own singing club in order to rebel against the school authorities. The whole show is set on a pretty difficult path. We see how Konatsu is joined by Wakana Sakai in her endeavor. Tari Tari is surely that standard sort of coming of age anime show and is a pretty easy watch if you consider my advice.

This anime show throws the entire spotlight on a student studying in high school called Kumiko Oumar. She has given up on her passion for Euphonium just because she has been through a mishappening while still in middle school. Later in the scenes, she finds herself around people who also have a passion for brass band. Together, they form a group and start off with the Kitauji High School band. The band has a tubist named Hazuki. Then they have a contrabassist named Kawashima and euphonist Asuka. They also have employed a trombonist named Tsukamoto as well as trumpeter Kousaka. The band is all required to win over the national Kansai Band Competition to prove themselves to everybody. The elements which connect Hibike to K-On! is surely its music as well as drama along with the high school setting.

The Melancholy of Haruhi Suzumiya

This anime series, The Melancholy of Haruhi Suzumiya, has employed a bit different school club, which is actually supernatural. You guys should know that the show excels in a slice of life as well as the science and fiction genre. The show initially was aired in a pretty nonlinear type of style. But once the audience understands how they can watch it in chronological order, it makes up for a pretty decent watch. The show narrates to us the tale of Haruhi Suzumiya, who has the ability to alter the entire reality. The major interests that she has been in are coming across aliens as well as time travelers. This is how she ends up forming an SOS Brigade. She is joined by her fellow mates such as Kyon and Yuki, and Itsuki with Mikuru in all the adventures she likes. 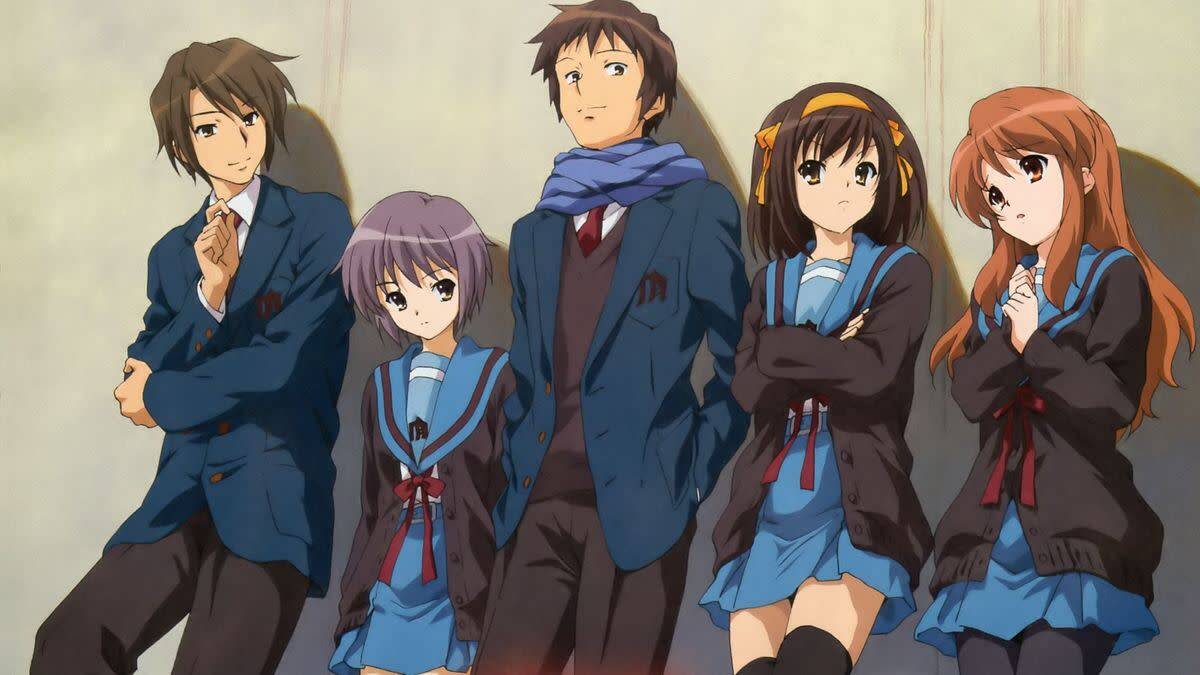 This anime show, that is, Amagi Brilliant Park, is pretty similar to what K-On! Was. The show can be considered as the brainchild of Kyo Ani. The series mainly revolves around all the outlandish creatures who have set up an amusement park on Earth. When things are all going great, the team realizes that they all do not meet the necessary grounds even to break the person who owns the theme park. This is the point in time when Kanie Seiya enters the scenes. She is pretty impressed by all that the theme park has to offer and its Maple Landers. This is when she makes up her mind to save the park from getting shut down permanently. Just like K-On!, Amagi Brilliant Park is worth a person’s watch.

Everybody should consider Love Live! School Idol Project and K-On!, the two aspects of the same coin. This anime show throws light on the same elements of slice of life and musical and the genre of a high school. All this while, you guys should keep in mind the show has employed a pretty different setting. It narrates how Otonokizaka High School is going to close because there is a lack of applicants. Kousaka Honoka, in order to save the status of their school, decides to create an idol group. She plans to attract more students into joining the club by the methods of an idol group. 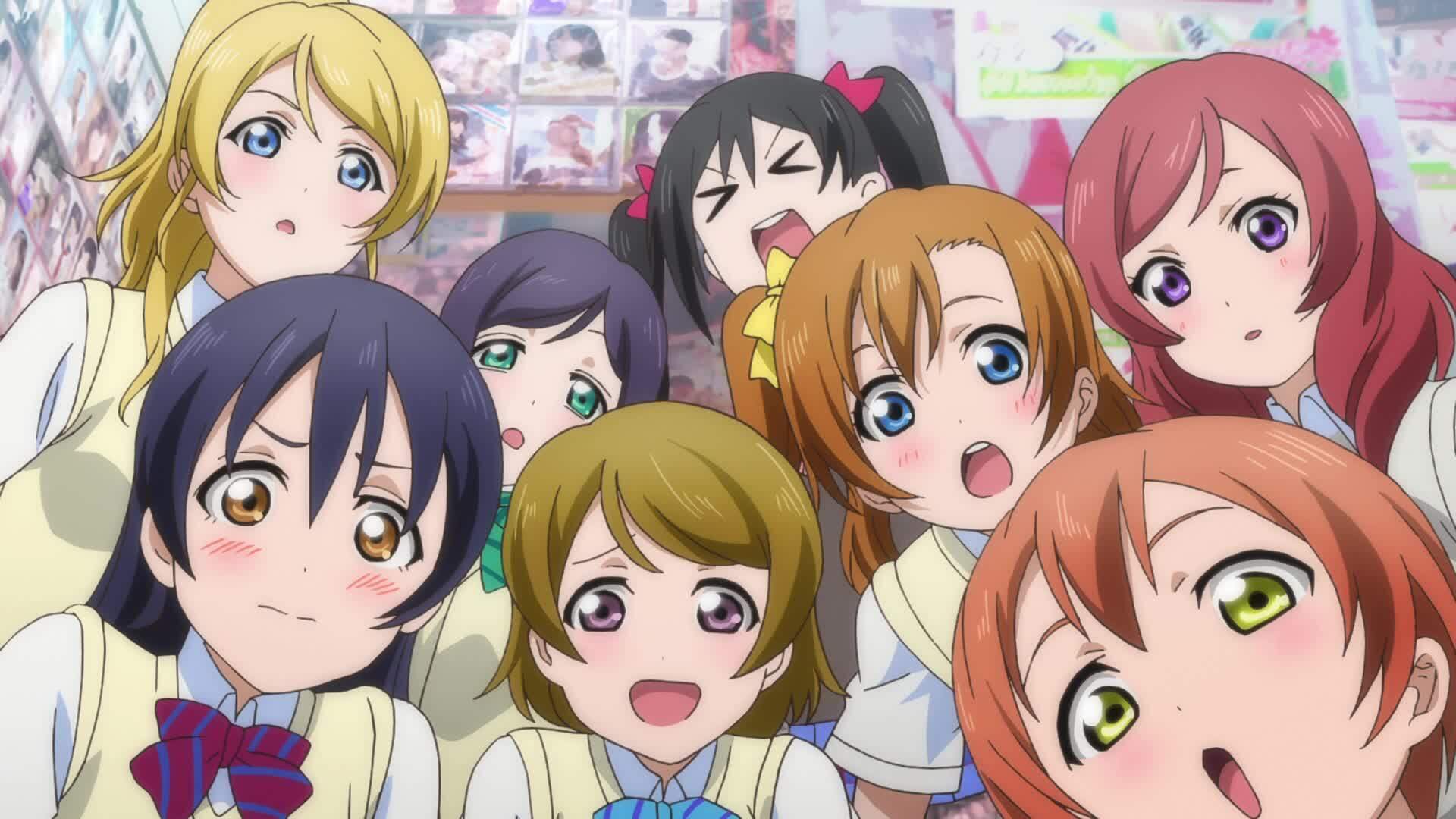 Read: Top 5 Anime Similar To Log Horizon That You Should Be Watching