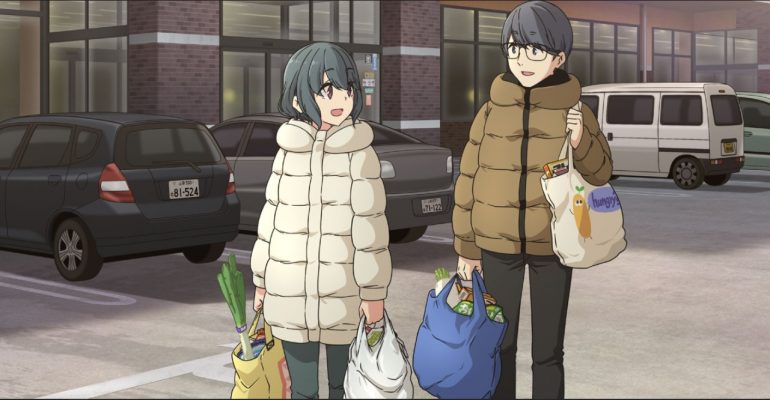 Laid-Back Camp Season 2 will be airing within a few days as the Winter 2021 season starts. The anime adaptation was first hinted at last year when Crunchyroll shared the light novel-based camping anime news. So far, the anime has released several visuals and PV, which gives a preview of what the season premiere will cover. One of the earliest visuals featured a nighttime view with a tag line that says it is a bit lonely and fun—teasing fans about what will happen in Laid Back Camp Season 2.

The second PV shows a daytime view with the girls of Laid Back Camp enjoying the scenery. Laid Back Camp is adapted from a manga serialized in Houbunsha Cominc Fuz manga magazine with Yen Press covering the English releases. The anime’s first season was produced by C-Station studios and was directed by Yoshiaki Kyogoku.

Laid-Back Camp Season 2 Episode 1 will be released on Thursday, 7 January 2021 JST. The anime will be available for streaming on Crunchyroll together with its first season. So far, it has not yet been revealed how many episodes the upcoming season will have, but taking a look at the manga content to be further adapted. It will likely be more or less the same as its first season.

The synopsis of the anime as officially revealed by Crunchyroll was as follows:

The anime is about Nadeshiko, who is a high school student. She had moved from Shizuoka to Yamanashi and had decided to visit the famous 1000 yen-bill-featured Mount Fuji. She managed to bike all the way to Motosu, but she was forced to turn back due to worsening weather. She was so stressed that she fainted on her way as she was unable to reach her destination. When she recovers, it was already night time, and she had no idea where she was. She also had no way to get home and was saved by a girl named Rin. Rin was out camping by herself and appeared an outdoorsy person. The officially revealed Key visual for the anime was as follows:

Monsters & Critics also reported that the announcement also revealed that this would also include the Laid-Back Camp movie. The movie release date is yet to be announced at this time, and a short anime episode series was also released in the commemoration of season 2 and premiered and ended last year January.

The theme song for the anime’s opening for the upcoming season will be “Seize the day,” which will be performed by Asaka. The end song will feature “Next to spring,” performed by Eri Sasaki. Laid-Back Camp Season 2 Episode 1 Preview:

About the upcoming Laid-Back Camp movie. It appears that the release date is yet to be revealed as it was announced a few years ago, and the date has not been decided on so far. More developments towards that end show that a special event about the Laid-Back Camp will be held on 11 April 2021, and the four main voice actors are said to appear. Maybe that is when the release date of the movie might be officially confirmed.

Taking a look at where the anime has left off on the manga from the first season. Laid-Back Camp Season 2 will be picking up from Volume 5 Storyline. So if you wouldn’t want spoilers from the manga content not yet adapted, this should be as far as you read.

The outdoor exploration club is making plans for its new year activities and trying to decide where they could watch the first sunrise of the year. They have the ocean and Mount Fuji as their options and whatever they end up deciding upon. They believe that it will be a good experience; meanwhile, Rin finds it challenging when a snowstorm hits the area.

On the other hand, the winter trials will be beginning with the next trip to Lake Yamanaka. Ena, Inuko, and Aki will be facing difficult times as winter days are said to be very cold.  The manga also gives focus to Nadeshiko, who is now interested in solo camping.

Meanwhile, Rin and Nadeshiko’s big sister is worried that Nadeshiko can not cope with the challenges of solo camping out there by herself. Another event to highlight from this would be that towards the end of term tests. Nadeshiko finally decides to camp out with the girls club in Izu. But a tiny guest appearance was also teased, so Laid-Back Camp Season 2 will also be filled with surprises.

The season premiere will be aired in a few days. So we will see how the second season of the anime will continue the adaptation in the future. It’s quite something to look forward to as more camping experiences are on the horizon. So, for now, we only have to wait and see how things will develop for the rest of the season.