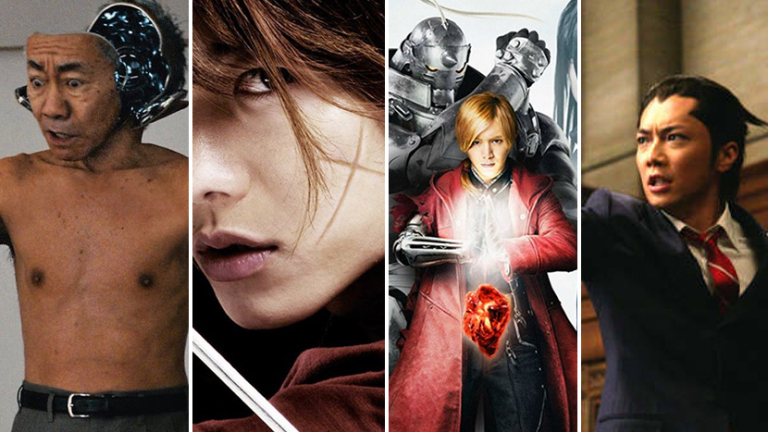 Anime live-action adaptations are not liked by many as they feature-length films with a dull storyline. Anime is known for its out of the world stories, and any modification to it makes the story terrible. Thus, they don’t have an excellent reputation across the world. It is indeed difficult to put all the elements of an anime in a movie. But, missing out on certain events that fans love can make them fail on the big screen. Thus, most anime lovers still consider anime live-action adaptations as a niche market.

However, certain adaptations are actually good and worth watching. Indeed, most of the anime adaptations failed. But, some of the live-action anime did come out great. In this article, we will talk about all such anime live actions that must be on your watch list. Keep reading the article till the end and select the one that best matches your likings.

Speed Racer revolves around numerous car races with good sound effects energetic scenes, as the name explains itself. Packed with iconic visuals and designs, this movie can blow your mind. Dropped among the fans in 2018, the anime movie didn’t gain much attention that it deserved. And ended up with lousy reviews and bad ratings.

The story of Speed Racer spins around an amazing racer who strives to become the best racing master. However, his path is not as smooth as it seems to be. He has to encounter numerous obstacles and summon the power to become the racing champion finally.

This live anime movie primarily focuses on how adorable is the relationship between parents and children. It’s not as energetic and fast-paced as Speed Racer. But, it has a good and genuine story that will keep you hooked to it till the end.

Bunny drop stars a man reveling in his 30s. He somehow happens to find an illegitimate daughter of his grandfather. Tempted by her innocence and cuteness, he begins looking after her. Overall, I would say it’s a good movie if you watch that can give you the soft feels.

All the people who loved this manga series to the core of their hearts won’t be disappointed with this live-action adaptation. The makers have covered even the minor details. Thus, making sure that they don’t hurt the sentiments of the Fullmetal Alchemist lovers.

The makers did full justice to the actual manga series. And, this explains why it is not as disliked as other live-action anime adaptations. Also, there’s one more feature called CGI that makes this movie stand out from the rest of the movies. Combined with all these special effects, you must go for it!

Despite being one of the decent manga series, the directors never planned to release it as an anime series. However, the makers later agreed on giving rise to a film out of this manga series. They did change the names of a few characters, including the leading ones. But, they succeeded in delivering the same thrills to the audience as the original manga series provided.

Jam-packed with actions and fierce characters, you will indeed find it relatable to the actual manga. Old Boy primarily focuses on a boy who is held captive. He is released after fifteen long years of wait. But, time didn’t heal the wounds that the perpetrators delivered to him. Thus, he sets it as a mission to kill all those who had been a part of this affair.

One of the best anime Ruroine Keshin keeps a live-action anime adaptation of the same level. Surprisingly, it is even better than the original anime series, as confessed by the fans. The makers did a good job by not airing the long film all at once. Instead, they released the film in three parts, and all of them did well at the box office.

All the fight scenes were perfect, intense, and kept the audience engaged. The villain Shishio Makato is displayed as deadly and ruthless as he was shown in the anime series. There is nothing off about the live-action anime, and you will certainly get a kick out of Rurouni Kenshin.

Ranging from the emotional aspects to mesmerizing music, the live-action anime has it all, just like the original anime series. The show features an excellent pianist who somehow loses this skill after a traumatic incident in his boyhood. As he comes across a confidant and an optimistic girl, his perception of life changes, and he becomes hopeful.

People who are into romance and fantasy will find it relatable. However, if you are not much into this genre, I won’t recommend watching Your Lie In April. With an absolute sad yet beautiful ending, this movie can make anyone burst into tears.

To all the teenagers who are lost in love, this live-action anime is one for you. Beautifully portraying the romance of a shy girl and a cool boy, this movie can make you fall in love with its intriguing and adorable scenes.

As the girl encounters this classmate of hers, she opens up to him about her hopes for life and everything else. The guy, too, takes a deep interest in her stories and listens to her with utmost interest. To know what plans destiny has for them, will they reunite or not, watch this movie From Me To You yourself if you haven’t watched the original anime series yet.

Yet another live-action anime representing romance between teenagers, Lovely Complex, must be on your watch list. This romantic comedy shows how society is still stereotypical about the relationships between talk girls and not-so-tall boys. This causes a problem in their lives, making it a little “complex.”

The acting skills of the star cast are top-notch. And, they are still lauded for their performance in this anime adaptation. Again, if you are looking for good romantic live-action anime with a light comedy and a tad bit of emotional drama, you must go for it!

Nearly following the original storyline, Bleach is one the best live-action anime out there. What makes this anime adaptation stand out from the rest of the movies is its runtime. Unlike other live-action versions that are lengthy with boring scenes, Bleach has a runtime of approximately 2 hours, even shorter than that.

It is fast-paced and covers almost all the prominent series of the original anime series. If you haven’t watched the actual anime yet, you should go for the live-action version, and you won’t be disappointed as it doesn’t miss out on anything!

This live-action anime is not very old. It was dropped in 2015 and is still talked about among anime lovers. It is adapted from a Japanese manga canned Ichigo Takano, who is well-known in Japan for making romance-based shows. And Orange is one among them.

Starring Tao Tsuchiya and Kento Yamazaki, Orange is one the best live-action anime. And, if you haven’t watched it yet, you are missing out big time. With perfect cinematography and numerous turns, this rom-com is magical!

Also, Read Sakugan TV Anime – Everything We Know So Far!

Sex Education Season 3: A Detailed Analysis Of The Third Installment