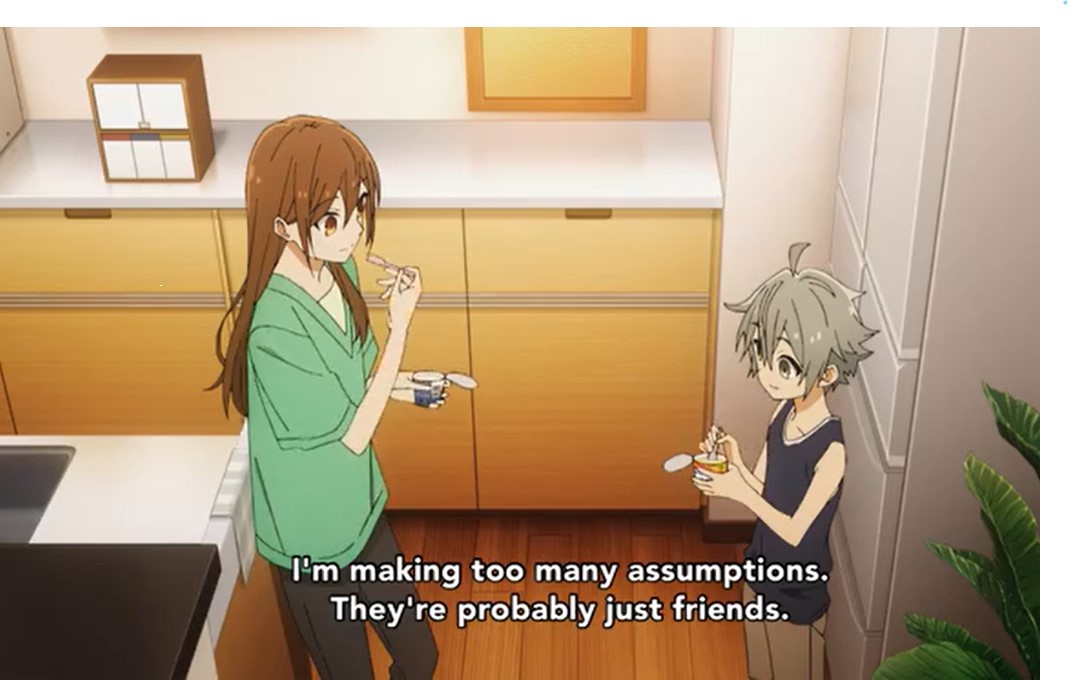 Sato asked if Hori will stay home again, and she comments that she still not feeling well. Hori is wondering what she faked being sick and skipped school also. She realizes that Miyamura has proposed to her, and she is too shy to face him. On his way to school, Sato saw Miyamura walking with another girl. He is surprised why since Miyamura only hangs out with Hori. Later after school, Sato went home and enjoyed eating yogurt with Hori.

Horimiya Episode 6 will be released on Sunday, 14 February 2021, at 12:30 AM. Those who would like to stream or watch this Anime officially can visit Funimation and AnimeLab. This Anime is available on different streaming platforms. Take a look below. 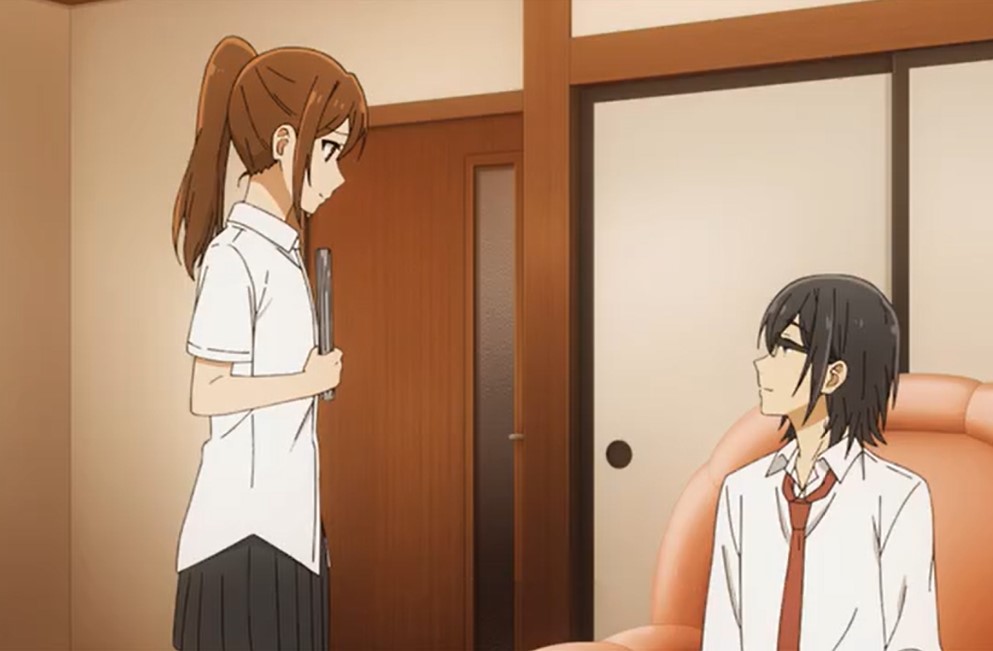 Hori regrets that she did not go to school, and she didn’t even text Miyamura. She concludes that the girl might be a middle school friend like Shindo. The next day Hori decided to go to school. When she enters the class, she got annoyed when Ishikawa greets her. She asks Ishikawa about Miyamura, and Ishi comments that Miyamura was worried about Hori. Ishikawa said Hori could go and sit near Miyamura by the window. Hori just went away with fear about how she is going to talk with Miyamura.

Later Miyamura met with Hori, who wanted to ignore him. Miyamura reveals that he knows that she was awake, and that’s why he proposed. Hori turns back and asks who the girl that Miyamura was walking with is. Miyamura tries to remember while Hori thinks that Sato might have seen the wrong guy. Miyamura reveals that the girl is Chika, and Hori is surprised. She comments that she never heard him calling a girl by her first name.

Hori comments that Chika was hanging off of Miyamura in public. Miyamura comments that it is not what she is thinking, and he and Chika are not like that. He reveals that Chika is Shindo’s girlfriend. Miyamura said that Chika’s leg got injured, and he let her an arm to lean on. Hori gets tired since Miyamura is just talking about Chika. She hit Miyamura with a book and told him to stop telling her about Chika.

Hori left Miyamura, who begs her to listen, and Miyamura realizes that he doesn’t know Chika’s last name. Miyamura is worried about why Hori is mad since nothing is going on between him and Chika. Later Miyamura visited Hori at her home, and she is surprised since she hit him earlier. Miyamura comments that he can leave if she doesn’t want him to stay. Hori told her that he could stay.

They both wonder why they are angry at each other, and Hori apologizes. She comments that it is for hitting him twice with a book. Miyamura told her that it is his fault for bringing up Shidou’s girlfriend issue. Hori realizes that Miyamura doesn’t know Chika’s last name. She asks him about it, and he confesses she laughs at him. Hori told Miyamura that he should have told her earlier that chaos would have never happened. 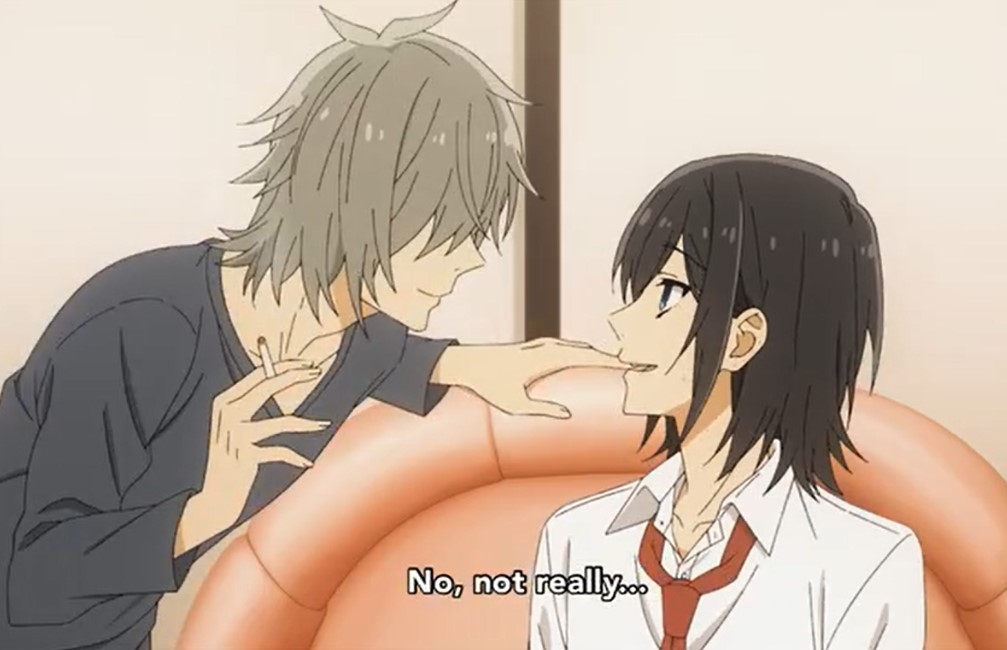 When the two were about to open their hearts to each other, Kyosuke arrives. He is smoking weed and ask Hori who is that guy. Hori told Kyousuke that no smoking in the house. Kyosuke blows the smoke of week at Miyamura’s face asking if he wants to try. Miyamura said no, wondering who this guy is. Hori kicks Kyosuke, who comments that big girls don’t hit their daddies. Miyamura realizes that Kyosuke is Hori’s father.

Hori went to prepare food for her father while he talks with Miyamura. Kyosuke asks if he is interrupting something. Miyamura said no, and Hori came back with his food. Miyamura said he is the only kid in his family. Kyosuke comment that he cannot have his daughter. Miyamura got shocked, and Kyosuke said he is just kidding; he always wanted to say that to any guy. Kyosuke keeps on teasing Miyamura, who notices that he is high.

Kyosuke calls Hori and asks her if Miyamura is her boyfriend. Miyamura and Hori look at each other. Hori asks if Kyosuke has a problem with that, and Kyosuke comments that he doesn’t like boys with long hair. Hori asks Kyosuke if he has looked in a mirror. Miyamura comments that he will cut his hair, and Kyosuke said he could tie it back so that it won’t go to waste. Later the two study together.

You can find out how Miyamura has confessed for the second time by reading Horimiya Episode 5.