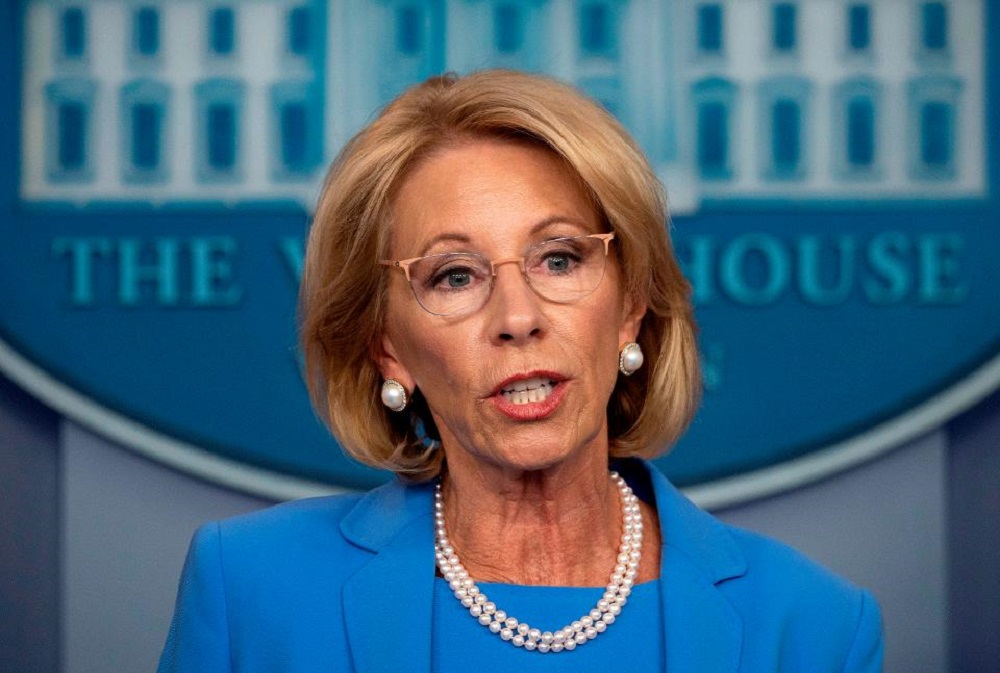 Betsy DeVos: the Current Secretary of Education of the United States.

Elisabeth Dee DeVos is the current Secretary of Education of the United States. She is better known as Betsy DeVos. Let us dive further into the article to learn more about her and her net worth.

DeVos was born on 8th January 1958 in Michigan, US. She was born to Edgar Prince and Elsa Zwiep. Her father was a billionaire industrialist who founded the Prince Corporation. She was the eldest amongst the four children Edgar and Elsa had. She graduated with a BA in Business Economics from the Calvin College of Michigan. DeVos was a part of campus politics. She was even a part of the Republican National Convention in 1976 in a program for young Republicans. 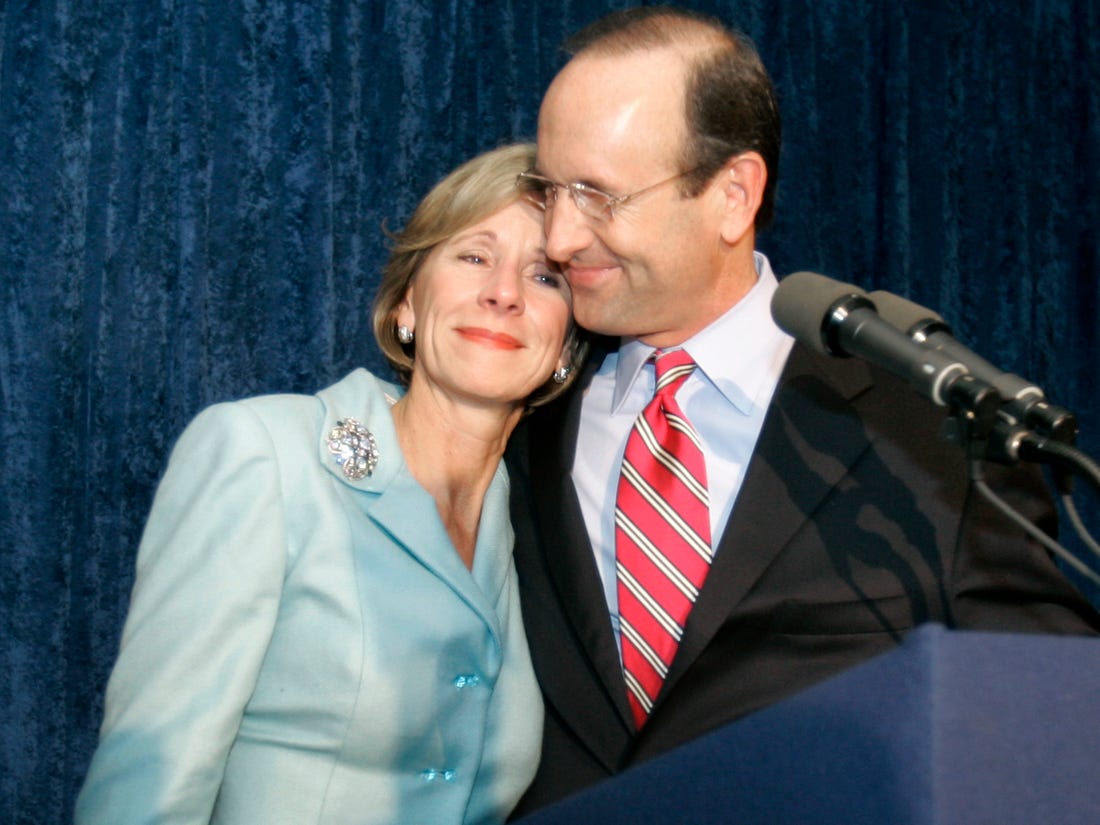 Betsy DeVos and Dick DeVos captured during an event.

Betsy DeVos and Richard Marvin Devos got married in 1979. Richard, better known as Dick DeVos is a billionaire and heir to the company Amway. He used to run Amway’s parent company Alticor. DeVos and Dick and have four children together, namely Rick, Elissa, Andrea, and Ryan. Betsy’s brother is the founder of Blackwater USA which is a private military services contractor.

In 1982, DeVos participated in the Michigan Republic Party and then became its member. She was elected as its local precinct delegate twice between 1986-1990. From 1992 to 2000, she served as the Committeewoman and the Chairwoman of the Party. She was active in fundraising. She was also a member of the Bush re-election campaign of 2004. In 2008, she hosted a fundraiser at her home for the Republican Party. During the 2016 elections, she slammed Trump as an ‘interloper’ who in no way represented the Republican Party. Then in November 2016, Trump nominated DeVos for the post of Secretary of Education. The media started criticizing Trump’s decision highly. Trump’s decision was criticized stating, DeVos was an anti-public education nominee and not an educator or an education leader. On the other hand, Jeb Bush and Mitt Romney appreciated Trump’s choice. They acknowledged it as an outstanding pick or smart choice. 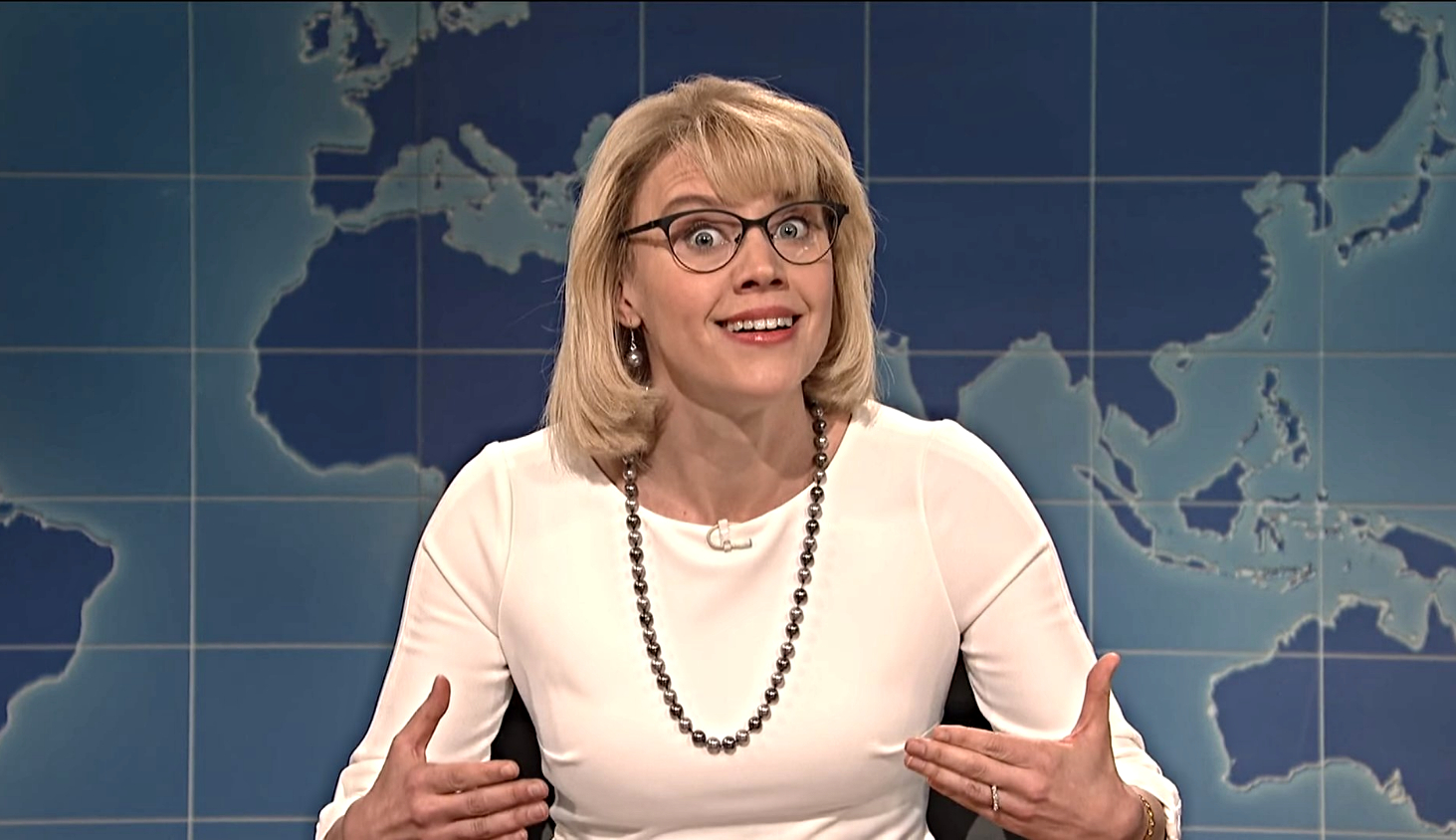 DeVos’ confirmation hearing for the same caused a lot of controversies. During her confirmation, the democratic senators interrogated her thoroughly about her wealth and her experience on student loans or financial aids. It was also reported that she copied the Obama administration’s quotes in her answers which were submitted to the Senate. She made a statement about guns being available to people at school due to a threat from grizzly bears. Comedians like Jimmy Kimmel, Kate McKinnon, James Corden, and many more mocked her for this statement of hers. Finally, in February 2017 she took her oath as the Secretary of Education. Initially, people protested against her tenure. In April 2017, she undid Obama’s several educational policies which provoked the protestors. Then, approximately $7-8 million were spent on Betsy’s protection.

DeVos along with her husband founded the Windquest Group in 1989. She is currently its Chairwoman. She has also produced a Broadway based on ‘Scandalous: The Life and Trials of Aimee Semple McPherson’ in 2012. The show closed three weeks after its debut due to negative reviews. She is a chief investor and board member of Neurocore. Neurocoreis a group of brain performing centers. After her appointment as the Secretary of Education, she had to step down as a board member. But, she continues with her investments in the company. 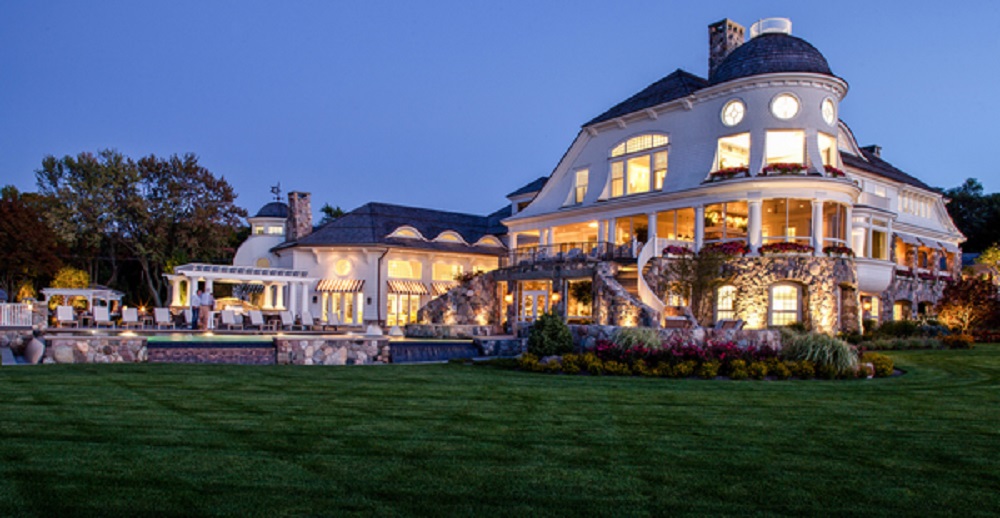 In 1989, The Dick & Betsy DeVos foundation was established. The aim of the foundation was to cultivate leadership, accelerate transformation, and leverage support in different areas. The foundation donates to hospitals, art organizations, Christian schools, and to many more institutions. Betsy has also served as the board member, treasurer, and chairperson of the Action Institute. Besides all this, the DeVos family provides students with an annual scholarship at Northwood University. DeVos is of the belief that school vouchers are of great importance. She feels so because it would help students to attend private schools with public funding. She has emphasized this idea of hers many times. Hence, she was elected as the chairwoman of the Board of Alliance for School Choice.