Sam Mende’s Movie 1917 takes us back to the brutal years of humanity that is World War I. The movie narrates the tale of two Brave British soldiers that saved the British army from falling into the trap of the wicked Nazis. 1917 is quite anxiety-provoking for sensitive people as it includes scenes of brutal killings. The two British soldiers Schofield (George MacKay) and Blake (Dean-Charles Chapman), had to pass important information to their country. But they were stuck in a trap set by Germany. It is a real survival story if the soldiers with a lot of PTSD. However, they succeeded in their mission in real life which inspired an amazing screenplay for the reel life.

The movie tells us what happened On 6 April 1917, where the aerial survey has witnessed that the German army, which has pulled back from a quarter of the Western Front in northern France, is not in recession but has made a strategic abandonment to the new Hindenburg Line, where they are serving to overwhelm the British with Artillery. 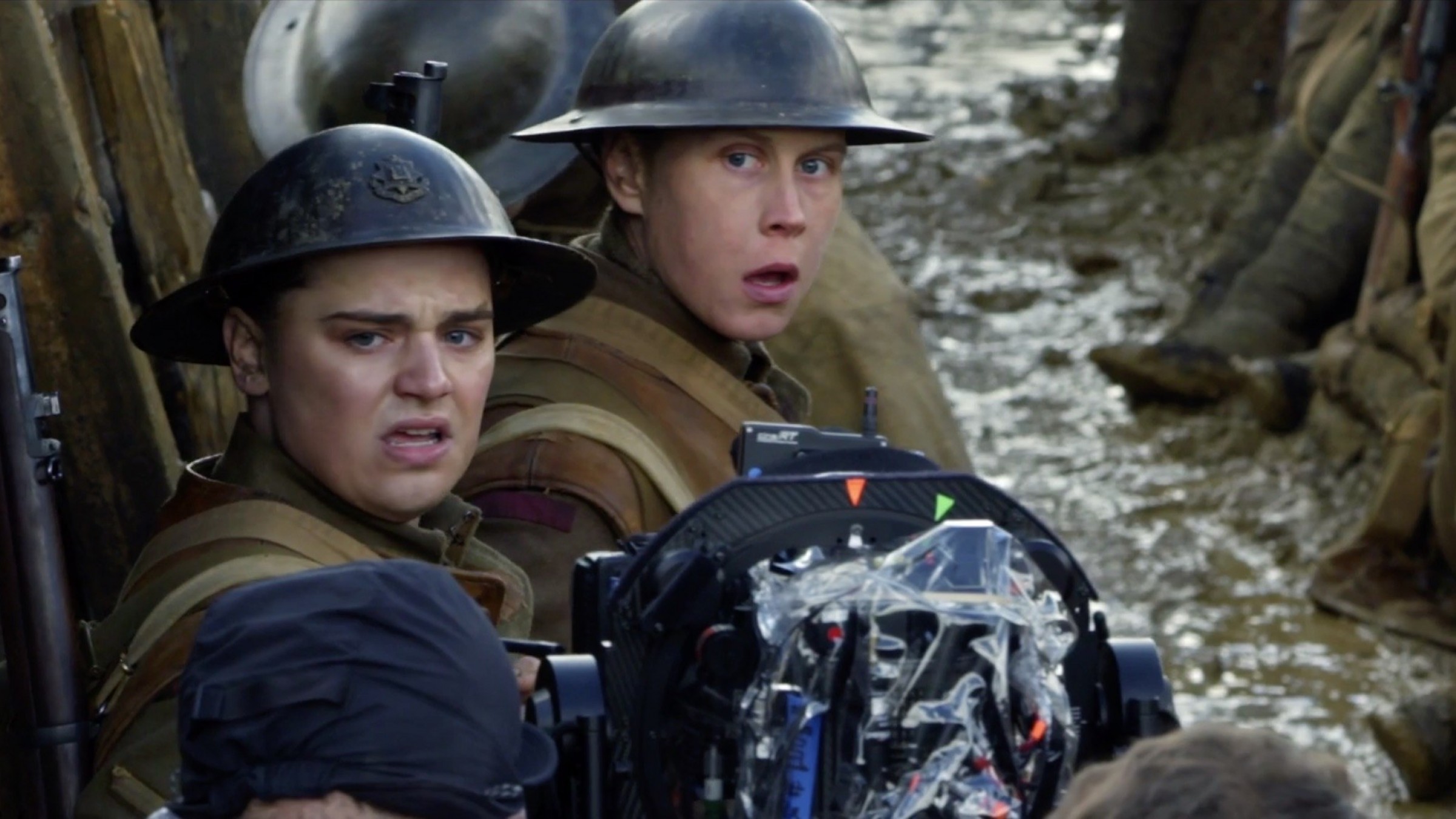 In the British channels, with Field Telephone lines cut, two young British Lance Corporals, a veteran of the Somme, Tom Blake, and William Schofield are required by General Erinmore to carry a piece of information to Colonel Mackenzie of the Second Battalion of the Devonshire Regiment, calling off a scheduled attack the next daylight that would endanger the lives of 1,600 men, including Blake’s brother Joseph, a lieutenant. Schofield and Blake intersect no man’s land to reach the stranded German trenches. However, Schofield injures his left hand along the way. The sequence shows a breathing battlefield and a soldier’s state of mind. I would appreciate the movie for showing the reality on the screen, which most of the directs miss out on.

In an underground barracks, they discover a Germans’ tripwire, which a rat immediately triggers. The explosion almost kills Schofield; However, Blake saves him, and the two slip. They arrive at a deserted farmhouse, where a German plane is shot down in a dogfight with Allied aircraft. Schofield and Blake save the tingled pilot, but the pilot stabs Blake and is shot dead by Schofield. As he dies, Schofield comforts Blake, agreeing to complete the mission and write to Blake’s mother.

Taking Blake’s rings and Dogtag and Erinmore’s letter, he is picked up by a passing British unit. It is said that if a person saves your life, that person is equivalent to God. But Nazis are famous for proving our saying wrong, which is quite evident in the movie. The sequence also narrates the story of a fallen soldier who will not even relieve a proper funeral or the respect he deserves. As I said, this movie is all about sab reality that we ignore in the light of entertainment.

The Strike Of The Dawn

A ruined canal bridge near Ecoust-Saint-Mein blocks the British lorries from crossing, and Schofield prefers to part with them. He uses what is transmitted of the bridge to cross solely and comes under fire from a sniper. Exchanging shots, Schofield injures the sniper and advances, at which point he and the sniper shoot each other concurrently. The sniper is killed, while Schofield is thumped in the helmet and knocked out.

He regains his consciousness at night and discovers the town in flashes. He finds a French woman hiding with a newborn. She dresses his wounds, and he gives her his preserved food and milk from the farm. Despite her pleas, Schofield moves after hearing the nearby clock’s chimes and understanding that time is running out. Encountering German soldiers, he kills one to death and escapes pursuit by diving into a river. He is tidied over a waterfall before arriving at the riverbank. In the woods, he sees D Company of the 2nd Devons, which is in the last loop of the attack. As the company begins to move to the front, Schofield tries to reach Colonel Mackenzie.

To All The Fallen Brother

Realizing that the gutters are too crowded for him to make it to Mackenzie in time, Schofield goes “over the top” and dashes on the open battlefield correspondence to the British trench line, just as the riflemen begin their charge. He forces his way in to meet Mackenzie, who studies the message and involuntarily calls off the attack. Schofield then finds Joseph, who was amongst the first wave and is bloodied but is unhurt. 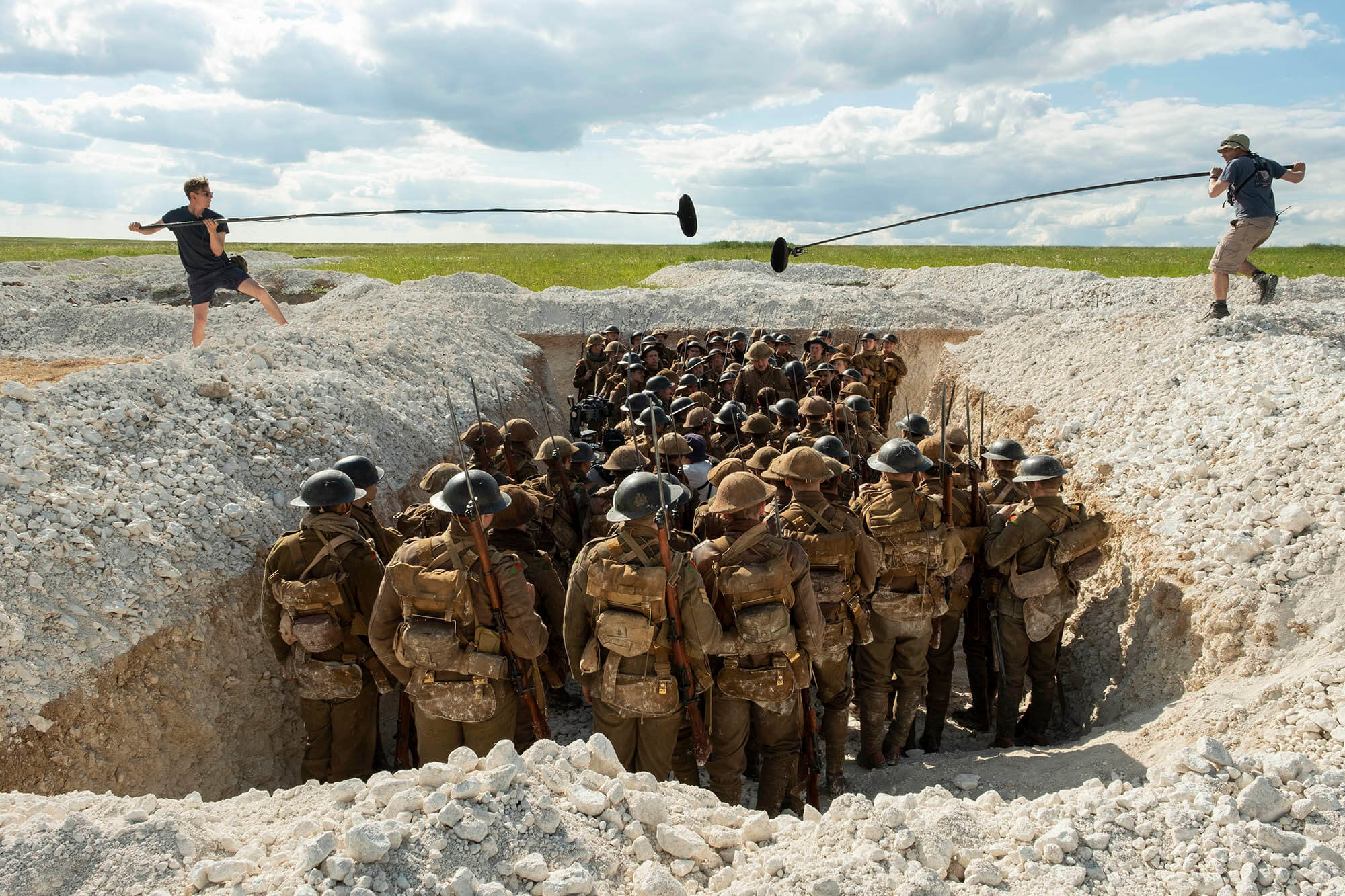 Behind the Scene From The Movie 1917

Schofield tells Joseph of his purpose and that his brother Tom has died, giving on Tom’s rings and dog tag. Joseph is profoundly upset about his brother. However, he thanks Schofield for his troubles. Schofield asks to write a letter to their mother about Tom’s heroics, to which Joseph agrees. Drained, Schofield sits under a nearby tree, looking at pictures of his wife and children. The movie’s end was very impactful as it narrates that surviving is not enough for a soldier. After coming out alive from a battlefield, a soldier has to be the carrier of the bad news that their friend is no more. But they don’t have the time to weep for their fallen brothers because War waits for none.

No one thought that showing the reality and the dark side of a soldier’s life would fill the pockets of the production as Deadline Hollywood measured the net profit of the movie to be $77 million. 1917 grossed $159.2 million in the Canada and United States, and $225.7 million in other nations, for a worldwide total of $384.9 million, against a composition budget of $90–100 million.

It proceeded to gross $36.5 million for the weekend (beating the original predictions of $25 million), matching the first film to dethrone Star Wars: The Rise of Skywalker at the box office. In its second weekend of wide release, the movie made $22 million, finishing third following Dolittle and Bad Boys For Life. It then made $15.8 million and $9.7 million the following two weekends, settling in second both times. During the four-day-weekend of the Academy Awards, the movie made $9.3 million.

Roger Deakins’s cinematography is mesmerizing, choreographed, and performed to completeness around War’s horrific ingredients. Some of the cases are visually breathtaking and demand to be returned to absorb everything they offer. Thomas Newman’s score heightens the experience to towering heights. This film could sweep up all the professional awards at the Oscars this year. All these circumstances firmly put director Sam Mendes in the upper echelon of directors currently serving today, if he wasn’t there already. ‘1917’ is tense, captivating, fastidious, horrifying, and stirring. An extraordinary filmmaking achievement.

Brilliantly shot and directed to appear as a unique take, every camera action is intelligent and serves a mission. The mission unfolds because the edits are concealed behind them, combined with specific blocking. However, well exceeding the one-take shot’s ingenuity, the story keeps you on the edge of your seat.

This is reflected in the performances as well, with both actors swapping the narrative center from each other in meticulously designed storytelling beats. The two young stars Dean-Charles Chapman and George MacKay, are interesting as facets of their otherwise conventional personalities. The mission is the key locus as the two soldiers make their way through frequently dangerous situations. Along the way, they confront key army personnel, represented by a cameo row of British actors, including Benedict CumberbatchAndrew Scott, Colin Firth, Mark Strong, and Richard Madden, who put in the abstract. However, impressive performances.

Another masterwork by Sam Mendes. Sam Mendes and Krysty Wilson-Cairns are the representatives. This is the first movie in history to have a female writer for a significant war movie, which is a great thing. Sam Mendes produced this story base on his grandfather’s tale that appeared in WW-1. Not many movies are made on world war 1. Generally, we get world war two films every year.

Loved George Mackay and Dean Chapman so much. They both did a fabulous job. Colin Firth, as the general, is good. Andrew Scott is great and funny in just three minutes he got. First shot, when Mark Strong appears, we only get to see his lower half of his body. We just hear his voice first. Then I realized that he is a great actor to act with just his lower half. 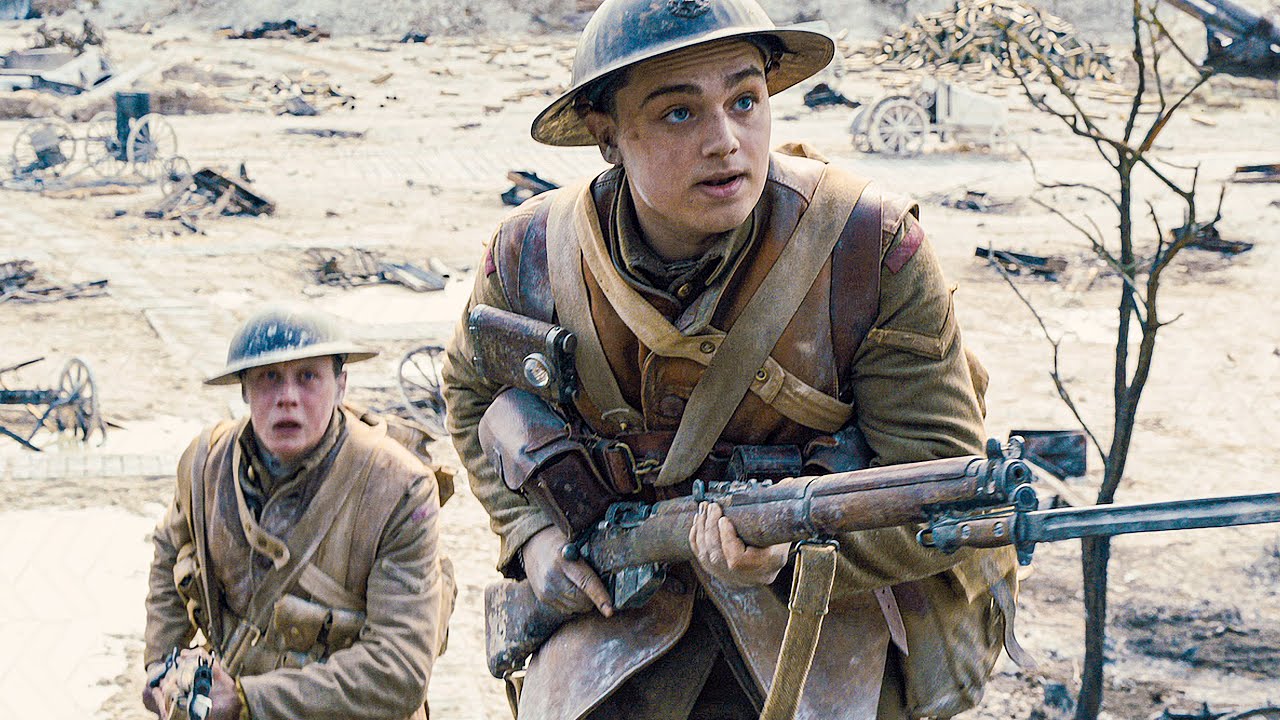 Schofield and Blake Hustling In The Battle Field.

Benedict Cumberbatch looked cool in a harsh look just for few minutes. However, he did not have that much to perform still. We understand his motives, his stubbornness his whole character in just a little time. I loved Benedict’s line, “There is only one way this war ends, the Last Man Standing,” It such a cool dialogue. Finally, Richard Madden shows up at a great moment to pull emotional strings along with George MacKay, and it worked for me.

George’s run at the end is epic, and the way he fells two times which is not planned before while shooting made it more natural and realistic. I love that scene. The best scenes in this movie are George MacKay and Dean Chapman in no man’s land and the empty enemy barracks, George escaping from the enemies, the Come Back to Us song scene, George sprinting across the battlefield, and George and Richard Madden scene.

Great score by Thomas Newman. When the “Come Back to Us” song came in the movie George Mackay falls to the ground, and a feeling of relief, relaxation comes to him, a feeling that he reached his destination occurs to him. I felt a hush inside me when the song played. I am already a huge fan of Thomas Newman, my fandom of Sam Mendes, Roger Deakins increased, and I am a fan of George Mackay and Dean Chapman from now. Oscar is worthy of the best picture, best cinematography, best sound editing, and mixing.