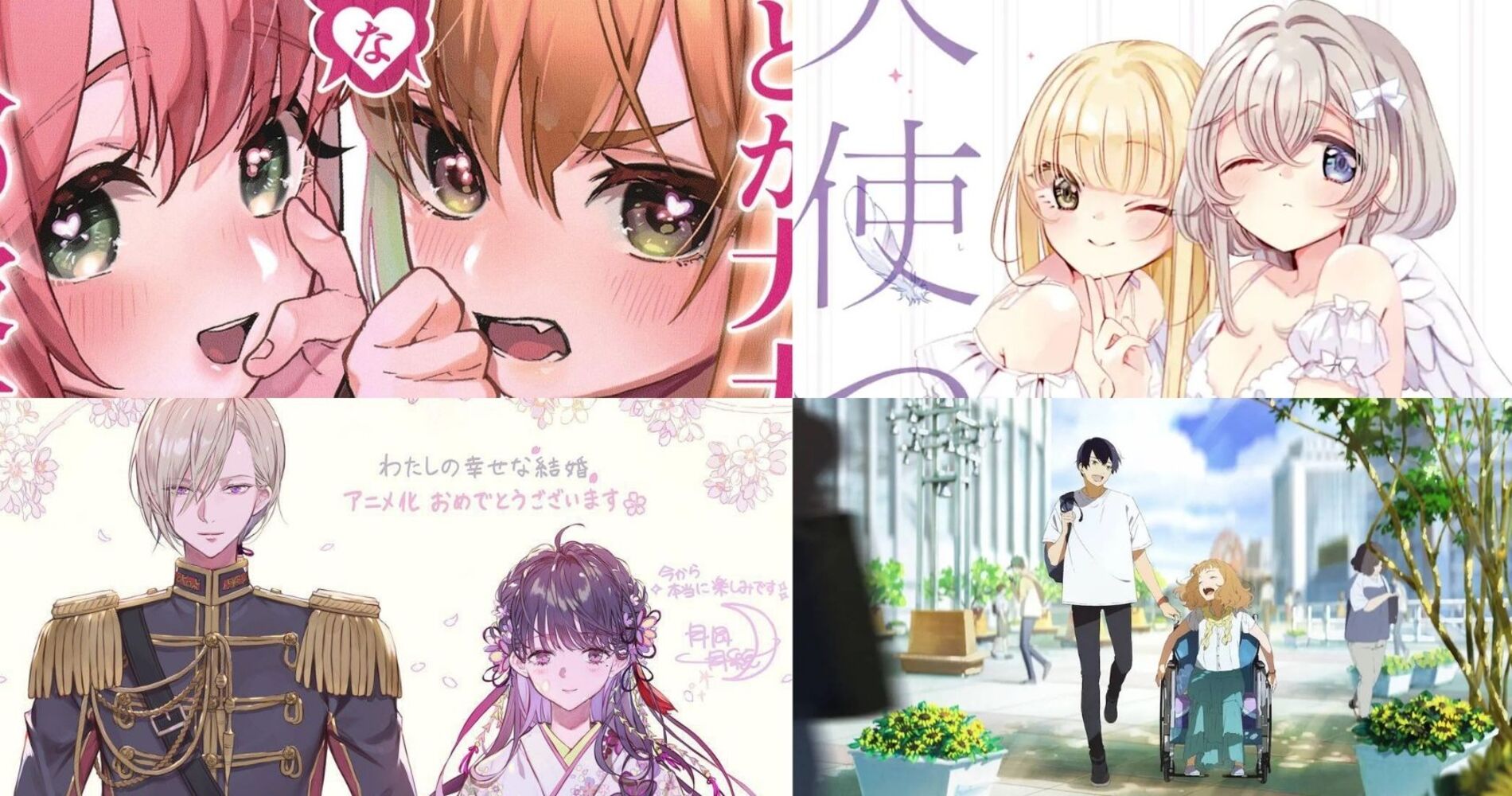 Who doesn’t love mangas, well we do. So, in this article, we will compile a list of the 10 best new romance manga in 2022. Romance manga, also known as shoujo manga, has been popular in Japan since the 1950s. Manga is being published in greater quantities than ever before, so whatever your tastes, you can expect plenty of manga to debut in 2022.

Although romance manga is typically targeted at shoujo manga enthusiasts, it has a far wider audience than you may think! Even though many people prefer watching romance shows to reading manga, these titles will catch you right away. That’s because they feature lovely artwork, interesting narratives, and fantastic characters. The new manga series this year provide a wide range of content, whether you seek a beautiful romance or a tragic drama.

This manga’s main character Aijo is very unlucky in love. After asking out his 100th girl (and promptly failing), he seeks guidance from heaven…only to find out that the god made an error, and Aijo’s rejections were a celestial mistake To resolve the situation, the god makes each girl Aijo’s soulmate, but there is a catch – he has to return their feelings, or else they’ll die. 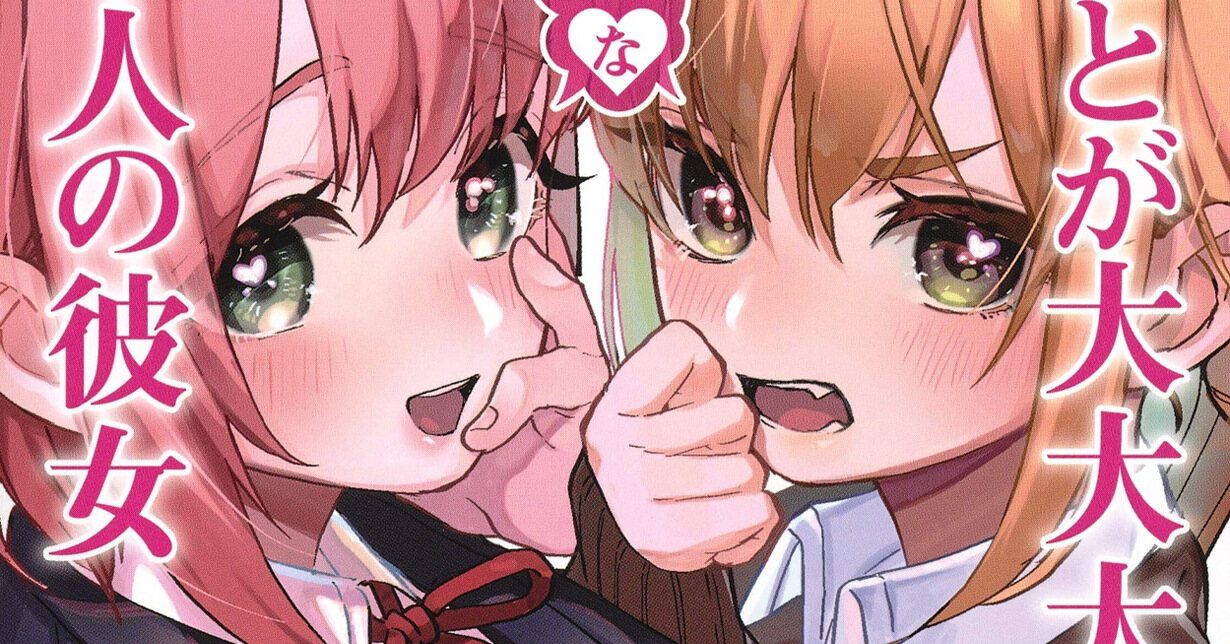 Due to the high stakes involved in the series, Aijo is not just a plucky protagonist, but almost unlucky because of the supernatural twist. We’ll be surprised if there is not an anime announcement anytime soon, since the series has been selling well in Japan (with eight volumes already published) and has a growing online following! The 100 Girlfriends Who Really, Really, Really, Really, Really Love You English version release date was February 22, 2022

9. Banished from the Hero’s Party, I Decided to Live a Quiet Life in the Countryside

As a result of a wealth of light novels already available, as well as an excellent first season of anime, (Banished from the Hero’s Party, I Decided to Live a Quiet Life in the Countryside) is now advancing into manga form. 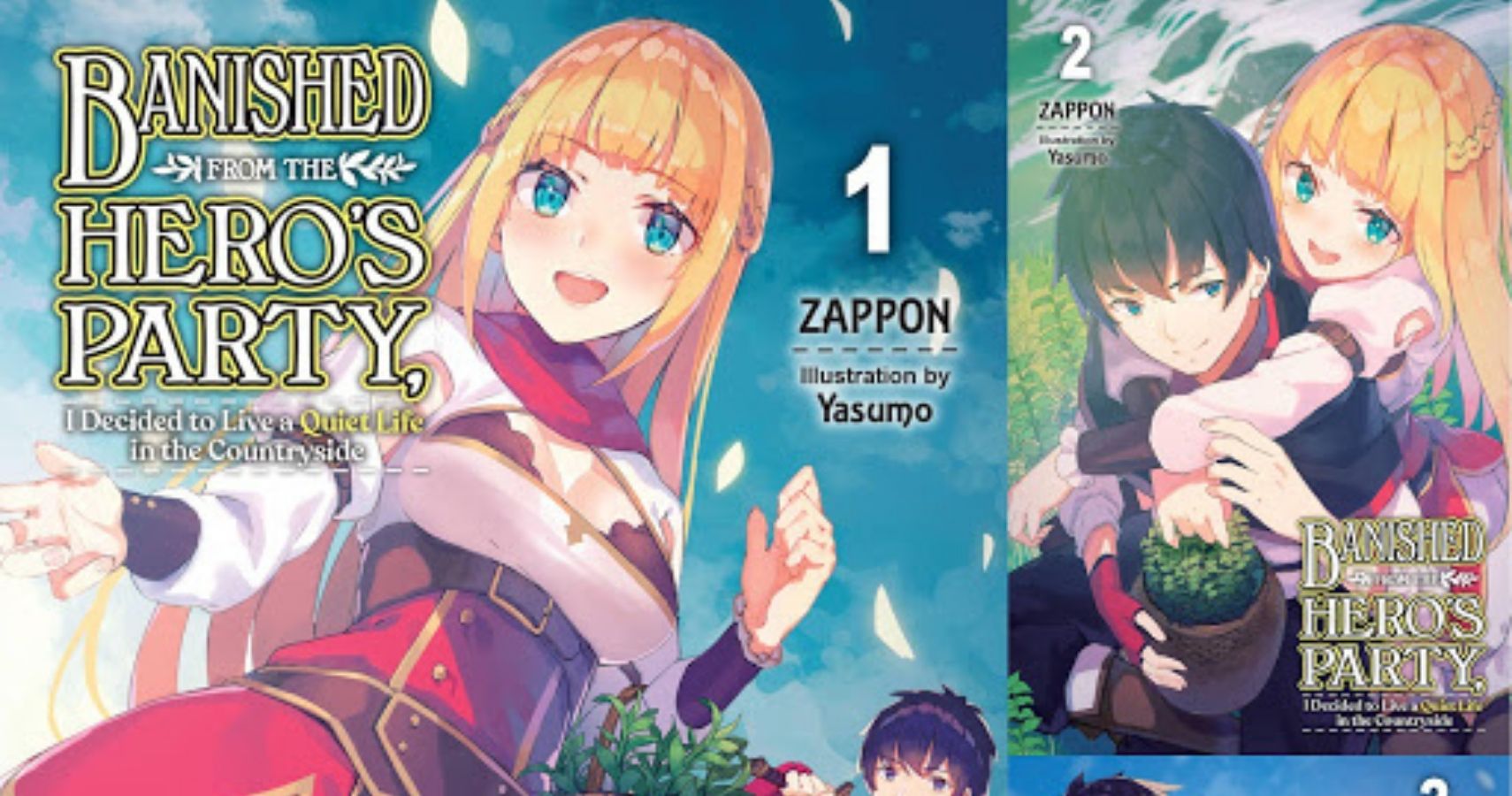 Banished from the Hero’s Party, I Decided to Live a Quiet Life in the Countryside

Despite its epic fantasy overtones, this series is best known for the romantic relationship between the main characters Red and Rit, who used to be his traveling companion. Red is a former hero rejected from the Hero’s party when it seemed he was holding them back.

The English version of the Hero’s Party was published in March 2022, so if you’re interested in reading the manga adaptation, it’s available now.

A romantic comedy with the classic tropes of childhood sweethearts and oblivious male leads. Morihito, who has the blood of an ogre, has been friends with Nico since they were three years old. When Morihito becomes Nico’s sworn protector, he must live with her under the same roof…but he’s completely unaware of Nico’s crush on him! 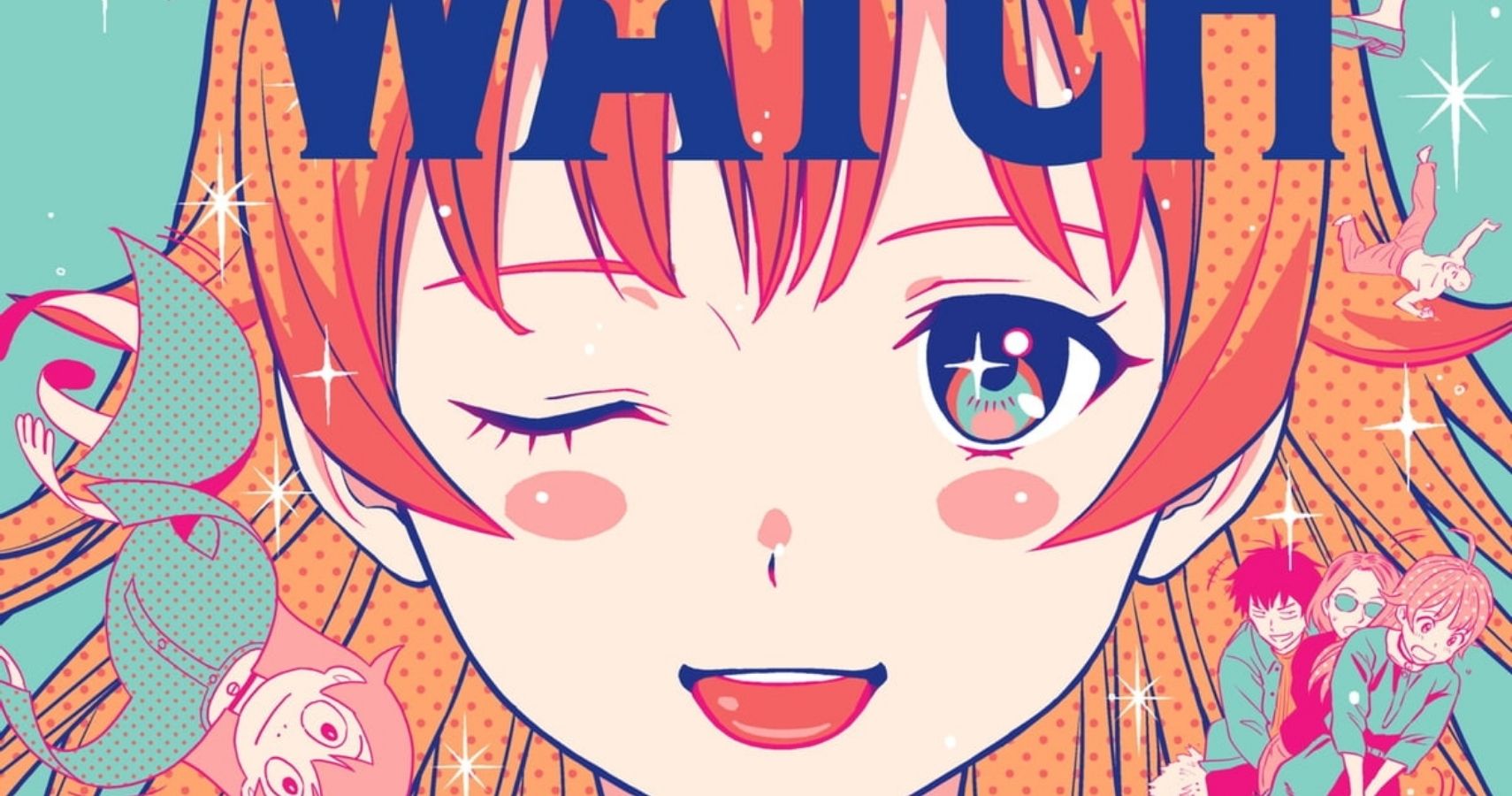 While Witch Watch was serialized on Shonen Jump (Manga Plus), we read a few chapters, and can tell you it is a manga you should check out – it’s sweet, enjoyable, and funny all at the same time. Nico is utterly endearing in a clumsy-love-interest way, and Morihito is stubborn and serious.  Witch Watch volume 6 was already released on 3 June 2022.

7. Chitose Is in the Ramune Bottle

It adapts the light novel Chitose-Kun wa Ramune Bin no Naka (Chitose Is in the Ramune Bottle). However, the titular Chitose Saku is doing pretty well: he is a member of the school’s top social caste, the “normies,” surrounded by pretty girls and handsome boys. 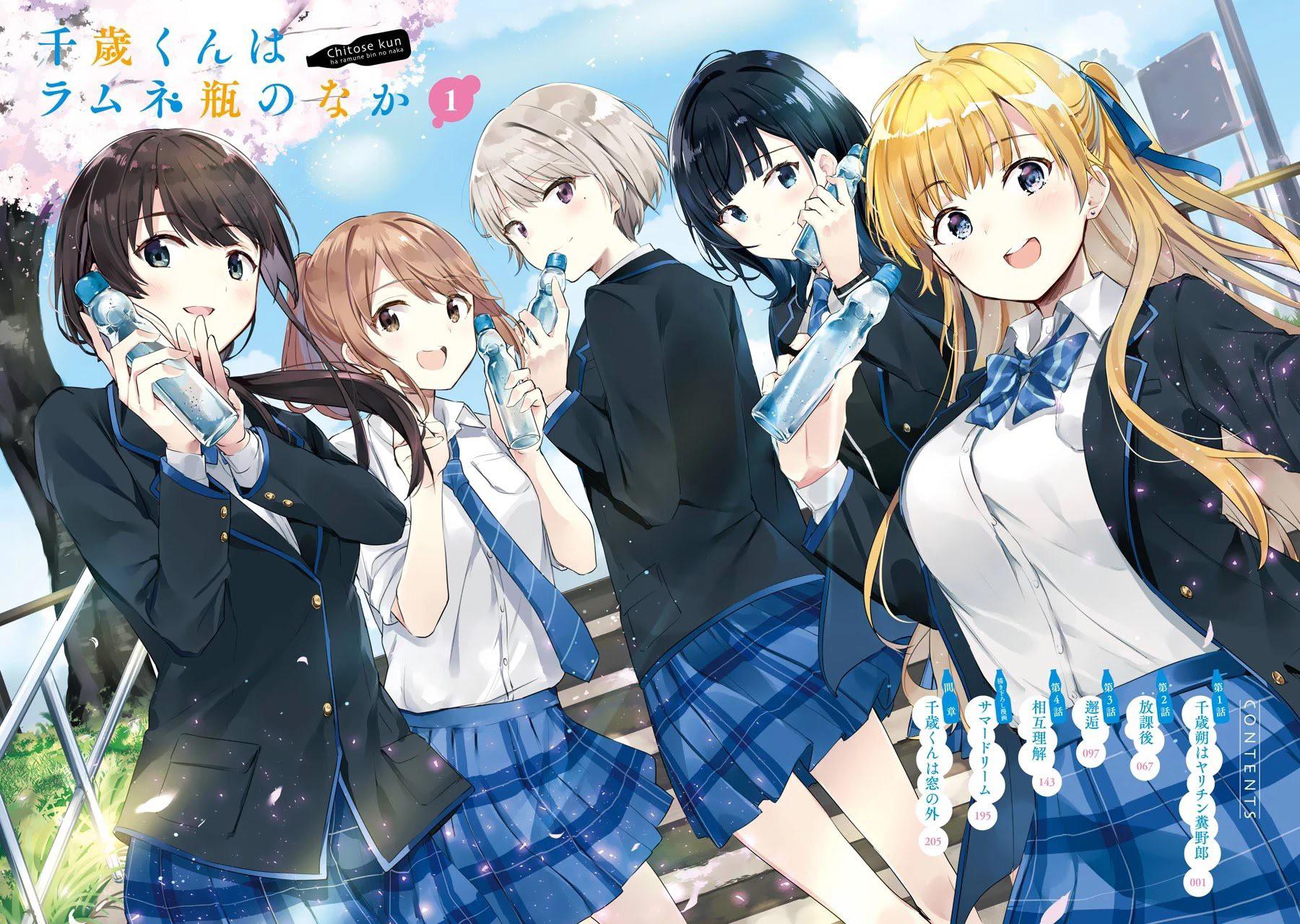 Chitose Is in the Ramune Bottle

Even though Chitose is the leader of his second-year class, he has a tough time acclimating to a fellow student who has been holed up in his room for months. Chitose is in the Ramune Bottle isn’t your typical romantic comedy, with moments reminiscent of Yahari Ore no Seishun Love Come wa Machigatteiru. Readers who are curious about the reference to Ramune soda might be interested to know that the marble that blocks the top of the Ramune bottles cannot be removed without breaking them. Beginning in July 2022, Chitose Is in the Ramune Bottle is available and you can purchase a copy.

The first chapter of Ookami Buka-Kun to Hitsuji Joushi-san was released on September 21, 2019, on the author’s Twitter account. The manga was serialized in Comic Bunch on September 19, 2020. Seven Seas Entertainment has published the series in English since February 22, 2022, under the title I’m a Wolf, but My Boss Is a Sheep. 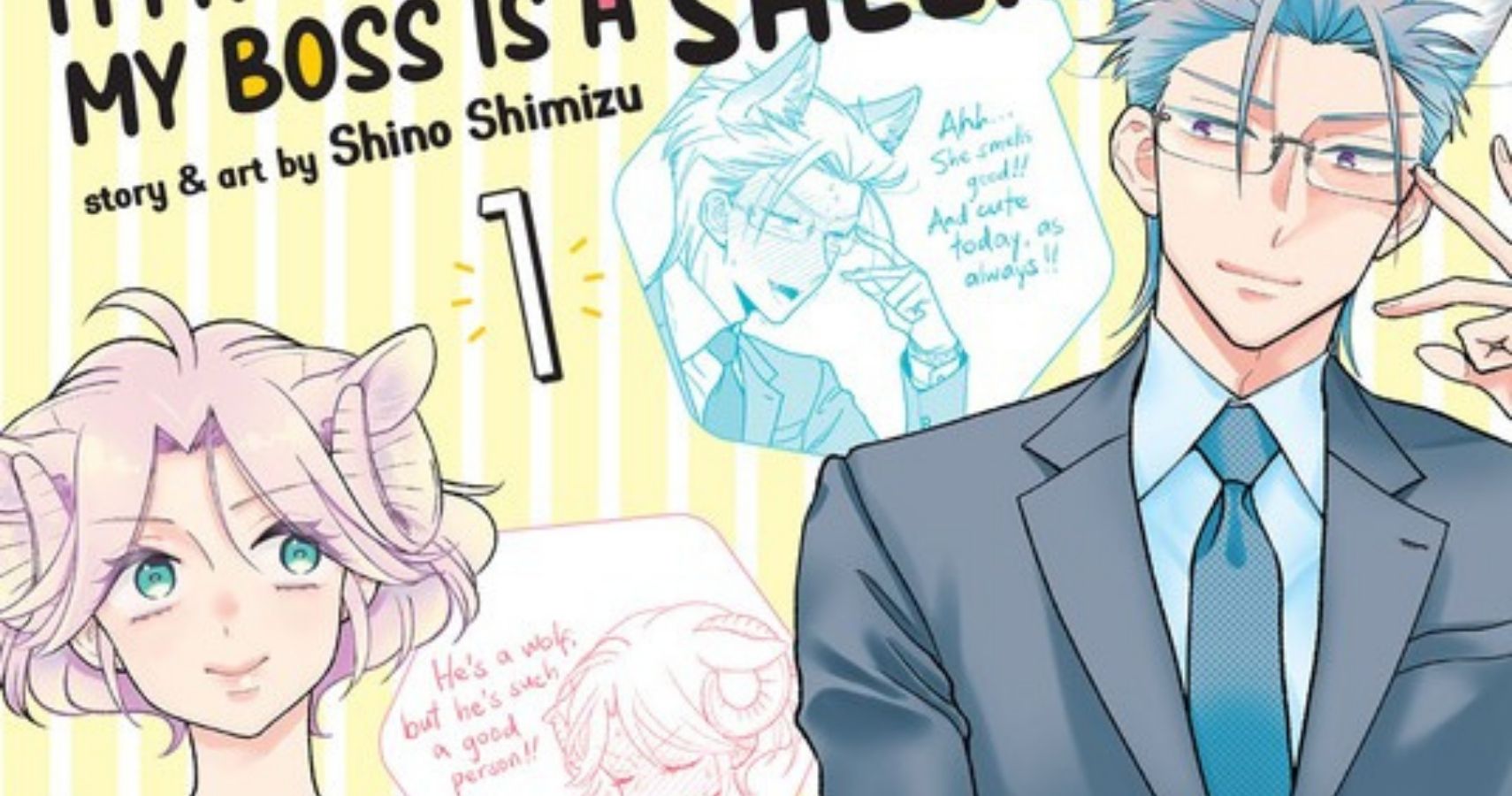 There’s no doubt office romance is a growing genre, and Ookami Buka-Kun to Hitsuji Joushi-san adds a fresh take on the concept of “wolf among sheep”. Oogami is a salaryman with a crush on his supervisor, and when he gets transferred to her department, he realizes that he’s a literal wolf.

Interested in a love story that’ll make you cry your eyes out? Then we have a manga for you: Josee to Tora to Sakana-Tachi (Josee, the Tiger, and the Fish) arrives this year following the similarly titled 2020 movie. 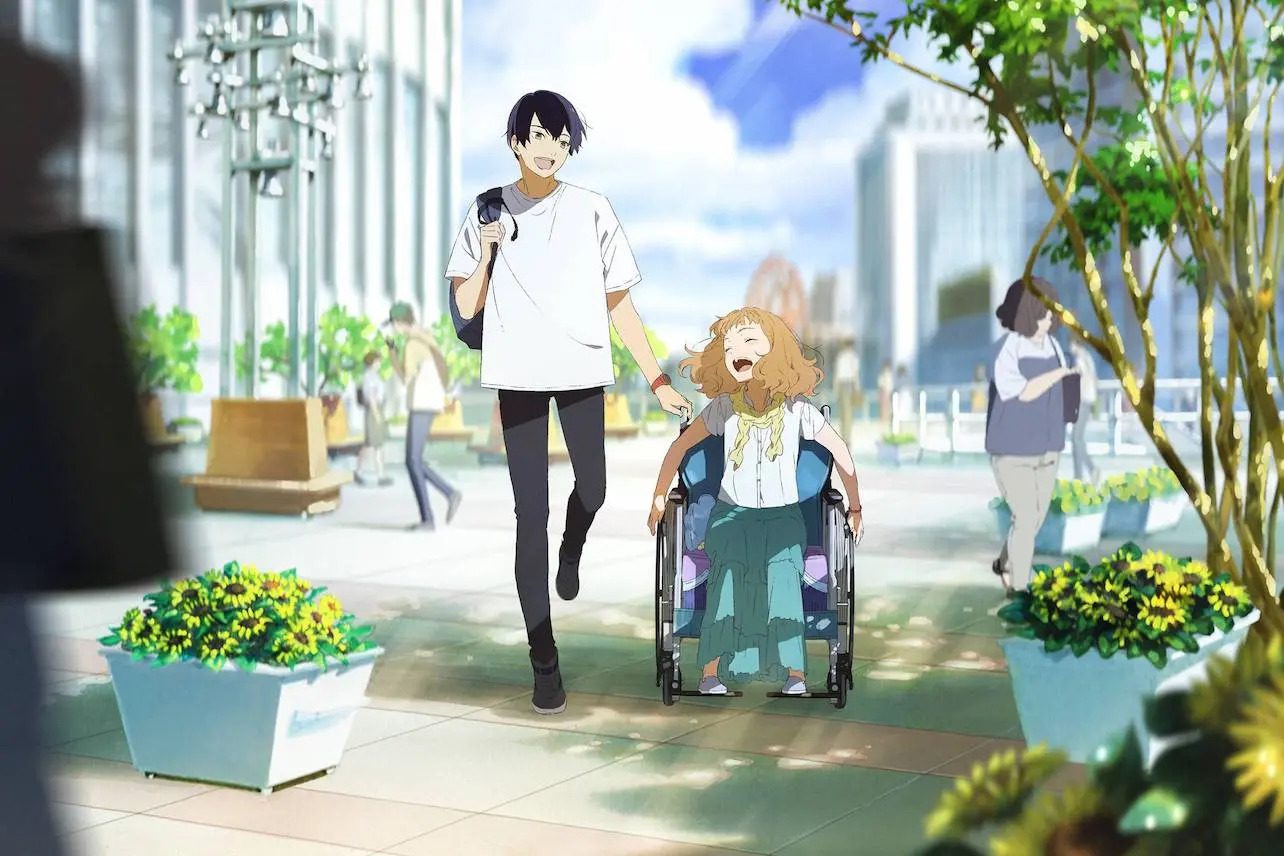 There is something heartwarming about Josee, the Tiger, and the Fish, which stars a student studying marine biology and a paraplegic woman who hopes to overcome her fears. You’ll end up in tears whether you read the original story, watch the film, or read the manga. This emotional story about love, injury, and conquering your demons will start serializing in August 2022.

Akumi Agitogi’s first novel, My Happy Marriage, originally released as a light novel series in Japan, was inspired by Cinderella, but with a paranormal twist set in Taisho-era Japan. A daughter is sent to audition as a bridal candidate for the heir of one of the world’s most powerful families… Because she failed to inherit the superhuman powers of her bloodlines, Miyo Saimori lives her days unwanted and unloved. Much like her stepmother, her father has little time or affection for her, and her half-sister is treated as a servant by her mother who, unlike Miyo, possesses the unusual abilities of their bloodlines. 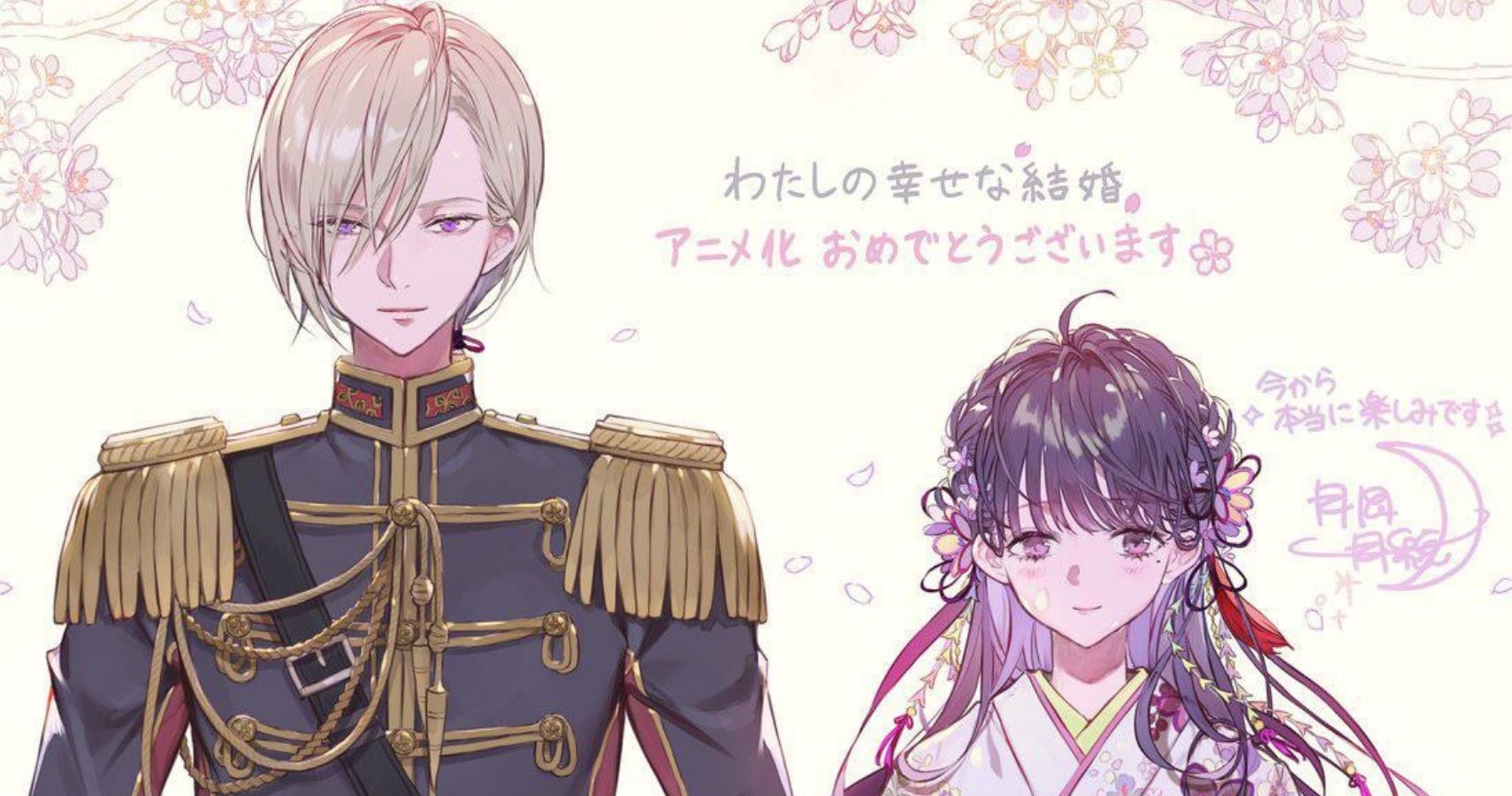 As nothing more than a nuisance and drain on family wealth, Miyo is sent to the Kudo house to marry its heir, Kiyoka Kudo. Whispers abound about the Kudo clan, the most powerful in all of Japan, but will the allegedly cold, cruel house where Miyo is moving prove much warmer than her home? My Happy Marriage 01 (Manga) is available on amazon on 13 September 2022. 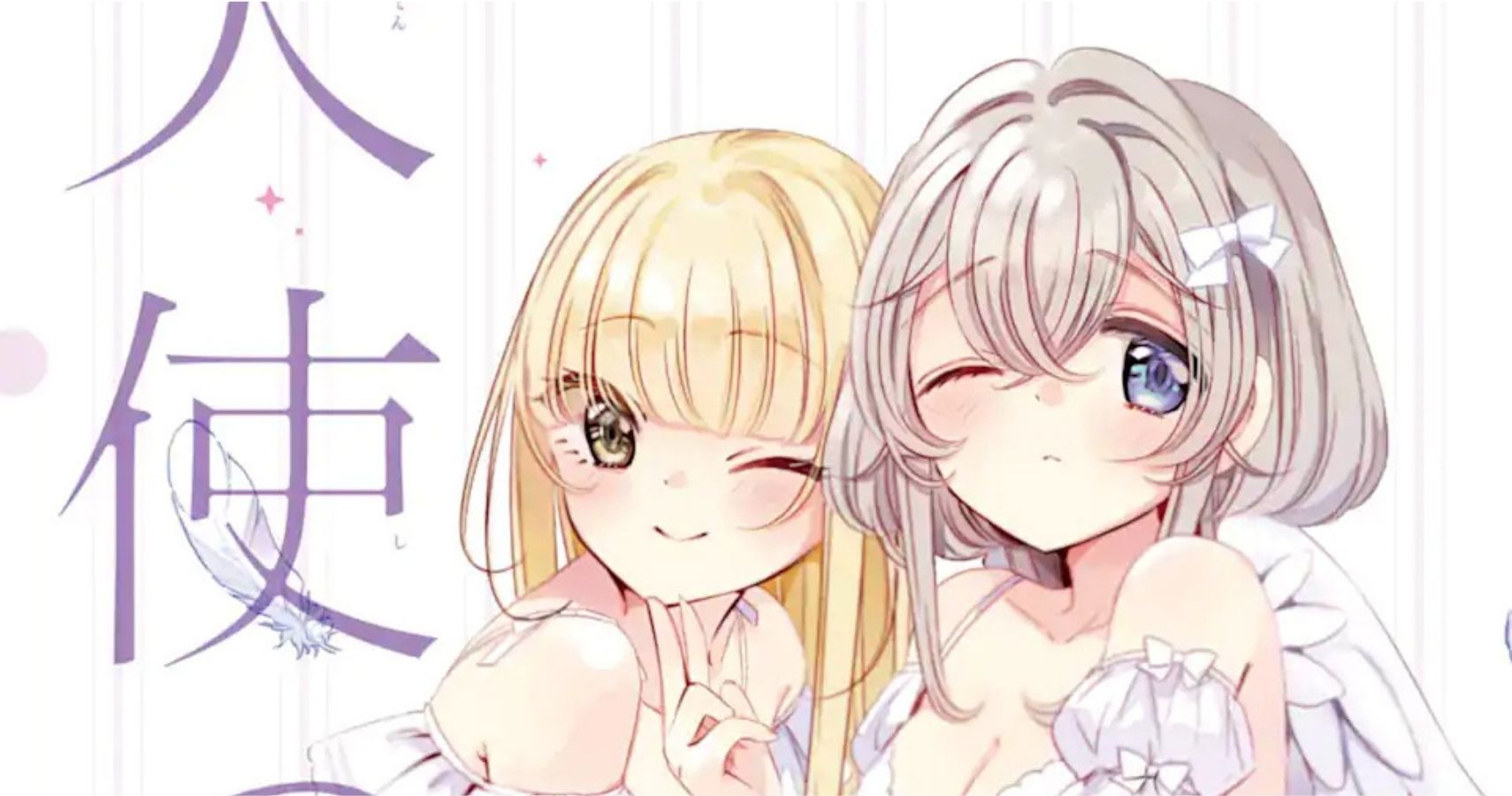 In Sweet and Endearing Romantic Comedy, Shintaro and Towa’s sweet and endearing romance begins when Shintaro encounters the mysterious girl, Towa, on his balcony. Far from being a random stranger, Towa is an angel. The Studio Apartment, Good Lighting, Angel Included Magna available from 5 July 2022 on Amazon and give you a taste of heaven.

Despite being a granddaughter of Osaka’s mafia boss, Yoshino hasn’t been able to attract a boyfriend despite having a reputation to uphold. That all changes when her grandfather arranges a marriage for her with the grandson of another yakuza… but Yoshino’s new partner isn’t just a gangster, he’s also a masochist. Can their strange relationship find happiness? 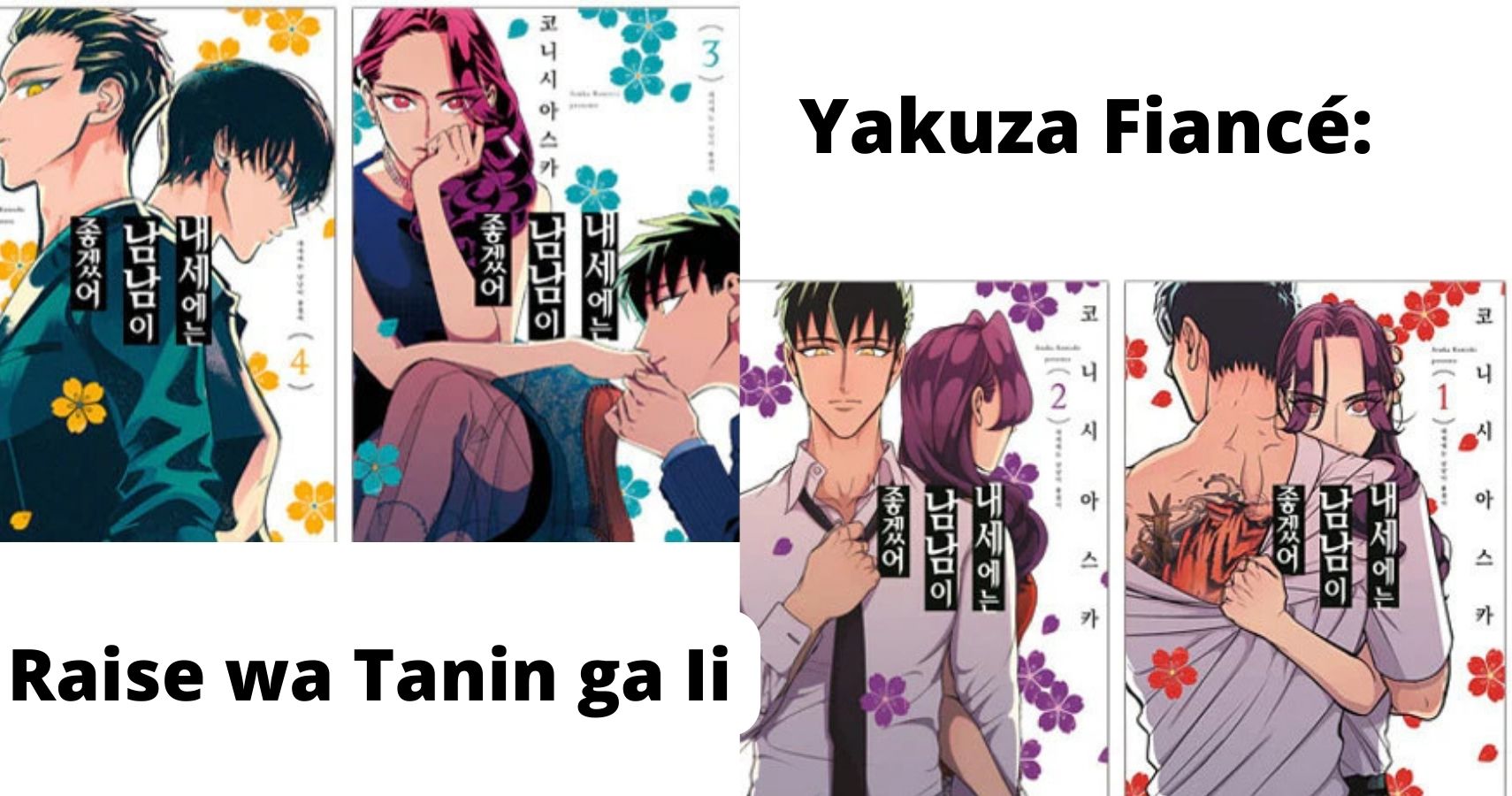 There are a lot of positive reviews for Yakuza Fiancé: Raise wa Tanin ga Ii, a manga that provides a look at the real world of Japan’s yakuza, without over-emphasizing certain elements. This is much more complex than the typical romance manga we recommend, but a great read for mature readers. November 2022 will see the release of Yakuza Fiancé: Raise wa Tanin ga Ii at all good bookstores and on Amazon.

1. Hunting in Another World With My Elf Wife

This rom-com adventure between a Hokkaido hunter and a gorgeous elf takes place in a world with beautiful elves and some pretty vicious wildlife. Shin Nakajima begins his new life along with Saran, who shares his similar interest in nature, hunting, and adventure. 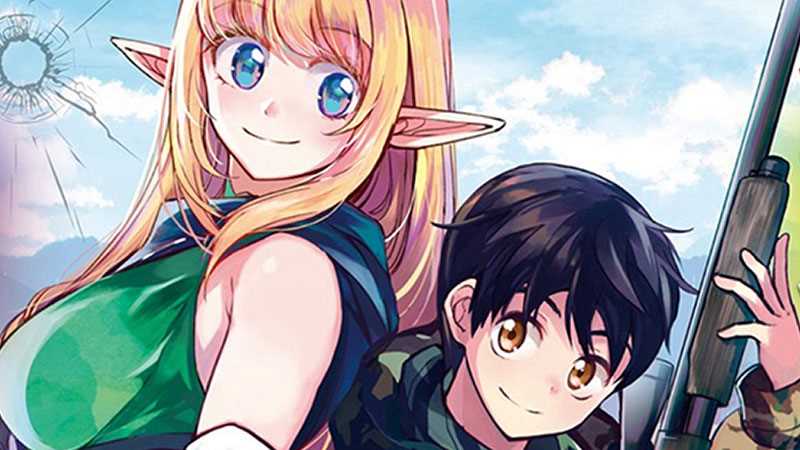 Hunting in Another World With My Elf Wife

Also Read: Top Comedy Manga You Should Not Miss!