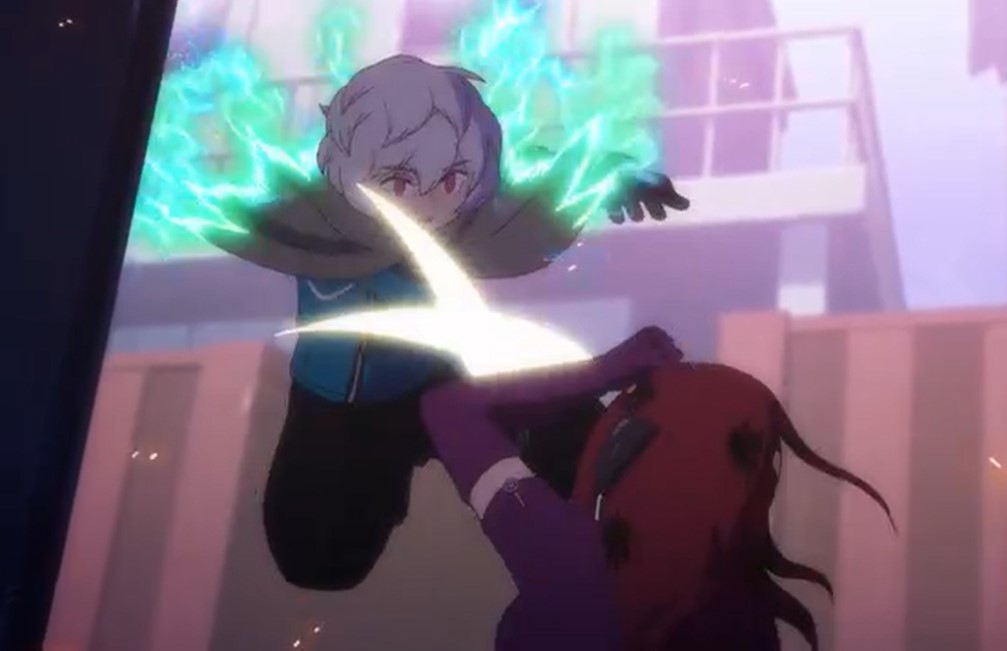 The battle between squads continues in World Trigger Season 2. Tamakoma-2 is the main target by all squads since they possess a threat and might win the battle. It has been revealed that the Neighbors might have captured Chika’s family or friend. Koga has caught Kakazaki off guard and stabs his stomach. Kakazaki smiles that he knows the Kuga is powerful. But he unleashes his Trigger and fires some shots at Kuga, who got sent flying.

Kakazaki comments that he did not come here to lose. Kuga lands on the ground, and it has been reported that the Trion body limit exceeded. Captain Kakazaki Bail-out and Chika comment that Kakazaki was planning to take Kuga with him. The commentator reveals that Kuga guarded his heart but got deeply wounded. Kuga may Bail-out due to Trion leakage. Kuga surprised them by bandaging his wound with a Scorpion.

World Trigger Season 2 Episode 8 will release on Sunday, 14 February 2021, at 1:30 AM on Crunchyroll. Let’s see what Osamu is planing with Kuga below.

Ever since Kuga uses Scorpion to bandage his wound, it has been revealed that it is a quick-fix to stop Trion leakage. The commentators are excited that the Scorpion can be used to do that. Captain Kakazaki was smart to switch tactics and aim for a mutual kill. But Kuga was a step ahead of Kakazaki, and he has lost a good deal of Trion.

If Kuga takes any more damage, he will drop out, and Agent Kuga is now free to move. The commentators are wondering who he will choose to support between Osamu and Chika. They also reveal that Agent Tayeru has lost her team and what she will do. Kakazaki’s unit has been wiped out, and only Teyaru is left; this will be a Showdown. Teyaru realizes that Chika is still the most isolated, and she decided to get Chika before Kuga arrives. 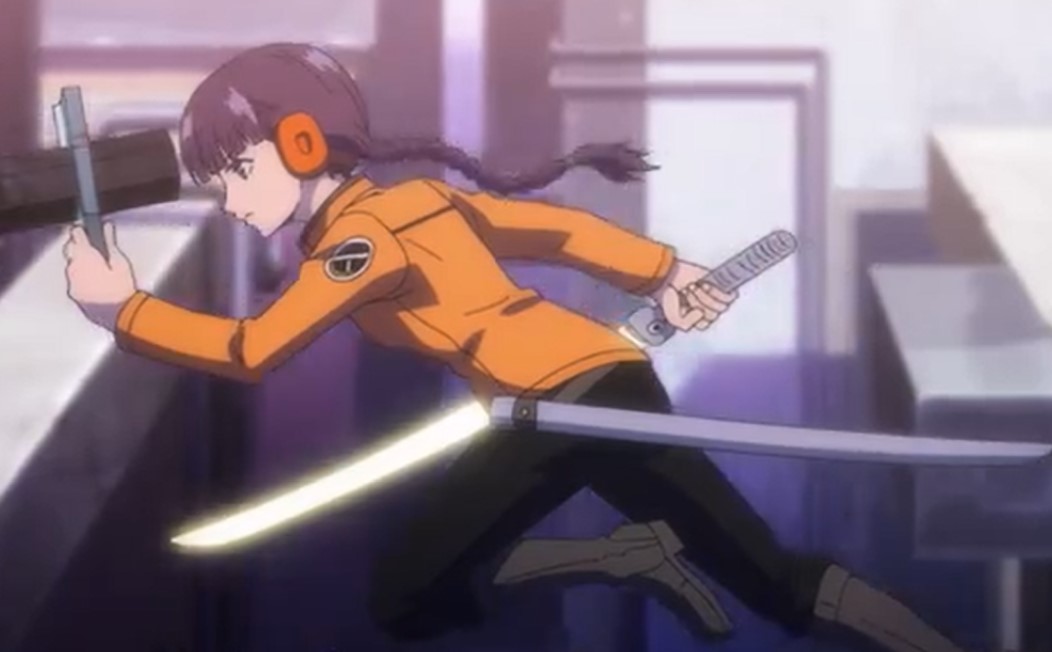 Katori squad realizes that Kakazaki has been taken down. They decided to take down Osamu before Kuga show up. Katori notices that Osamu is on guard and asks Rokuro to do something about him. She comments that Rokuro is ranked higher than Osamu. Katori teases Rokuro that he keeps on bossing her around and but now he cannot do anything. She also told him that Teyaru is after the Sniper, but she cannot snipe them for now. Hana told Katori’s squad that they can take down Osamu now.

She orders Yoka and Rokuro to get behind Osamu in a half-stealth mode. That is when the two will be behind him, and Katori will be in front of him. Hana said Tamakoma-2 tricks are unknown. So they must not forget to avoid their wires, and Yoko must draw Osamu’s attention. They both move to attack Osamu while Teyaru dodges the bullets coming from Chika. Teyaru hides nearby and realizes that approaching makes sniping accurate.

Teyaru thinks that if she doges one more shot, she will finish Chika. Shiori warns Osamu that the enemies are using Chamelion and Bagworm to confuse them. Osamu replies that he will counter them. They started firing some shots, but he uses his shield to block their bullets. Katori told Osamu that she knows that his squad wants to get in the Away squad. She also said she knows that their brother or friend was kidnaped.

The commentators notice that Katori is saying something, but they cannot hear. Katori asks if Osamu thinks he can make A-Rank that easily. She reminds Osamu that Ninomiya Squad crushed his squad. Katori reveals that her dream will become true because it is for the sake of loved ones. Osamu replies that he doesn’t understand what she’s saying, but he is aiming for the Away-Squad. Yoka and Rakuro attack Osamu from behind. 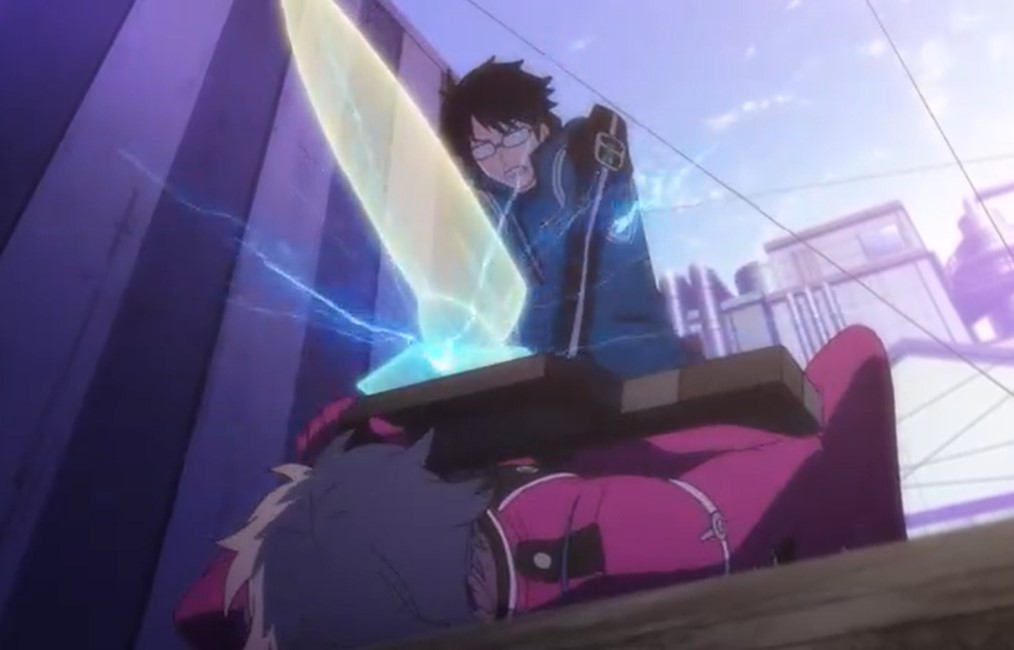 Osamu uses red wire and cubes to hold the back, but Yoka manages to cut one wire. Rakuro got tricked, and Osamu activates Thruster. Rakuro blocks the attack using his Trigger. But Osamu unleashes Asteroid Planted Bullets, and when the two wanted to save Rokuro, Kuga arrives. Katori notices that Kuga is injured, and only one powerful blow can take him down. She realizes that he can Bail-out soon if he drops out from Trion leakage.

Kuga didn’t waste time; he takes out Yoka and Rokuro in no time with the help of Osamu. The wire zone still worked in Kuga’s favor, and he cuts Katori’s hand that was carrying a gun. Thecommntaor said that their combat ended in a flash, two Bail-outs from Katori Squad. Katori is surprised looking at the strong pair in front of her. She thought that they were outnumbered and out planned. But her squad fall on Tamakoma-2’s trap.

Captain Katori is now cornered, and Osamu’s squad scored 4 points. Han confesses to Katori that her tactics was wrong. Katori decided to take the two down with her. She looks at them and comments to herself that this guy thinks that they are the center of the world. She started to fire rapidly, and the two are waiting for her Trion to run out. Shooting like that will also damage Katori and commentators said Tamakoma’s combat style is solid.

Meanwhile, Teyaru moves towards Chika, who is waiting for her to jump and take her down. Chiki captured Tayeru using Hound with Leads Bullets, but Tayeru takes Chika out and Bail-out. She made a wise move since Tamakoma would have taken her down. The battle between the trio still continues.