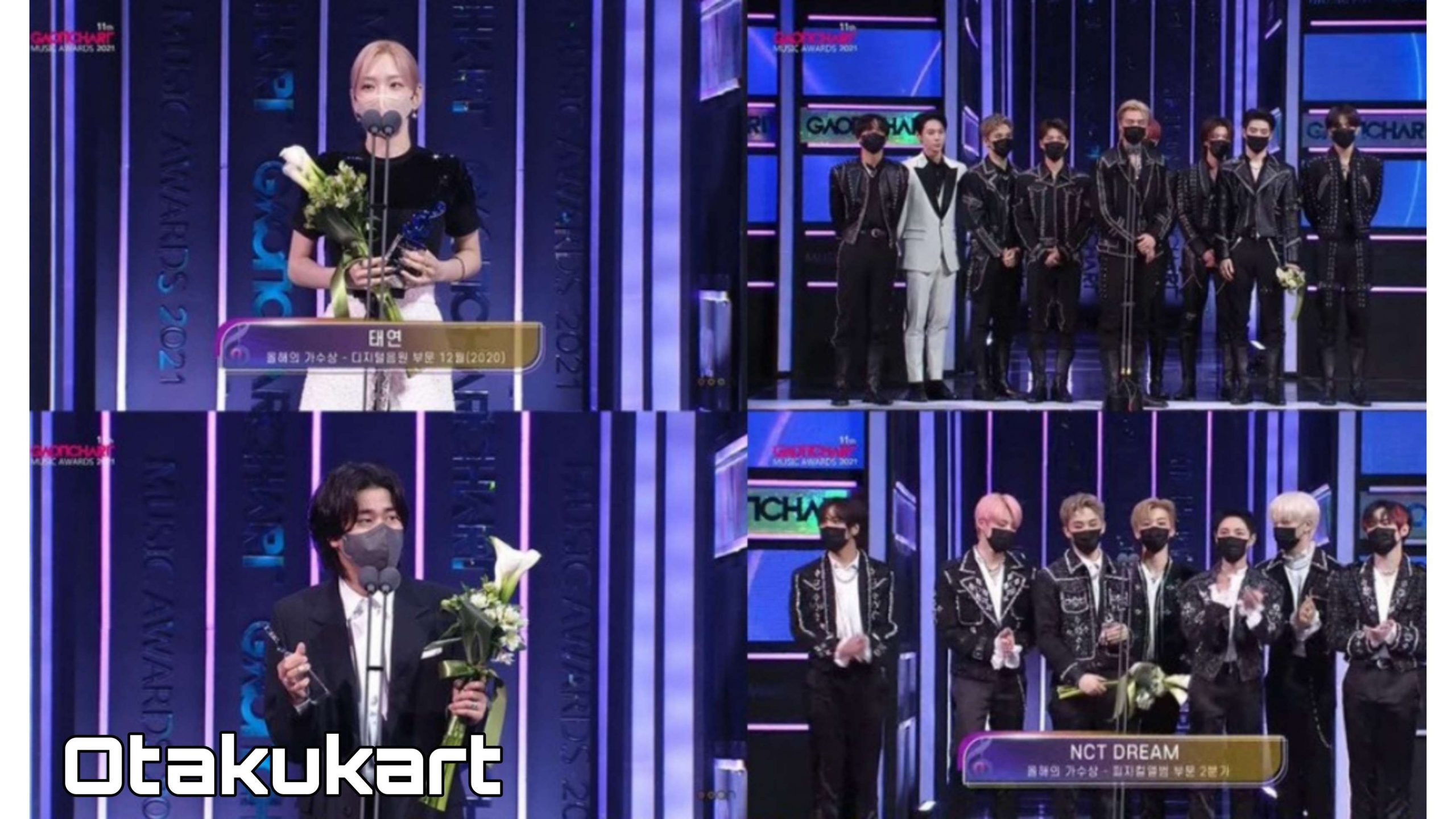 The Gaon Chart Music Award show is one of the major music award ceremonies held annually by the Korea Music Content Association. The very first Gaon Chart Music Awards was held in 2011 and this year, it marked the eleven milestones. The awards are presented based on the commercial performance of the tracks and albums recorded by South Korean music artists on the basis of the Gaon Music Chart, which is one of the most renowned music record charts in the country. The Gaon Chart Music Awards is known for celebrating some of the best Korean music that has ended up topping the charts of the Gaon Music Chart. This year as well, the music record chart has awarded music gems that had been released between the first day of December 2020 to the last day of November 2021.

This year, the global K-pop sensation, BTS, and the nation’s sweetheart, IU earned a total of eight nominations at the Gaon Chart Music Awards 2022 which is the highest number for the night! While IU bagged home five trophies in major categories, BTS won all eight and proved once again why they are unbeatable! Even last year, the K-pop artist that won the most number of awards, six if we are being precise, was BTS followed by Blackpink and IU who had received four and three awards respectively.

The 11th Gaon Chart Music Award show was held on January 27, 2022, at Jamsil Arena in Seoul, South Korea. For the last seven years, the award show has been conducted in Jamsil Arena except for the 10th Gaon Chart Music Awards (2021). Last year, the award ceremony couldn’t be conducted physically owing to the ongoing Covid-19 pandemic and was held via virtual live stream from the studio with Leeteuk, Jaejae, Lia, and Joo Young-hoon as the show’s MCs. Naturally, there wasn’t any on-site audience or live performances by any artist.

This year, the award ceremony was supposed to be hosted by STAYC’s Sieun and Super Junior’s Eunhyuk. However, a few days before the event, Eunhyuk was tested positive for Covid-19 and had to be replaced by JaeJae and NCT’s Doyoung who joined Sieun as MCs. The entire award ceremony has been broadcasted live on Mnet for domestic viewers and V Live for international viewers. The awards were presented by several well-known personalities of the Korean entertainment industry including Tiffany Young, Jung Ji-so, Hani, Kim Jae-young, Go Eun-ah, Kangta who handed over the Artist of the Year Awards (both Digital and Physical).

This year the performance lineup had been exceptionally good with some of the most popular K-pop artists setting the stage on fire! The list of artists performing on the award night was revealed on January 11, 2022, and despite the lack of JYP and HYBE artists, fans were looking forward to watching the performances of idols of SM Entertainment. The night was officially opened with the powerful performance of Lee Mu-jin on tracks— ‘The Assignment Song’ and ‘Traffic Light’ followed by the performance of the boy group, STAYC on ‘Stereotype’ and ‘ASAP’. While the K-pop group Homies performed on ‘Siren,’ Brave Girls delivered an eye-catching show on their hit singles, ‘Chi Mat Ba Ram’ and + ‘Rollin’.

Not to mention the incredible performance of popular K-pop groups like Red Velvet who performed on Queendom, NCT Dream who performed on ‘Hot Sauce’ and Hello Future, and NCT 127 who concluded the ceremony with performances on ‘Favourite (Vampire)’ and ‘Sticker’. Standing Egg and Lim Young-woong were also a part of this glam-studded lineup who delivered incredible performances on ‘Old Song’ and ‘Love Always Run Away’ and ‘My Starry Love’ respectively along with SNSD’s Taeyeon, and SHINee’s Minho.

Read: Top 10 Fourth-generation K-pop Groups with the Most Number of Music Show Awards

Taeyeon from Girls’ Generation earned the Artist of the Year for December 2020 for the track, ‘What Do I Call You’

IU won the Artist of the Year for January 2021 for the debut single, ‘Celebrity’ from her latest album ‘Lilac’.

Artist of the Year for February 2021 is SHINee for the title track of the album, ‘Don’t Call Me’.

Another month and another win for IU who won the Artist of the Year award for March for the title track of ‘Lilac’.

Kang Daniel’s song ‘Antidote’ from his fourth extended play, ‘Yellow’ won the award for Artist of the Year for the month of April.

BTS’ second English language single, ‘Butter’ dominated the Gaon charts in May 2021 and ended up winning the award for the same.

Artist of the Year award for June 2021 was earned by Brave Girls’ ‘Chi Mat Ba Ram’ from their fifth extended play, ‘Summer Queen’.

With the single, ‘Permission to Dance,’ BTS won the Artist of the Year award for July.

Red Velvet won the Artist of the Year award for August for the track ‘Queendom,’ recorded for their sixth EP going by the same name.

This marks the third win of BTS under the Artist of the Year Digital category for ‘My Universe,’ which is a collaboration between BTS and Coldplay.

IU’s new single ‘Strawberry Moon’ dominated the Gaon charts in October and earned the Artist of the Year award for the same.

Fourth-generation girl group IZ*ONE earned the Artist Of The Year award for their fourth and final EP, ‘One-reeler/Act IV’ for the first quarter.

NCT Dream snagged the award for the second quarter with their first studio album, ‘Hot Sauce’.

BTS won the Artist Of The Year award at the 11th Gaon Chart Music Awards for their digital single, ‘Butter’.

Retail Album of the Year: Butter by BTS

Music Steady Seller of the Year: BTS for Dynamite

Popular Singer of the Year: ‘Old Song’ by Standing Egg

Rookie of the Year:

Discovery of the Year (Hot Trend): ‘ASAP’ by STAYC

Record Production of the Year: LILAC by IU and EDAM Entertainment

International Song of the Year: ‘Peaches’ by Justin Bieber

Lyricist of the Year: IU

Composer of the Year: Ryan Jhun

Discovery of the Year (Hip Hop): ’Siren’ by Homies

Performer of the Year:

Hot Performance of the Year: THE BOYZ, Oh My Girl

To date, South Korean boy group EXO has won the most number of Artist of the Year awards (physical) which is ten in number followed by BTS with nine awards and Super Junior with five. The highest number of Artist of the Year award under the digital category has been earned by IU ( eleven in number) closely followed by BIGBANG (nine), Twice (seven), BTS (six), and BLACKPINK (five).