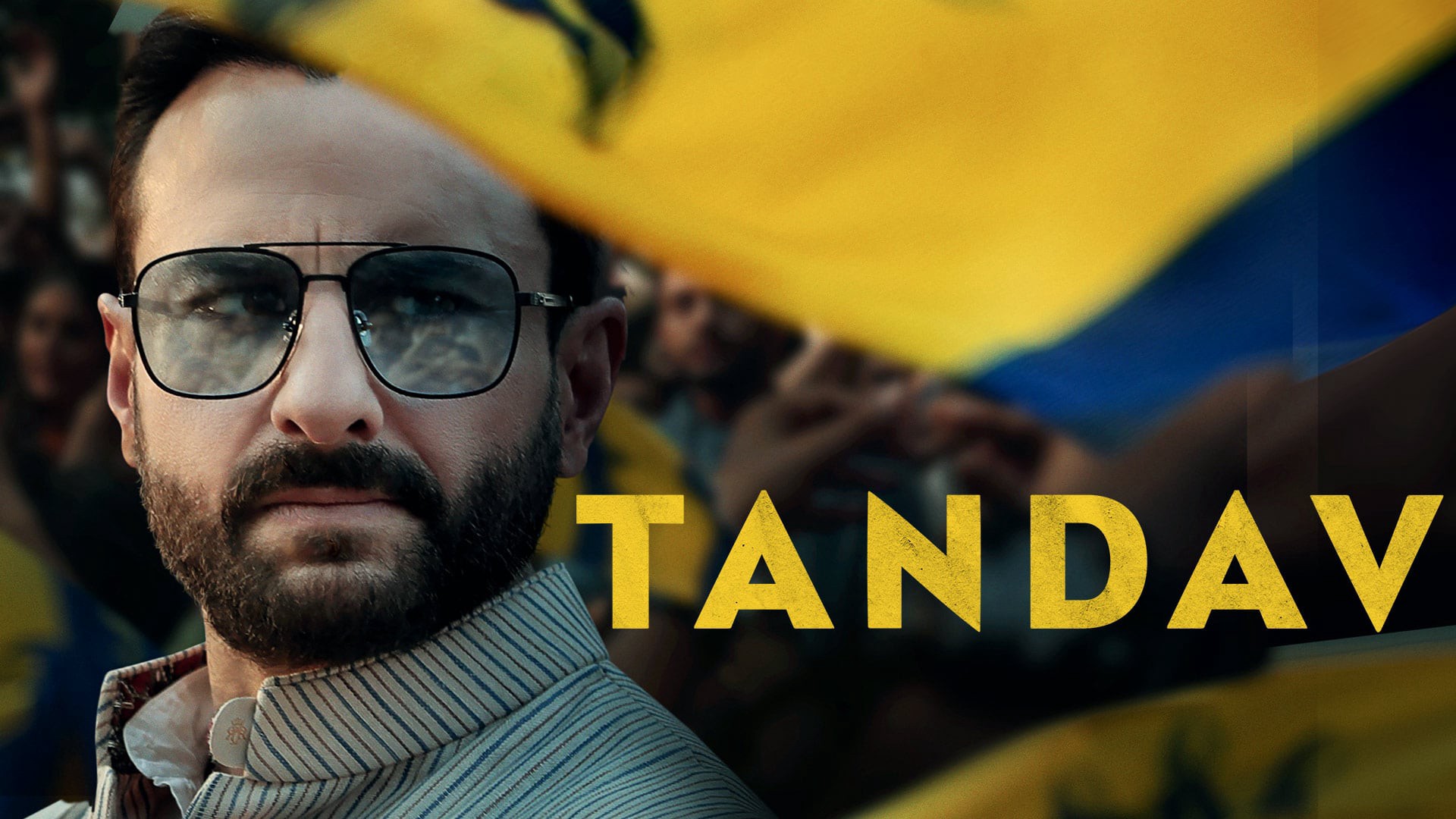 Tandav, the highly anticipated web series, has finally come out and has definitely been successful in creating a buzz. The show is an Indian Hindi Political Drama that takes us through the depths of Indian politics. And shows its dark side as to how one’s ambitions to reach the top drives the entire government’s structure. Tandav is a story in the capital city of the world’s largest democracy, India – New Delhi. The story depicts the closed chaotic doors of power and manipulation as it uncovers the darkest lanes of Indian politics.

Although being a fictional plot, it is driven by two different narratives which in some way or another, define the country’s conditions. And as it is portrayed, the show tries to shed some light upon them. Gaurav Solanki and Ali Abbas Zafar write the story while it’s directed by the latter. Tandav has started streaming on Amazon Prime Video from 15 January 2021. 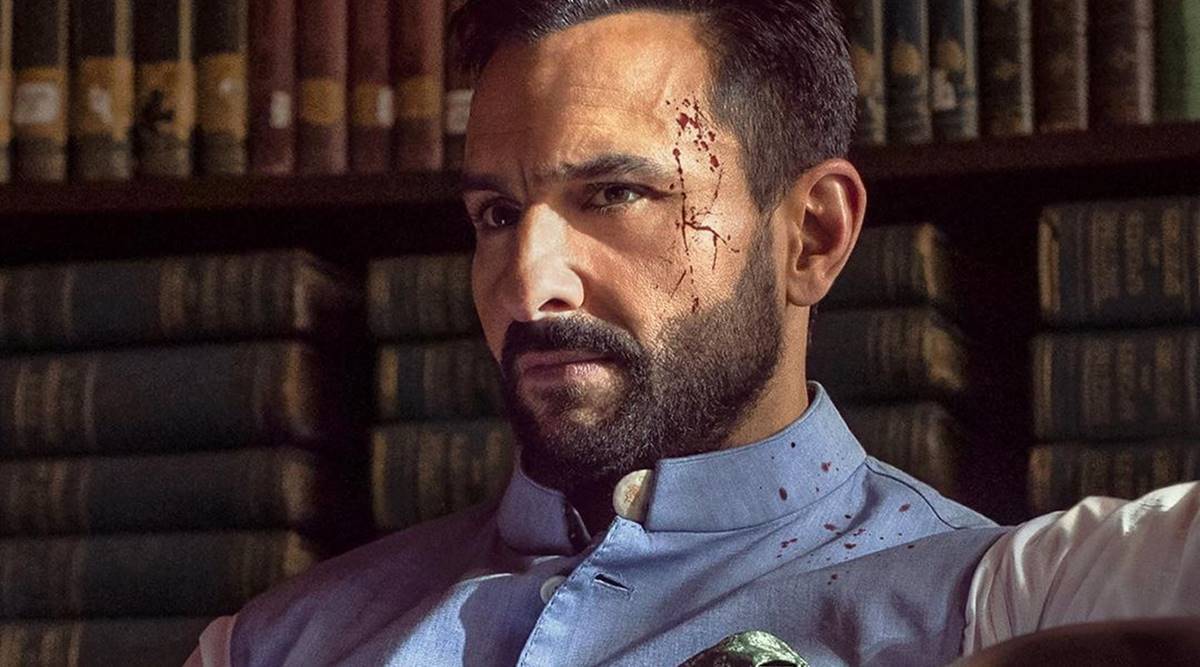 The show truly curtails a heavy star cast. The show’s main star is Saif Ali Khan, as he dons the role of an astute and shrewd politician, Samar Pratap Singh. His ambition drives Samar as he desires to be the next Prime Minister. Sarah Jane Dias plays the role of his wife, Ayesha Pratap Singh. Tigmanshu Pratap plays a dazzling role of an all-powerful patriarch Prime Minister, Devki Nandan Singh. He is Samar’s father and the concurrent Prime Minister for three terms. Dimple Kapadia, who recently had a role in Christopher Nolan’s Tenet, dawns Anuradha Kishore’s character. She was what one would say, “a close associate to the Prime Minister.” Kumud Mishra takes on the role of Gopal Das Munshi, one of the party’s leaders. And is successful in his role as a shrewd politician.

Sunil Grover, known for his comedy, has a change in character as he plays the role of Samar’s right-hand man, Gurpal Chauhan. And as much as he put on a convincing performance, his accent was something we could have definitely avoided. 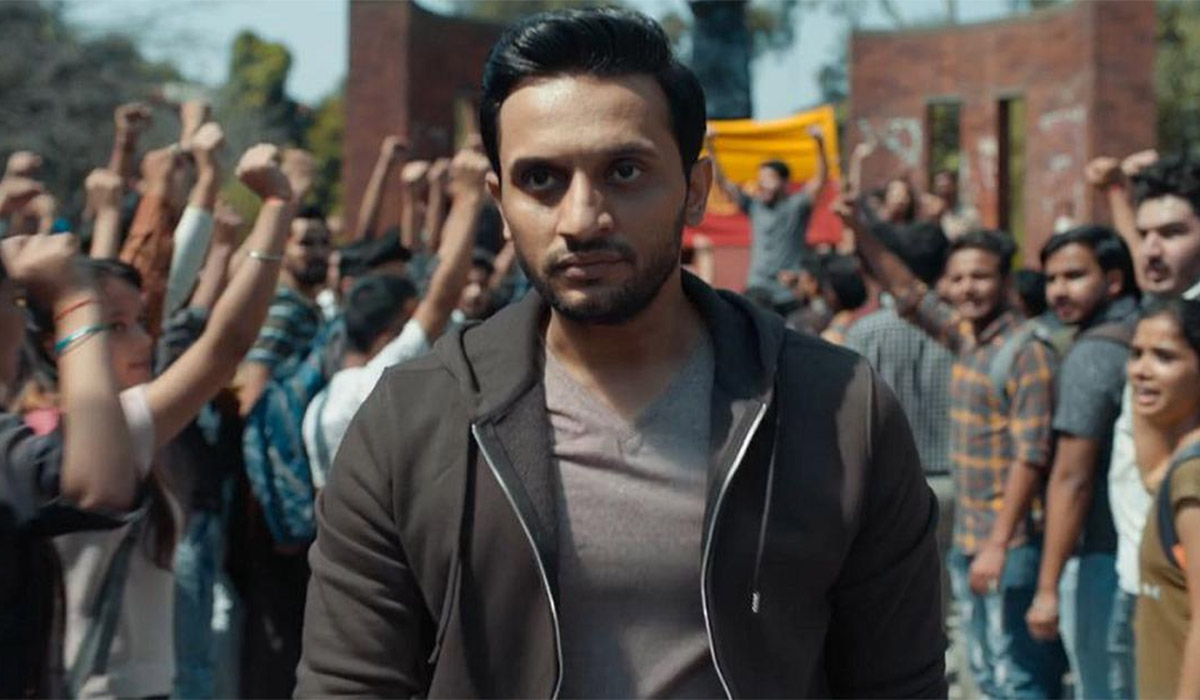 As the show has 2 narratives, the other narrative is starred by Mohammad Zeeshan Ayyub. He takes on the role of a student leader at Vivekananda National University. And as one could see, his role is deeply motivated by Kanhaiya Kumar’s life. Kritika Kamra plays the role of Sana Mir while Dino Morea plays the role of Professor Jigar Sampath, a friend to Samar. Anup Soni, who was in Crime Patrol for nine years, plays the role of Kailash Kumar. As you can tell, the cast of Tandav is truly a heavy one, thus creating a lot of pressure for its success.

Tandav is truly a political drama as it tries and showcases the country’s various political strands through two narratives. These two divided narratives are those of government politics and student politics. At the heart of the show, we have Saif Ali Khan as Samar Pratap Singh, an up and coming politician. Meanwhile, we even see Mohammed Zeeshan Ayyub as a student activist, Shiva Shekar, at Vivekananda National University. He does not view himself as a politician but instead as an activist to protest against the nation’s social evils.

From the very beginning, we sense a strain in the story as we follow Samar Pratap Singh, an up and coming politician, and a JLD Party member. He dreams of being the Prime Minister by overtaking his father’s throne. His father, Devki Nandan Singh, is the current prime minister about to be elected for a 3rd term. The father and son bond is strained even further as Devki and Samar view different people appropriate for the Defense Minister position. Devki plan on giving it to Raghu, the son of his confidante and close associate of 30 years, Anuradha Kishore. While Samar feels the position should be given to Aditi Mishra, a female Air Force pilot. We even meet the other high leaders of the party, such as Kumud Mishra’s Gopal Das Munshi. He himself has never been the Prime Minister and dreams of being one. 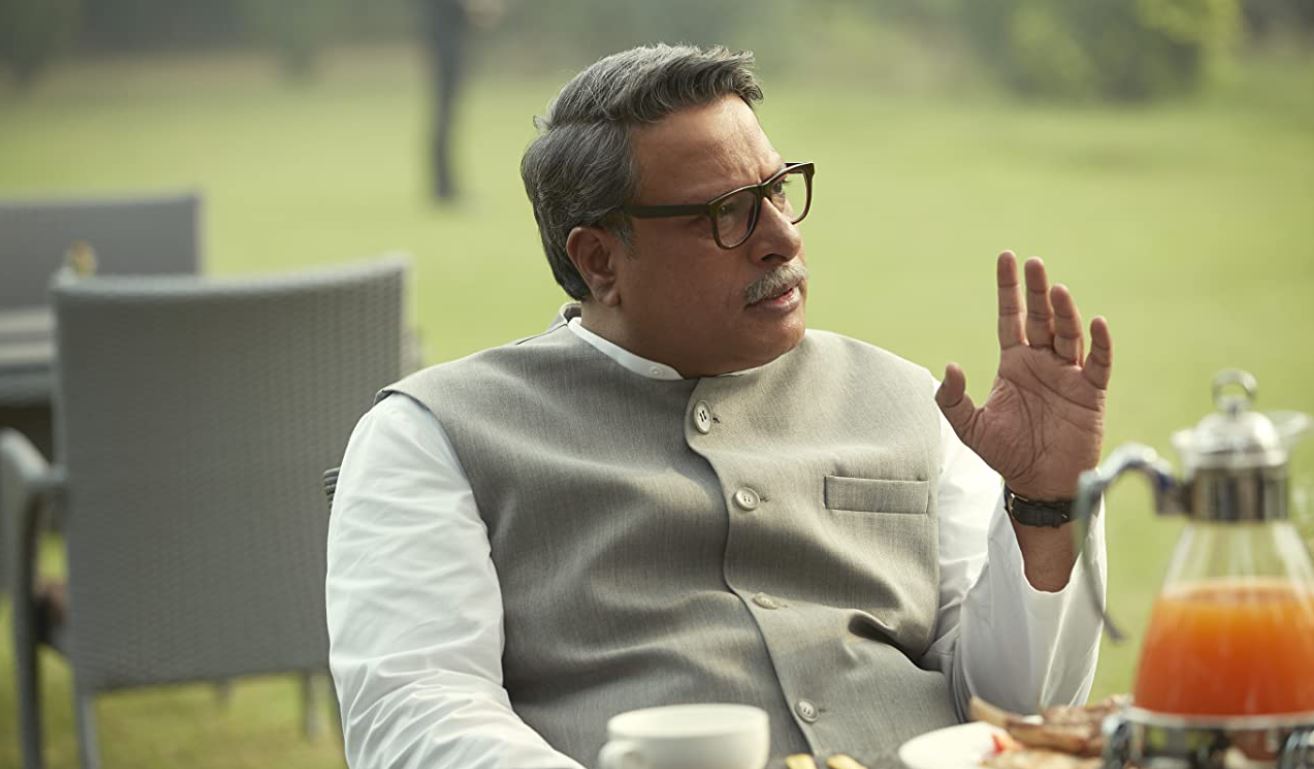 Devki Nandan and Gopal Das both feel that Samar would not be a good Prime Minister. They feel that he will be something of a dictator and destroy the nation dividing it into two. Their suspicions become quite true as driven by his ambition Samar conspires against his father. He gives his father, Devki, a glass of wine poisoned at night – laced with Aconite. As he dies, Devki calls out to Anuradha, but she is unable to reach him. From the end of the first episode, we get a sense of the plot, as Samar tries to claim what he thinks is rightfully his. But, that isn’t it as the plot further thickens.

The next day, Samar and his wife, Ayesha, clean up Devki’s office to stage a heart attack. The weird thing here is that no one actually investigated his death. But, this news spread like wildfire. Samar feels that he is soon about to be named the next Prime Minister. And prepares for Devki’s funeral while talking to the JLD party members to support him in his cause. However, he is not a smooth transition to power as he thinks he will. We can witness the Indian political dynamics as the situation becomes increasingly hostile where the ends justify the means. 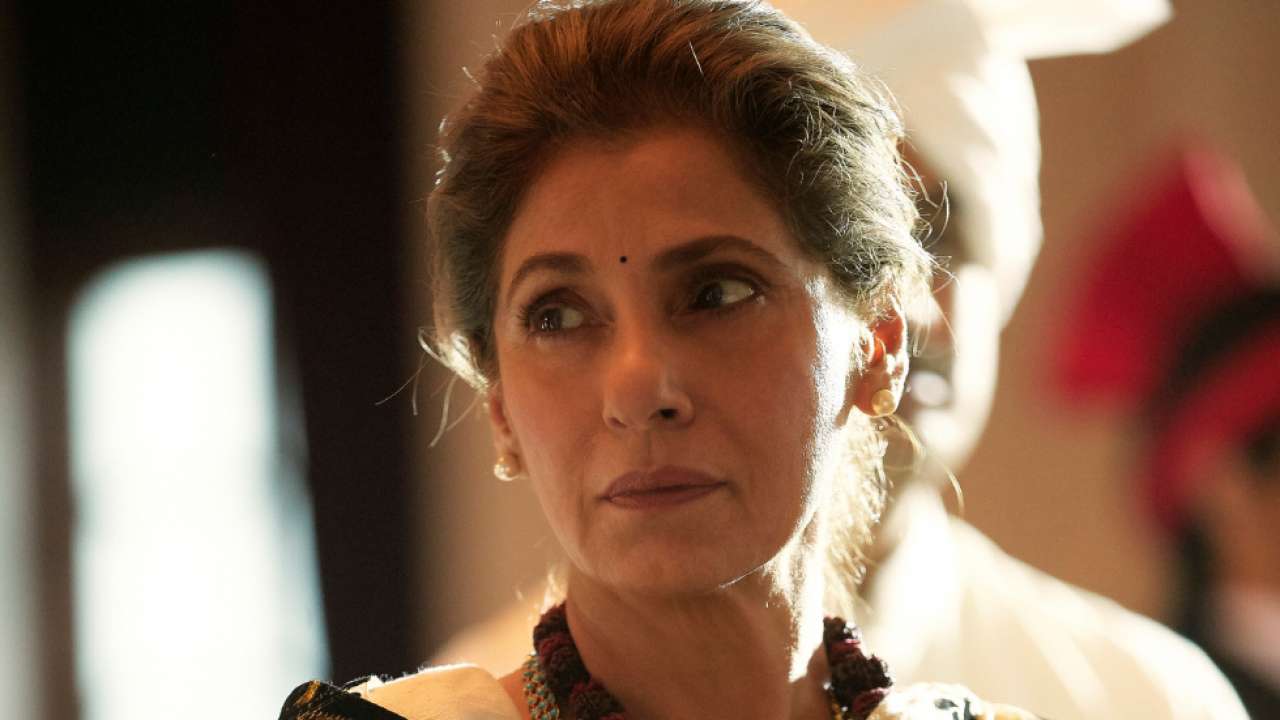 As he faces competition in the form of Devki’s right-hand man, Gopal Das. He asks for Samar to support him for the role of the new Prime Minister. Samar pretends that he’ll think about it but later spreads a rumor through the news. He is successful as Gopal Das was being shamed in the public’s eyes as someone who started campaigning for Prime Minister almost immediately after Devki’s death. Later, to save his reputation, he announces to the media. As he claims, he has no plans on running for Prime Minister. Thinking that he had the position of Prime Minister at his fingertips, he cremates Devki. That’s when Anuradha tells him that he’ll support her for becoming Prime Minister as she knew that Samar killed Devki with Aconite.

Parallel to this story was hopeful and sincere Shiva Shekar, Sana Mir, and their friends. They were the fictional Vivekananda National University students near Malakpur, which was obviously based on Jawaharlal National University. And as we see further, we realize that he is based on Kanhaiya Kumar’s life during the JNU sedition row in 2016. 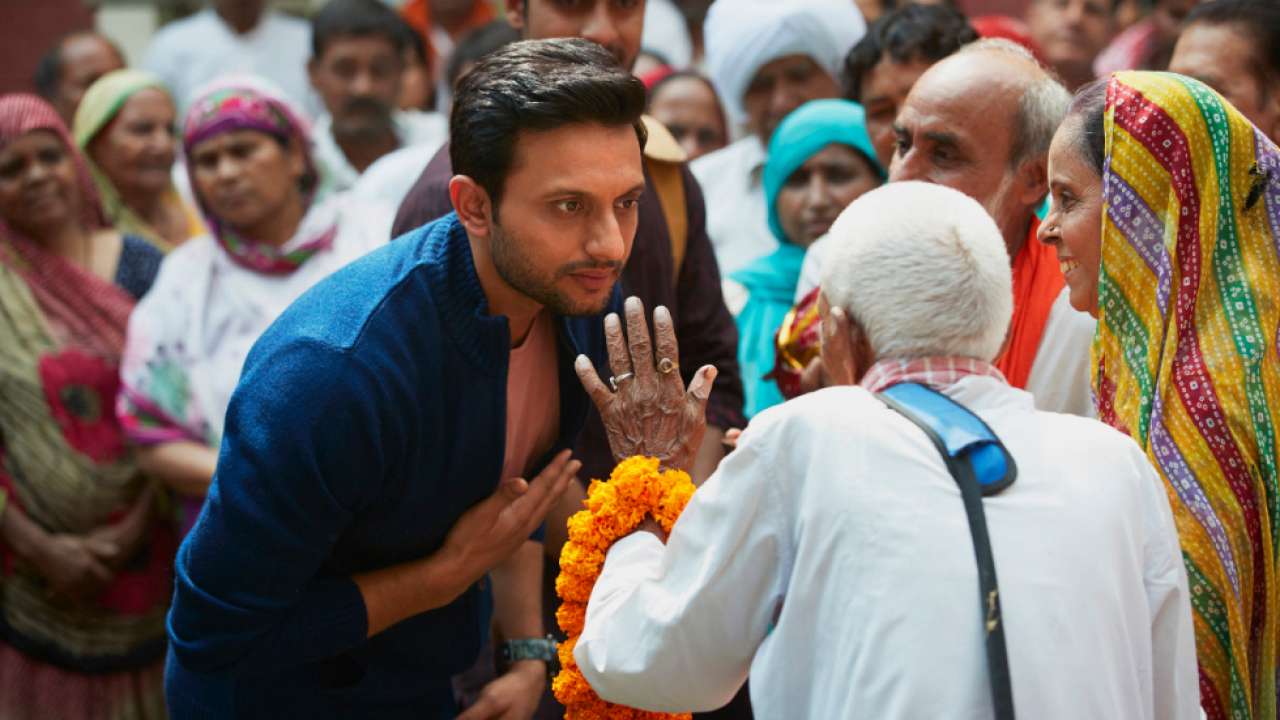 As the farmers are protesting against a factory and highway being built in the farmland. Being an activist, Shiva fights for their rights and demands Azaadi (freedom) from social evils. During the protests, police start shooting, killing two people, after which Shiva’s friend, Imran, is arrested. Shiva and his friends try bailing him out but instead get rejected and beaten up by officials. The police threatened the VNU students with a report that stated that they beat up three Police officers instead. Shiva, who is worried that the media will tie Imran’s name to a terrorist organization, visits him. Later, he creates a fake video of the Police’s attack on the protestors. This causes an uproar of Malakpur protests, which starts trending on social media.

Unknown to him, Samar schemes to lure Shiva to bring him in and use him as his ‘Chandragupta.’ As he believes, he could control the influential student population. And for this, he assigns his henchman Gurpal Chauhan who follows his orders, no matter what those might be.

What is the Controversy surrounding it? 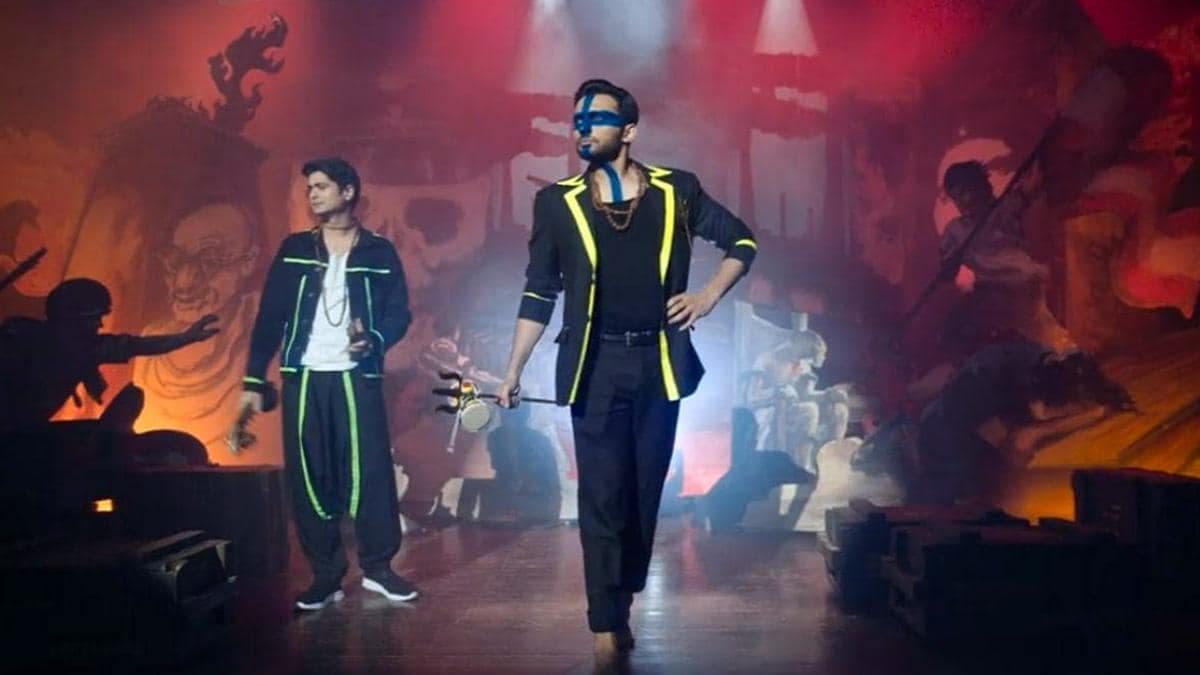 Zeeshan Ayyub playing Shiva is in a stage play.

“Tandav” has been in quite the public eye after its release. The show has been trending on social media not just for its story but for controversies surrounding it. There are two scenes in the show which caused an uproar. Primarily, it revolves around the scene where Zeeshan Ayyub playing Shiva is in a stage play. During his play, he portrays Lord Shiva and makes abusive jokes while also referring to Lord Rama. The other scene involves the farmer protests where the police encounter three Muslim boys. These scenes were found brutally offensive by portions of audiences as it hurt religious sentiments. An FIR has been filed against the cast and crew of “Tandav” in Lucknow, followed by various public protests against the show. It’s even was called for a ban by BJP based on hate speech against the Hindu community. 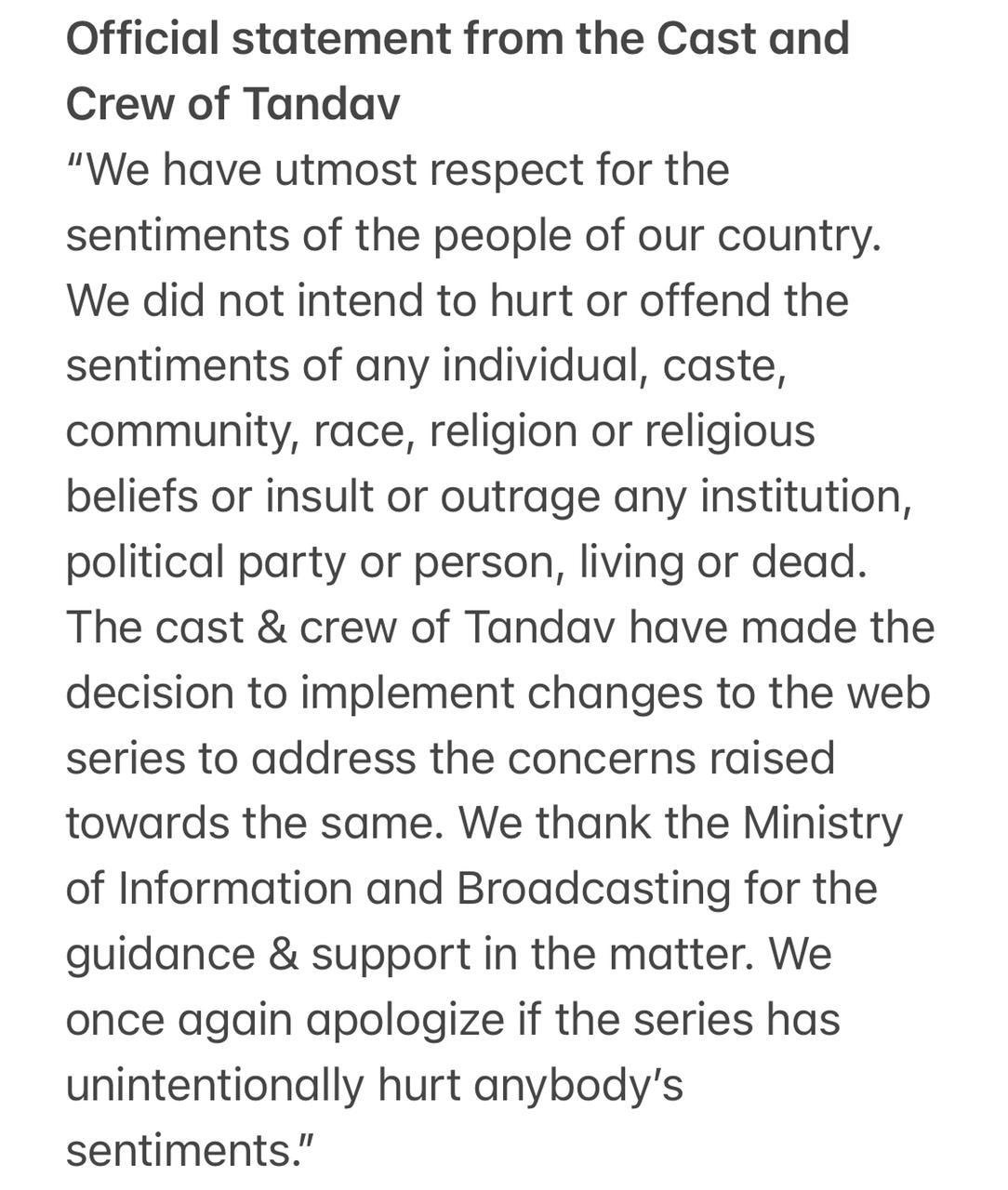 Following the uproar, the director Ali Abbas Zafar and the cast & crew have offered a sincere apology on behalf of the show. And have adhered to make changes in the web-series owing to the concerns raised by the Information and Broadcasting Ministry. This isn’t the first time a show has faced such an outburst. Previously seen in the case of “Paatal Lok,” it feels like Tandav tries to replicate it. These scenes necessarily do not contribute anything to the story and could have been easily avoided. And that’s why it feels like they were purposely put in to create a controversy. By creating such an outburst, the show receives publicity, which eventually leads to more viewers. And considering the nation’s current political climate, these scenes were bound to be nitpicked based on hurting religious sentiments.

Tandav, a very ambitious show that could have been a truly gripping political drama. It had the scope of showing us the dark alleyways of politics and why having power was so intoxicating. But instead, we are left with a storyline that was mediocre at best. The show is filled with loopholes as even after nine episodes; we are left with nothing to know about Ayesha, Gopal Das, and Anuradha. Considering the story was written by Gaurav Solanki, who was involved in Article 15 (2019). It feels like the director got involved with the script to make it entertaining but instead made it weak.

Certainly, the show is gripping enough to watch in a single sitting, but thereafter one could feel that the story is being dragged out. The show has a basic storyline, which was quite predictable but was too hyped by the trailer. There is quite a scope for improvement in the second season. As performances by actors and dialogue writing were one to look out for. All in all, Tandav is brave enough to start a new genre in India – Political drama, which is only ruined by its unreasonable attempt at sparking a controversy as it left the audience with a bad aftertaste.