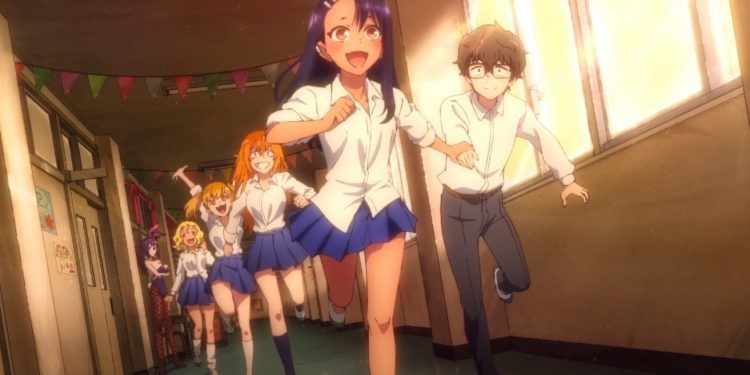 Don't Toy With Me, Miss Nagatoro

Don’t toy with me, and Miss Nagatoro San is an entertaining anime to watch. The anime will make you go from aww to hysteria in a matter of seconds in the anime. The plot has the absolute power to lighten your mood. The story of Don’t Toy with me Miss Nagatoro San goes around like, Naoto Hachiouji encounters Hayase Nagatoro. Naoto is a comic enthusiast and a total introvert. Nagatoro interrupts him by drawing comics. Nagatoro, a first-year student, teases him every day. She constantly harasses him about the way he is. Reading his story and seeing his nervous demeanor convinced him to play with her, even addressing her “Senpai” instead of calling himself.

At first, Nagatoro’s constant antics annoy and embarrass him, making him feel humiliated. They build a peculiar bond as they spend more time together, and Naoto discovers that living with Nagatoro may even be enjoyable. It’s safe to say, though, that his days are never going to be the same again. It’s a perfect one-time watch, but then you can still relive the moments that gave you a good laugh. This article contains a brief list of moments you would want to go back and watch again. There might be more moments or the whole anime, but these moments could be ranked as the most entertaining among all.

Nagatoro being a bully, made fun of Naoto’s modest plot of the comic he was drawing. One time, Nagatoro took the papers of Naoto where he had removed the comic. Where else, Naoto being introverted, was embarrassed about his art couldn’t even stop it. However, this did not stop Nagatoro from making fun of the poor lad. She read the whole story in front of him.

Naoto’s face turned entirely red, and he is urged to make her stop reading it. Since he is not confident enough for his artwork, the scene ends with Nagatoro teasing him as Senpai always and almost bursting into tears.

Like we all know, Nagatoro and Naoto have different tastes in addressing themselves from the beginning of the anime. Nagatoro has been addressing Naoto as Senpai from the very first episode. It started with Naoto returning home from school and Naoto popping up like usual and teasing him and calling him Senpai! Senpai! Senpai! repeatedly. Naoto doesn’t seem very happy about Nagatoro teasing him with sexual jokes.

Being a shy guy, Naoto has made it sure to stay away from people and girls in general. Nagatoro comes into his life out of nowhere, and he finds it uncomfortable when she mockingly says, “Want me to squeeze it again!”. However, the scene end with nothing much other than Naoto being embarrassed and Nagatoro enjoying his expressions.

When Naoto was painting alone, Nagatoro came into the drawing classroom only to observe him. Instead, she falls asleep and has a strange dream. So, if you haven’t noticed, Nagatoro dislikes anybody else taunting Naoto save her. Whether it is her close pals or others, she is highly concerned with defending Naoto from other bullies. She doesn’t like it when her pals attempt to get too close to Naoto or show too much interest in him.

Even though she won’t stop making fun of him at everything, she also shares a very different relationship with him other than that. She becomes possessive, which is another way of showing affection in their relationship. But with time, we see them becoming more evident with it than their usual way.

The scene surrounds Nagatoro taunting Naoto to be a sheep. She brings school a shaver with the intention of chopping down the hair of Nagatoro. Also, Naoto had his hair a bit grown-up than usual. However, when Nagatoro left the drawing-room to attend a call for some time, her friends arrived in the drawing-room to get some extra time and cut Naoto’s hair on behalf of Nagatoro.

However, just before her friends are about to cut his hair, Nagatoror arrives on time and saves Naoto from getting his hair ruined. She cuts Naoto’s hair just like a professional without wasting anything. Even Naoto is pretty impressed with the result. Though he couldn’t stop blushing, his cheeks went all red when he saw himself in the mirror.

We all know Naoto isn’t a very athletic person. When Nagatoro and his companions watched Naoto from above, they could see how hard he finished the race. Nagatoro felt compelled to assist him after seeing her companions’ mockery of him. As a result, when Naoto returned home from school with a sorrowful, worn expression, Nagatoro appeared and decided to begin his training.

Naoto was exhausted the following morning, but Nagatoro emerged in a full-fledged sports outfit. It was a form-fitting gown that accentuated her curves. Flushed with scarlet, Naoto began running as quickly as possible to avoid looking at her. However, later on, as they were stretching, one of their classmates passed by and caught them performing arches.

6. “The way we are washing hands next to each other kinda makes it seem like we are taking a bath together.”

Nagatoro is well-versed at making Naoto blush excessively. During one such incident, both of them were in school. While Naoto was washing her hands, Nagatoro appeared and wanted to rinse her hands under the same tap as Naoto, even though there were numerous other faucets nearby. While washing their hands with soap, Nagatoro’s hands became entwined with Naoto’s.

Nagatoro, not being a simpleton, turned the entire thing into a lewd sense. This caused Naoto to flush again, and her remarks aimed to get Naoto sexually aroused. Nagatoro did it more after watching his response, but when Naoto couldn’t stand it any longer, he fled away without washing his hands. The sight, on the other hand, was spectacular. But witnessing Naoto go through all of that throughout the series will make you feel sorry for him at some point.

If you have seen the anime, you already know Nagatoro claims Naoto to be a Creep or too sensitive multiple times. On such an event, Nagatoro took out a doodle drawn by Naoto. The doodle had a picture of Nagatoro in a weird but body-tight fun outfit. Therefore, Naoto decided to draw Nagatoro because Nagatoro had to arrange the dress from wherever she could since Naoto doesn’t have any account of girls’ clothes or even where to get them.

Naoto was confident that Nagatoro couldn’t arrange for the dress; however, Nagatoro proved him wrong the following day. She appeared with the same costumes as represented in the picture. Nagatoro having resources, got the dress arranged from the needlecraft club she claims to exist. The scene ends with Naoto unable to appreciate Nagatoro enough for the costume. Then she gets annoyed and hits Naoto with her claws, calling CREEPY!

Also Read: Top 10 Anime like Komi Can’t Communicate That You Should Watch

When the President wanted to close the art club, Naoto was sad but couldn’t revert. Nagatoro spoke up for Naoto. The situation resulted in the President throwing a challenge on Naoto, asking him to sell more tickets at the upcoming museum. Naoto respects the President, but Nagatoro takes it more like a crush and cannot understand their relationship. Nagatoro gets angry and leaves.

When Nagatoro wanted to check upon Naoto the following day, she found him in the art room with the President. She mistakes the President to be the model for Naoto’s artwork. However, after multiple pursuance and flashbacks, Naoto explains that he only wants Nagatoro to be her model for the art and no one else. In the end, the misunderstanding is cleared, and Nagatoror calls Naoto, “You are a creep”, for speaking his heart.

9. “Yeah, It won’t be boring with at least you around”

Though we know, Nagatoro is often annoying and doesn’t make Naoto work in peace. However, there lies an undeniable fact underneath: Naoto has always been alone. Especially since his interest doesn’t match many in his classes, he has always been alone. The manga or anime did not show much of Naoto’s change with his friends as much have we seen Naoto hanging out with Nagatoro or her friends. 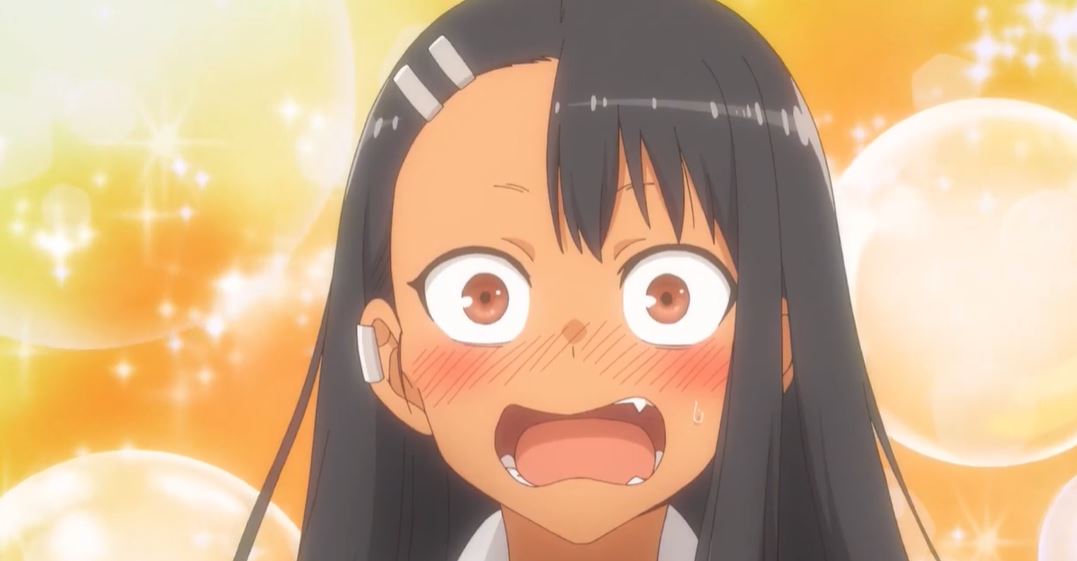 When Naoto was in the art room, these lines slipped his mouth, saying, “Yeah, It won’t be boring with at least you around”. Nagatoro was flustered, calling her Senpai creepy. However, in the end, them enjoying each others’ company is the undeniable truth.

The realization made them embarrassed enough, knowing their posture wasn’t exactly right considering it was school. With realization, their expressions had changed. Not just that, they had also changed their posture quickly. 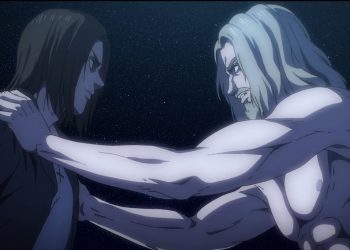