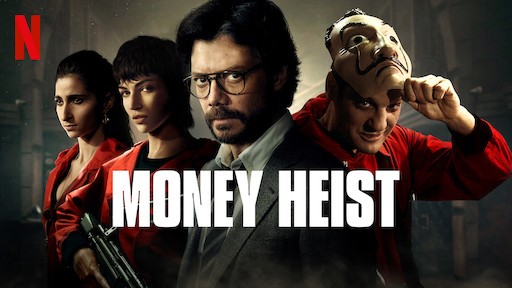 Waiting for Money Heist Season 5? We have some interesting theories. If you have watched Money Heist Part 4, people expected the Heist to be completed, but the season ended with a twist leaving us wanting more. La Casa de Papel, popularly known as Money Heist, is currently the most popular drama series that is being streamed on Netflix. The story revolves around a group of robbers controlled and guided by the mastermind of the plan known as ‘The Professor.’

The first two parts were about assaulting The Royal Mint of Spain, and the next two were about the reunion of the surviving robbers for a heist, i.e., The Bank of Spain. In part 4, the assault on the Bank of Spain is still not complete, whereas the Professor focuses on rescuing Lisbon, who was caught by the police.

Money Heist Season 4 also included the demise of Nairobi after getting shot by Gandia, making the audience furious. Part 4 ended, leaving all of us in a cliffhanger where The Professor is held at gunpoint by Alicia. The ingenuity of the Professor will be tested to find out how he will get out of this situation where the group is left hanging inside on how to make an exit from the bank.

After the completion of part 4, Fans have come up with various theories and speculations:

1) Alicia will join in with The Professor

To take revenge against the Government, who asked Alicia to take the complete responsibility of Rio’s case, Alicia will change sides and join the Professor to help them complete the Heist.

Part 4 included a Timeline of Berlin’s wedding, where he had revealed the plan to his to be wife Tatiana. Alicia has told Racquel that her husband died due to cancer, and his last words were,” Turn on the news.” This link would be a reason that would help the Professor to complete the Heist successfully.

Fans have speculated that Alicia’s child is Berlin’s, and hence Berlin is still alive and acted out his death in the previous Heist.

4) The group will exit from the main gate.

Unlike the previous Heist, no underground tunnel or any form of escape plan has been built in this Heist. Hence it is believed that the group will be escaping from the main gate merging with the protestors in their side wearing a Dali mask.

5) Tokyo is the only one left alive

For the whole series, Tokyo has been the narrator as she narrates the story of ‘The Professor and the teammates taking us through all the heists. Her narration also makes us seem like she is narrating the story that is her past, and she is the only survivor.