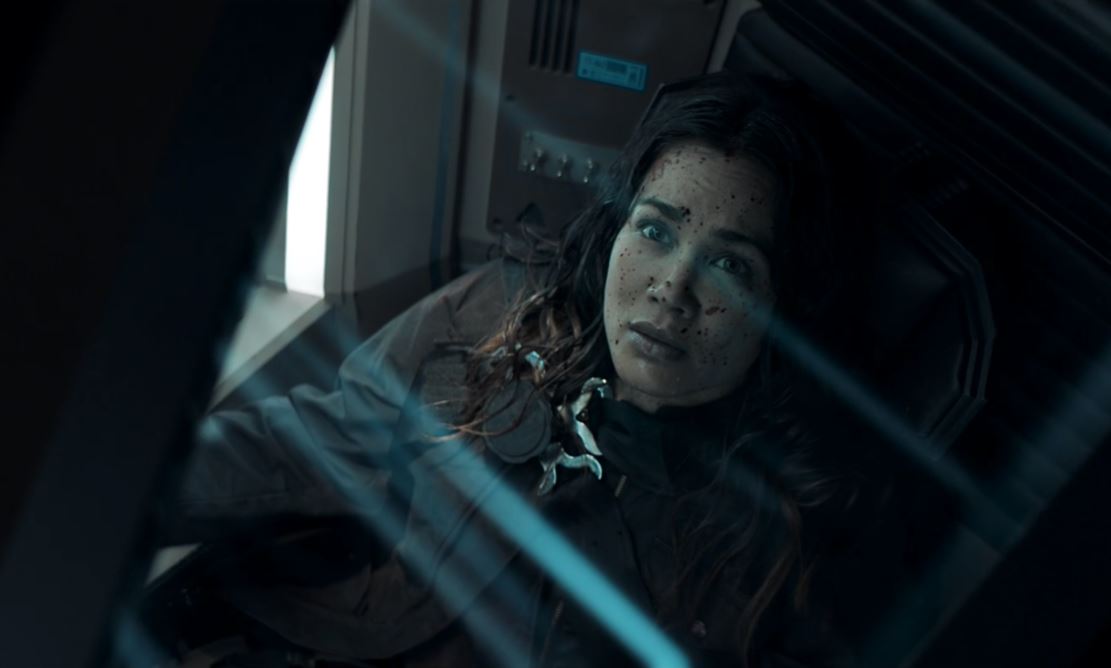 We can see this season of ‘The Expanse’ nearing its end, and the Winnipesaukee finally concludes one of the major storylines while everything else follows it to the edge. This episode had everything, including sad moments of Avasarala and some displays of character development from Amos. Naomi & Drummer again shown displaying their usual characteristics belter endurance and resilience. And while Drummer knows how it feels to manage while she feels threatened, Karal keeps pushing her buttons. And we can see how she is pushing her luck at this point. 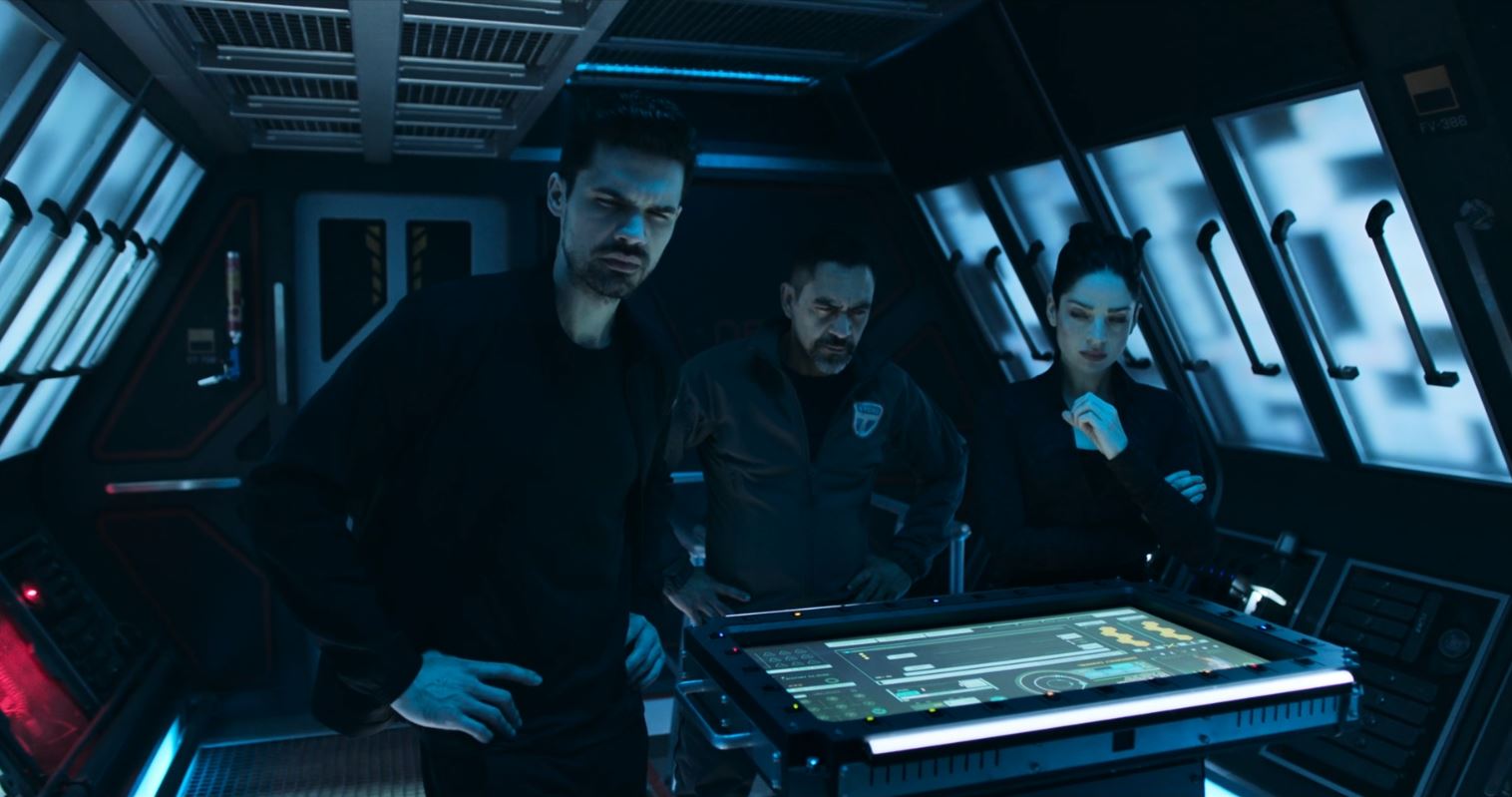 James Holden and crew try to figure out the altered message.

In the last episode of ‘The Expanse’, Naomi is able to alter the fake distress call from Chetzemoka. She alters the message on loop a few times, after which it was cut off. Considering that was probably the only thing she could do at the time, it was pretty ingenious. The interesting part is how everyone reacted to this message. Karal and Oksana heard this message in the last episode, followed by everyone else in this week’s ‘The Expanse’. Marco, who has the most information on the situation, immediately figures out that Naomi is alive. Alex and Bobbie are unable to realize why the change in message occurred. While Holden and Monica are on the same wavelength to try to save Naomi, Bull seems to try and stop that from happening. Both Rocinante and Razorback now head towards Chetzemoka, out of which Razorback is bound to reach first. 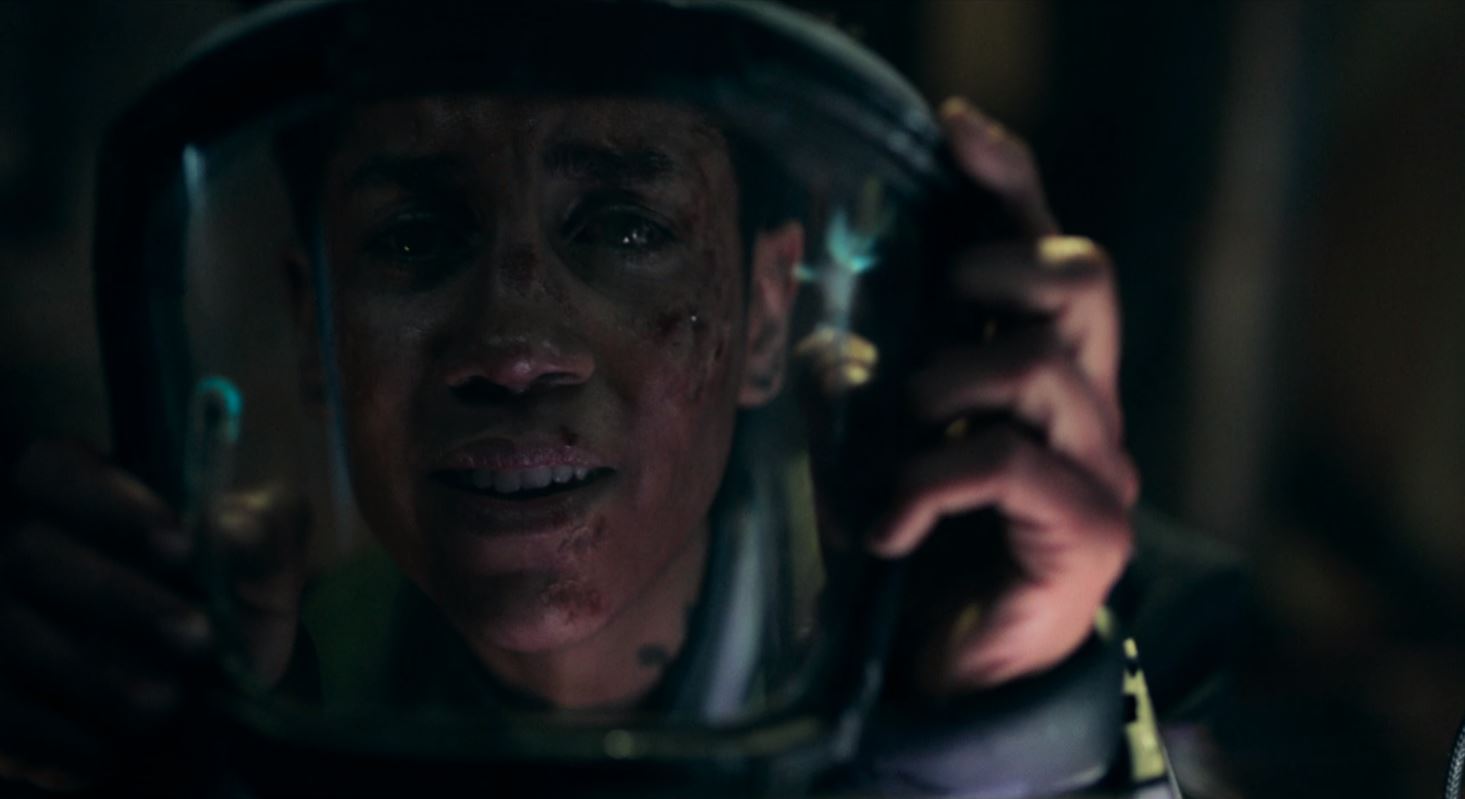 Naomi works out a GPS to track her family.

Naomi is still on Chetzemoka, trying to find a way to protect her family from falling into Marco’s trap. She again takes trips to the vacuum, where she sees some frozen water on pipes. She scrapes them out on her wrist to have some much-needed water. As she gets back, she half collapses onto the floor to see that one of the wires on the explosives were nicked. By the end of the episode, she can connect that to one of the face shields. And as it connects, she is relieved to see that the Screaming Fire Hawk (Razorback) was getting close. And is glad that she could soon reunite with Alex and Bobbie. But then she sees when the explosives will arm and detonate. She needs to do something to warn them, so she goes out to the vacuum again, where we hear a recurring banging noise.

As Avasarala is looking at the memorial of names who died by the asteroid attack, a monitor catches her eye. She learns that Paster went ahead with Delgado’s plan to attack Palas Station and was kept out of the loop. And as she reaches the meeting, they are discussing follow up strikes. Avasarala tries talking them out of it but soon realizes that nobody would listen to her. She questions them if Marco was their role model now, followed by an emotional speech. She breaks down on losing her husband, Arjun, and how even she desires revenge. But the fact is, everyone who lost someone on Palas Station feels the exact same way. Paster feels for her but cannot make decisions based upon emotions and wants to make further attacks. He now plans on attacking Ceres Station, which is inhabited by millions of people, including kids. 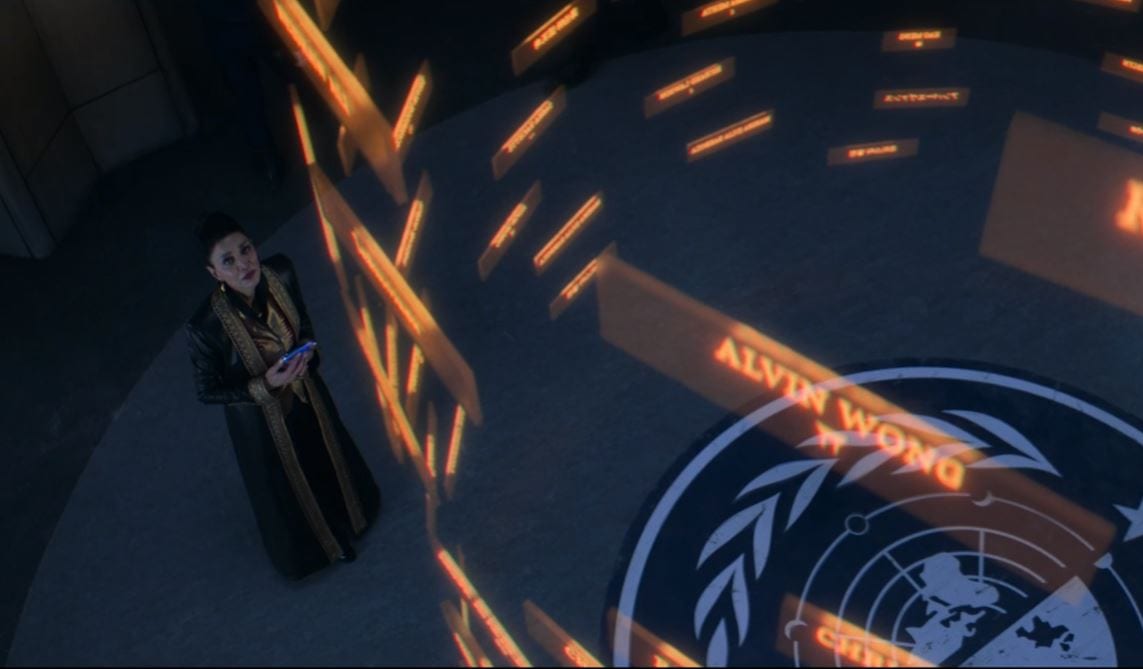 Seeing all this, Avasarala resigns from the cabinet, which is followed by a few more members. Having said out her husband’s death aloud, she finally accepts his death and adds his name to the memorial. Where she is approached by one of the cabinet members informing of people leaving Paster. And how he was soon to be voted out. And the UN was approaching Avasarala as its replacement, which she accepts. After this, she goes to Delgado to ask him to join her cabinet. But Delgado plans on joining a strike force to take down Marco, possibly himself. But the main thing is that Avasarala is in charge, and she finally had an opportunity to reconcile her husband’s death.

Karal and Oksana, after getting some privacy check to find out that Chetzemoka’s flight course hadn’t changed. Which meant even if Naomi was alive, she had no control over the ship. Oksana feels otherwise as she will be able to come up with something soon, and Drummer would want to investigate. Karal threatens Oksana as if Drummer gets to know of this, her whole faction will face the consequences from Marco. Marco knows the whole situation, and they would get orders to carry out soon. Later as Drummer is present, they get an order to rendezvous with Serrio Mal and Kotto to hunt down the Rocinante. It doesn’t make much sense to Drummer as Rocinante would get trapped, so why must they take a risk. Karal tells her a lie, but Drummer isn’t convinced. 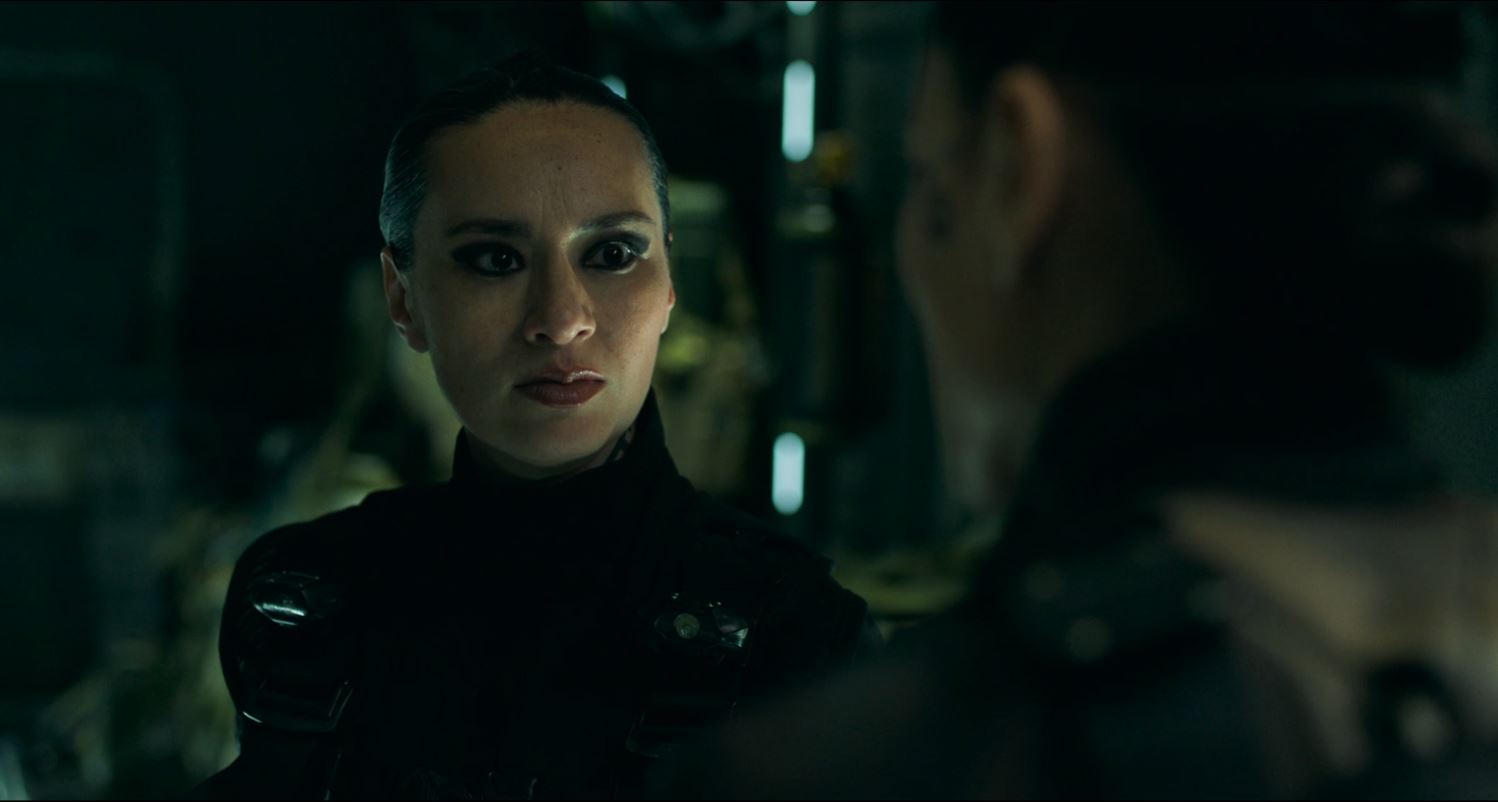 Marco and Karal clearly don’t want to leave things to chance. Oksana, also knowing the truth, takes Drummer’s gun from her, fearing that she would soon kill Karal. Later, Drummer confronts Oksana about what she was hiding from her. There is a powerful exchange between the two as Drummer feels that Oksana doesn’t respect her to reveal the truth. Oksana asks her if she loved her family as much as she loves Naomi. She is hurt by this question but agrees. Oksana reveals how there is a possibility that Naomi is alive, but there is nothing they can do. As if they took any action, their whole faction would bear the consequences. 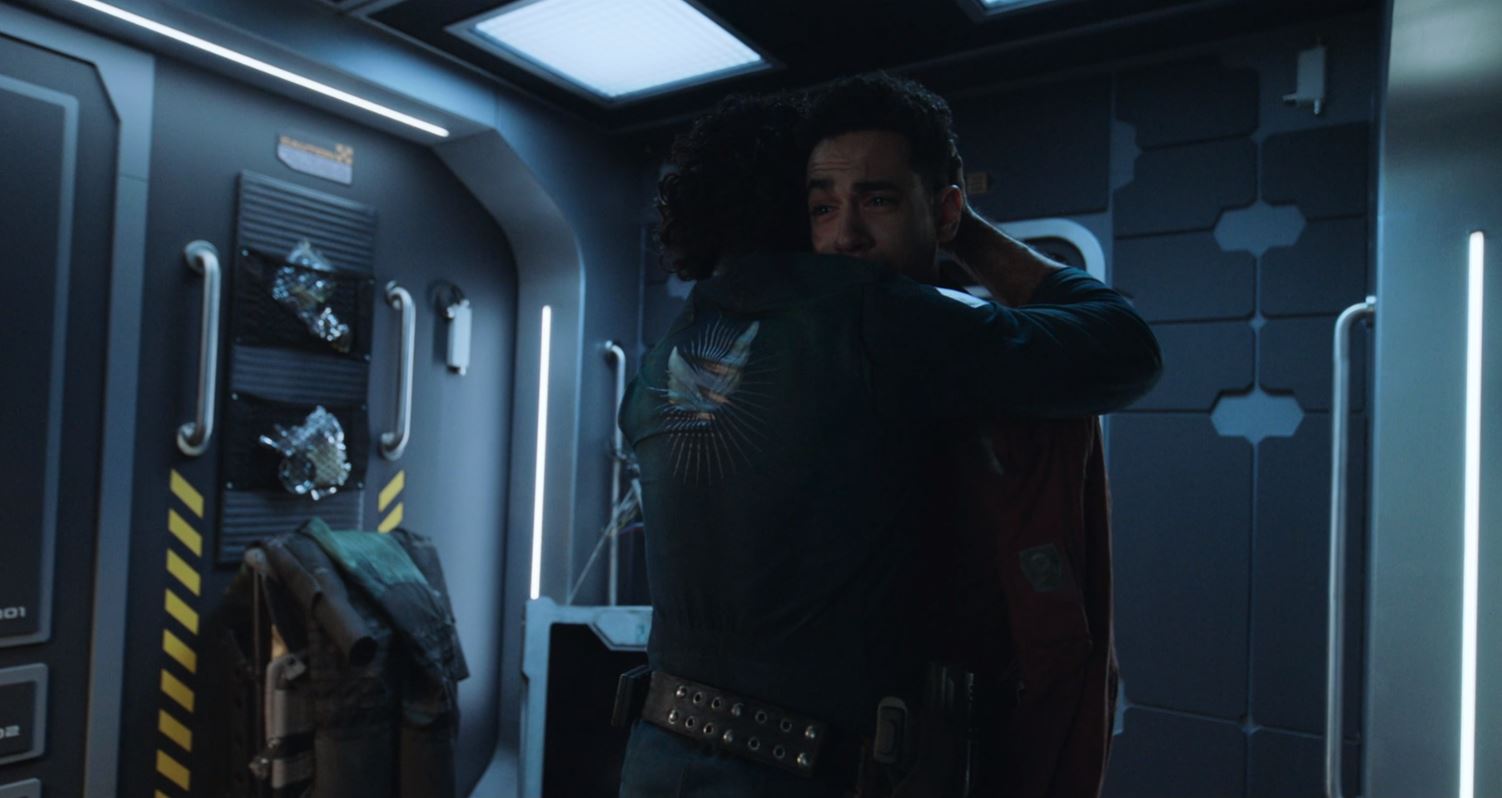 Marco, who now knew that Naomi was alive, doesn’t miss the opportunity to mess with Filip. He goes to him in the pretense of asking for an apology. But he starts being manipulative by making Filip feel abandoned yet again. He tells Filip how Naomi didn’t step out of the ship in desperation to kill herself but to escape. He tries to put much intensity into his words saying, “She left us, she left both of us again.” Hearing this, Filip flips out, which Naomi knew would happen. But she had to make this decision to go save her family.

Amos, Clarissa, and Erich head to a deserted Winnipesaukee Island on a helicopter with around a dozen of Erich’s henchmen. They are able to find the launch pad where the winter staff identifies Clarissa. They inform them that the shuttle hasn’t taken off for quite some time due to some reactor problem. Seeing their helicopter, staff from other houses feel that relief efforts have come to help them. They decide to take them, but a private security team comes there while working on the shuttle. Amos and Erich realize that it’s a shakedown in a pretense of asking for resources. Guns are drawn, but Clarissa tries to deescalate the situation. Amos knowing that they will come back, asks them to leave as they try to finish the work before they arrive again.

Clarissa and Erich have a conversation regarding the name ‘Peaches’ and ‘’Timmy’. They discuss tribes and how they must be similar when Erich finally finds out that Clarissa served a life sentence for multiple homicides. As Amos goes out to think, he talks with Hutch. She tells him how after surviving in Baltimore, she does not want to start over. Amos tells her that no one really starts over as nothing is left behind. He realizes his work on Earth is done, and he must return to his crew back in Rocinante. 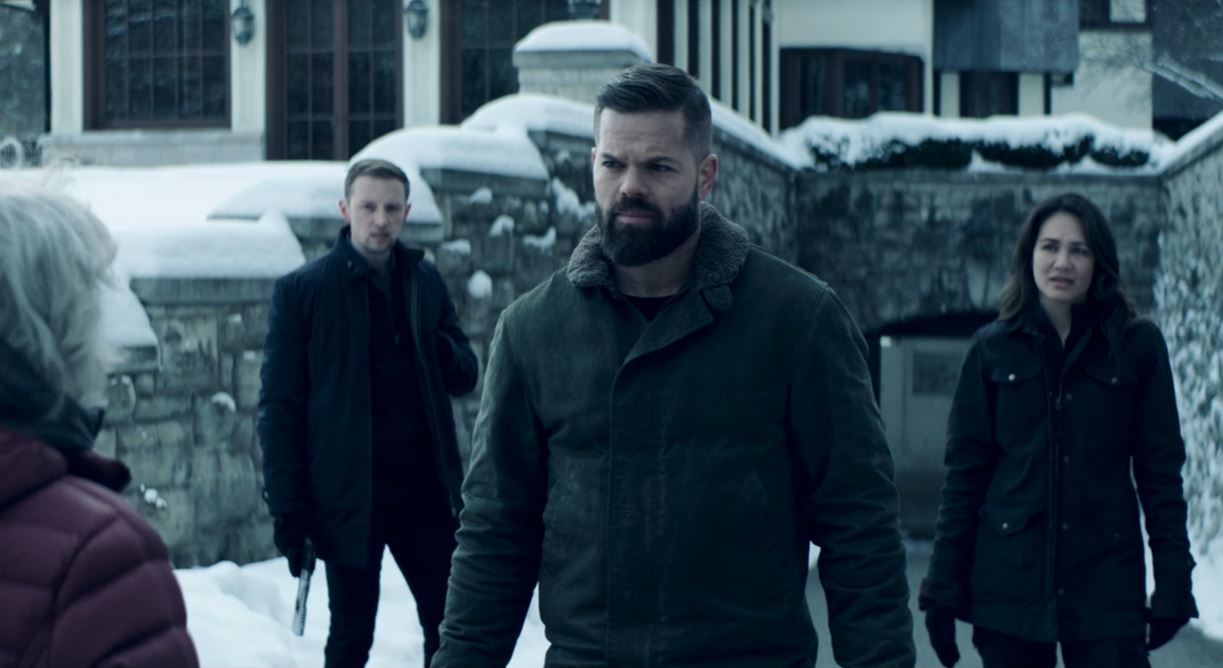 When they finally fix the shuttle, the security team attacks them. There is quite an enjoyable shootout witnessing a few causalities among Erich’s men. During this, Clarissa kills many of the soldiers who bear hands while Amos and Hutch protect one another. When they enter the shuttle, Erich launches it, lighting all the security team up in smoke. It seems like Hutch survives, and they may be able to reach Luna in next week’s ‘The Expanse’.

This week’s ‘The Expanse’ saw the end of Amos’ journey on Earth finish. Avasarala is back in charge as the Secretary-General. The Razorback and the Rocinante head towards Chetzemoka to save Naomi. The situation with Drummer is pretty intense as the only way of getting out of it would be to kill Karal. But then again, her faction may be hunted down by Marco. The episode was quite interesting as Avasarala finally gets to reconcile and accept her husband’s death. This scene is pretty emotional, carrying some weight to it. Amos has a new perspective where he has new ways of thinking. And is made to make some tough decisions based on his old and new self. The show has maintained the intrigue among ‘The Expanse’ viewers to come back as the season is nearing its end.

You can watch all the episodes by ‘The Expanse’ on Amazon Prime Video.