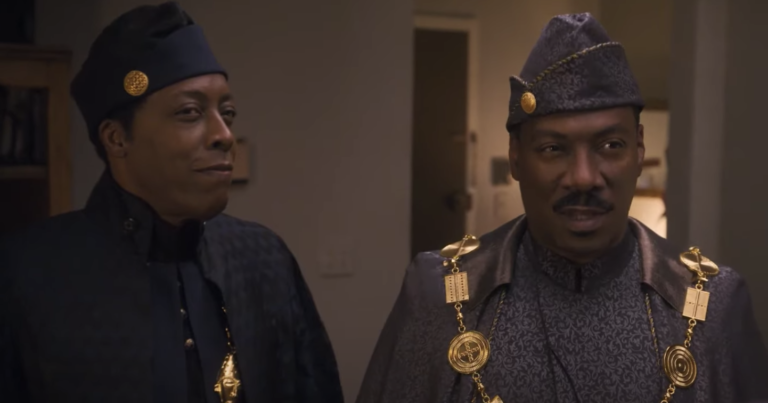 It’s been more than 30 years., but yes Coming To America has been coming up with a sequel after all this time. Originally film directed by John Landis starred Eddie Murphy who also wrote the story of the film. The movie was quite a commercial success becoming a good old classic to watch anytime you like. Now, a brand new sequel titled, “Coming 2 America” is coming being directed by Craig Brewer. The screenplay duties are officially being handled by Kenya Barris, Barry W. Blaustein, and David Sheffield. The new movie is all set to release with Eddie Murphy returning. So, the question remains what will be about after 30 years of gap.

Coming to 2 America, which was originally set for a theatrical release will now be releasing Amazon Prime Video on March 5, 2021. Due to the Covid-19 Pandemic, Paramount sold the distribution rights to Amazon Prime. So anyway, here we are breaking down what will be Coming 2 America Starring Eddie Murphy be about.

So, the official premise of Coming 2 America states that the movie will serve as a sequel to the original film. It will be set after the events of the original. It will follow Prince Akeem Joffer on his way to become the king of Zamunda. While everything unfolds, he discovers that he has a son in America. A son named Lavelle living in Queens. To honor the wish of his royal father, Akeem and Semmi decide to set off America once again. So that they can crown his son the Prince.

Coming 2 America – What Would It Be About

So, the latest trailer of Coming 2 America gives us quite a glimpse into a movie. It opens up with Akeem and Semmi back in America looking for their son in a barbershop. The trailer follows up with them searching on the streets of New York City until they finally meet him. The next scenes clearly showcased to us the cultures of Zamunda, the land Akeem is King of. This means more than America, the movie is all set to focus on Zamunda and its culture.

Initially, much like in every movie, we see Lavelle, the son of Akeem denying to come until the handouts come in. Even Lavelle’s mother agrees to bring him in. Yes, there are a few Mufasa and Wakanda references too. Next, we are brought into the royal palace of Zamunda and all the culture of the country. We see Akeem’s family meeting Lavelle and his family.

While the family dinner carries on, we finally see the main conflict playing in the film. We realize that Akeem’s daughter Meeka wants to be the heir to him. The reason is a law that the place follows where a woman is not allowed to be the heir. Assuming in the next scene we see Akeem and his wife having a fight over Meeka resulting in throwing Akeem out of his own room. While we witness Meeka’s absolute skills we also meet General Izzi, the antagonist of the film. He is trying to take over Zamunda by knocking Akeem down. We see a few awkward sequences with the two nemesis meeting in.

Overall, Coming 2 America is a little opposite of what the original film was about. For instance, there is a huge focus on Zamunda and its culture. So anyway it seems like another lighthearted comedy tale good for a lazy watch on weekends. We are all set to see the next generation of Zamunda Kingdom. Also, we are bound to see the fearless story of Akeem’s daughter Meeka as she wants to be the next heiress to his throne. Plus, there enemies looking out for the kingdom too. So who will be the heir to Akeem, will Meeka fulfill her dream, and what threat is General Izzey bringing in? All in the upcoming Coming 2 America on Amazon Prime Video. You can check out the latest trailer of Coming 2 America below.

Directed by Craig Brewer, Coming 2 America sees an ensemble cast. Some familiar faces from the original film and some newer ones. Eddie Murphy returns as King Akeem Joffer along with Arsenio Hall returning as Semmi. Jermaine Fowler is joining in as Lavelle with Leslie Jones as his mother Marry Junson. Also include Tracy Morgan as Reem Junson, KiKi Layne in the role of Meeka Joffer, and Shari Headley as Queen Lisa Joffer. Lastly joining in the movie is Teyana Taylor as Bopoto Izzi, Wesley Snipes as General Izzi, and James Earl Jones in the role of King Jaffe Joffer.