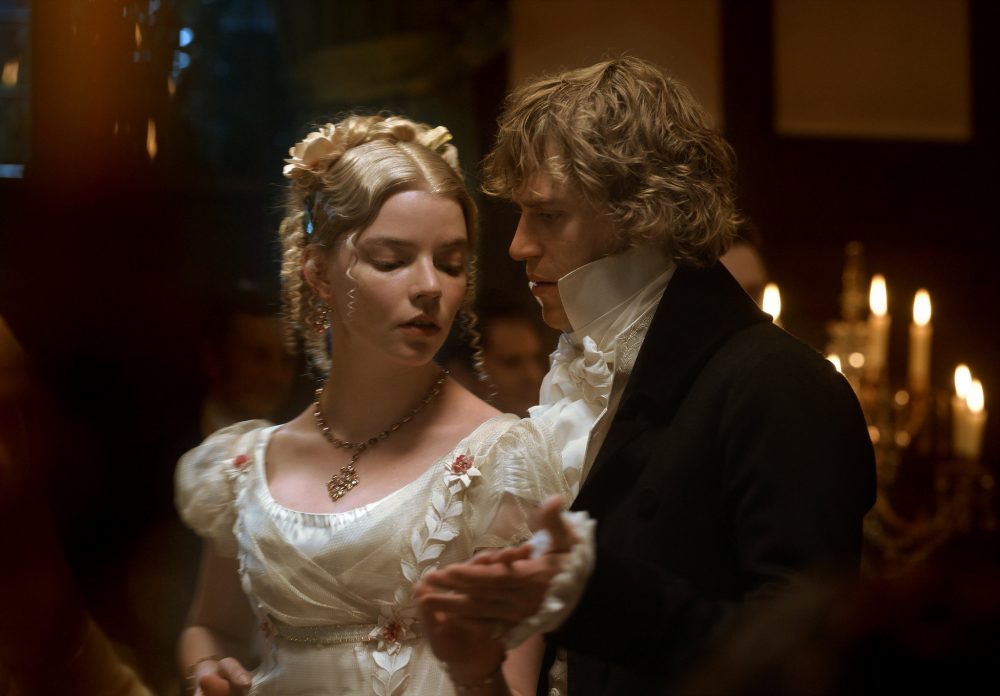 Movie adaptations based on novels have been a common trend since the beginning of the 20th century. Among these are the novels written by an English Novelist Jane Austen whose works were published in the late 18th century and early 19th century. As a female author in a male-dominated society, Jane Austen suffered criticism for writing about strong female characters. However, that didn’t stop her from getting a critically and publically acclaimed author whose works are popular and adapted into movies even to this day. Her use of irony, realism, humor, and social commentary was what made her work unique. She wrote against that society’s stereotypes and portrayed strong women characters. Here, we will look at the list of popular movies based on Jane Austen’s novels that are definitely worth the watch. 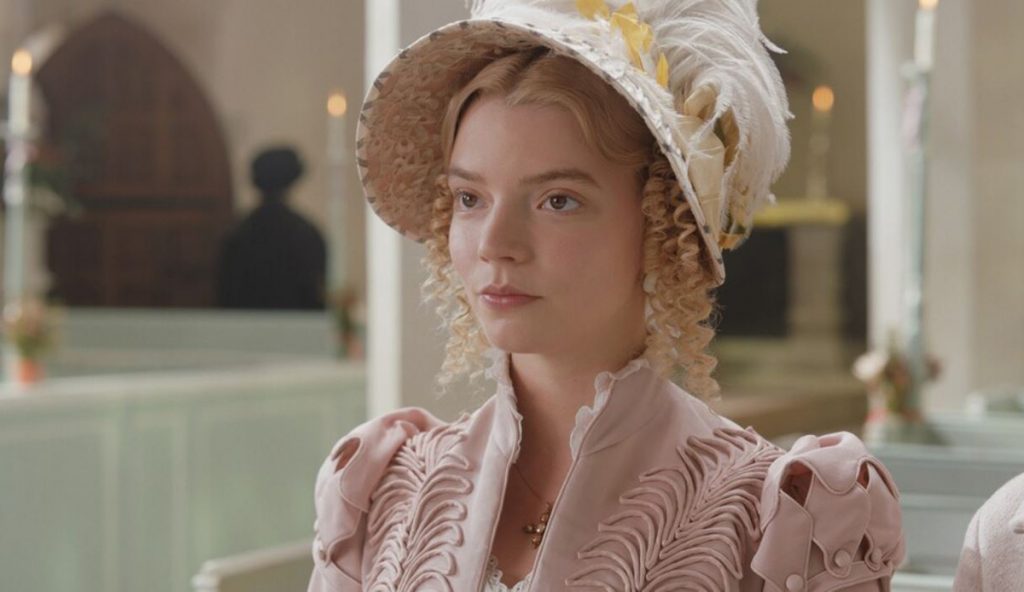 Jane Austen’s novel Emma has been adapted as both movies and TV many times. However, in March 2020, another Emma reappeared on the silver screen and became famous quickly. The story is typically about a rich girl who lives with her father in a giant estate crowded with people. She always plays as a matchmaker whenever she could go for them. Emma becomes so busy in matchmaking others that she nearly misses her own chance at love. She doesn’t want to marry because she thinks there is no need for marriage as she is already rich. Emma is quite comfortable with her freedom and doesn’t want to compromise it with marriage.

Then there’s Mr. Knightley, Emma’s childhood “frenemy” whom she can’t tolerate. He doesn’t like how she meddles with other people’s love life and wants her to stop doing that. But Emma being stubborn as always, get into arguments with him. The two can’t see eye to eye with each other. But there’s also some chemistry between them and a simmering tension that shows potential in better relationship development. The movie portrayed their chemistry quite well in the middle of all that drama and comedy.

Jane Austen describes Emma as a character whom no one will like but herself. That didn’t come true as Emma’s misjudged meddling and stubbornness was considered as charming for the audience. That was even more so when Anya Taylor-Joy played the character. Apart from that, the movie showed comedy both in small and larger moments. It’s in the characters’ gestures, eye-contacts, and perfect timings. Overall, the movie portrayed Emma in a somewhat modern context that was quite new for the audience. 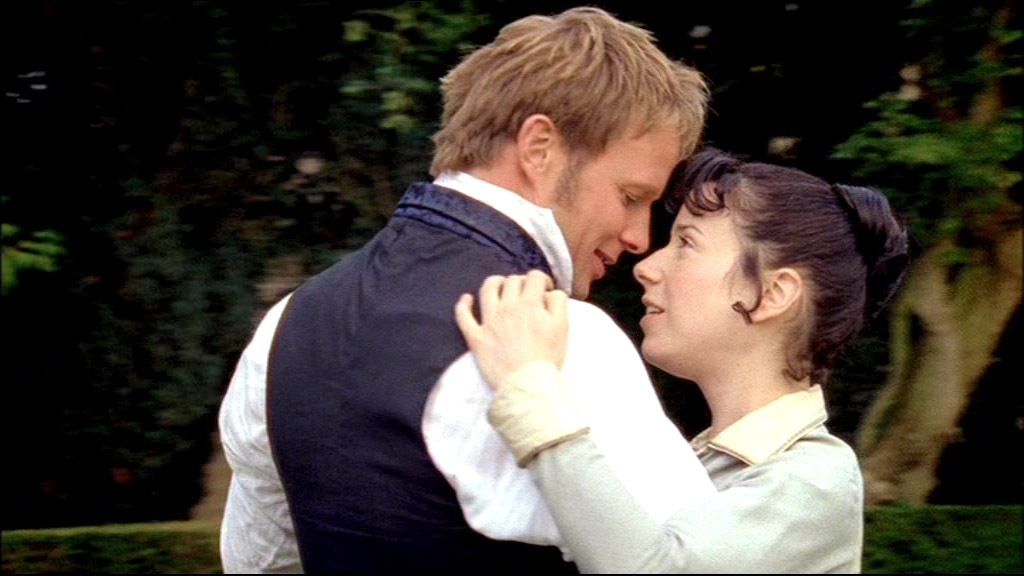 The story is about a young couple who were forced to separate due to circumstances. Anne Elliot and the young naval officer Frederick Wentworth fell in love with each other before the film’s events. However, Anne’s godmother and family persuaded her to break up with him because she was only 19, and they didn’t want her to get engaged in the middle of a war to a naval officer who didn’t couldn’t give her a stable future.

After eight years, financial difficulty forced Anne and her family to rent their home to tenants Admiral Croft and Mrs. Croft, who are sister and brother in law of Frederick Wentworth. Eight years later, Frederick is now a Captain and a noble. They meet again, and although their feelings for each other remain the same, Frederick acts indifferent towards her. This made Anne believe that he resents her for what happened eight years ago.

Anne is devastated when she sees him with Louisa Musgrove and heard people talking about their possible engagement. Meanwhile, Mr. Elliot starts courting Anne, and everyone starts discussing that they will probably get married, which eventually Frederick found out about. With the misunderstandings between them once again lead the couple to separate? 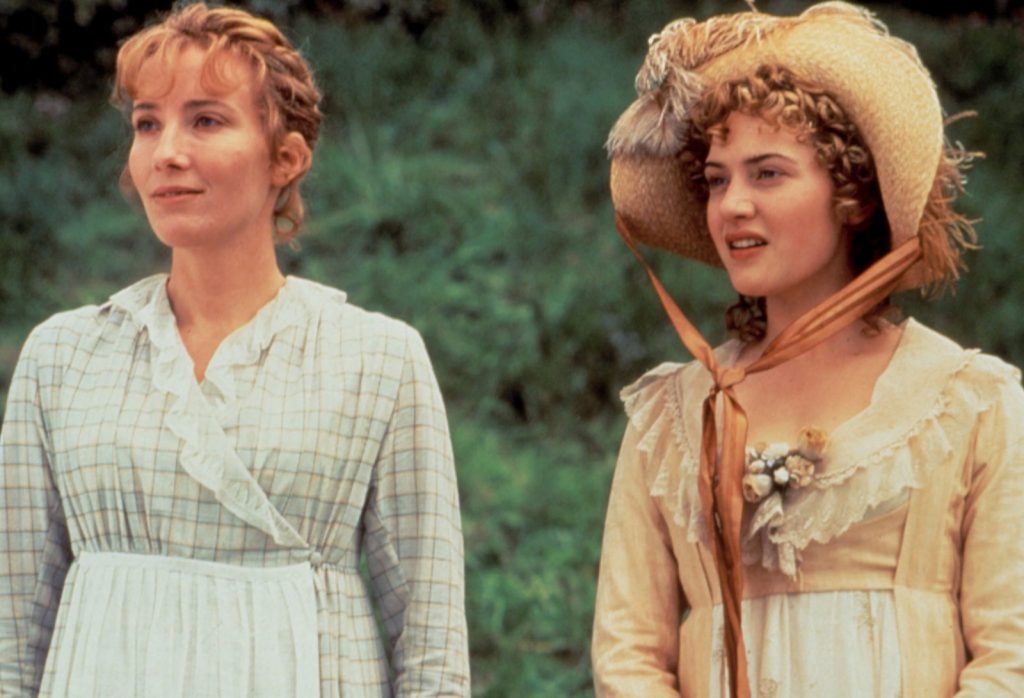 This 1995 classic is the movie adaptation of Jane Austen’s most popular works Sense and Sensibility. The story revolves around the Dashwood sisters, who were originally wealthy but forced to live a financially unstable life after their father’s death. Mr. Dashwood’s three daughters and his wife found came to know that their combined inheritance sums up to 500 Euros a year. Mr. Dashwood gave all his inheritance to his son John from his previous marriage, and John’s wife forces the mother and daughters to live poorly.

The widowed Mrs. Dashwood gets help from her cousin, who offers her and her daughters a small cottage on his house estate. The sisters Elinor and Marianne are exactly opposite to each other and have different ideals in life. Elinor is the eldest daughter, who is sensible and responsible. She develops feelings for her step sister-in-law’s brother Edward Ferras. At the same time, the impulsive Marianne falls in love with Colonel Brandon. The story proceeds as their feelings develop, and the sisters’ lives start to get better from then. This movie is one of the most popular movies based on Jane Austen’s novels even today. 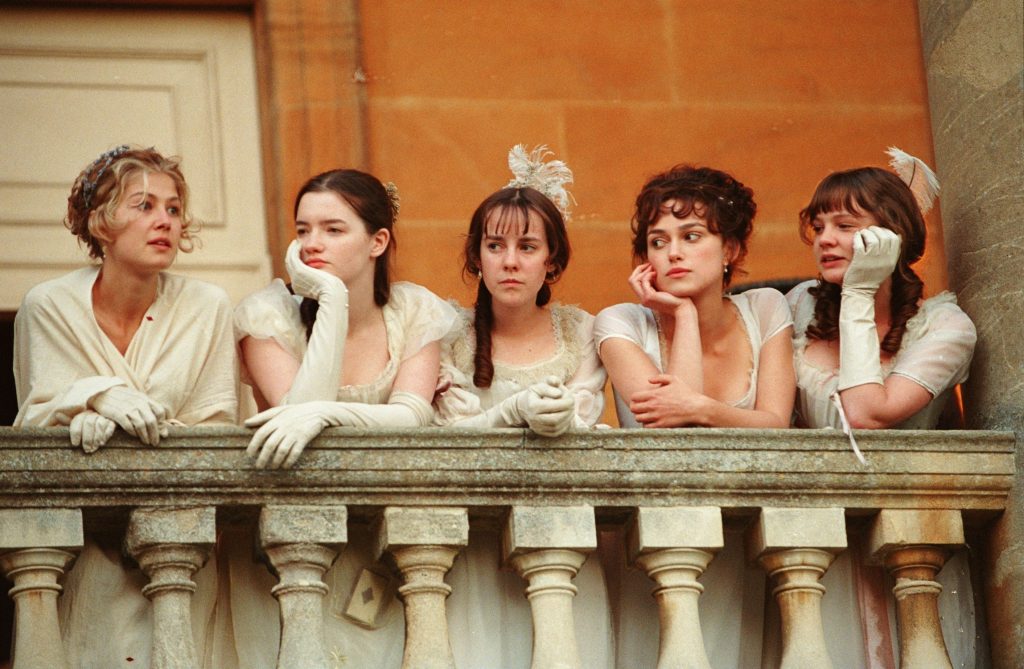 Just like Emma, Pride, and Prejudice also got many adaptations over the years. Among them, this movie stands out the most. With the beautiful architecture of Chatsworth House, Wilton House, Belton House, and many more, the movie drew its theme quite beautifully. The story revolves around Elizabeth Bennet, who is one of the five daughters in the family. Having five daughters and moderate money, her mother always nags her and her sisters to find good men and marry them. Elizabeth didn’t like the thought of marrying someone for materialistic gains. She often quarrels with her mother because, fortunately, her father supports her every decision.

Her life began to change when she meets the silent and aloof Mr. Darcy, a rich noble. He falls in love with her but tries to hide his feelings as much as he can. Meanwhile, she starts misunderstanding him when Mr. Wickham told her lies about him. Due to that, she rejects Mr. Darcy when he confessed to her. Although he cleared the misunderstandings she had, they didn’t talk for a long time. The story also includes the relationship between Elizabeth’s sister Jane and Mr. Darcy’s best friend, Mr. Bingley. Pride and Prejudice is one of the most popular movies based on Jane Austen’s novels. 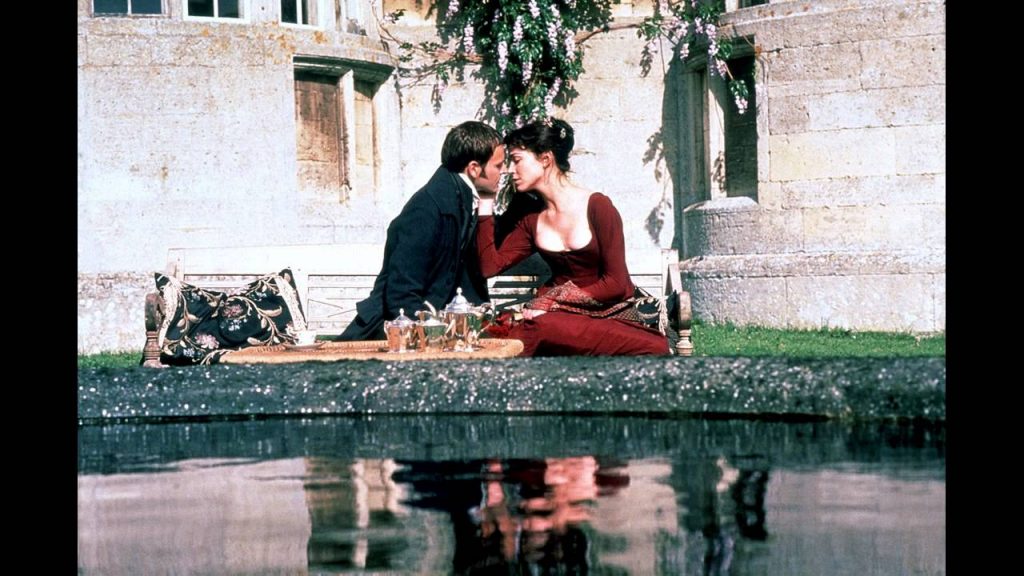 This movie is somewhat different from the other movies based on Jane Austen’s novels. Mansfield Park incorporates Jane Austen’s life into the film and the issues of slavery and plantation life. The movie begins with a young girl whispering a melodrama into the ear of her wide-eyed little sister. Her name is Fanny, a young poor girl whose family lives in a small cottage. When Fanny was 10 years old, she was sent to live with her wealthy uncle and aunt because her parents couldn’t afford to raise all their children. Unfortunately, Mrs. Norris treats her like a servant. Fanny’s cousin Edmund treats her kindly, and she develops feelings for him over the years.

Eight years later, Henry Crawford starts courting Fanny even when she showed clear displeasure with him. Also, Edmund starts courting Henry’s sister Mary. The story portrays the complicated relationships of the characters and how their lives intertwine with one another. Despite the serious plotline and complicated characters, this movie is actually a very witty and funny movie that will keep you entertained until the end. 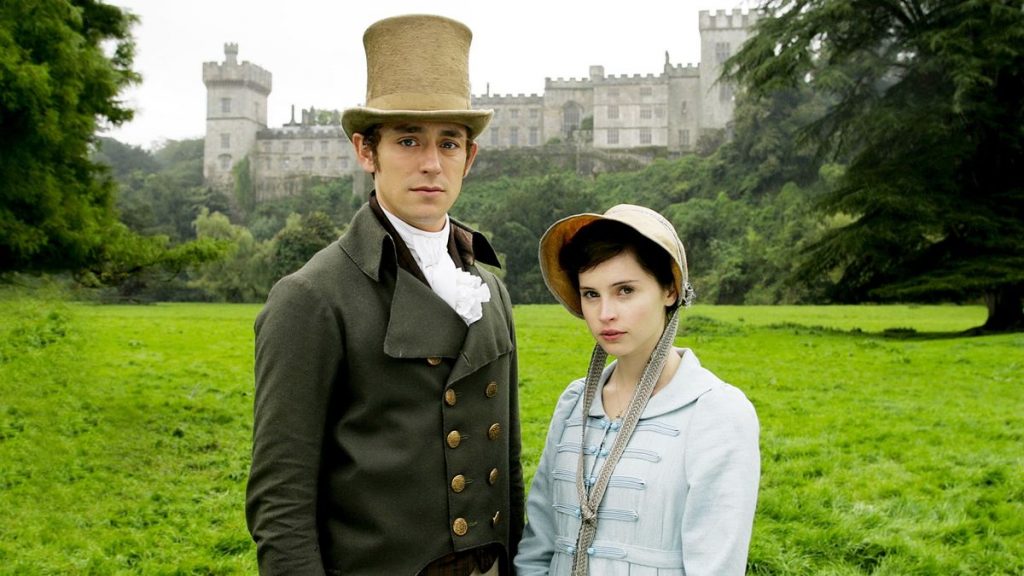 The story is about Catherine Morland, who is the daughter of a rural clergyman. Her views of life are somewhat sheltered and immature as she is mostly interested in gothic romance novels. She travels to Bath (a city in England) to experience the world outside the small place she spent all her life in. There, she becomes friends with Isabella. Isabella’s brother John becomes attracted to Catherine, and Isabella gets together with Catherine’s brother James. Catherine also meets Henry Tiley, with whom she gets attracted. However, the differences in their social status hinder their relationships.

Geraldine James narrated the movie as Jane Austen’s voice. This movie is the adaptation of Jane Austen’s underrated novels, but the story wasn’t disappointing in the slightest.