‘The Call Of The Wild’ is a 2020 American adventure film based on the Jack London 1903 novel of the same name and Twentieth Century Pictures’ previous 1935 film adaptation. This new adaption of this movie is directed by Chris Sanders and stars Harrison Ford, Dan Stevens, Omar Sy and other extra characters which makes this movie much more interesting. This story revolves around the dog called Buck who is a lovely dog and is especially loved by all. This dog who lived a comfortable domestic life in California is now, made to work as a mail-delivery dog in the harsh and tormenting climate of Alaska. Buck is the companion of the man named John Thornton. They both encounter numerous amount of adventures and the whole fil revolve around these adventures and forms the man narrative of the film.

This movie with no doubt at all holds the power to grab their audience and also tells the importance of their pet animal. People all around the world were amazed by the first edition silent film and this adaption is also exhilarating to watch too. If you enjoyed watching ‘The Call Of The Wild’ and you are in the search to find movies like this we have got you covered. This list will have 8 movies that are mind-boggling like this movie and many of them are available on Netflix, Hulu or Amazon Prime.

‘The Art of Racing in the Rain’ is a 2019 American comedy-drama film directed by Simon Curtis and written by Mark Bomback, this movie is on 2008 novel of the same name, by author Garth Stein. This movie is been narrated by an old dog (Golden Retriever) named Enzo and he tells the tale of his life, who now is dying. Enzo is waiting for a master and best friend to return home and his master’s name is Denny. Denny arrives but finds Enzo unable to move, as Enzo begins to narrate his life.

Years prior, Denny decides to purchase a puppy and that puppy is Enzo. They found themselves connected at the first moment. Denny is pursuing his career in auto racing and at the same time cares for his puppy. one day, Denny meets Eve at grocery shop and then two begins to date and eventually gets married. Eve gets pregnant with Denny’s child and later she gives birth to a daughter named Zoe. Afterward in this movie, their relationship starts to tumble down as Eve is diagnosed with Brain Cancer and demands custody of Zoe. This story takes a toll on both of them and Enzo sees it all. This movie is one of the best-narrated movies and is heartbreaking to watch and also lifts your heart at the same moment. This is a movie we recommend you watch.

‘Klondike Fever’ is a 1980 Canadian adventurous film, which is based on the writing of Jack London. This movie follows London’s journey from San Francisco to the Klondike goldfields of the Yukon Territory, Canada in 1898. While many stories of Jack London has fictionalized character as a protagonist but in this story, Jack London himself is the main protagonist. ‘Klondike Fever’ shows the whole journey and various challenges that come in between of London. These films bring the adventurous soul out of your body which was sleeping in you for a long period. 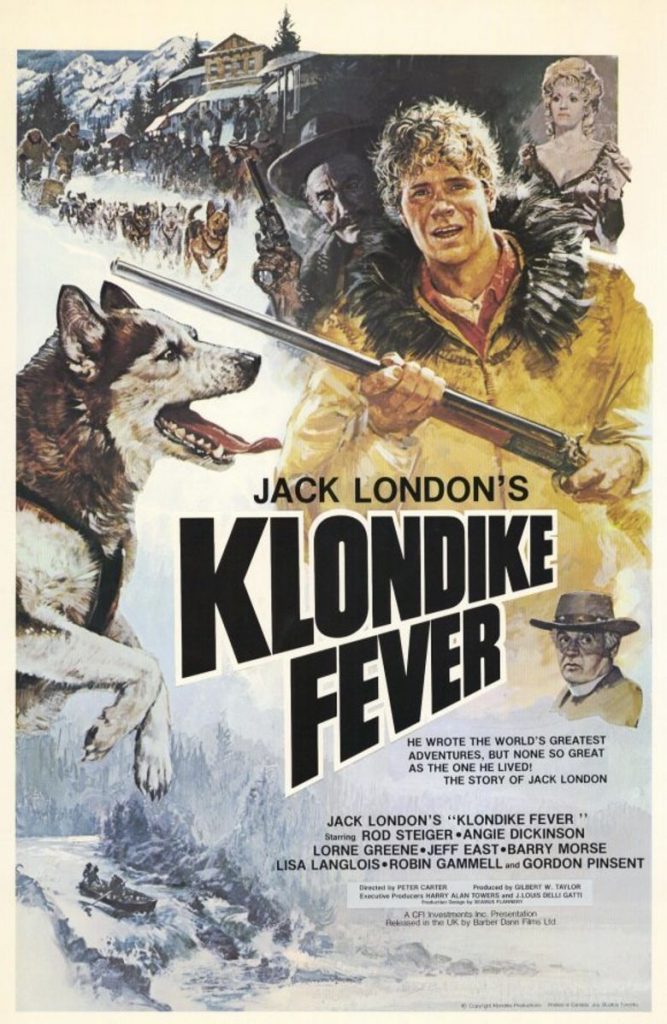 White Fang is a 1991 American Northern adventure drama film which is directed by Randalf Kleiser starring Ethan Hawke. This film is also based on the novel by Jack London named the same (White Fang). This movie tells the story between a young Klondike gold prospector and a wolfdog named White Fang. Jack Conroy (protagonist) which is played by Ethan Hawke comes to Alaska, to collect some money to pay the debt that his father owns. After a while, Jack rescues a dog named White Fang from his cruel master and they sense the create bonding between them. Furthermore, their journey commences and this movie tells the tale of their friendship between White Fang and Jack Conroy. This movie is just amazing to watch and recently White Fang has received an animated adaptation by Netflix in 2018. 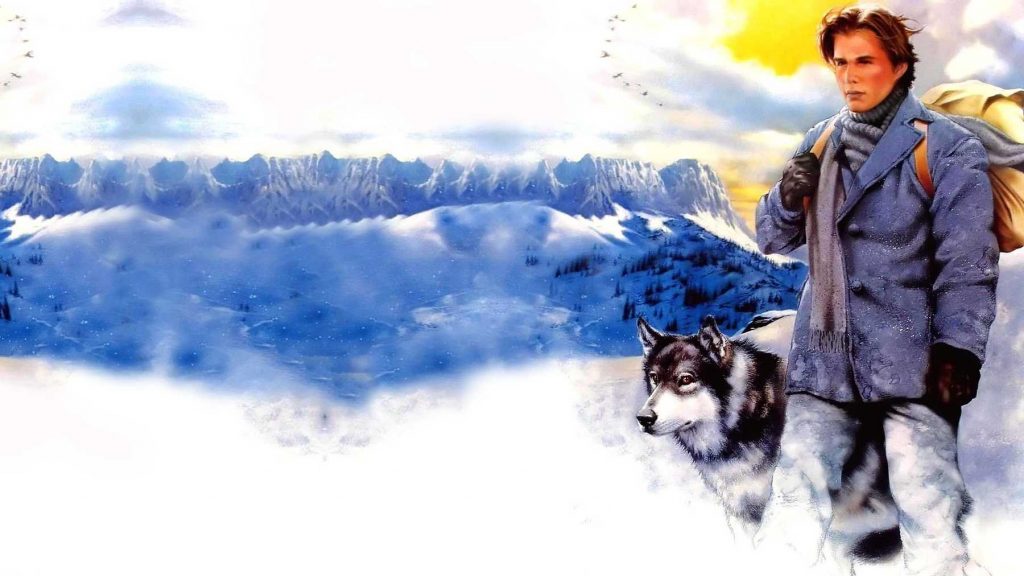 101 Dalmatians is a 1996 American live-action comedy adventure film which is based on Walt Disney’s animated 1961 movie adaptation of Dodie Smith’s 1956 novel ‘The Hundred and One Dalmatians’, this movie is directed by Stephen Herek. This movie was one of the hit movies in 1996 grossing over 320.6 million dollars in theatres. ‘101 Dalmatians’ won many awards and was even nominated for one of the Golden Globe categories.

This movie plot is amazing and unique. This movie follows an American video game designer named Roger who lives with his Dalmatian Pongo in London. One day, Pongo sets his eyes on a beautiful Dalmatian named Perdy. After a chase, they found who her owner was and it was a young lady named Anita. After a while, Anita and Roger fall in love and they eventually get married along with their Dalmatians. Anita used to work at House of de Vil as a designer. Anita finds out that Perdy is pregnant and later on gives birth to 15 puppies. Anita’s boos ask for all the 15 puppies in return of money but Anita and Roger decline the offer. Her boss sends thieves to steal all the puppies and then the plot starts to pick up the pace and in the end, they end up 101 Dalmatians. 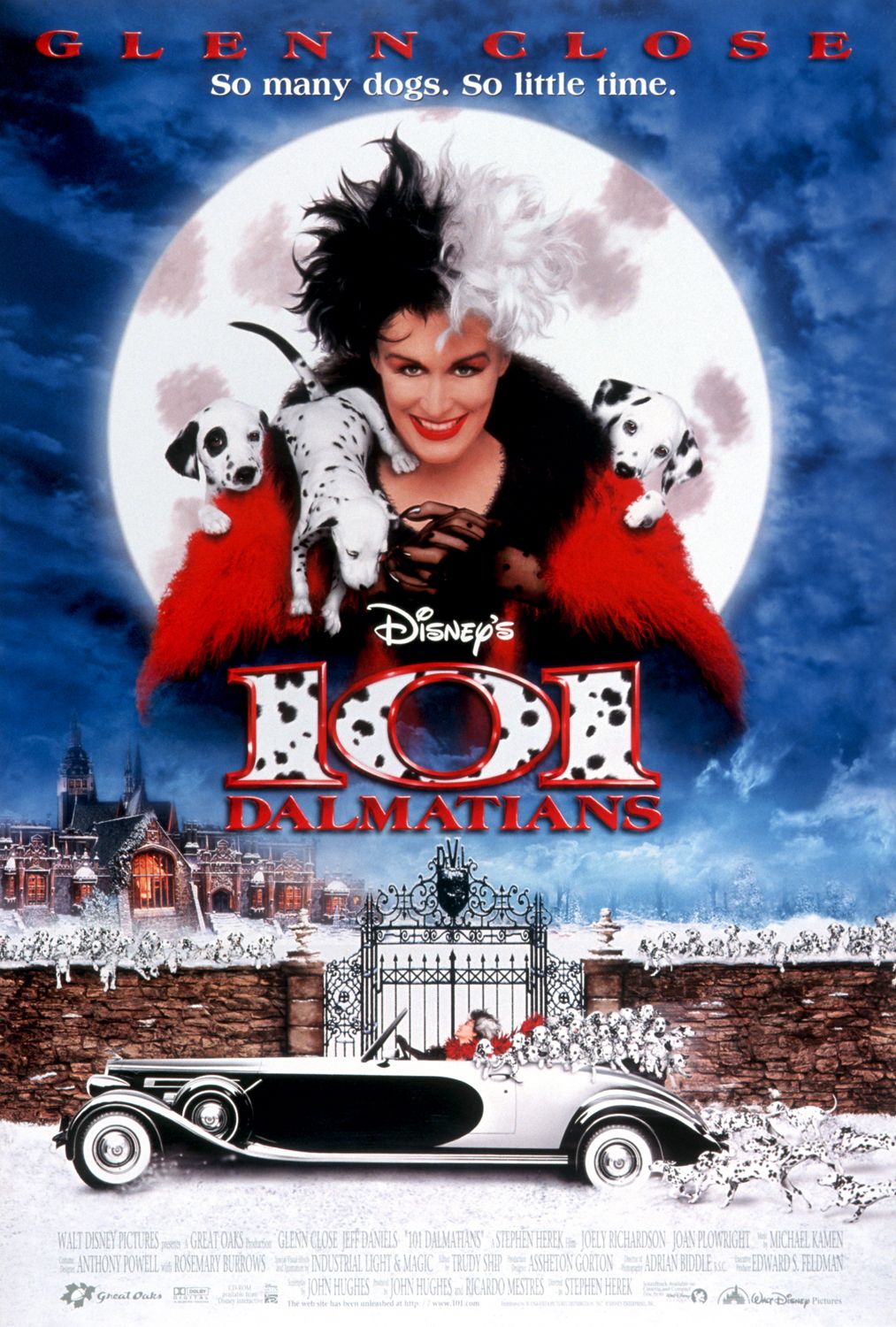 ‘White Fang 2: Myth of the White Wolf’ is a 1994 American northern adventure film directed by Ken Olin and starring Scott Bairstow, Alfred Molina, and Geoffrey Lewis. This film is the sequel to the 1991 White Fang. ‘White Fang 2’ starts off were the first part of this movie left off. In this movie White Fang joins his master’s friend named Henry Casey, in order to rescue the group of indigenous people from the hands of powerful industry holders who are taking away their lands forcefully via mining. ‘White Fang 2’ shows us a clear example of how native people and many animal species are getting killed and endangered due to this rapid civilization and modernization. 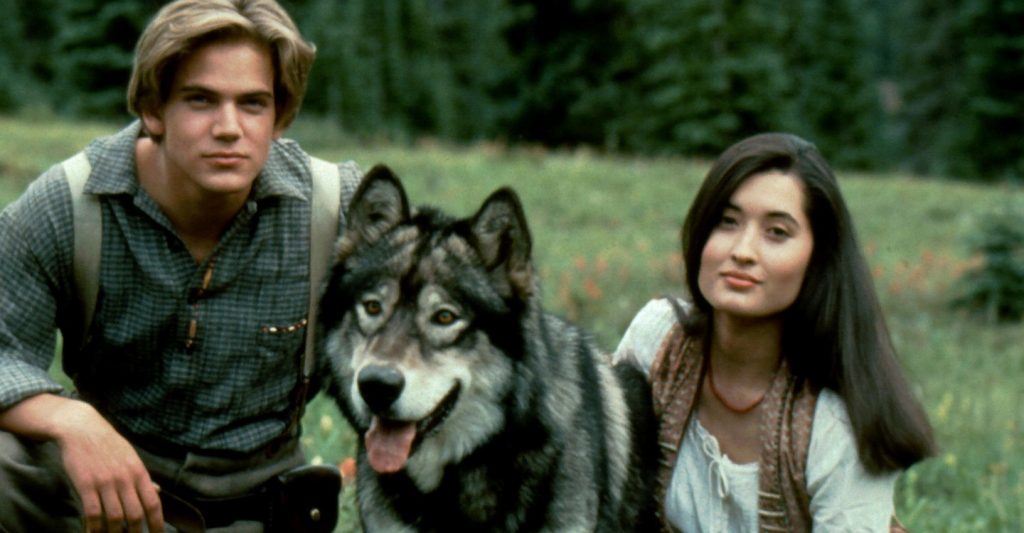 Old Yeller is a 1957 American drama film produced by Walt Disney. It stars Tommy Kirk, Dorothy McGuire, and Fess Parker. This movie is based upon the 1956 Newberry Honor-winning book of the same name. This movie tells the tale of the boy and a stray dog in post-Civil war Texas. A teenage boy named Travis who lives on a farm along with his mother and brother Arliss. One day, he finds a stray dog and tries to shoo him away but eventually becomes friends with him. Dog’s name was Old Yeller. This movie revolves around both of them and tells a beautiful tale and it is recommended to watch. This movie’s success led to the sequel named Savage Sam which is just as beautiful as this film. 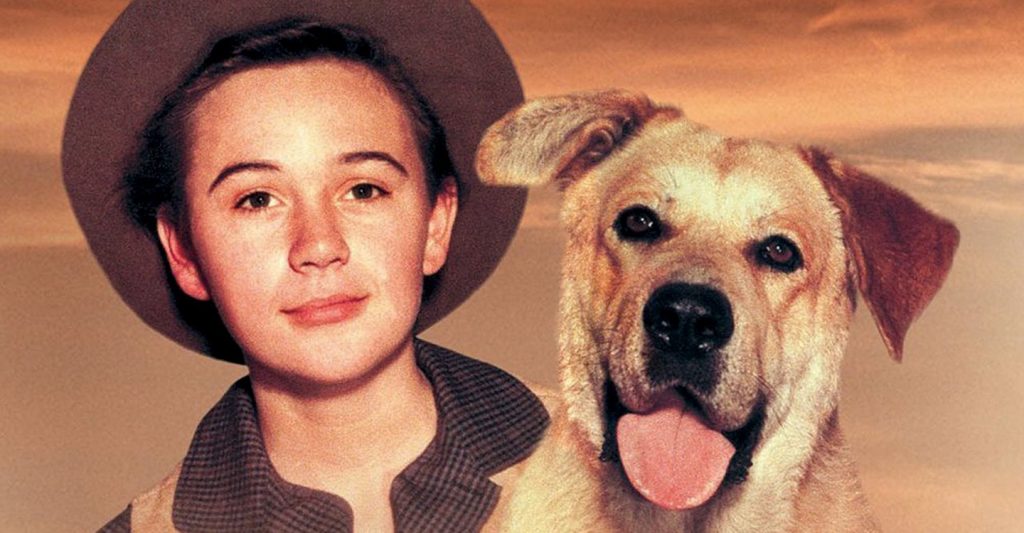 ‘A Dog of Flanders’ is a 1960 American drama film directed by James B Clark with stars David Ladd, Donald Crisp and Theodore Bikel. This movie is based on the 1872 novel named the same which was written by Ouida. This movie is one of the oldest movie in this list but has one of the most interesting plot out of any other. This film revolves around the boy named ‘Nello’, who lives with his grandfather and delivers milk from place to place in order to make a living as their financial condition is not good. Nello has a dream of becoming an artist, but he lacks the means to do so. His problems get on increasing when his grandfather passes away and ultimately he has to live his house. Later on, he becomes an apprentice of the famous artist and pursues his dream alongside his dog. 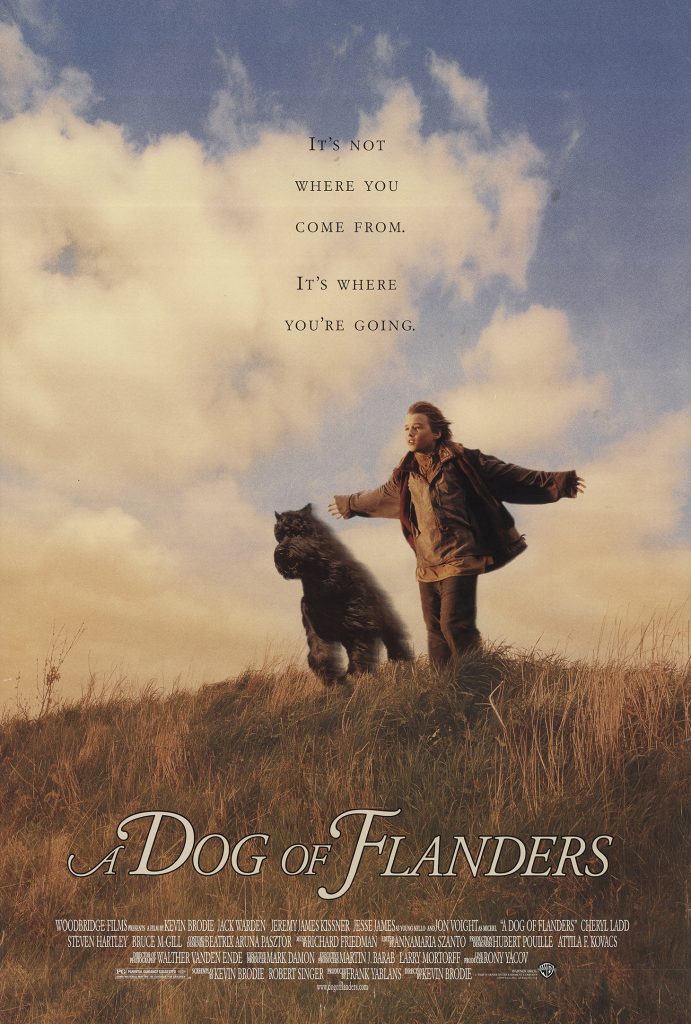 Pets are said to be the ease of humans and give a human being valuable lessons such as caring and how to adore someone. They also take someone’s loneliness. Just like that dogs are more than just pets. They have a deeper impact on the person they were with and they connect the special bond with them. This 2000 film is just based on this idea. The little boy names Wille is often bullied by his colleagues and his peers. But after a while, he gets a dog as a pet and this changed the whole perspective from him and how he viewed his whole world. He realized that he was just living in a small bubble. This is a wholesome movie overall and anyone will enjoy this movie. 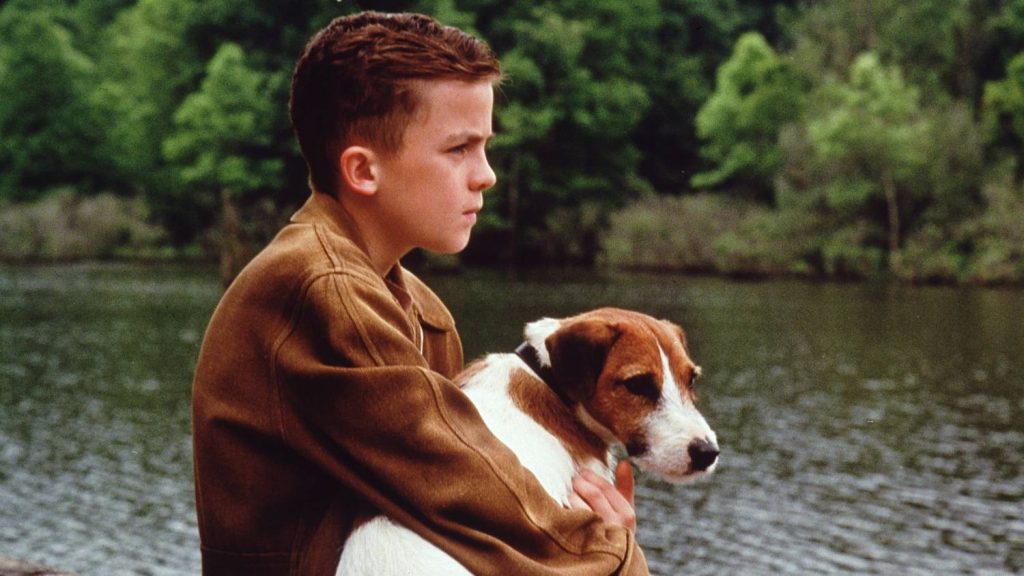 Ten years after TV's favorite serial killer took a break from doing what he does best. He's back! And now...

Are Nora Fatehi and Terence Lewis in Relationship With Each Other?

Celebs Go Dating follows a group of celebrities who are single as they try to find their true love. The...

My Hero Academia Chapter 335: Release Date, Preview & Where To Read