The beauty of high school youth dramas will forever remain unmatchable. So if you need some slice-of-life Chinese drama to reminisce your high school days, here we go! 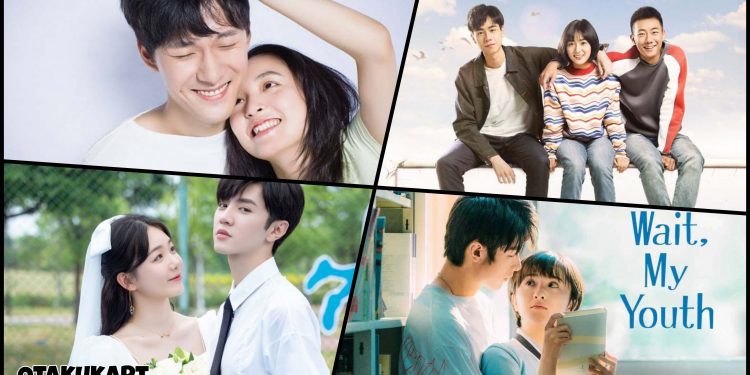 Almost all of us love the feeling of the adrenaline rushing in and our heart beating faster than usual while watching thrilling and mystery dramas and movies. However, this feeling does not compare to what we feel while watching a story with which we somehow end up relating to. Chinese dramas with the coming-of-age theme, with teenagers going through a transition into adults just like us, struggling to make their dreams come true, is somehow so satisfying to watch that we feel our youth being painted on the screen. Not all of us are still close with our high school buddies after completing the higher secondary. Maybe that’s a reason why watching these high school friends in Chinese dramas being friends even after years make the viewers feel so nostalgic as well as happy.

Want to experience a plain and simple life without any smartphone or social media as students where people still enjoy their lives to the fullest? Here are our top eight picks for the best high school youth Chinese dramas that you should definitely watch to relive your old school days.

One of the highest-rated Chinese youth dramas of 2021, ‘Our Secret’ centers on a girl named Ding Xian whose family relocates to a new city, where her childhood family friend, Zhou Si Yue has been living. However, they don’t seem to remember each other and fails to get along well. Their bickering continues even after they become deskmates at school. Although Ding Xian is a hard-working and sweet girl, she is brave when it comes to arguing with the relatively calm, intelligent, but unruly Zhou Si Yue. Little did they know that they will start caring for each other so much that every decision they make will be affected by each other.

‘Our Secret’ is a delightful and coming-of-age youth drama with refreshing lead characters who undergo development as the story proceeded. Thanks to the funny second lead couple, who aid in making this slow-paced Chinese drama watchable even for impatient people.

Well, it’s pretty typical for a Chinese drama to cast the main male lead as the genius know-it-all student who is cold and arrogant while the female lead is shy and clumsy. The only exception that we see here is the guy, despite his good looks, intelligence, and popularity is a kind and helpful person both on the inside and on the outside. That’s the reason our girl, Xia Miao Miao, falls head over heels for him! Miao Miao is a sweet and cheerful person but isn’t very good at studies or is very confident owing to her not-so-attractive looks. One day, when the senior at her school named Liang You Nian helps her with her studies, she realizes how kind and loving he is.

She works hard to become a capable person with the help of You Nian and her friends, Lin Kai Tuo and He Xin, and ends up getting into the same university like his. From a shy and unsmart girl, she becomes a confident girl capable of taking her own decisions. The best part of their high school romance is that Miao Miao is a girl with dreams and not just a girl chasing her crush.

One of the most satisfying Chinese dramas to watch, ‘A Love So Beautiful’ starts off with a typical story of a clumsy and cheerful girl named Chen Xiao Xi who has a crush on her neighbor and classmate Jiang Chen since childhood. He is an ace in studies and is well-known in the school for his tall and handsome looks as well as his cold and aloof personality. Although he openly rejects her love for him, she can’t help but follow him wherever he goes.

When an athletic but loyal swimmer Wu Bo Song joins the school, he becomes a good friend to Xiao Xi and protects her from every trouble she gets into— something which Jiang Chen doesn’t feel good about. The three of them, along with their group involving the funny Lu Yang and the brave but feminine Jing Xiao, take on a journey from being high school buddies to university homies and beyond that.

‘Salute to My Youth’ is a beautiful high-school drama about the bond of friendship, innocent puppy love, and the warmth of having a family. Our protagonist here is a sweet high school girl named Su Can Can who has an infatuation with her classmate, Lin Jia Ze, a polite and good-at-everything guy. However, despite her efforts of being close to him, she ends being the deskmate of his best friend, Lan Tian Ye, who is cold and doesn’t care about things going on around him. All three of them, along with Su Can Can’s best friend Xu Mei Li and her cousin, Tao Ya-Ting develop a strong bond of friendship which thrives even after they graduate from high school and become grown-up adults.

Meanwhile, Can Can continues to have a crush on Lin Jia Ze for seven long years before she understands her real feelings. Just so you know, the visuals of the main leads serve as the chef’s kiss. Viewers have loved their chemistry so much that the director had to cast them in two other drama, one of which is called ‘My Girl’ while the second is still being filmed!

‘Le Coup De Foudre’ is a calming romance youth drama that tells the story of four individuals from their high school days to responsible working adults. However, among many other youth dramas, this is perhaps the most realistic and down-to-earth. Everything begins when two polar apart classmates, Zhao Qiao Yi and Yan Mo become deskmates for the first time, who aren’t even friends. While Yan Mo is a distant but genius top student of the class with a bright future ahead of him, Zhao Qiao Yi struggles to barely pass her classes. However, she lives with an affectionate family of her mother, stepfather, and her twin brother, who supports her despite everything. With time, Yan Mo becomes comfortable with Qiao Yi and opens his heart for her.

They decide to go abroad for higher studies however an unfortunate incident prevents Qiao Yi to do so. She breaks her promise with him and along with it, his heart too. Years later, they cross paths again and whatever happened back then flashes back in their minds. A little tip from us, if you ever feel like skipping any scene, please don’t since the slow-burn romance is definitely going to make your experience a lot better!

A story of pure love and innocence, ‘Forever Love’ revolves around a bright and intelligent high school girl named Xia Lin Xi who is asked to make sure that all of his classmates are regular in their class. That’s how she meets Jiang Zheng Han. His life is nothing like Xia Lin Xi, and struggles with having a good life ahead of him. However, Lin Xi becomes a friend who helps him throughout his most difficult times after convincing him to come back to school. Zheng Han ends up being her tutor for earning some money and ends up falling for her in the process. They attend the same university and discover the depth of their feelings, promising a lifetime together with each other.

However, destiny had something else planned for them, and they end up choosing different paths until one day when they meet again as working professionals. The show is extremely beautiful and compelling for anyone craving a sweet and easy-watch youth drama. The chemistry between the couple is natural, sweet, and heartwarming to watch.

If you are looking for a slice-of-life youth drama, ‘Go Ahead’ stands as a show second to none. Be it the acting performances of the lead cast and their families or the way the show makers have executed the uniqueness of the series, there’s no way you aren’t going to enjoy every bit of it. The story revolves around three individuals who have no blood relations but have grown together in the same household as a loving family. After Ling Xiao and He Zi Qiu are abandoned by their respective mothers, Li Jian Jian’s father accepts them as his own sons and takes care of the three kids along with Ling Xiao’s father, who is busy most of the time with his work.

As they grow older, they experience life’s joy and struggle to adapt themselves to the harsh reality. After the two brothers complete their high school education, they unwillingly decide to live with their family who had abandoned them in the past, leaving Li Jian Jian all alone. The three of them meet again after nine years, only to discover that their loving bond has weakened over the years. Despite the mature theme of the series, it has been balanced perfectly with humor, romance, and delight, letting the viewers have a great time.

One of the most recommended high school dramas of all time, ‘When We Were Young’ is a nostalgic tale about dreams and reality, love, friendship, and family values. Yang Xi is a happy-go-lucky girl who excels in the long-distance run but other than that, she is just an ordinary girl. While chasing down a bicycle thief, she gets injured by a lab explosion which prevents her from participating in a long-distance run. After getting better, when she goes back to school, she realizes that the culprit behind the lab explosion is none but a new student named Hua Biao, who has filled in her position as the class president.

A gifted genius and a hot-blooded and rash boy, Hua Biao’s existence in the school, isn’t welcomed by his peers. However, the more time passes, the more he becomes everyone’s favorite, and he readily comes for everyone’s help when they are in need. Not only is the story funny and sweet but also indeed beautiful and very realistic. It showcases how growing up comes in a flash and as we do so, we learn to compromise and accept our responsibilities.

Read: Top Eight ”Comedy K-Drama” That are Funny From Day One!

Where Is The First Great Train Robbery Filmed? Locations & Cast