Military Prosecutor Doberman ending has made us feel different emotions while concluding each character’s story. Although the drama focuses on the revenge plot, it has excellently revealed various sides of the military and diverse stories of soldiers. Some stories wrenched our hearts while others made us sigh in frustration. However, overall, the Military Prosecutor Doberman cast did a great job portraying their characters, especially Ahn Bo Hyun and Jo Ba Ah. Their outstanding on-screen chemistry made the whole drama more entertaining!

Besides the main leads, Oh Yeon Soo (No Hwa Young), Kim Young Min (Yong Moon Gu), and Kim Woo Seok (No Tae Nam) also showcased their exceptional acting skill. Not to forget Kim Woo Seok’s acting as No Tae Nam has given fans emotional rollercoaster riders by the ending of Military Prosecutor Doberman. While keeping comical part, the story depicts different layers of military power. No wonder Military Prosecutor Doberman concluded with a rating of 10.081 for its last episode! Overall, the drama is a perfect blend of comedy, law, investigation, and thriller with a touch of romance, making it more worthy of your time!

The last two episodes were a whole rollercoaster ride for viewers. The drama leads the audience from comedy, action, suspense, melodrama, and finally to victory. So much has happened in the latest episodes, such as No Tae Nam’s suicide attempt, Aide Yang shooting Cha Woo In, the downfall of the Patriotic Society, etc. Nevertheless, the writer did a great job. The drama couldn’t even have gotten attention, but the excellent writing and directing made Military Prosecutor Doberman ending more worthy and intriguing! Eventually, Military Prosecutor Doberman has given different endings to different characters. After all, the drama has wonderfully portrayed various shades of human beings. Therefore, fans can’t help but feel satisfied with the ending of Military Prosecutor Doberman!

Why Does No Tae Nam Try To Commit Suicide?

The ending of Military Prosecutor Doberman Episode 15 leaves so many questions when we witness No Tae Nam trying to commit suicide. He is the same person who used to torture others till they beg for death. However, his own mother has made him walk the same path. Therefore after discharging from the military on medical grounds, No Tae Nam visits Do Bae Man and Cha Woo In. He left letters for them as well as Han Se Na. After reading the letter, Do Bae Man immediately tracks him down, knowing it was actually a suicide note. 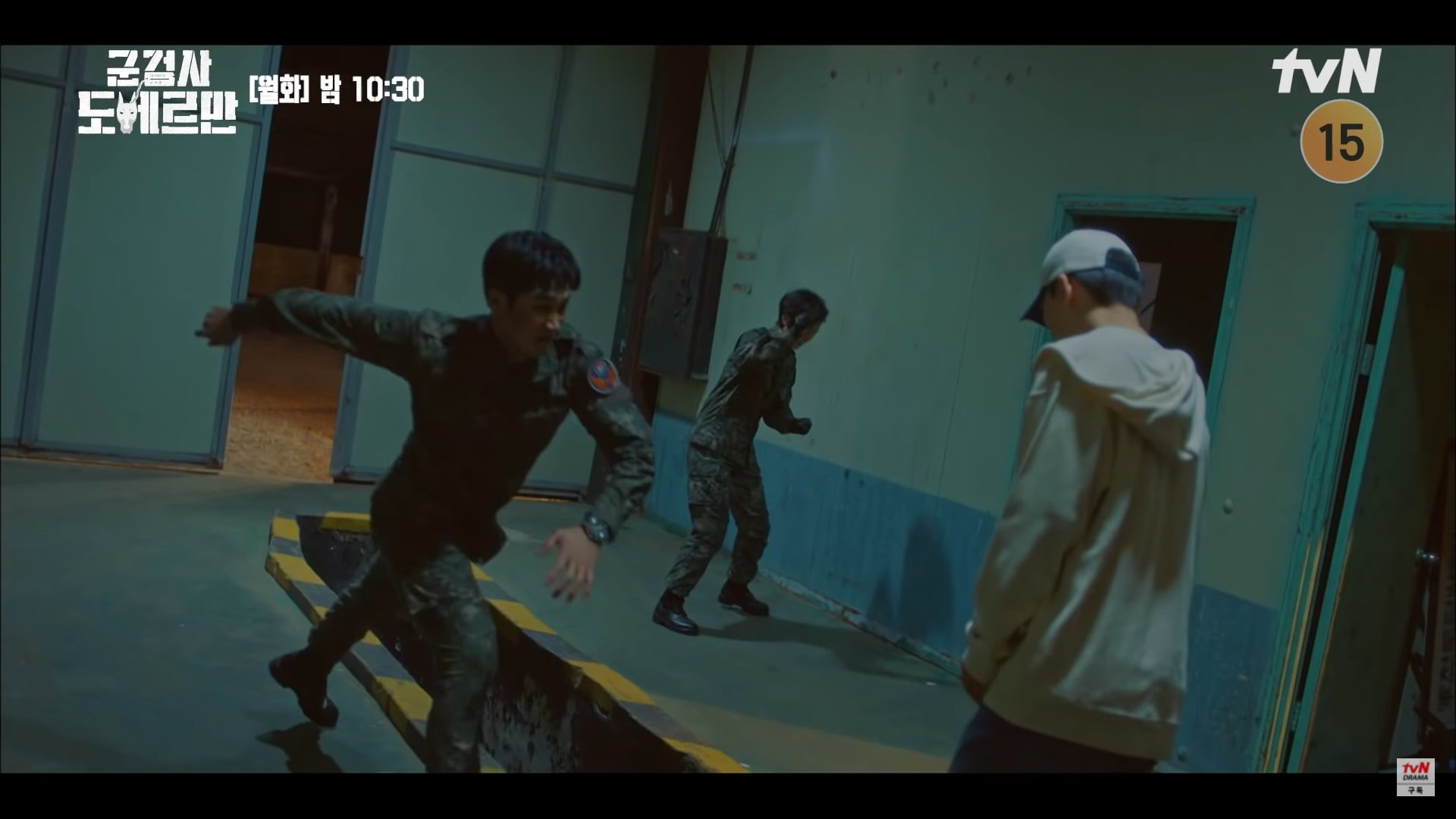 Meanwhile, No Tae Nam calls his mother and asks her to come to the place that holds the most horrible memories of his life. It’s heartbreaking to watch No Tae Nam crumbling down when he apologizes to her mother for being born as her son. Till the end, No Hwa Young doesn’t show even an ounce of motherly love to the poor child who has been craving it his whole life. She doesn’t even budge or tries to protect her son when No Tae Nam removes the grenade’s safety pin. It’s Do Bae Man who throws himself to save him. This is one of the reasons why No Tae Nam tries to commit suicide.

No matter what he did, what he does, or what he will do, No Tae Nam will be a mere tool for No Hwa Young. Therefore, Military Prosecutor Doberman ending explains how the pain, the lack of maternal upbringing, and years of mental and physical torture have turned an innocent child into an empty shell. But thankfully, Do Bae Man saves his life!

What Does Happen In The First Trial? 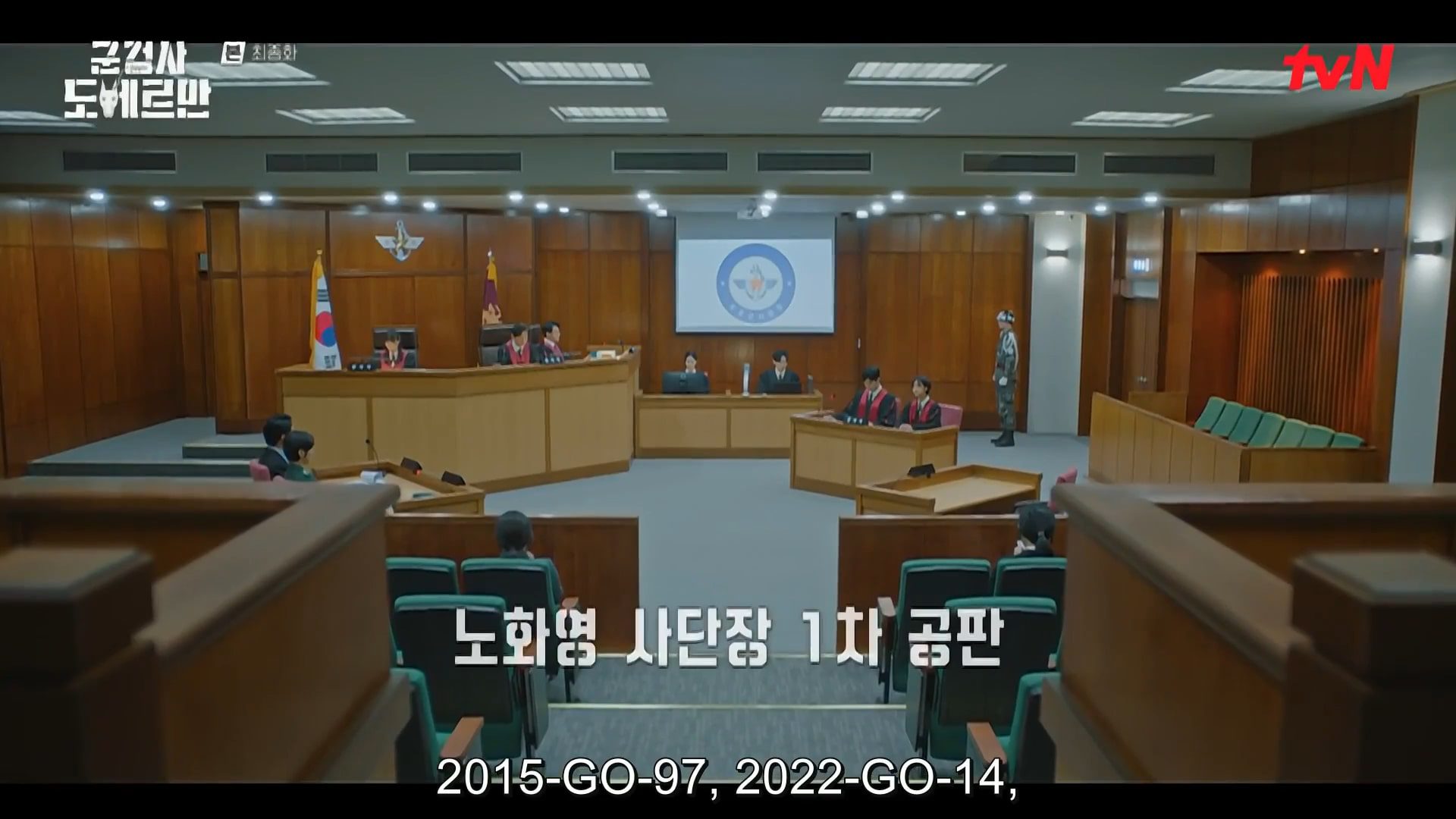 Therefore, Military Prosecutor Doberman ending shows the first trial becomes a more emotional episode. Cha Woo In tries to make No Hwa Young realize how miserably she has failed as a mother. While her son is in a coma, No Hwa Young uses his medical PTSD report to hold her ground. It shows how thick-skinned No Hwa Young has become to gain what she wants! 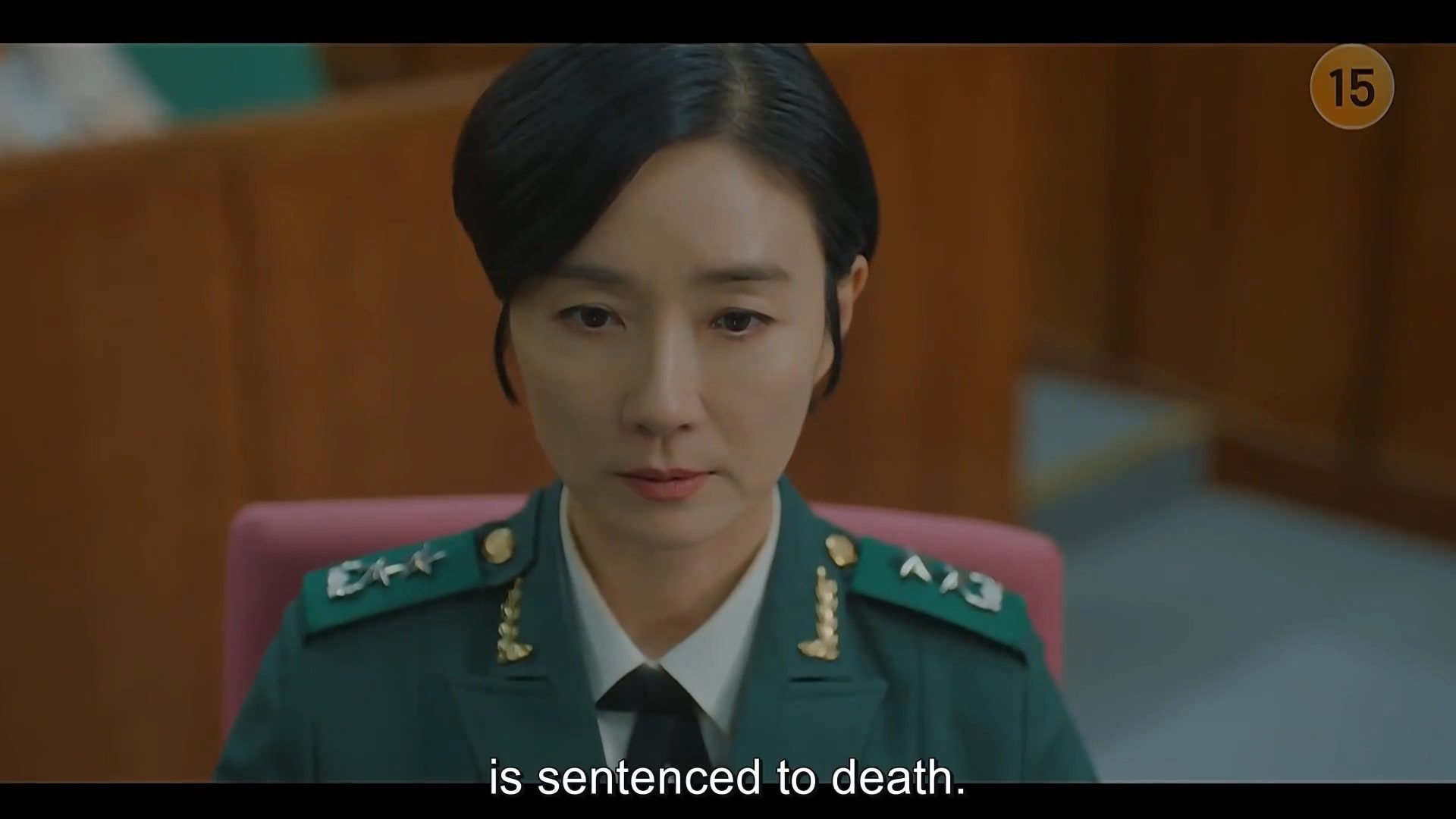 Where Is Everyone After A Year?

After No Hwa Young’s trial, Cha Woo In resigns from her position and confesses the crime she committed as the red-haired girl. This decision she had made years back, knowing she had no right to work as Military Prosecutor. Only because to bring her father justice, she had put the black rob. Therefore, with No Hwa Young’s case closed, Military Prosecutor Doberman ending shows a year gap. Nevertheless, everyone has gotten their deserving ending.

After a year, the drama show Do Bae Man’s auntie Do Soo Kyung and division commander Seo Joo Hyuk are expecting their first baby. At least our lovely couple has got their happy ending! Meanwhile, Kang Ha Joon discharges from prison. After all, he was also one of the parties to the corrupt contract between the Patriotic Society and defense industry companies. However, after meeting Do Bae Man, he informs him that he’s returning to the US to start his life from the bottom. Although both couldn’t stand each other before, now is different. Their last farewell shows much they have grown on each other. 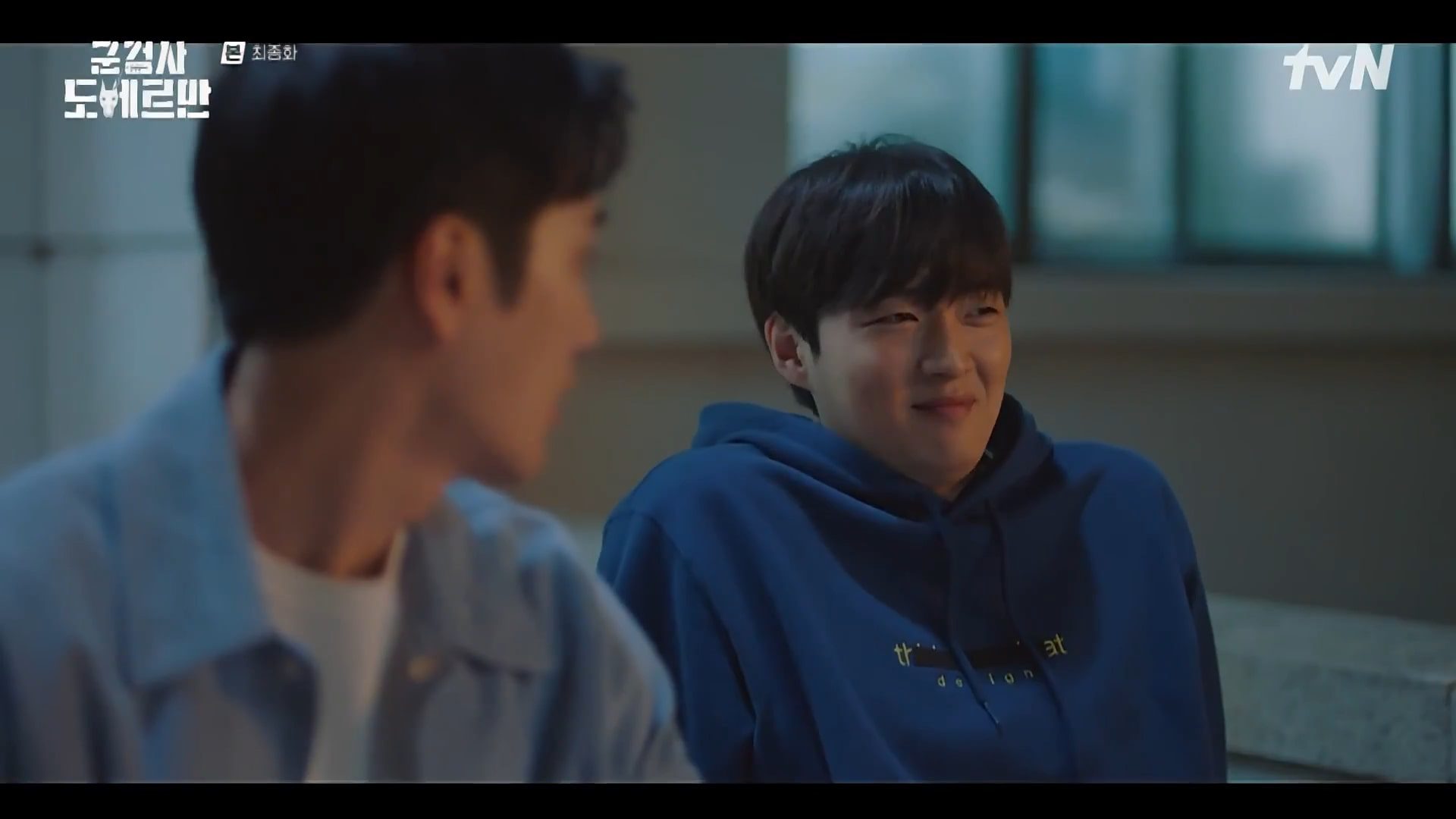 Furthermore, Military Prosecutor Doberman ending also shares how No Tae Nam has started walking down the right path after getting out of a coma. Now, he works as a caretaker at a dog shelter which really suits him knowing how much he used to adore and take care of his dog, Bolt. The ending also shows that he tries to meet his mother, but No Hwa Young refuses to do so. Maybe… Maybe someday No Tae Nam will receive the love he deserves.

A Happy Ending For Our Power Duo

While everyone’s moving on with their lives, Do Bae Man refuses his promotion since he wants to continue working as Military Prosecutor. At the same time, Cha Woo In returns to South Korea and bids farewell to her only friend, Kang Ha Joon. Both exchange their last goodbye before parting ways. By the ending of Military Prosecutor Doberman, Cha Woo In, once again, encounters Do Bae Man. However, this time she meets him not as his co-worker but as a woman in love. Finally, the two seal their happiness with a sweet kiss! 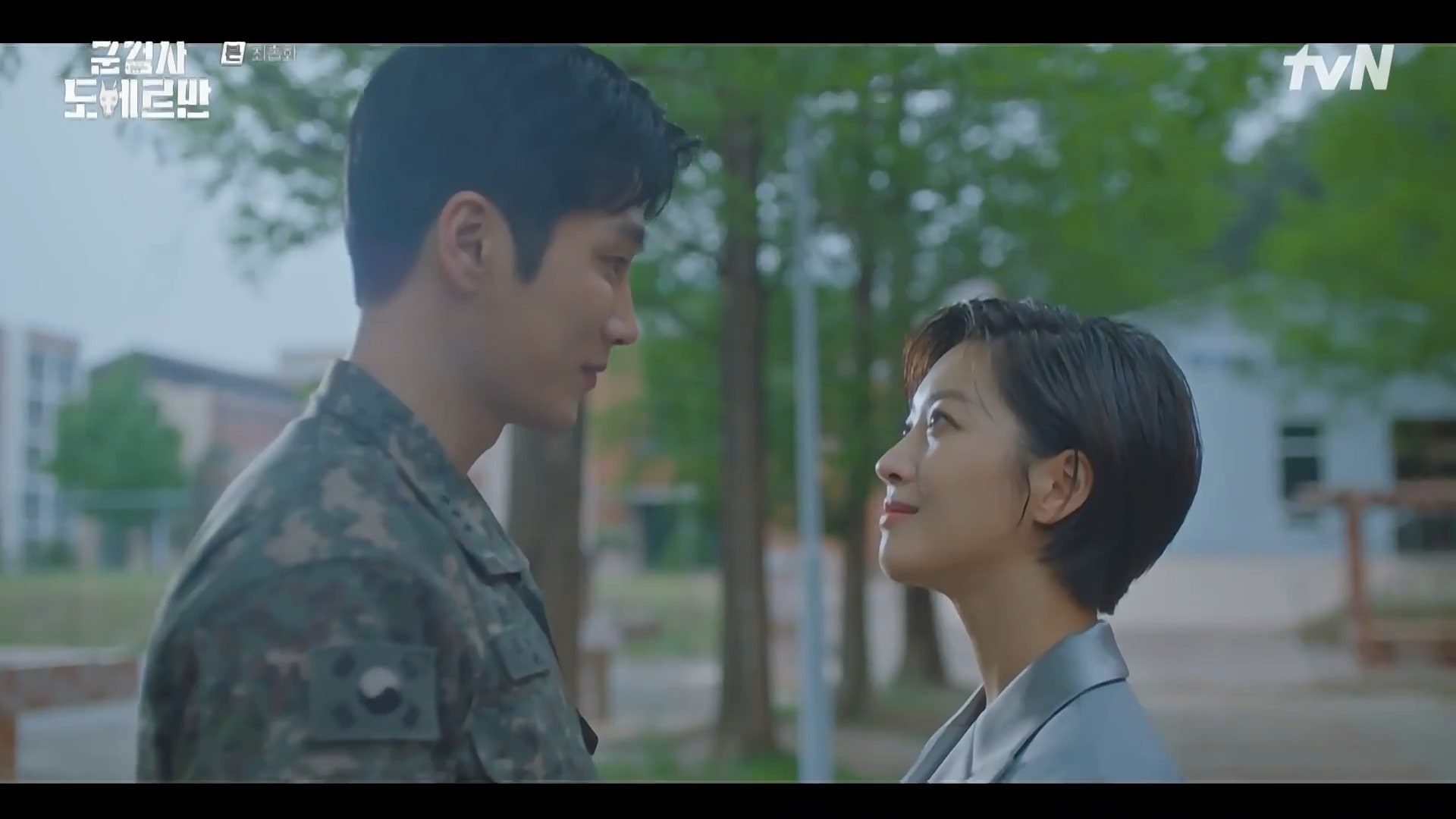 Military Prosecutor Doberman ending depicts that no matter how horrendous a crime one commits and tries to hide for years, the truth will always surface. In the end, power hunger can lead one to their self-made destructive hell!

Is It Possible To Have Military Prosecutor Doberman Season 2?

The kdrama has concluded with a sweet and happy ending. However, fans are wondering about the possibility of Military Prosecutor Doberman Season 2. Unfortunately, the writer or director hasn’t announced anything about the next season. Also, considering Military Prosecutor Doberman ending, it will be challenging to create Season 2. After all, the main storyline revolved around Do Bae Man and Cha Woo In’s revenge plot. Therefore, coming up with a prequel or sequel wouldn’t be possible. Maybe if the writer decides to make a whole new story with new casting, we may get Military Prosecutor Doberman Season 2. However, everything is an assumption at this point. So fans should wait for the official statement from the broadcasting station regarding the second season.

One word:BEST🔥💯Each minute entertaining💯🔥From leads to supporting EVERYONE did their jobs perfectly💯❤️Deserves all the hype🔥Each role was shown to be important on its own in story development💯One of the best thriller mystery of 2022❤️ #MilitaryProsecutorDoberman pic.twitter.com/9LeqGb8fNE