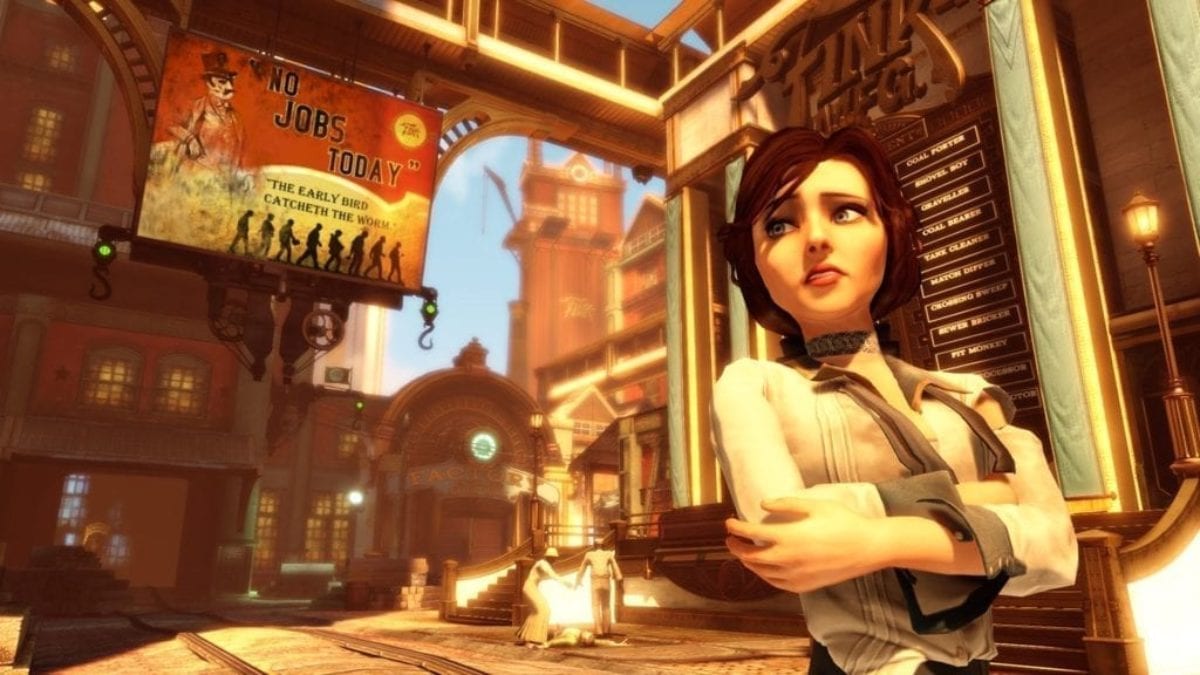 BioShock Infinite Ending was so unlike others that it needs to be explained for people to get the gist. BioShock Infinite is the third title in the franchise that has been developed by Irrational Games and published by 2K. This 2013 game is not a direct sequel to its previous two games. Nevertheless, it does have elements pertaining to them. The game, when released was critically acclaimed for its story, gameplay, setting, characters, and virtual art design. Along with this, the game also received Game of the Year Awards from multiple publications.

BioShock Infinite is set in the year 1912, as we follow the protagonist Booker De Witt. Previously, he was a Pinkerton agent who fought in the Massacre of the Wounded Knee. His objective in the game is to rescue a young woman named Elizabeth. She was held captive in the airborne city of Columbia, where Booker was sent for the mission. Booker can rescue Elizabeth, who later starts accompanying us as an AI-controlled character. During the game’s events, Booker and Elizabeth get close to the various supremacist faction in Columbia. They are the Founding members of the aerial city as they strive to keep their White Privilege.

So while having multiple conflicts with the various extremist groups, Booker finds out how Elizabeth possesses certain powers. She has the innate ability to manipulate “Tears” in the space-time continuum. Moreover, Booker later learns of Elizabeth’s significance to the city’s dark secrets. And also how she may have adverse effects on surface people in the future. 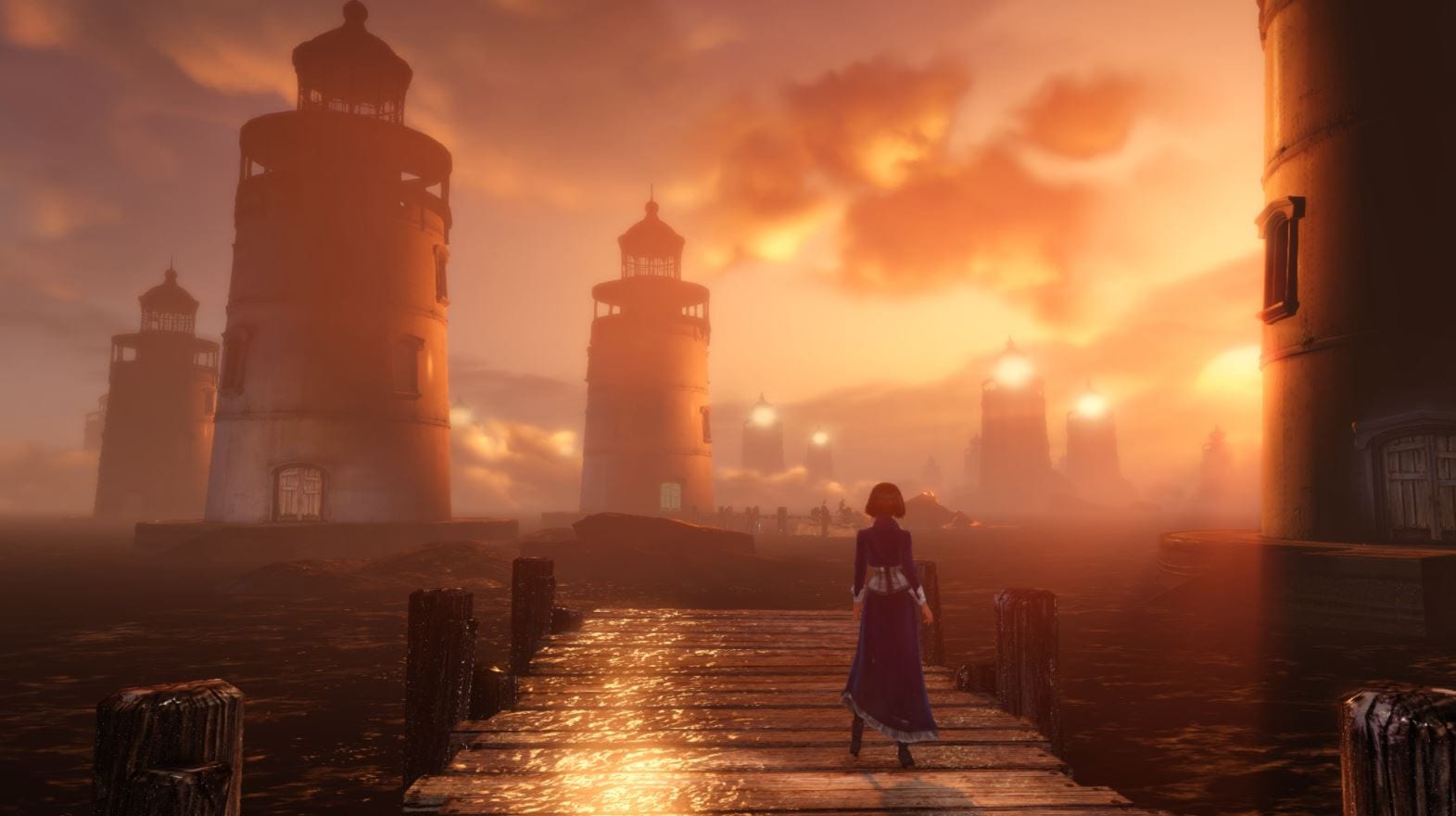 Elizabeth taking Booker to the Lighthouses.

At the ending of BioShock Infinite, when the Songbird gets turned on, Elizabeth is able to tap into the full extent of her powers. She has now become omniscient and has gained knowledge of every possible universe, causing her to know the implications of Comstock and herself to Columbia. While Booker De Witt is Zachary Hale Comstock himself, one possible way to stop the loop of the occurrences would be to have Booker killed during his transformation into Comstock. She is able to see the multiple occurrences where Booker’s character survives to become Comstock. He builds a city and creates a Utopia that inevitably leads to the destruction and downfall of the people in Columbia and New York. Therefore, Elizabeth takes Booker to the lighthouse so that he can realize what needs to be done for the greater good.

Destroying the Siphon had caused the limitations to Elizabeth’s powers to be removed. This has allowed her to see deep into the future and see herself leave Columbia and attack New York as the new heir to Columbia. And the only way which seems to stop these events is to stop them at their origin, which was to stop Comstock’s birth. The nexus event for creating multiple universes happens to be Booker’s baptism after the massacre at Wounded Knee. Here, Booker makes the vital decision to either get baptized and forget his sins or continue his life as Booker De Witt. There are Infinite Universes in Bioshock, all of which originate from the baptism. The Universe through which we players play the game is one of the 123 attempts of the Leteces to have Booker save Elizabeth and prevent any annihilation from occurring in the future.

BioShock Infinite Ending Explained: What are the Multiple Universes?

There are infinite universes that exist within the game. All of these originate from a single event, Booker DeWitt’s baptism. 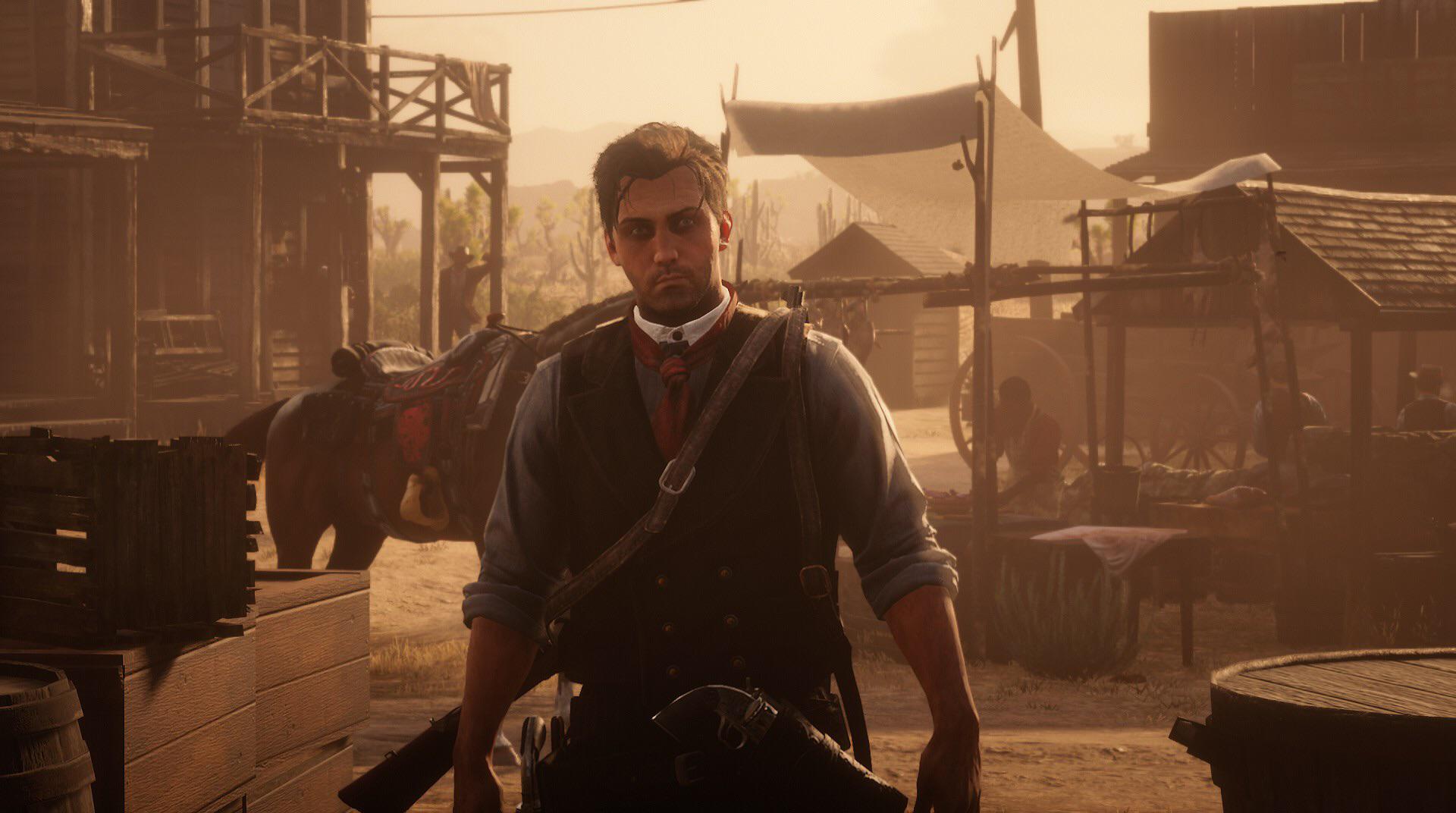 In the reality in which we players play the game, Booker DeWitt had refused the baptism. He lived on with his past fears, during which he had a daughter named Anna De Witt. This is even symbolized by the AD mark Booker has on his hand. Booker developed a great debt due to his gambling addiction. To this, Robert Letece asks Booker to give away his daughter Anna DeWitt, by which his debts will be forgotten. Booker accepts, but as Comstock arrives through the Tear portal made by Rosalind Letece to take Anna away, Booker has a quick change in his mind. He tries to pull back Anna to his dimension, but he fails to do so, severing her pinky finger as the portal closed up. Anna now existed in two realities at the same time, causing her to develop powers. Later, she grows up to be Elizabeth, we know.

Due to these events, Booker goes into depression for the next 20 years, during which he branded AD on his hand as a token of remembrance for his daughter. But now, the Leteces were again dealing with Booker as they wanted him to rescue a girl named Elizabeth from Columbia. Unknowing to him that Elizabeth is his daughter Anna, Booker takes on an alternate form of himself known as Comstock. To Take on such an ordeal, Booker manipulates himself to have alternate memories, one that he assigns as his past. This has only helped Booker stay sane. While Booker and Comstock are the same, both are not connected to one another. This can be noted by how Booker had no idea of what Columbia was. This is so because in Booker’s reality, he did not grow up to develop the sky city. 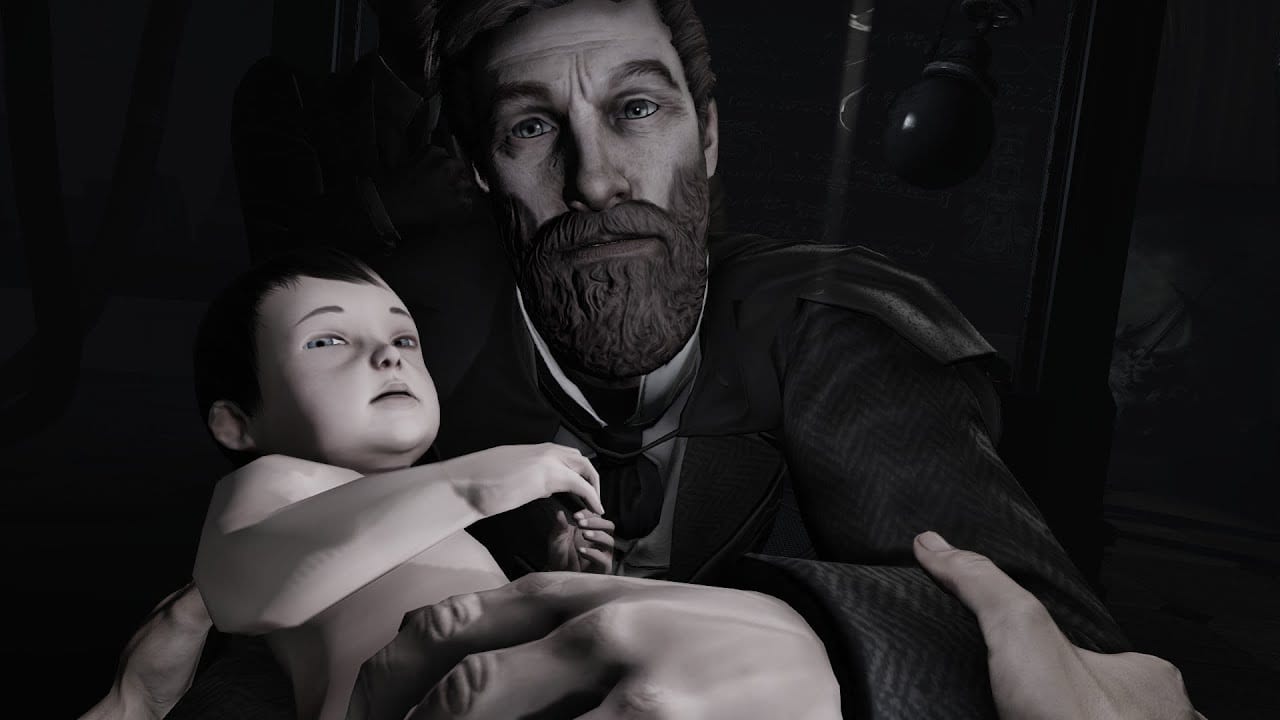 This is the Universe that happens to have come to formation when Booker DeWitt chose to have the baptism. After doing so, Booker had become Comstock, who went on to create the city of Columbia. In this universe, Comstock makes use of Rosalind Letece’s Tears to look into the future. Here, he sees how Booker DeWitt attempts to overthrow him. He also manages to see deep into the future where after his death, his daughter would take over Columbia. Through this, she would attack the surface dwellers as she attacks New York City. But the issue is, through repeated exposure to the Tears, Comstock has become sterile. He cannot have a child on his own therefore, he decides to take it from somewhere else. Comstock makes use of the Tears to retrieve one of his children from the alternate universes.

This is how Rosalind Letece makes contact with a version of herself, Robert Letece. And how Robert arranges for Anna DeWitt to be sent off to Comstock. Here, in this universe, Anna grows up to be Elizabeth, where later Booker arrives to rescue her. This is not the only version of Booker to appear in Comstock Universe. As we see multiple Bookers and Elizabeths throughout the game. These could all be the versions of Elizabeth, who had managed to get back the full extent of their powers in their universe. And now, they had gathered together to put a stop to the cycle.

Also Read: ARK Survival Evolved Genesis Part 2: When Is It Coming Out? 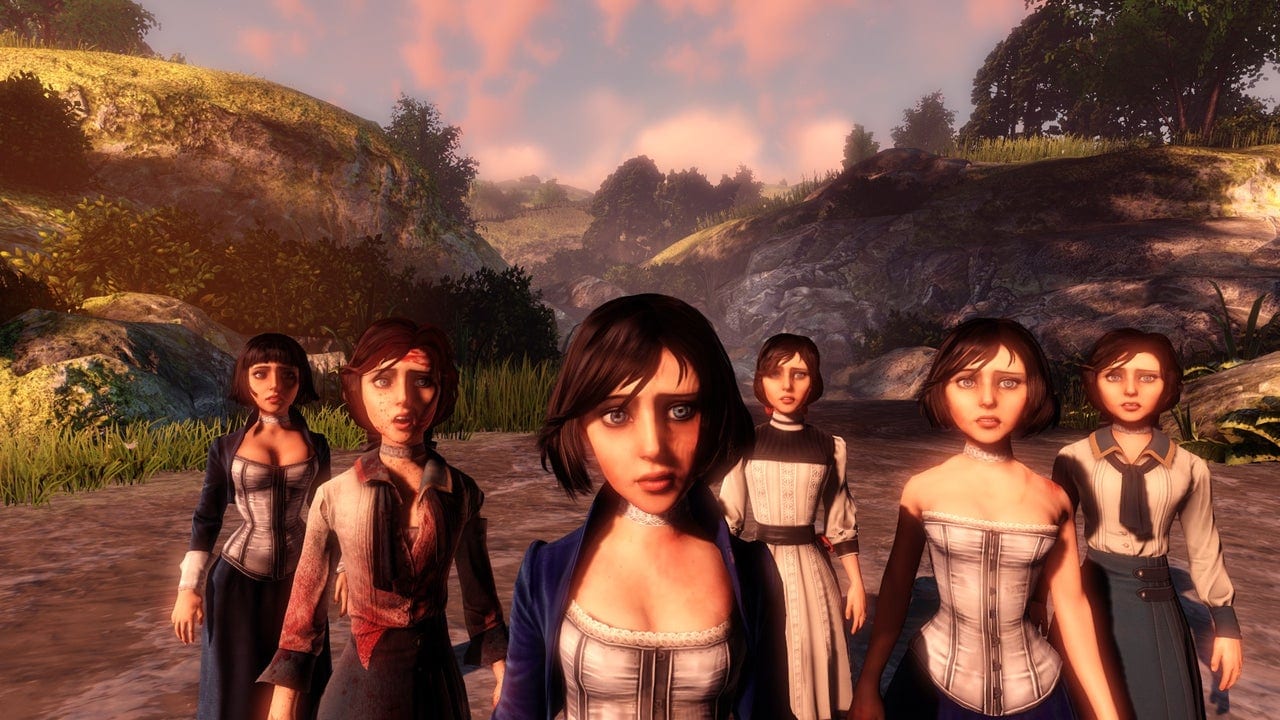 Finally, in the ending of BioShock Infinite, we see many Elizabeths. These were all the Elizabeths who had attained full control of their powers. And had come together to put a stop to Comstock’s exploits. The Booker from his Universe realizes that he was, in fact, Comstock. The objective was to disrupt the origin of Comstock, thus stopping him from ever creating Columbia. Three Elizabeths start to drown Booker as he accepts his fate without putting in much effort. Several versions of Elizabeth start to disappear except for one, after which we see the screen blackout. The ones that disappeared implied that the Comstock conflict had been resolved. But the same can’t be said about the one who remained.

What Happened in the BioShock Infinite Post Credit Ending?

In the Post Credit Ending for BioShock Infinite, we see Booker DeWitt wake up back in his room. He wakes up as he goes to Anna’s nursery and calls out to her. But before we could see if she was inside her crib, the screen blacks out, leaving the topic for interpretation. It could be that this was a version of Booker DeWitt remained as himself and also managed not to give up his daughter. This could be a mirror for us players to reflect on the fact that Booker drowning to death wasn’t inevitable. There was a method through which Elizabeth and Anna could have lived happily together.

Also Read: BioShock 4: Will It Be Playstation Exclusive?