Classic, old-school K-dramas have a whole different vibe which makes you wanna come back to them from time to time. Let's find out the best ones among them! 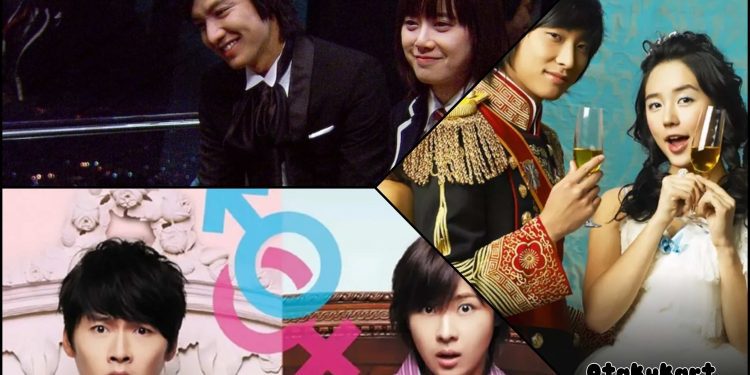 While the world is currently enchanted by K-magic, most of them are still ignorant of what shows and movies used to attract the masses back in the day before the eras of ‘Goblin,’ ‘Descendants of the Sun’ ‘Train to Busan’ and ‘Crash Landing on You’. Of course, we are not talking about ‘Boys Over Flowers’, which serves as the K-drama that has introduced thousands of people to the Hallyu Wave. While the shows currently produced by the Korean entertainment industry is top-notch with great direction and story-writing, there is something about the old-school K-dramas that still attract millions of people. No matter how much we love the new Korean dramas, the classics just hit differently.

Here are the top eight best old-school K-dramas that may end up giving you pure and heartfelt joy. The trend-setters for various K-drama troupes, you definitely should get your hands on some of these older series! Without any ado, let’s get started on it!

A classic youth love drama, ‘Playful Kiss’ is the Korean adaptation of one of the most popular Japanese manga series, ‘Itazura na Kiss’. In spite of being a show that might be very frustrating to watch for modern K-drama fans because of the overly predictable storyline, Playful Kiss has a heartful charm of its own! The show depicts the puppy love story of an unpopular and clumsy high school girl named Oh Ha Ni and her all-in-one perfectionist classmate, Baek Seung Jo. After an accidental kiss between the two, Ha Ni falls crazily in love with Baek Seung Jo and decides to confess her love to him. However, he openly rejects her, saying that he would never like a half-witted girl like her, leaving her completely humiliated.

However, an earthquake shatters the poorly-built house of Ha Ni, and she, along with her father, decides to move into his longtime friend’s house. Surprisingly, the older son of her father’s friend is no other than Baek Seung Jo. Naturally, the situation overwhelms her, and she determines to chase him again but this time, in a well-planned way. However, does that bring about any change in Seung Jo’s indifferent attitude towards her? Guess you have to watch it to find out!

‘Secret Garden’ is a show with the old-school charms of a rich man falling in love with a poor woman and a perfectly well-written backup story. While Kim Joo Won is a rude and arrogant CEO of a company, paying great attention to his nearly perfect image, Ra Im is a poor but beautiful woman. Despite her top-notch appearance, she works as a humble stuntwoman. A misunderstanding makes Joo Won believe that Ra Im is actress Park Chae Rin which give rise to a bickering romantic relationship.

While Joo Won finds himself falling for her gradually, a greater problem awaits for him as he somehow ends up swapping bodies with Ra Im! The show is known for being one of the most hilarious K-dramas of all time, so much that you might need to pause the series in between to give yourself a moment or two to laugh. Of course, that doesn’t change the fact that it’s full of cliché, used in the best possible ways!

When the show makers decide to pair up Lee Min-ho and Son Ye Jin in a rom-com, is it even possible that it doesn’t come out to be interesting! The story revolves around a straight guy named Jeon Jin Ho, who is a cleaning freak and naturally loves things like ironing and keeping objects in their places. Known for his stoic poker face, he is great when it comes to an understanding the feelings of a woman. On the other hand, Park Gae In is a very trustful person but ends up getting betrayed most of the time for believing in things she shouldn’t.

When Jeon Jin Ho applies for being the roommate of Park Gae In, she mistakes him as gay. And… it doesn’t take very long for Jin Ho to fall for his roommate! Sharing a room with a straight guy thinking that he’s gay, well, the storyline seems very cliché (which, of course it is at times), but there is a lot more to the background of the characters. One of the best old-school K-dramas, ‘Personal taste’ should definitely be on your watchlist!

Imagine being an ordinary high-school girl and being able to marry the crowned prince of the country! Well, it’s fun unless you realize your husband is all arrogant and mean to you. Chae Gyeong, a bubbly and feisty girl, gets married unexpectedly to the crown prince to pay off her family’s debts. However, she finds it difficult to adapt to the royal manners and duties of the palace while the cold prince, Lee Shin, isn’t of much help. It’s then that the sentimental cousin of Lee Shin enters into her life who makes Chae Gyeong feel comfortable and becomes the person she can rely on. However, that doesn’t stop her from worrying about the haughty husband of hers!

At one point, you might not even have any reason to continue the show further, but from our experience, you won’t be able to let go of it as well. Well, that’s the beauty of old-school K-dramas! ‘Full House‘ is another iconic series belonging to the category of old-school K-dramas that has been remade and modified into different versions. The story revolves around a struggling scriptwriter named Han Ji Eun, played by Song Hye Kyo, living in a beautiful house named ‘Full House,’ left by her late father. When her best friend tricks her into going abroad for a supposedly free vacation, she comes across a popular Korean actor named Lee Young Jae on her way.

Despite hating each others’ guts in the beginning, Lee Young Jae keeps getting involved with Han Ji Eun in the most surprising and hilarious manner. Ji Eun gets the biggest shock of her life upon returning when she discovers that her house has already been sold and that the owner is no other than Young Jae. They decide to share the house with Ji Eun, working there as a housemaid after a series of incidents. Meanwhile, Young Jae is determined to win back her first love, Kang Hye Won, for which he decided to make a deal with Ji Eun. In order to make Hye Won jealous, he enters into a contract marriage with Ji Eun for six months, after which he is supposed to hand over the house to her. But we all know how contract marriages in Asian dramas end up, right?

Here is the K-drama that marks the Korean trend of cross-dressing in the future K-dramas! A delicious flavor of storyline and aromatic blend of characters, ‘Coffee Prince’ centers on the rich and irresponsible grandson of a big food company, Choi Han Gyul. He’s unable to move on from his first love, Han Yoo Joo, who considers him as a friend only. On the other hand, Go Eun Chan is a tomboy, often mistaken as a guy, and has been the only breadwinner of her family since she was sixteen.

In order to find an escape from the blind dates which Han Gyul’s grandmother keeps arranging, he hires Eun Chan to put an act in front of his grandmother to be his gay boyfriend. When he fails to fix the situation, he opens a rundown old coffee shop to impress both his grandmother and Yoo Joo. Not knowing that Eun Chan is a girl, he hires her as one of his handsome employees to attract female customers while she tries to hide her identity. The drama is a cup of ‘coffee’ for everyone who is a sucker of rom-coms with amazing chemistry!

One thing that you must know about old-school K-dramas is that they are like an addictive drug with some terrible side effects, and ‘The Hiers’ somehow fits the description perfectly! The story arc takes us to the beautiful city of Los Angeles, where Kim Tan and Cha Eun Sang first cross paths. While Kim Tan has been banished by his half-brother to stay away from South Korea and his business, Eun Sang comes to LA with the thought of changing her miserable life by meeting his sister.

However, things don’t go her way, and she ends up alone on the dark streets. Kim Tan, probably assuming he is the Messiah, steps into the scene and provides her shelter. As they come closer, reality hits Kim Tan, who is engaged to Yoo Rachel, the marriage which his family arranges. After Eun Sang departs from LA, Kim Tan fails to forget her and garners the courage to return to South Korea. Surprisingly, Eun Sang happens to be the younger daughter of his family’s housemaid, who is currently staying at his house. The series depicts the turbulent feeling of seventeen-year-olds who are torn between freedom and duties as the inheritors.

We can never let go of this classic rom-com, can we? No matter how many versions come up, with almost the same story and characters, ‘Boys Over Flowers‘ remains unmatchable and Unbeatable! The story revolves around a poor but brave girl named Geum Jan Di who lives with her cozy little family— the owners of a dry-cleaning shop. She ends up getting an opportunity to study at the most prestigious school in the city, where most students from privileged and wealthy families go. As if her time in the school wasn’t already hard that the notorious F4, the group of four most powerful and rich boys, saw Jan Di as their next target of bullying.

F4, consisting of Yoon Ji Hu, So Yi Jung, Song Woo Bin, and their leader, Gu Jun Pyo, leaves no opportunity to bully the innocent students of the school but soon after Jan Di appears, she changes their ways of living completely. The story involves troupes like a love story between a rich man and a poor girl, a heartbreaking love triangle, and evil parental figures, which justifies the old-school K-drama themes.

Cheer Season 3: Will There Be Another Season?