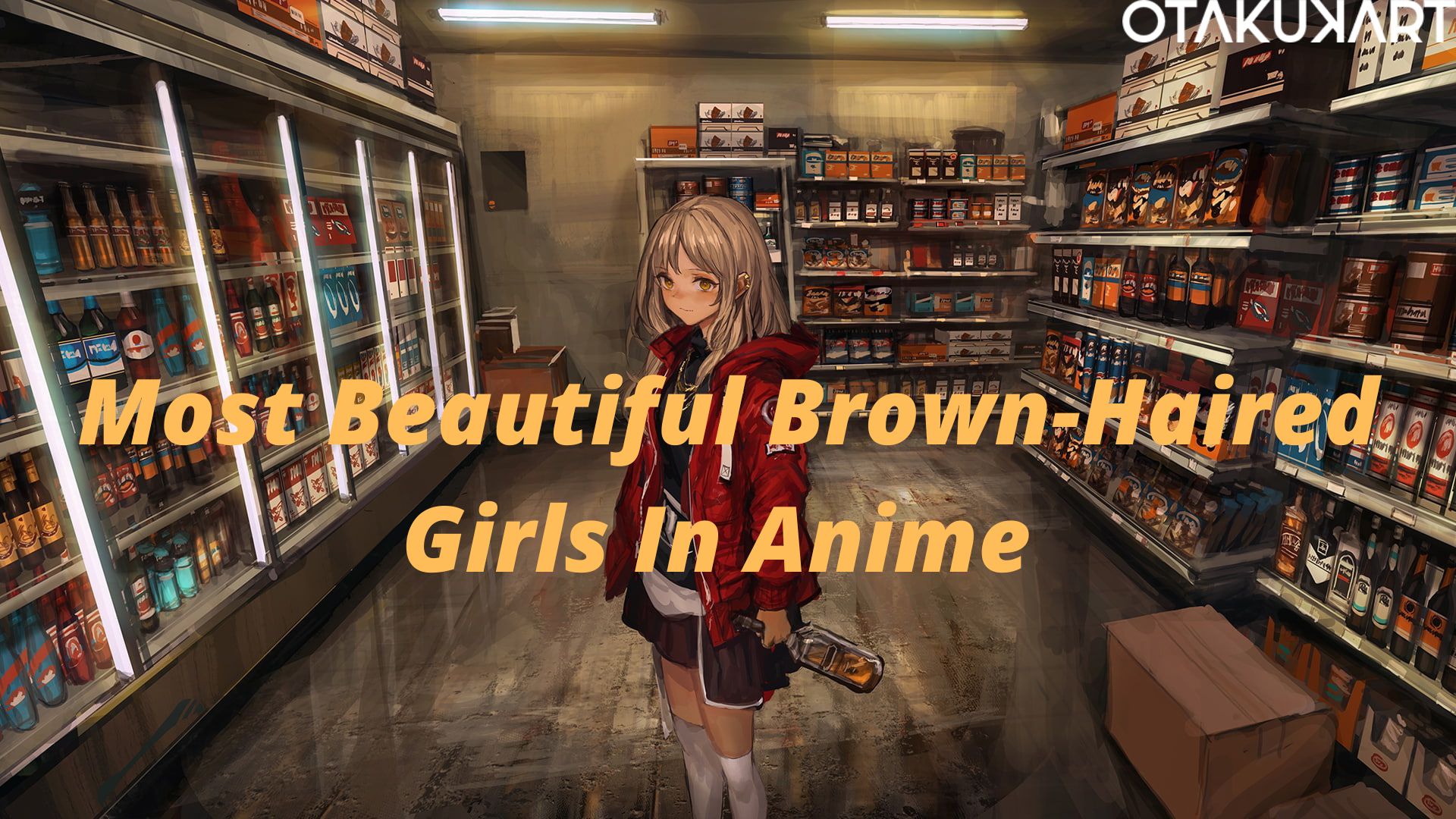 When ‘Why Don’t We’ said, “It took a while to figure out What type of girl that I’m about”. We all felt that. Well if Brown Haired girls of anime interests you. You are just on the right track. Today we will discuss Most Beautiful Brown-Haired Girls In Anime. They are beautiful, Cute, they are the epitome of the ethereal beauty we desire. While people in real life have brown hair too however anime just takes it to a new level. It looks as realistic and better, It looks so good that people wonder what hair care products they use. Actually, I envy them myself!

There are many kinds of characters in the anime world with unique hairstyles. As well as different colors of hair like Pink Hair, Purple, Orange, Red, and brown hair anime girl. Today we will talk about these Brown-haired ones. As you might know that brown is the second most common hair color in humans. Of course, followed by black. Brown hair is pretty common in the anime verse too. However, these characters are not only known for their hair color. They are also famous because of various other qualities they have. Still, their hair color brings them to the waifu list of fans. 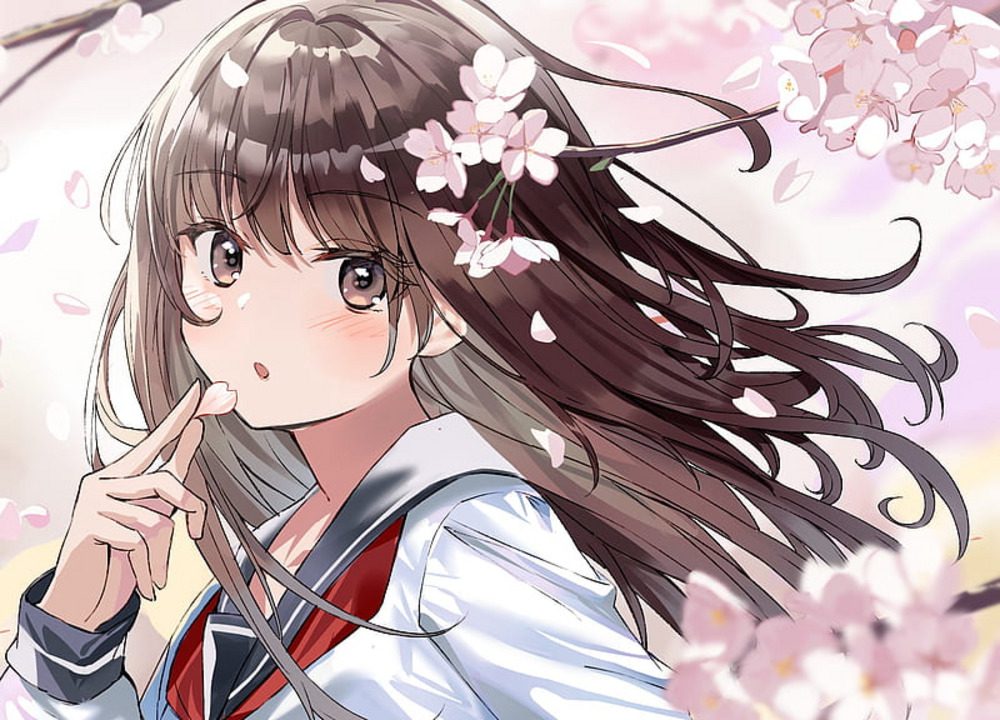 Most Beautiful Brown-Haired Girls In Anime

This list contains 10 of the Most Beautiful Brown-Haired Girls In Anime. Get ready to go on a journey where we celebrate these amazing women. They are fantastic, independent, and feminine. They bring out the much-needed respect for women in reel and real life. Not only do they have brains, but accompanied by beauty. They break the stereotypes and encourage us to do the same. 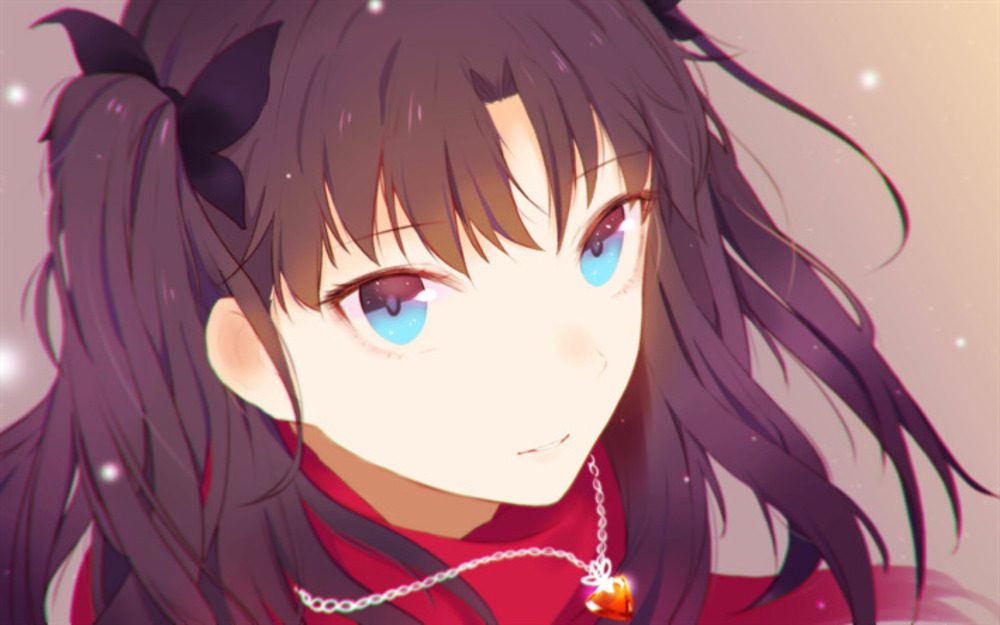 Yui Hirasawa is one of K-ON!’s major protagonists. She is the band Ho-kago Tea Time’s air-headed main guitarist and vocalist. Yui, who is always searching for a good time, is fearless; she has never had worry or stage fright. Hirasawa enjoys all things cute and engages in a lot of physical contact with others, such as hugging or holding hands. She also enjoys all things sweet, so the sweets Tsumugi brings revitalize her. Her physical makeup prevents her from gaining weight, regardless of how much she consumes. Yui can’t tolerate it when it’s too hot or too chilly. To remain cool, she enjoys the winter under the kotatsu and the summer rolling around on the floor in front of the fan. 8. Nagisa Furukawa From Clannad, One of The Most Beautiful Brown-Haired Girls in Anime

Nagisa Okazaki is one of Clannad’s main heroines. Akio Furukawa and Sanae Furukawa are her parents. Tomoya Okazaki is a character in the Clannad Japanese anime series. Nagisa grows even more powerful. It ends in her marriage to Tomoya and the arrival of their sole child. Nagisa is a pretty olive-skinned girl with short wavy brown hair that falls somewhere below her shoulders and big and downward-slanting amber eyes. Moreover, a frail frame; as a result of her poor health and weak immune system. As a result, she is small for her age. 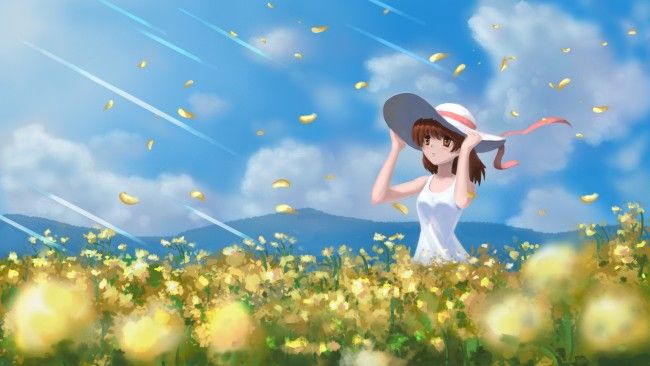 Misaka Mikoto is one of Toaru Majutsu no Index’s main heroines. Toaru Kagaku no Railgun’s main character. In the first book of the light novel, she is introduced. In the third volume, her role in the tale was enlarged. Making her the primary female protagonist of the academic side and the series’ second main heroine. Mikoto has brownish hair and is frequently seen with a little hair clip in her hair. Her eyes and hair are the same hues. She also appears to have a chest problem, feeling inferior around girls with larger busts.

Revy, sometimes nicknamed “Two Hand” because of her dual-wielding abilities, is the series’ main female heroine. She is the Lagoon Company’s primary gunfighter. Revy is a Chinese-American woman in her early to mid-twenties, of average height. She has amber-brown eyes. She has a somewhat tanned complexion. Moreover, she has burgundy-colored (brown in the manga) hair. Which is usually pulled up into a loose ponytail. Accompanied by quite heavy bangs that fall onto her forehead. Revy maintains her physique despite her small frame. A mildly muscular build that she doesn’t hide in the least. Revy seems to have a tribal tattoo on her upper right arm. It extends all the way to her neck. 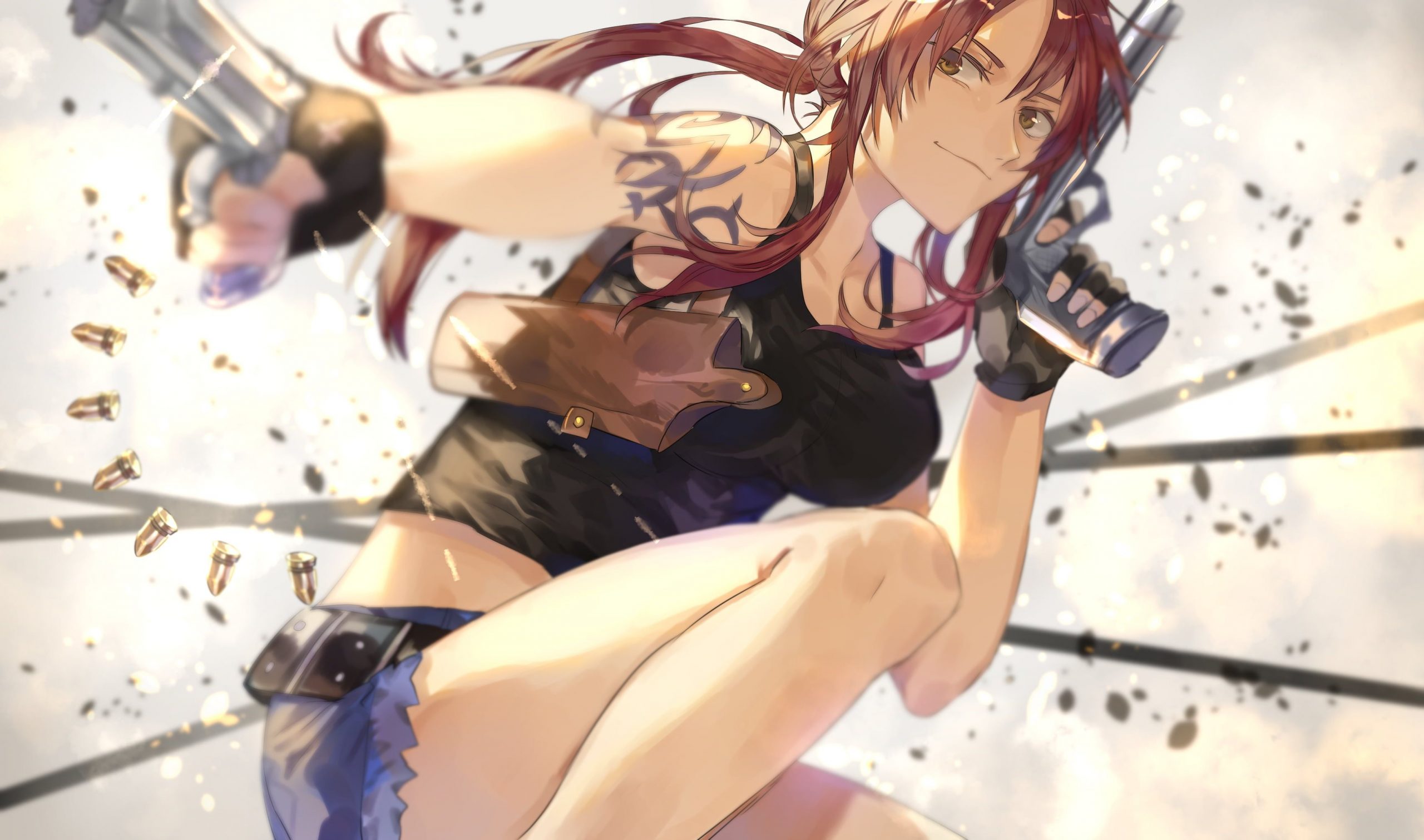 5. Asuna Yuuki From Sword Art Online, One of The Most Beautiful Brown-Haired Girls in Anime

Yuuki Asuna is the primary protagonist of the Sword Art Online franchise. The deuteragonist of the Aincrad Arc. Also, the protagonist of the Mother’s Rosario side story. She is known as Asuna in Sword Art Online, ALfheim Online, and Project Alicization. In which she had temporarily used the Stacia account. She is the child of RECT Inc.’s previous CEO. Asuna was a sub-leader of the Knights of the Blood guild in Sword Art Online. There she was one of the 10,000 players trapped. Her prowess with the rapier earned her the moniker The Flash. Asuna has hazel eyes and long orange-brownish chestnut hair.  She donned a dark red armored garment with a featherweight copper breastplate, leather pants with knee-high boots, and a hooded cape in the early stages. 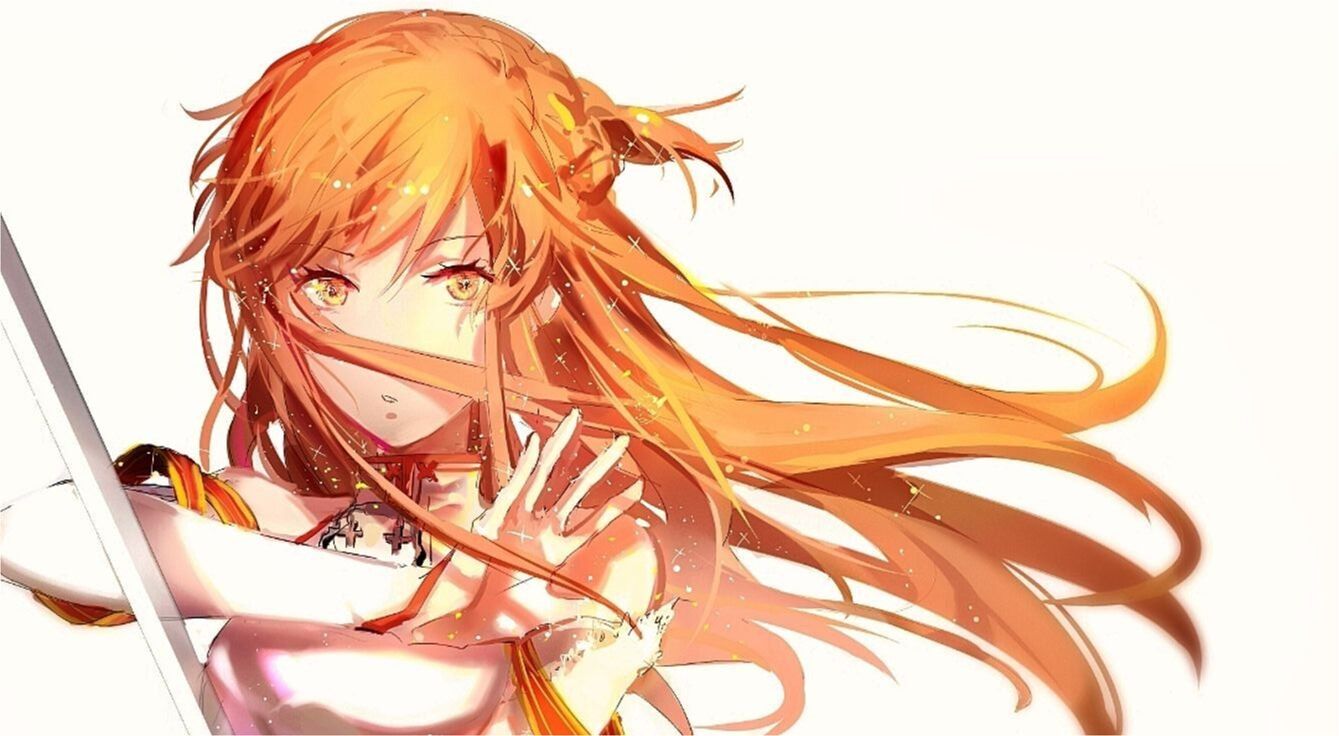 Haruhi Suzumiya is the protagonist and title character of the Haruhi Suzumiya anime series. She is a North High student who leads the SOS Brigade, a group at her high school dedicated to tracking out aliens, time travelers, and espers. She is a weirdo who is usually anti-social and has little interest in “normal” people. Haruhi has pale skin, brown hair, and large brown eyes. Her hair is too long and reaches around her waist at the start of the series. Every day, she wore a different hairstyle. However, after speaking with Kyon regarding her hair, she decides to cut it to just below her shoulders. So, now Haruhi always wears an orange-yellow bandana with bows on the side of her hair after deciding on a hairdo. Kyon is one of many male classmates who thinks she’s gorgeous. 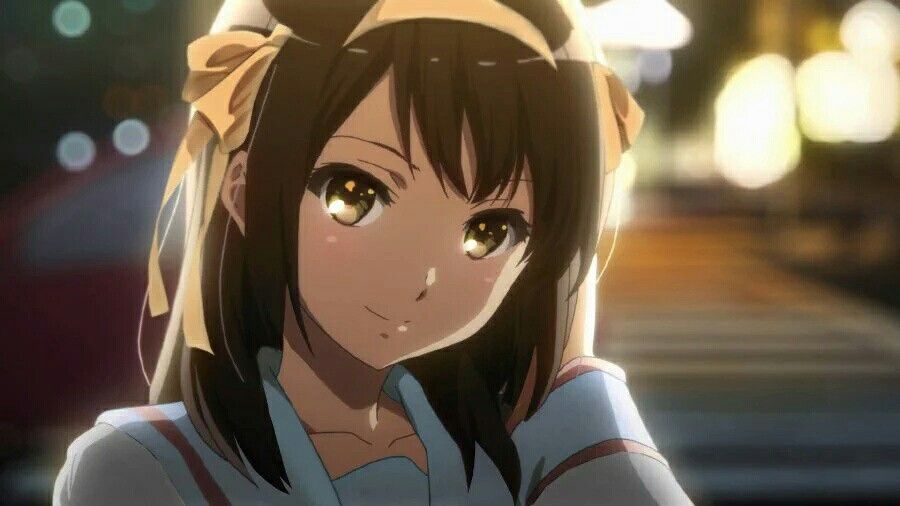 3. Holo From Ookami to Koushinryou

Spice and Wolf’s deuteragonist is Holo. She is a wolf spirit who dwells in the wheat, and she is a nonhuman. Holo can switch between two bodies: one of a big wolf, which is her true form, and another of a human girl. Her wolf form has a physique that is significantly bigger than an elephant’s. Holo’s fur is wheat brown on the upper part of her body and off-white on the remainder. Her scleras are yellow and her eyes are red. Holo appears as a pretty 15-year-old girl having red eyes and flowing white light brown hair that touches her stomach in her human form.

Taiga Aisaka is the Toradora! series’ main female heroine. Her moniker “Palmtop Tiger” comes from her habit of snapping at others in a violent manner and her tiny stature. Despite the fact that Taiga is a teenager, her diminutive stature gives her the appearance of a younger child. Ami taunts her about it all the time. Taiga has long, wavy light brown hair that cascades in waves past her waist, and her father gave her huge, dark amber eyes. She is “flat-chested” and self-conscious about it. However, she often makes up for it with her relentless gaze or threatening comments. Others referred to her as “insanely attractive.” 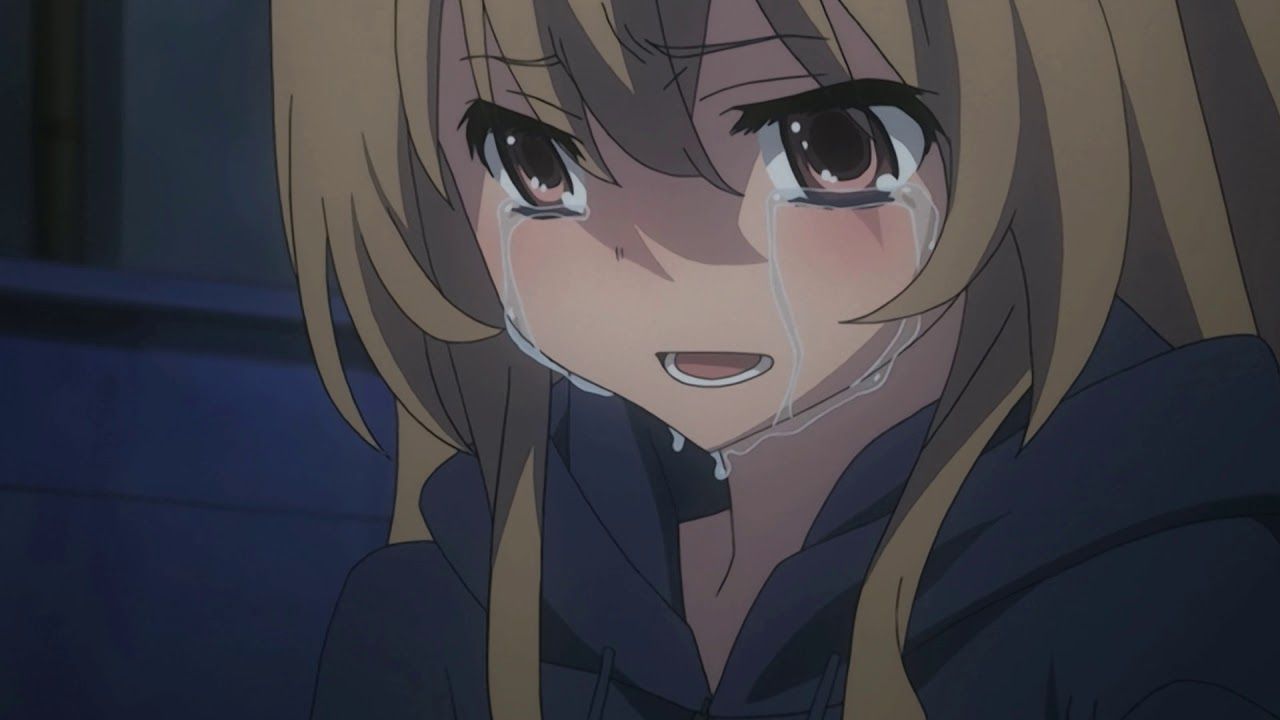 Kurisu Makise is Shouichi Makise’s daughter. She is a brilliant young woman who graduates from college at the age of seventeen and is a member of Viktor Chondria University’s Brain Science Institute and the Future Gadget Lab. Kurisu is a slim young woman with chestnut hair. That falls to her waist and she has pale violet eyes. Her hair, which she prefers to let down, comes in a variety of ginger hues ranging from mahogany to auburn. Kurisu’s hair color in the anime differs significantly from the actual, but only in appearance. Her name includes the word “Kuri,” which means “chestnut,” and her hair color is designed to imitate that of a chestnut. 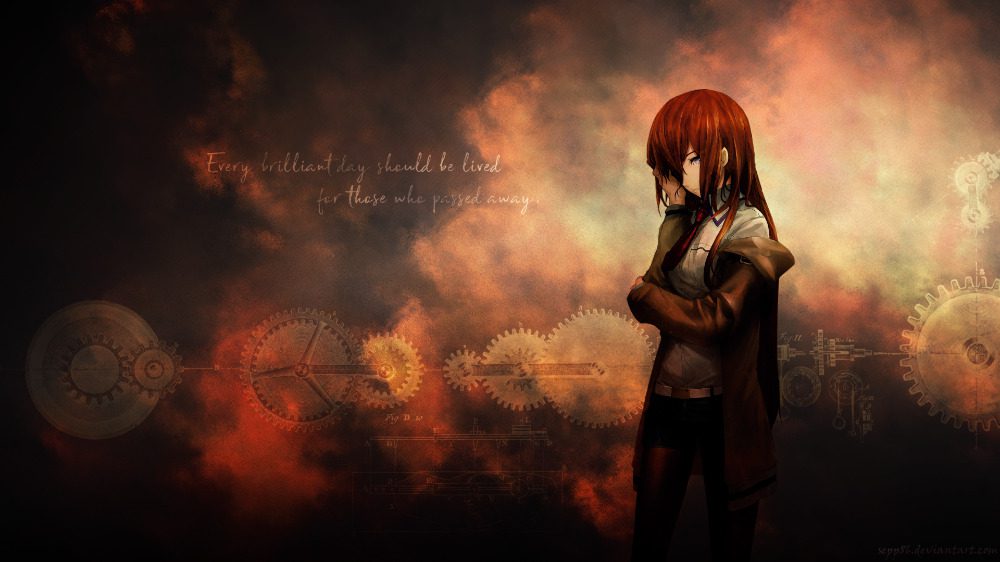